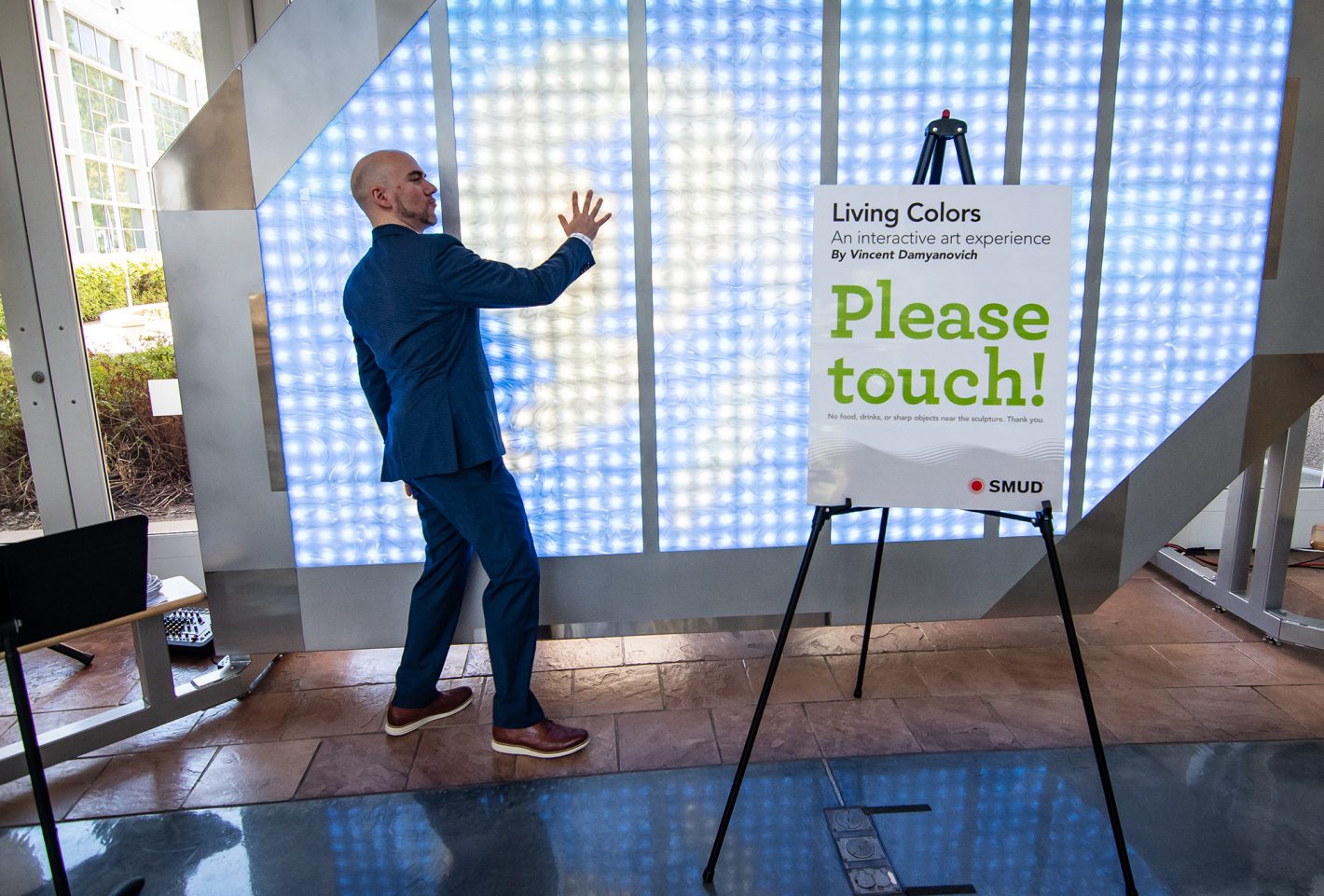 Upon first glance, the recently installed visual piece by local artist Vincent Damyanovich may not seem like much. It’s a freestanding wall of what appears to be textured plexiglass sitting almost sullenly; the slate gray waves formed in the surface of the piece flow into each other, coming together to form a sea of seeming nothingness.

Until you touch it.

In an instant, the dulcet tones of gray burst into free-flowing ripples of color and light. With each microscopic action your body makes, there is a complementary reaction the wall makes; another piece of wavy gray monotony gets replaced with technicolor sparks of light—the veritable visual representation of something from nothing. The magic of connection.

Living Colors is one of the most recent pieces to be publicly revealed as a part of the Creative Economy Grant Program, which was launched by the City of Sacramento in 2017. Presented as an innovative way to make art come alive within the eight districts housed within our city limits, this short-term, half-million dollar investment was meant to act as a litmus test for the long-term benefits of a concerted effort to support, or even boost, our creative economy.

What is a creative economy? It’s a concept first brought into the lexicon by British author John Howkins in 2001, based on the principles that people’s use of innovative thinking will increase an idea’s value. It is a system where value itself is measured on imaginative qualities rather than money, cars, property and the other material things normally uplifted in a capitalist based society. A creative economy is one where the arts, in and of themselves, would experience a modern day renaissance. 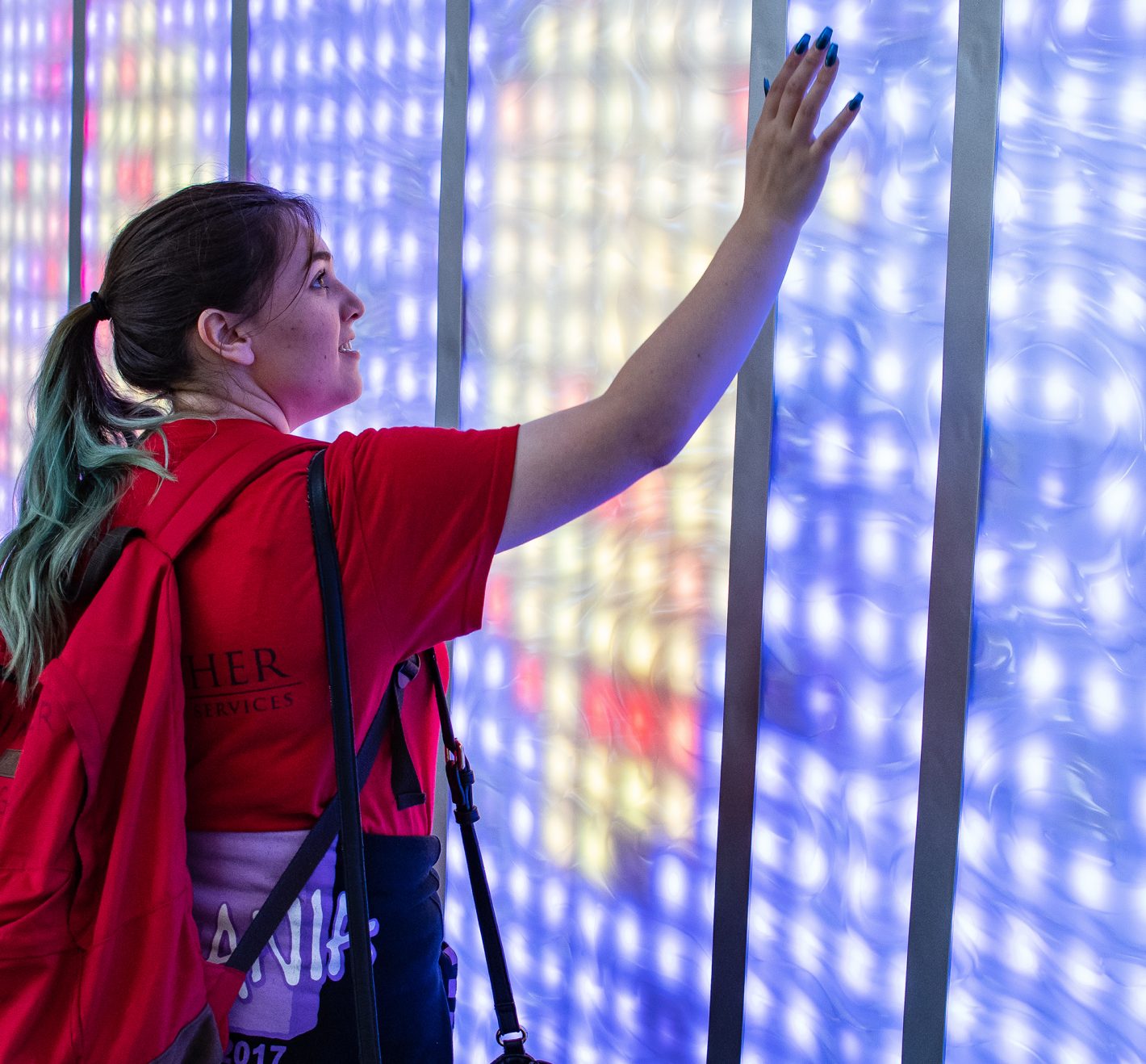 Things like writing, music, theater, dance, performance art, visual effects and the infinite iterations of art that exist would be placed at the forefront of our communities and would take equal footing with the more traditional forms of education, such as science, technology and mathematics.

“Art in public spaces is all about providing cultural enrichment,” Damyanovich tells me a few days after Living Colors’ official ribbon cutting at the main hub for the Sacramento Municipality and Utilities District (SMUD).

“We are just now starting to scratch the surface of what is possible with utilizing art to redefine how we experience ourselves and each other in public spaces,” he says.

Damyanovich, who also owns and operates Vanguard FX Studio, a design house based in Northern California, was so enthused by the city’s investment into the creativity of its citizens, that he offered to match the grant money offered in order to further expand the size and scope of the installation. The buildout of the LED sculpture took a little over nine months, with an additional seven months of logistics work logged. By the end of its journey, the project will have spent time in Natomas, Arden/Del Paso and the College Greens/Tahoe Park area, with the end goal of possibly sparking the minds of hundreds or thousands across the city.

“When people walk away from this project, I want them to know that they each matter,” Damyanovich professes as we discuss the bigger picture of the project. “I want them to get a chance to experience how connecting and showing up and being a part of something larger really matters. That it can, and does, affect the world around them. That’s the takeaway I’m hoping for.”

When speaking on the project at a recent unveiling, Rivkah Sass, CEO of Sacramento Public Libraries, reminded us of all of the weighty emotional connection that art, in all its iterations, can inspire.

“I want to speak to this amazing piece of art, but also to me, what it represents,” she said at a keynote event at SMUD on Feb. 25. “We live in a world where it is increasingly difficult to be literate. And literacy has many forms. There’s financial literacy, there is the simplest form of literacy, learning how to read, there’s healthy literacy—and the role public libraries play to connect all of those together … It’s so important to our future, and to the future of our children. This piece means a lot for those of us who work for [the] Sacramento Public Library. It’s more than just art. It’s science and technology. It’s a feat of engineering. It’s light …”

Living Colors was installed at the North Natomas library on Nov. 3, 2018. Amber Clark, the branch manager during the time of the installation, often spoke fondly on the piece after its installation.

“Amber loved this piece,” Sass recalled. “She loved interacting with it. She loved telling us stories about the people who would come to the library and interact with the piece. Tragically, on Dec. 11 [2018], she was murdered as she left work. Her light was extinguished. So for us, this piece also represents the light of a truly amazing woman who was making everything about our libraries accessible … It represents so much more than just an amazing, creative piece of art.”

Though the technical data for the return on investment of the grant program as a whole is still being analyzed, it is the raw, emotional data that seems impossible to quantify. Over the course of three separate events that took place at SMUD recently, one theme became abundantly clear. It didn’t matter if you were 3 years old, 33 years old, 88 years old or anything between or beyond. If you took a moment to look beneath the surface, to discover the beauty that lies beneath the seeming darkness of the gray waves and connect with what surrounds us, you would discover the magic housed within each of us. Regardless of our age, each of us, even if only for a moment, wants the chance to feel like we have the power to create light in the darkness.

To tangibly create change. That is the transformative power of art, in Living Colors.

Check out Living Colors at the SMUD Headquarters Building (6201 S St., Sacrmamento). For more about Vincent Damyanovich, go to Vanguardfxstudio.com.