Words in the Clay

May Izumi brings her fantastical sculptures to Davis

I take great pleasure in escaping to a fantasy world that I have created in the dark chasms of my mind. Many different forms of media fuel my strange utopia: literature, film, music and in the case of May Izumi—sculptures. A Honolulu, Hawaii, native, Izumi’s sculptures depict otherworldly creatures and figures that peer out from pensive eyes and stand with alluring postures that dare you to come in and look closer. Turns out, Izumi is a lot like me—searching the depths of her mind and referencing the words and illustrations of childhood stories and fairytales to create a world of animal hybrids.

Unlike an illustrator of an intricately woven fantasy, Izumi’s preparation doesn’t begin in a sketchbook with a set of colored pencils and an eraser. She prefers longhand.

“I’m an editor, so I actually write stuff out first. Sometimes it’s just words, sometimes it’s phrases,” says Izumi of her process. “In art school, I got into trouble because I didn’t really have a sketchbook, and they couldn’t read my handwriting.”

Her art education had a rocky beginning. Izumi floated through art classes and found no real connections with her classmates (who were much younger) or with the media involved. After having little success trying to paint, some friends suggested potting. Clay was no different—at first.
“I was a terrible potter,” jokes Izumi.

Most would give up, move on and shoot for a business degree instead, but Izumi continued with clay and realized she was good at hand building. She eventually found her niche in sculpture art after, ironically, she ran out of art classes to take. She went out on her own and did some research, seeking out the work of other figure artists to reference. In fact, some of these artists were alumni of the John Natsoulas Gallery, where Izumi and Boyd Gavin will be showing later this month.

“Most of the people that I admire have work in his gallery,” says Izumi.

Izumi’s work is a combination of a refined color palette, the use of found objects and an attention to the detailed gestures that each of her characters possesses. Izumi ties all these elements together carefully and methodically in order to achieve what others have described as worn and vintage.

“I’m not a big fan of bright colors,” she says. “I don’t know if it’s because I’m a hopelessly conservative Japanese American. I like the worn-out looking colors.”

Her tattered and lonely-looking sculptures have a connection with people who see something of themselves in the scarred, oddly shaped figures. A friend of Izumi’s who had struggled with drugs and spent some time in and out of jail told Izumi that her sculptures looked like “they had a lot of trouble but were still here.” 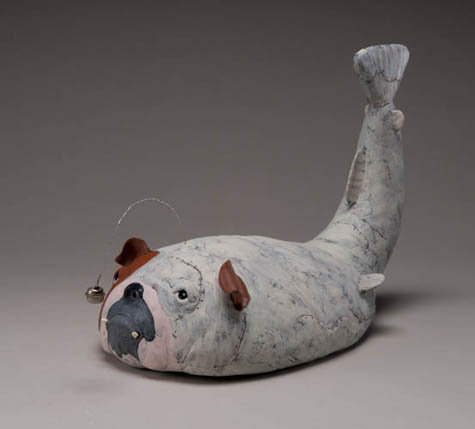 There is a story inside the work that Izumi is trying to tell. It is a story of struggle and of those trying to work their way out of a rut and do better for themselves. It is the message that she has read between the lines and heard in the small and quiet conversations in the halls of the University of Hawaii where Izumi works as an editor for the School of Ocean and Earth Science and Technology. However, it isn’t earth science and oceanography images that she references as having an impact on her work; rather, it’s the people around her.

Izumi begins with a wire frame that she shapes into her skeletal frame. Then, depending on the piece, she might use newspaper to add girth that she then coats in an aluminum foil wrapping. She compares the appearance of her creatures in this pre-clay state as “cryogenic corpses.” The clay she uses is pricey, about $10 for a package roughly the size of a stick of butter, so mistakes can be costly—it usually requires about three or four sticks to cover the entire area of a sculpture. Once that is finished she coats them in sepia ink and then goes over that with the color. This layering process is what gives some of the sculptures the appearance of leather.

The found objects in Izumi’s sculptures also add an extra depth to her work and help the sculptures venture beyond the formation of clay. Izumi salvaged beakers that the university was tossing out, and she used them for a series of pieces that featured endangered and extinct birds. The sculptures were inspired by a show she did with a friend who was working on a project about endangered animals. It struck a nerve with Izumi.

“I find it fascinating that there’s this bird that used to be alive and now it’s gone forever,” she says. “And all we have is this thing in a glass tube to make a new one. I don’t think it will ever be the same.”

For someone who has a full-time job, a limited art education and no real Web site, Izumi has still managed to produce a complete and studied body of work that has all the right components. At 45, Izumi’s future appears bright with her upcoming West Coast appearance and a show planned for next year in Honolulu, where she currently resides. She’s moving at her own pace, a self-proclaimed slow worker; and frankly, it’s worth the wait.

May Izumi’s thought-provoking creations will be on display at the John Natsoulas Gallery in Davis this month along with realist and still life painter Boyd Gavin. The exhibit will run from Jan. 27 to Feb. 20, 2010. An opening reception will be held on Feb. 6 from 7 to 9 p.m.