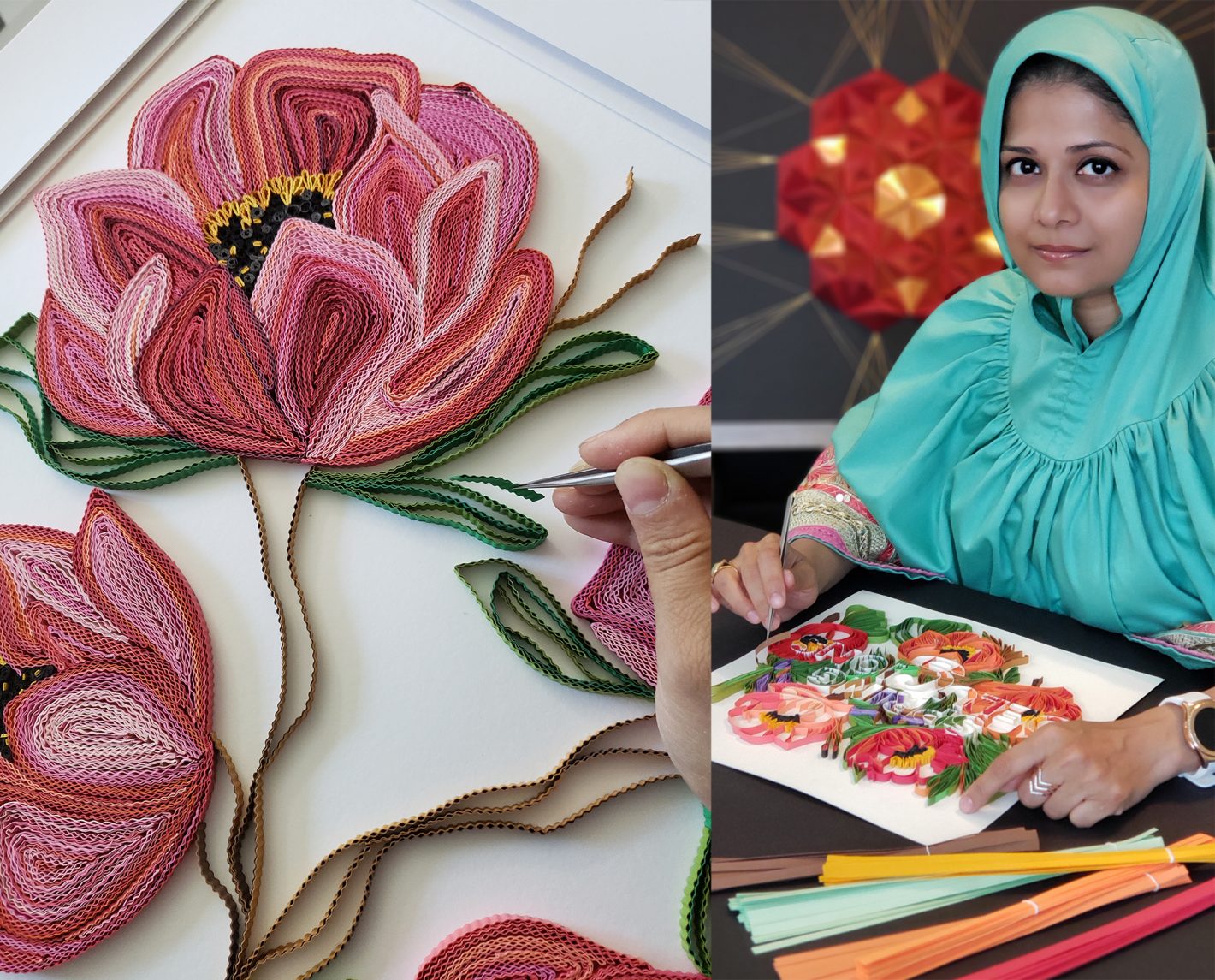 On the inside she is chaotic, unplanned and has a catalog of creative ideas waiting to be set free. On the outside she is calm, cool, collected and truly a humble person. She likes to channel her creative ideas with paper through an art form called quilling.

For having such a “chaotic” mindset, the art of quilling involves meticulous cutting, measuring, rolling and gluing of paper. In the end, each tiny strip of paper comes together to form a beautiful piece of art that is full of texture, depth and can have multiple interpretations. When you first glance at Ammar’s work, it’s almost hard to believe that the entire piece, from top to bottom, is primarily made from cardstock. She is able to create intricate designs, shapes and images that seem they could jump off the board and come to life.

Submerge caught up with this artist, poet and idea-machine to talk about her upcoming solo exhibition at Sacramento State, Spring Delusions. The idea of finding tranquil beauty in a crazy world is a thought that she has been “germinating” on for a long time. Growing up in Pakistan, then moving to Saudi Arabia, then the Bay Area and now Sacramento, Ammar first found her love of chaos as an English Literature teacher in the words of T. S. Eliot.

“I read The Wasteland, and it just bothered me. That book really bothered me so much even to this day, in a good way and in a bad way,” she explained while sipping coffee. “But the more you go over that piece of work you realize that there is so much that he is trying to portray in chaotic matter. 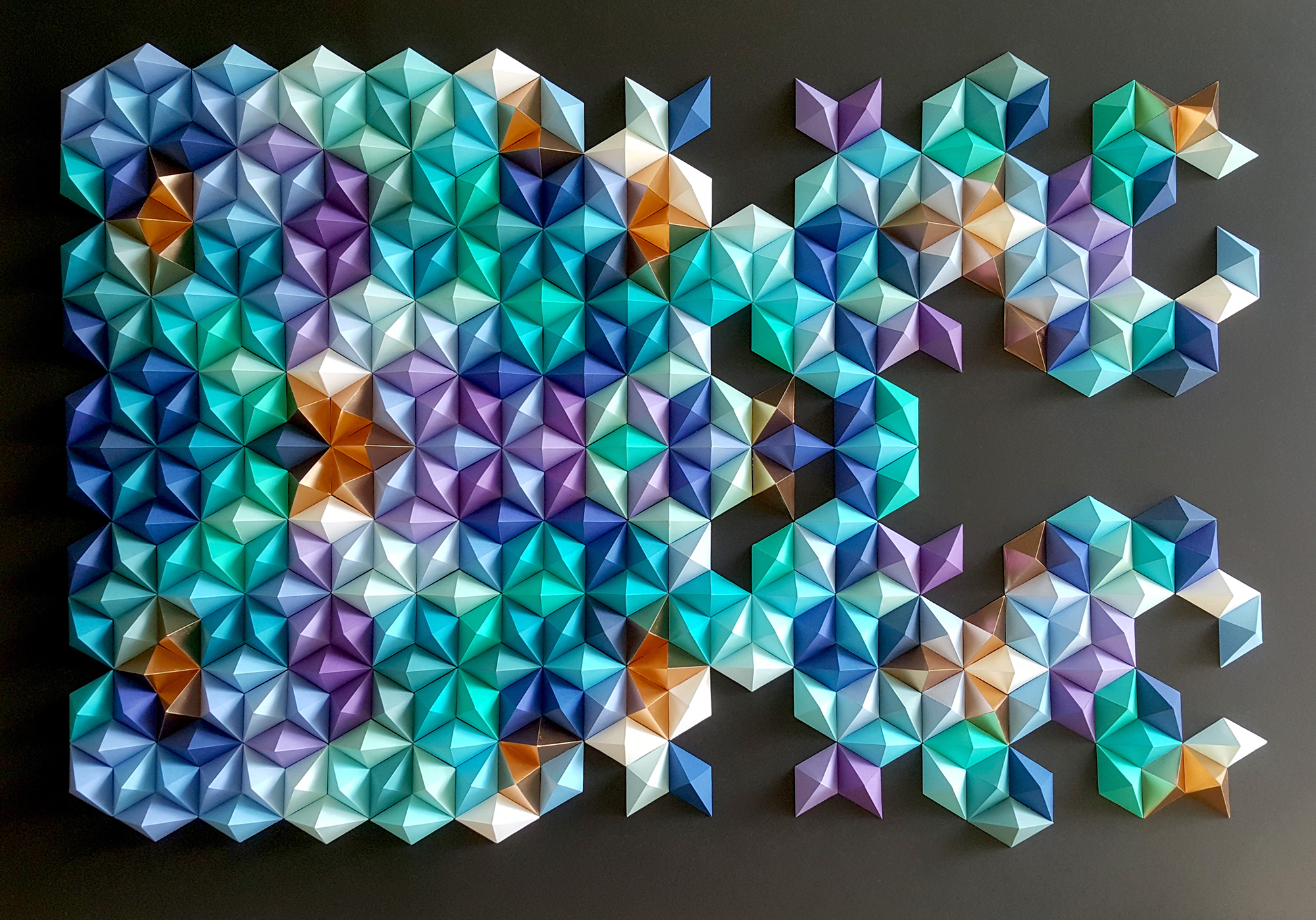 Because you cannot see beauty if there is no contrast. You need to have that emergency that everything is going to wilt away.”

When Ammar moved to the United States, she not only took a big risk in uprooting herself, but she took a big risk in becoming serious about her artwork. All within 2016, she moved to a different country and became a self-published writer with her first book of poetry, also called Spring Delusions. When most people get completely broken down from stressful situations, Ammar gets things done.

“Procrastination is such a good friend that keeps coming back,” she said.

With a Bachelors in Business and MA in English Literature, she decided to take the plunge into the art world and let her ideas with paper run free.

“I really wanted to get into this [quilling], and I knew I had it in me, but it’s such a risk right?” Ammar said. “And you keep hearing it’s really hard to make it as an artist. I had no idea what I was getting myself into.”

Without taking that risk, Sacramento would not have the opportunity to view her colorful and lively pieces. The giant images that she creates are symmetrical and geometric, but still maintain a natural creative flow. Behind these intricate pieces are basic tools: white glue, paper, your hands, and time … a lot of time. These massive colorful creations can take a few days to an entire month to complete. 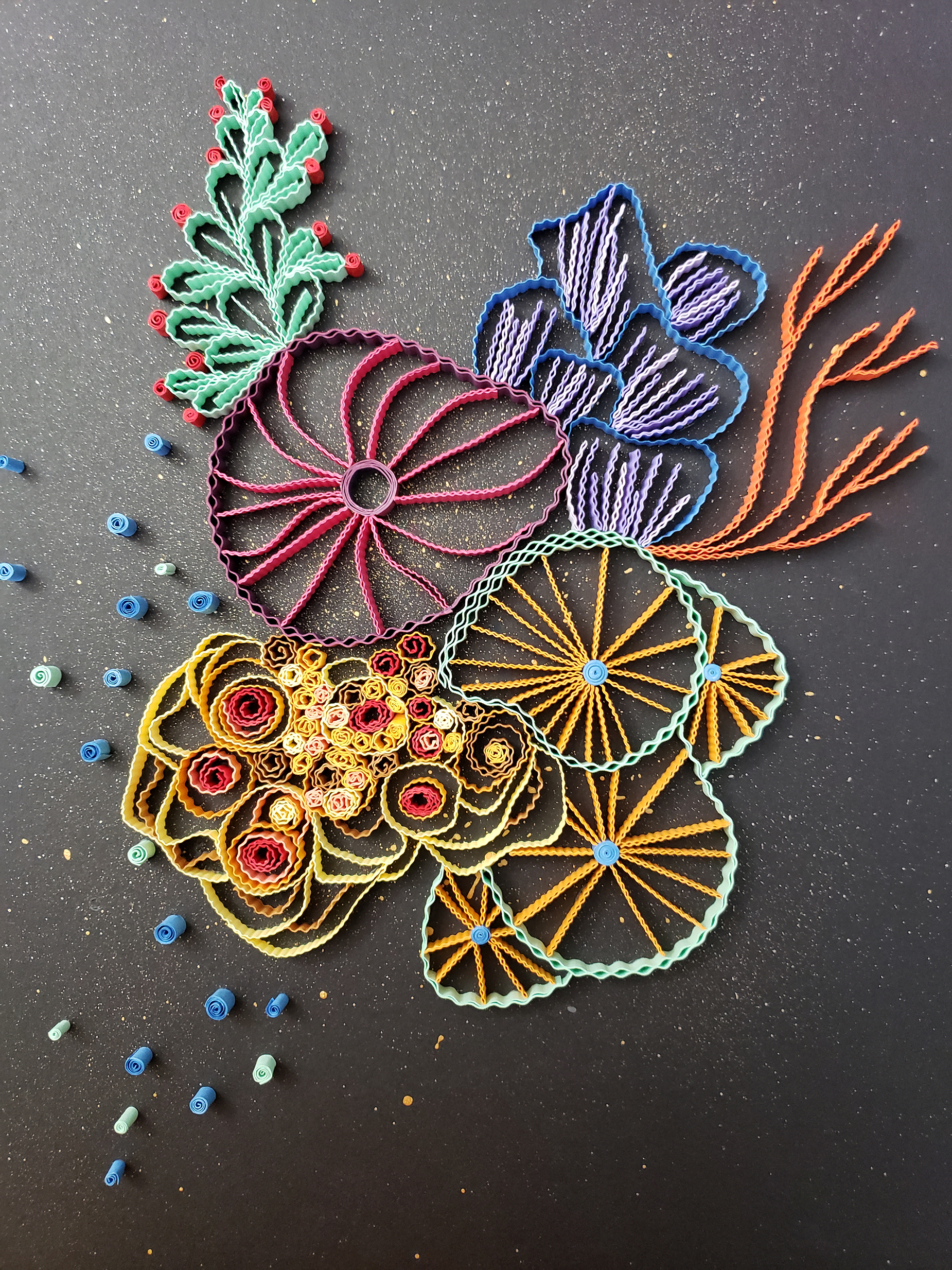 Throughout the years, Ammar has mastered and refined her skill in working with paper, developing her technique, style and skill. At first she started with origami, then moved to geometric shapes and now her main focus is quilling.

“I really can’t be faithful to one specific thing so I keep doing what I feel I want to explore,” Ammar explained.

From creating little paper butterflies on top of presents for her friends and family to creating geometric art that can stand more than 4 feet long, artwork so large she had a hard time fitting the entire piece for an Instragram shot. Now when she is working on a project she “jumps out of bed” from excitement just to get back to work. And she can find inspiration everywhere, even while taking a road trip and looking at shrubs along the highway. 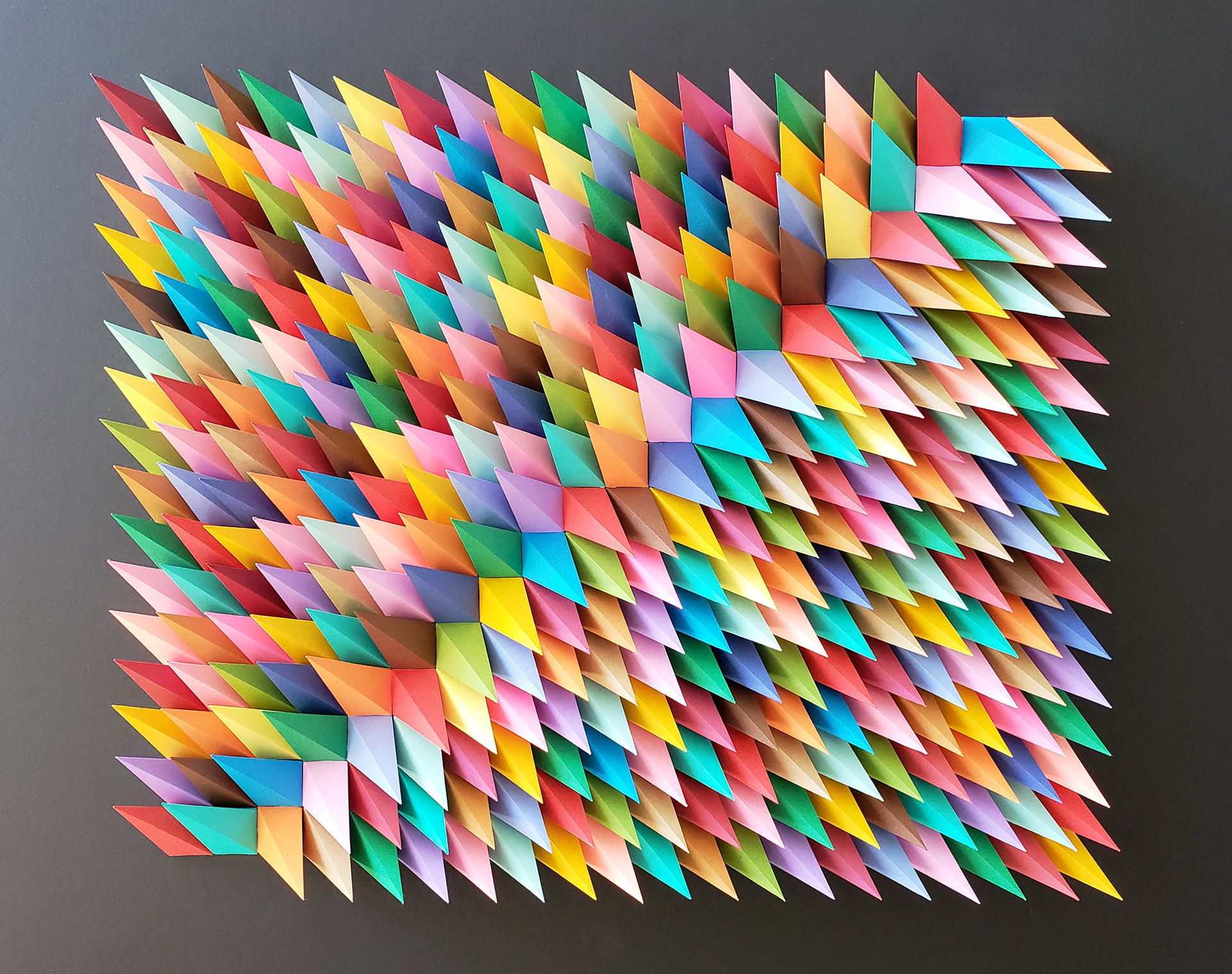 “I usually don’t wait for inspiration. People think that inspiration is something that geniuses only have or something that creative people have but it doesn’t happen that way,” Ammar said. “You have to sit down and do the work and when you are working it’s when ideas are going to creep up. If you don’t pick up a pen nothing is going to flow out.”

But at times Ammar cannot find the right words to flow out onto pen and paper, so she has found art to help express herself. It’s hard to imagine someone who speaks four different languages fluently (English, Gujarati, Urdu and Hindi) would have any trouble finding words to express her creative ideas, but that’s where quilling comes into play.

“It’s things that you cannot put into words,” Ammar said. “At times I’m grasping for words for things that I cannot define. Art does that for you.”

With well over 7,000 followers on Instragam, @zahraammarart is gaining ground with her artwork via social media very quickly. Even though she’s only been on Instagram for the past year, she has made connections with people around the nation, sold art and even booked her upcoming exhibition using Instagram.

She is hoping her artwork will not only last for the Sacramento State exhibition, but to last for years to come. The idea of a paper art being “archival” might seem unlikely, but by choosing to use acid-free and liquid-free papers, Ammar is hoping her work will still be around for the next generation of artists.

“It’s not something that’s disposable; it’s there to last. It’s there to inspire,” she said. 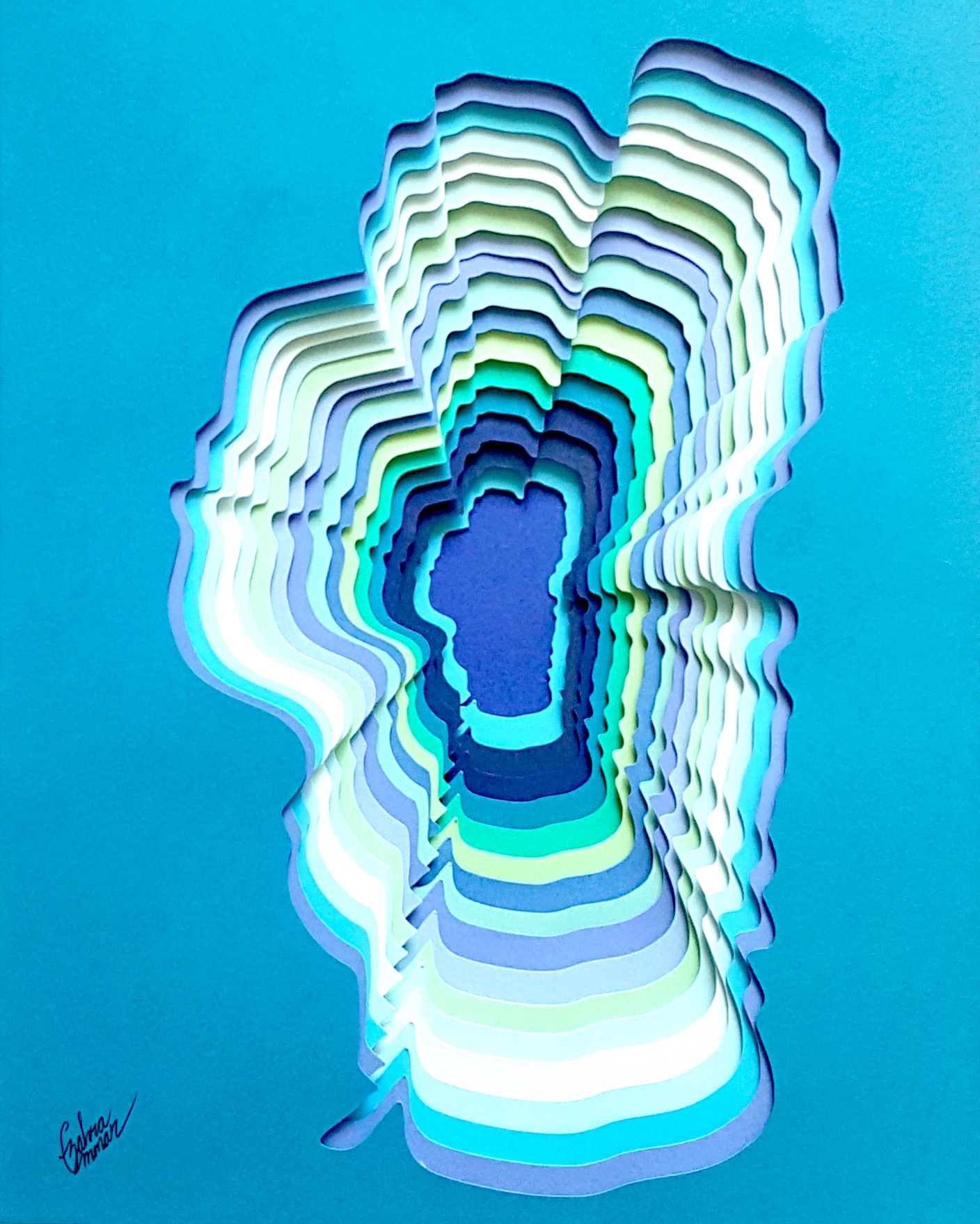 In our world of new, replaceable and expendable, building everlasting art in the 21st Century seems like a challenge, but challenges do not stop Ammar, they only inspire her. She not only hopes to get inspired but hopes to inspire others around her to think or create. It’s not easy for an artist to imagine someone not appreciating their work or even admitting to it, but this young quillist has a different take on any criticism that might come her way.

“And it’s open to interpretation, not everyone has to like my work. I understand that,” Ammar explained. “But even if someone doesn’t like it, that’s a good thing because it’s better than being indifferent. It made the person do something not to like it.”

Not liking or appreciating Ammar’s work seems near impossible. She has created a model brain made out of paper by referencing medical diagrams, created a paper building with detailed architecture features and even a typographical paper cut of Lake Tahoe. Ammar’s pieces are larger than life, imaginative and might even help you find the beauty in unexpected places. 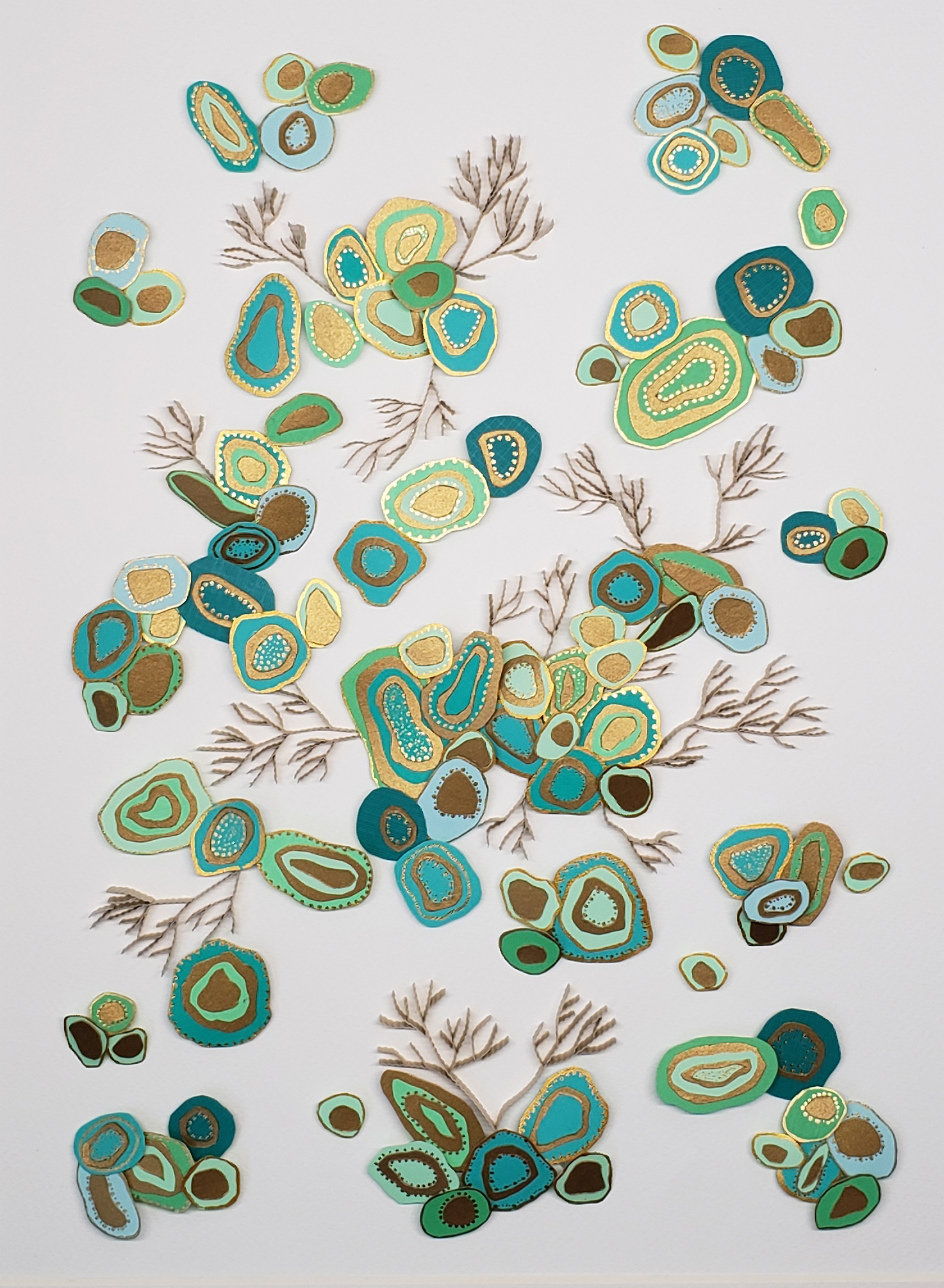 Zahra Ammar’s Spring Delusion exhibit will be shown at the University Union Gallery at Sacramento State from Aug. 27–Sept. 20, 2018. An opening reception will be held on Aug. 30 from 6–8 p.m. The reception and exhibit are both open to the general public. For more info, such as gallery hours, go to Facebook.com/sacstateunion. You can follow Ammar on Instagram @zahraammarart.