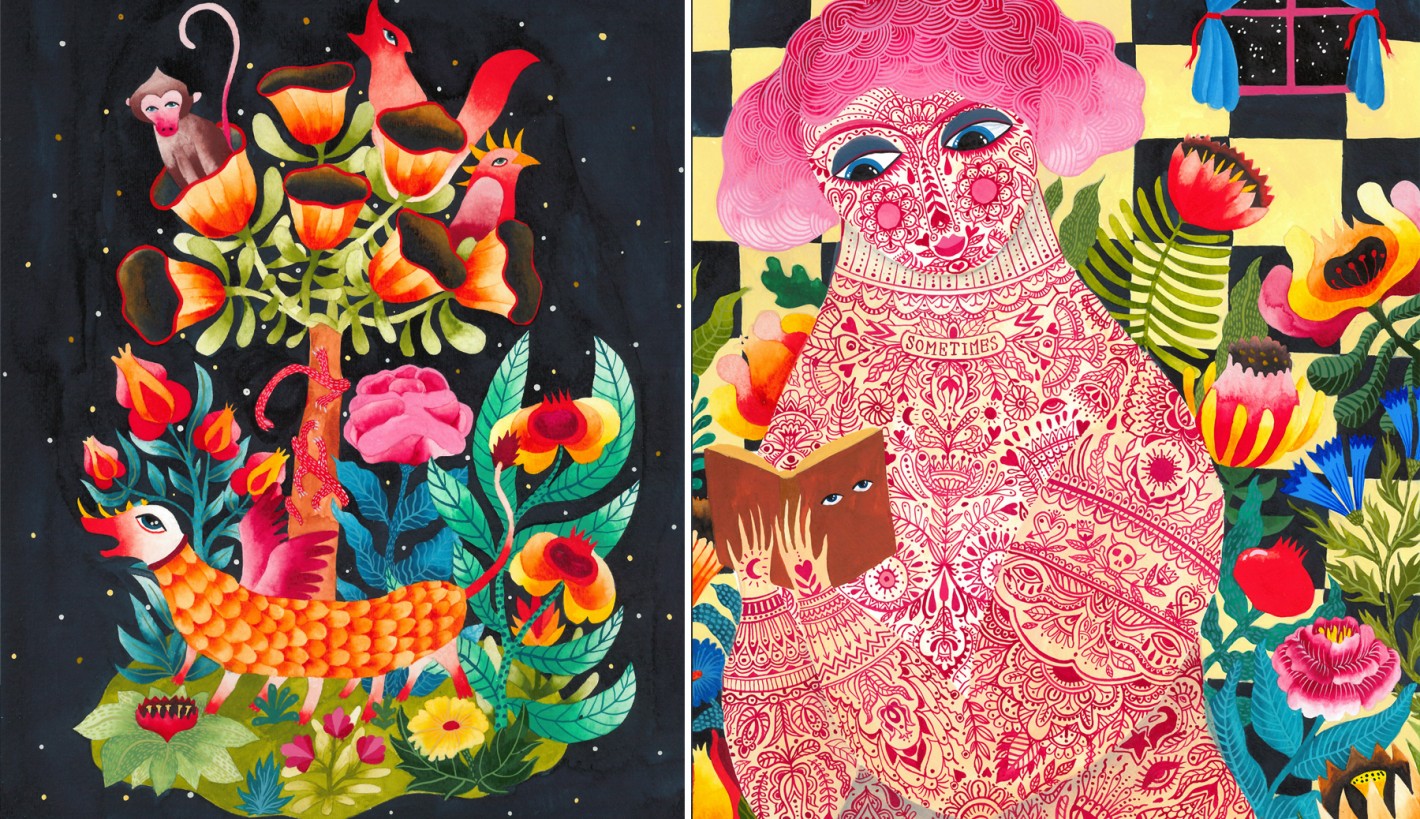 Every culture has its own set of fairy tales and local folklore that is woven into a vibrant tapestry of stories that serve to both enlighten and inspire. These cautionary tales and age-old accounts of heroism and mystical creatures mold our impression of the world around us and stoke the fires of our imaginations and creativity.

California transplant Zsofia Penzvalto, an artist hailing from Hungary who creates vivid, otherworldly illustrations featuring animals and other elements in nature, draws from the rich tales of her childhood for inspiration in creating a world of intricate illustrations and textile paintings that evoke whimsy and fantasy. Working in Davis under the moniker Zsalto, Penzvalto is also heavily influenced by the Art Nouveau movement, a period when artists rejected the notion that classical forms were superior to craft-based decorative arts.

“I grew up in a relatively small town, [and] this town was a very important place in the Art Nouveau movement in the early 20th Century,” she explains of her early artistic influence. “When I first got interested in art it was through Art Nouveau—it has these sort of floral patterns which I think has some influence in my art.” 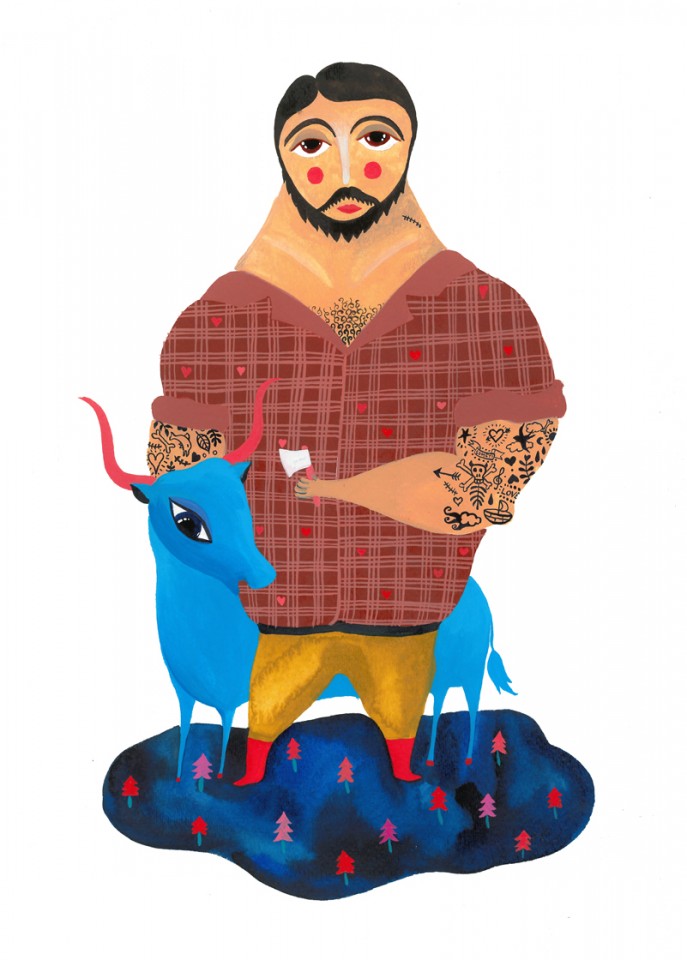 Penzvalto reflects on her little Hungarian village as an enchanted place where the artistic community was one based on collaboration in the purest sense. It’s from this place of artistic inspiration that she began to experiment as a child, but it was through the stories of the matriarchs of her family that she formed her early interest in telling her stories not in words but through vibrant hues collected on paper.

Looking at Penzvalto’s work is like peering down the shaft of a wild kaleidoscope: Larger than life entities like Paul Bunyan and the mythical Babe the Blue Ox along with ethereal creatures seemingly hovering amid inky, midnight skies against a backdrop shimmering, twinkling stars seem to leap off of the canvas in rich, vibrant hues. Working primarily in watercolors and gouache on paper, the artist’s work is a menagerie of animals and fabled beings.

“My style is very detailed, so it’s very time consuming, which is fine because it’s what I like to do,” she explains. “I have a lot of sketch books and I’m just [always] sketching ideas. I like to work in smaller series, like if I find a character which I feel [strongly about], for example my red horse with the blue eyes, if I get attached to that character and I like to make a series around it and put it in different scenes and work with it in a few pieces. I sometimes get into colors, like I have a whole series of grays and reds and I’ll do everything in grays and reds.”

It was Penzvalto’s interest in the natural world that also inspired her to work in biology—the artist also holds a Ph.D. in biology, specializing in cancer biology. She works on her postdoc responsibilities part time in of one UC Davis’ research laboratories. 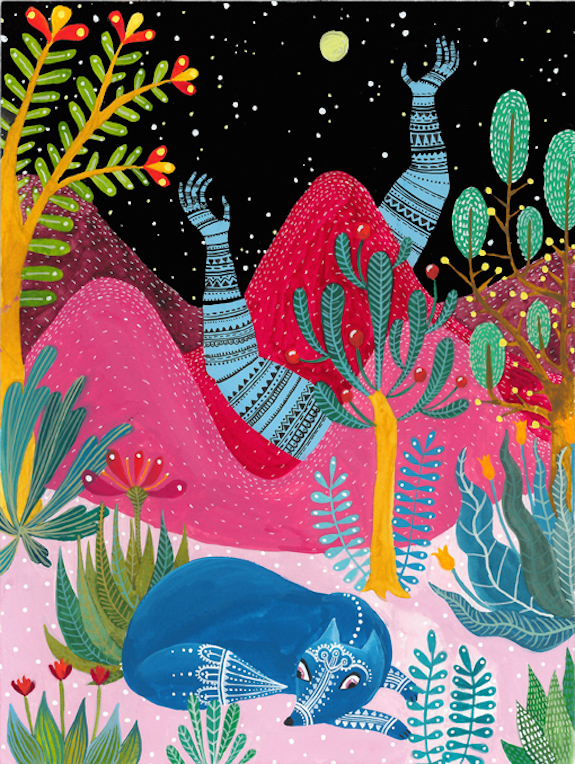 “When I was a kid I liked animals and drawing, so I usually draw animals. After a while my interest in biology became more serious [and] I wanted to do that at the college level, but it was always in the back of my mind that maybe rather I should do art,” she explains. “Doing the biology was the safest option, and it was important for me back then; it’s like your parents want you to learn something that you can have a nice job and make a living out of, but I kept drawing and doing my art.”

In addition to spending long, grueling hours observing lab specimens and contemplating their role in solving a particular scientific query, Penzvalto never lost sight of her childhood passion for the arts.

“I also managed to [go] to art school during my Ph.D.—it was an evening school, so after my work in the lab I went to the [art] school and all of my weekends and it was really hard,” she recalls.

And while biology and illustration may not seem like a natural pairing of disciplines, the doctor/artist says she draws heavily on what she sees in the lab when she is working in her tiny studio at home.

“What I do is mostly molecular biology. There you don’t see much about the nature because you are working with small things but … they have a pretty amazing pattern and these things look amazing,” she says. “I’m sure this has some impact on my work, but [since] I work in cancer [research] which is kind of a depressing topic, I don’t think about much when I work because I am focused on the question, but it’s still in the back of my mind. The anxiety that cancer causes in everyone, especially those affected by it day by day, it can appear in some of my work.” 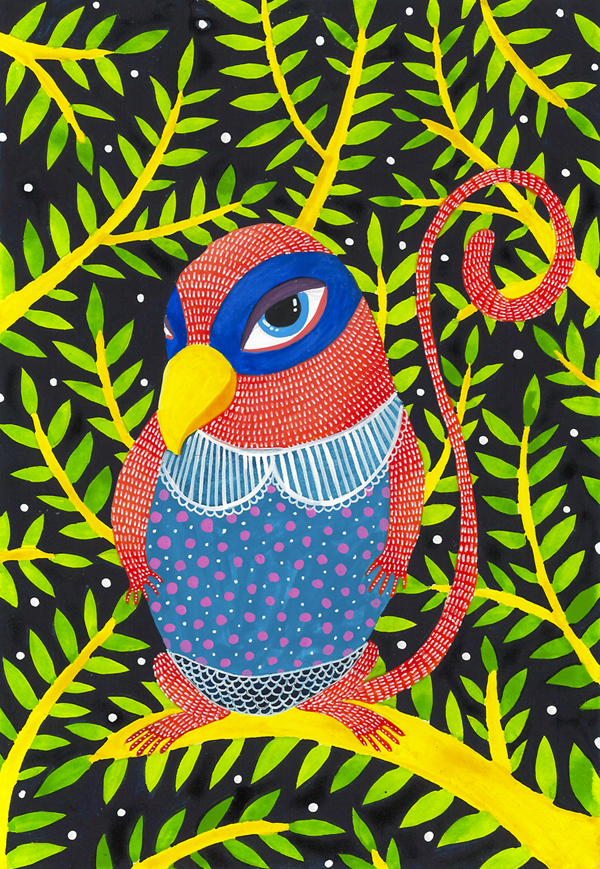 Penzvalto says living in California has also been a major source of inspiration in her creative pursuits: One of her recent creations is an ornate rendering of one of the nights she and her husband spent exploring the Mojave Desert—the piece is rich in detail, depicting the flora and the fauna that eke out an existence in the parched hills and valleys.

“Nature is a big part of my inspiration,” she admits. “I’m generally a biologist, so of course I’m interested in nature and species and plants and animals. It’s [more diverse] here than in Europe; California always has something in bloom, there’s not really a winter so that’s great and I love the sunshine.”

Penzvalto says that her process is a free-flowing, impulsive experience where the art seems to pour from her imagination and onto the page without much planning or foresight.

“I can’t really follow the process in myself; it’s not like I know that this specific creature or composition means this and that. I know that some artists have this very complicated symbolism which they work out,” she admits “For me, it’s much more spontaneous. I also do a lot of sketching and sometimes I use an idea later on.”

The artist confides that although her process is not only incredibly time consuming—creating a sky composed of hundreds of shimmering stars and angelic creatures is certainly a labor of love, she isn’t one to hold on too tightly to her artistic conceptions.

“Whenever I finish a piece I become very unattached from it—it’s like [when] I make up the idea and I’m working away on it I fall in love with it, but when it’s done it’s like it just became a stranger and I don’t care about it anymore,” she reflects. “So I don’t have problems like I don’t want to give away a piece because I want to keep it for myself, because after a while it doesn’t mean anything to me.” 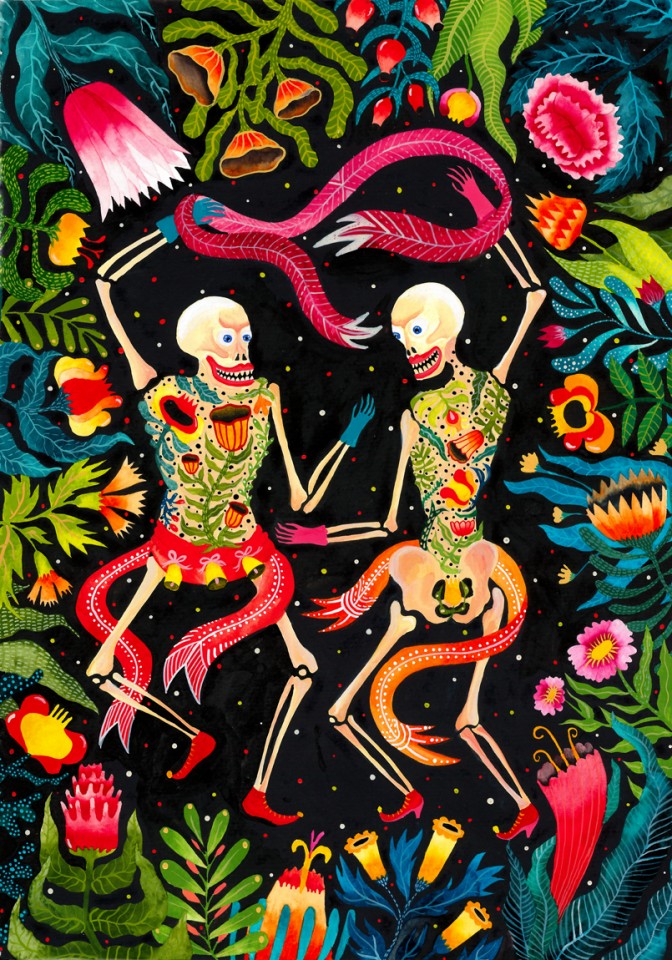 And while she is quick to release her creations into the world without regret or sentimentality, she admits that there is magic in the work through the process of bringing her passions and those early childhood stories to life.

“[My process] is really relaxing and [detaches] me from the everyday struggles and it takes me to a different world,” she says. “When I sit down and start to do it, I really can immerse myself in it. It is a very wonderful experience, no matter what [I] do and no matter what is the outcome.”

Zsalto is one of the artists featured in A Mixed Box of Art, a multi-artist show at Fe Gallery, located at 1100 65th Street in Sacramento. The opening for the show, which also features Susan Ballenger, Daniel Mendoza, Cindy Long, Eric Ryser and Tavarus Blackmon, is June 11, 2016 from 6–9 p.m. featuring live music by The Templetons and a live blacksmith demo. For more information, check out Fegallery.com.