On the Road … Again! Comedian Brian Regan’s Perpetual Tour Brings Him Back to Sacramento 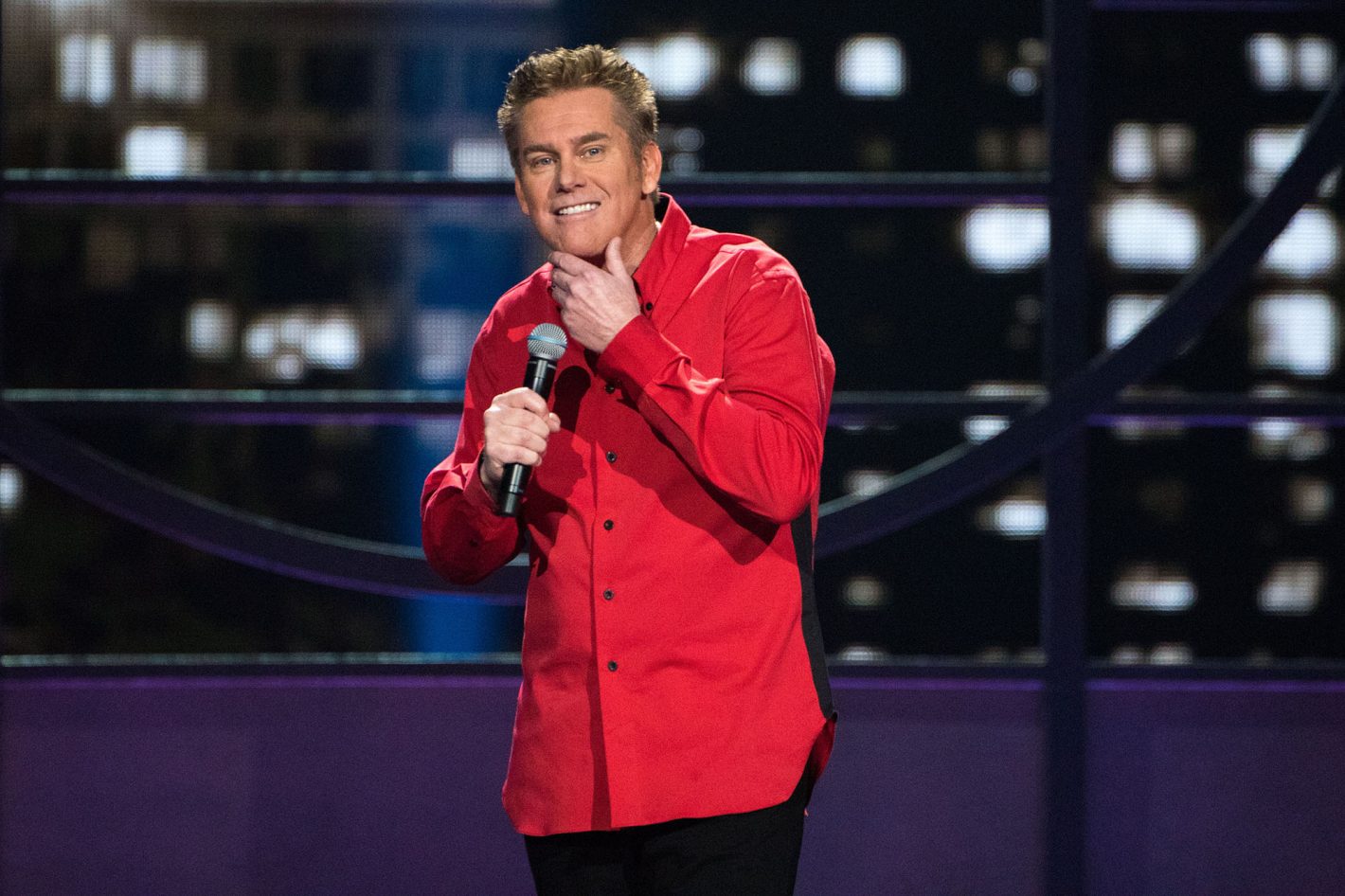 One famous publication called Brian Regan “your favorite comedian’s favorite comedian.” Another called him “the funniest man alive.” Those two quotes sit at the top of Regan’s bio, praise to be plenty proud of.

They don’t necessarily go hand-in-hand. Comedy is quite literally the business of being funny, but it’s also show business. Murk and mystery enshroud the path to fame. Any comic will tell you—being funnier doesn’t necessarily mean being more successful.

Regan has managed to excel at both. He is undeniably funny. No matter who you’re with—your grandma, your tax guy, your buddy in rehab, an eighth-grader and their phone—pull up one of Regan’s clip’s and you’ll both be laughing. Maybe you’re all there at the same time, in which case, happy birthday. The big yellow one is the sun!

Ask enough comics for their Mt. Rushmore of comedy, and Regan’s already huge head will pop up on most. It’s not just because he’s funny, it’s because he’s also done the impossible. Scaling the wall of fame is a tall task, and virtually every successful comedian in history has needed more than one foothold to do so. A sitcom, a podcast, a writing job. There’s no shame in it; that’s how it’s supposed to be done.

Regan has built a career entirely on the bedrock of his stand-up, all while working clean, one hand essentially tied behind his back. Despite more than 25 appearances on Letterman, Regan eschewed the late-night-to-sitcom path most comics of his era took. Instead, for more than 30 years, he just did stand-up, started touring and never stopped.

Now 61, Regan punctuates his perpetual tour by spending time at home with his family in Las Vegas, the only place he won’t perform. He wants his kids to see him as a father, not a comedian.

Recently, Regan talked to me about new creative projects, cursing on television and living life in the middle.

Right now you’re on a “nonstop” tour. How much of your time do you spend on the road?
I do half the weekends of the year, but I don’t do them all in a row. I’ll do a weekend—four shows—and then I’ll take the next week and a half off and go home. But as far as me being out on the road doing stand-up comedy, it’s basically been nonstop for many, many years. I’m always touring.

Your career is unique from most comedians in that you built it entirely from doing stand-up and touring, and not from any other medium.
That’s accurate. I pretty much center my career around stand-up comedy. The last few years, I’ve had an opportunity to do some other things in addition to that, but for the most part it’s the stand-up comedy that is my career, and it’s what I love.

That’s by choice?
I like being a stand-up comedian … until I’m on an airplane and somebody sitting next to me asks what I do for a living.

You reference the moon landing a lot in bits and specials throughout your career. In 2015, you recorded the first ever live comedy special for Comedy Central. Would you consider that your moon landing in a way?
I was proud of that. Comedy Central had never done a live stand-up comedy show or special. I had already done stand-up specials before and I wanted to take something on. I wanted to take [on] a challenge. It’s very risky. Just like landing on the moon, you don’t know if you’re coming back. A lot of things can go wrong with a live broadcast. I don’t want to equate myself to astronauts, but it was definitely a challenge, and I’m glad I took it on. I don’t think I would ever do it again, but I’m glad I did it.

You were kind of the perfect choice for it in that you were established and you work clean.
But also, like, what happens if I hit the stage and nobody laughs for an hour? It’s going out. There’s no sweetening it, you know; there’s no nothing. And also, when you normally do a special, you usually do two shows. You can edit between the two, like if you flub a line or something like that. We didn’t have that luxury, it was just going out how it was going out. So I don’t think I’ve ever concentrated for an hour straight more in my life than during that special. I mean, I was really in the zone, if you will, just thinking about every single word, every line, every moment. I wanted to nail it as cleanly as possible.

Have you been doing comedy so long that you see comedy like a supercomputer, like Neo seeing the Matrix?
I feel like it’s a constant quest trying to figure out how to come up with comedy. I don’t ever want to feel I have it figured out. I like thinking that it’s fascinating and that it’s not easy. There are days when I don’t think of anything, and then there are days when my mind seems to be kind of popping and I’m able to come up with some stuff. I don’t know how it works, to be honest with you. It’s like when I listen to some great song. I don’t know how they came up with that. It’s like, how did they come up with that melody? Maybe they feel the same way about comedians. We’re all just wired differently, and I’m lucky that I seem to be wired in a way that can find comedy.

That’s reassuring for anyone to hear that you feel that way, even at this point in your career.
When I was younger, I used to kind of worry if I didn’t think of something for awhile, just thinking, “Well, is that it? Am I tapped out? Have I thought of every comedy thing I can think of?” But I just know from experience that it just means that there’s a dam in your head, and things are welling up on the other side. Usually if I go through a dry period, that means a particularly wet period is coming right around the corner.

What do you do with your thoughts during the dry periods?
I try to jot them down so I don’t forget them. You know, it’s nice now that with these iPhones you have the word app or whatever it is. I can just jot down a few words that I’ll remember when I see them later. I was just thinking of something last night that I forgot to write down. I want to do a sketch—if I get an opportunity to make more of these sketches—about a mad scientist. But he’s not mad like crazy, he’s mad like angry … He’s angry that his microscope isn’t where it’s supposed to be. The whole time he’s in the laboratory he’s just mad about something. It’s just really silly.

Silly and playful is a great way to characterize your comedy. Would you say that you intentionally try to stay away from darker stuff as part of your philosophy on comedy?
I do on stage. I can get pretty dark and twisted off stage with my friends and people who I’m close with. But on stage, the comedy that I’m presenting to the world, I like it to be accessible to everybody. I’m not looking to divide. You can either divide or include. I like the kind of comedy that everybody in the room can enjoy. Not that I don’t think there’s a place for divisive comedy. If somebody is into that, that’s cool, too. I believe in freedom of speech. But I like the kind of stuff where everybody can feel like they’re part of it.

It seems like stand-up now is trending away from that. Does that only encourage you to be sort of the last bastion of “inclusive” comedy? Or do you feel a little more pressured to maybe talk about darker stuff, or politics since it’s so pervasive?
Actually in the last few years, I’ve touched on some things that would surprise people, at least subject matter-wise. I try to do the kinds of jokes that both sides would laugh at. I have this routine about being in the middle on guns. It’s about how I went to a convention for people in the middle on guns. And I was the only one in the ballroom and I just did this visual of me sipping my drink looking around like, “Where is everybody?” So it’s the kind of joke where I suppose someone who’s truly one way or the other could take offense to. I don’t mind hitting on certain subjects, but I want them to be the kind of jokes that both sides can laugh at.

I guess being in the middle on stuff is kind of the funniest view right now anyway. People have hard takes and strong opinions, so if you’re just sort of ambivalent that may be where the fertile territory is at the moment.
That’s a good point. Yeah. I think that’s why I get a pretty decent reaction from that bit, because it’s like, nobody says they’re in the middle on guns. People take a side on everything. “I have to pick a team! I’m over there, or I’m over there.” Very few people say “Hey, I pick the middle.” It’s not a popular place to be right now.

You’re also acting in a TV show now?
I’m in a TV series which is kind of against the grain from what my comedy is all about. It’s called Loudermilk. We’re shooting a third season next month. I’m actually going up to Vancouver to shoot it and it’s a dark comedy. Peter Farrelly is one of the creators and the director … The Farrelly brothers, you know, their humor is not clean. It can be dark and twisty and edgy, but it’s a show about substance abuse, so it’s going to feature the dark corners of life … My character, you know, says some rough things, includes rough language. I like it because I’m serving somebody else’s creative vision. It’s not my comedy, it’s somebody else’s comedy, but I like being a small piece of pie in some larger endeavor.

Do you have any fun memories of playing Sacramento clubs when you were coming up?
I actually never played a comedy club in Sacramento. I started doing theaters about 12 or 13 years ago. So I think the first time I performed in Sacramento was in a theater. The downside to theaters is you’re there for one night. You blow into town, you do the show and then you blow outta town, so you don’t really get to experience cities the way people think you would. So I don’t really have any specific local stuff [laughing].

See Brian Regan live when he comes to the Crest Theatre (1013 K St.) in Sacramento on Thursday, June 27. Tickets start at $55 and can be purchased through Crestsacramento.com. Doors open at 6:30 p.m. for this all-ages show!