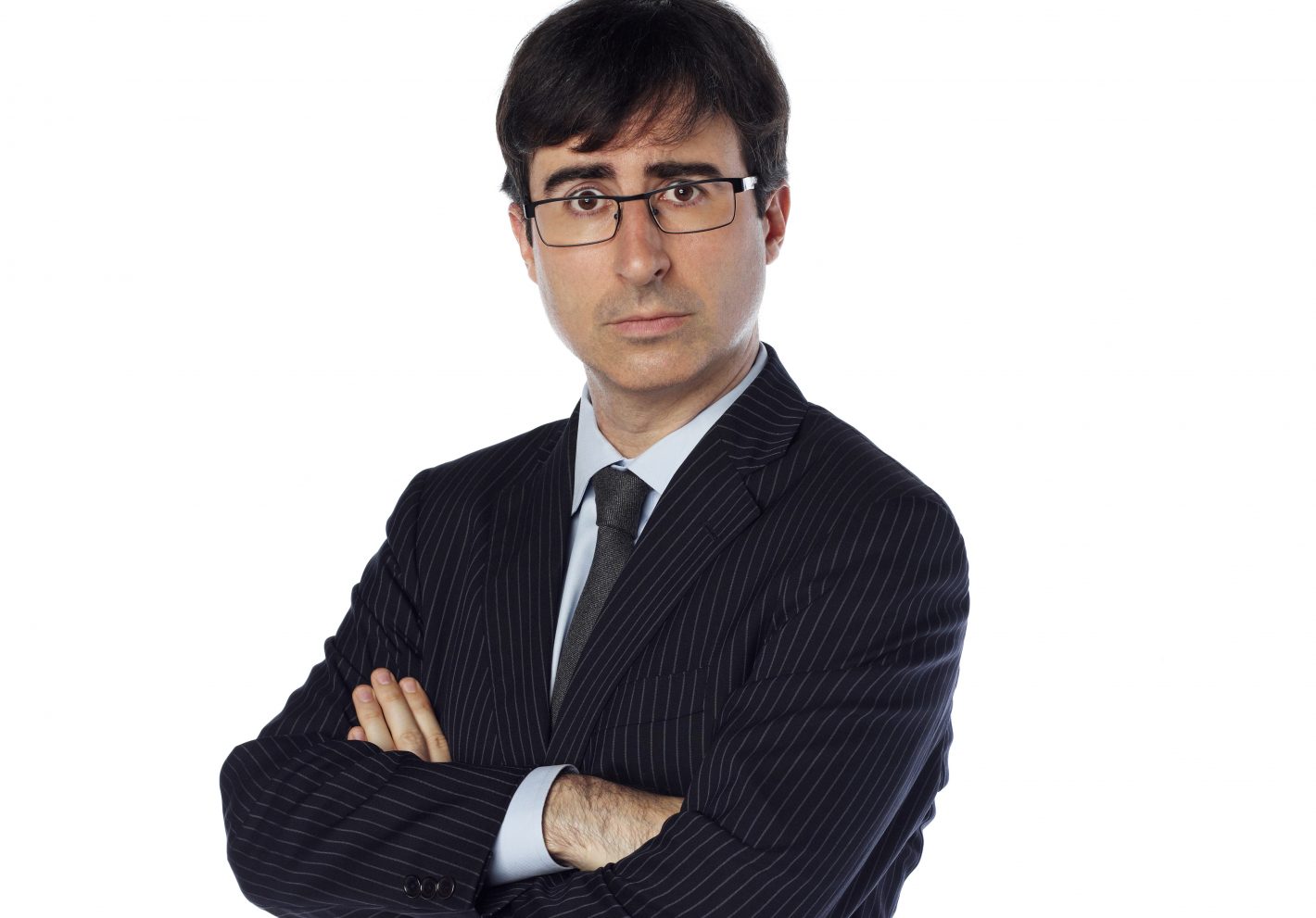 Photo above by Martin Crook

Oliver tells Submerge that The Daily Show workday starts promptly at 9:15 with a writers’ meeting. Basic ideas for stories are hashed out, and then the writers are broken up into groups.

“We try to get a first draft in in an hour and a half, and if the show’s not ready by 6 o’clock in the evening, we’re in real trouble,” Oliver says.

“The time between now and then is basically just controlled panic.”

Though he’s best known for his sternly delivered reports on The Daily Show, Oliver is also a seasoned stand-up comic, though it’s amazing given the show’s schedule that he has time to work on anything else. But stand-up has become a necessary outlet for Oliver, alleviating some of the pressures that mount up during The Daily Show’s rigorous schedule.

“It’s such a controlled environment here [at The Daily Show],” he says. “They’re working toward a very narrow goal. Stand-up is something that you can develop over much longer periods. Also, geographically, it gets me out of the city and clears my head a little bit. I find it a good way to relax, even though to work to relax yourself from another kind of work is not the healthiest situation. I’ve always loved doing it. I find myself tending to get more angst-y when I haven’t done stand-up in a while.”

Despite working as a writer and on-air correspondent for The Daily Show for about six years, Oliver says that the writing he does for the television program hasn’t really influenced the way he works on his stand-up material.

“There’s not a lot of crossover between this and stand-up,” he says of writing for the show versus writing for himself. “This becomes something where you sort of train your body to churn out stuff like a sausage factory. You just mentally sharpen yourself up so you can just push a button and something will come out mocking whatever it is you’re supposed to be working on. Stand-up sits with you for a bit longer. [Writing for The Daily Show] becomes instinctive, really.”

Oliver was kind enough to grant Submerge some time before beginning another day on The Daily Show. During our brief but jovial conversation, Oliver reminisced about the 2012 U.S. presidential election and waxed eloquent about what it was like to don the prestigious mantle of Smurfdom. 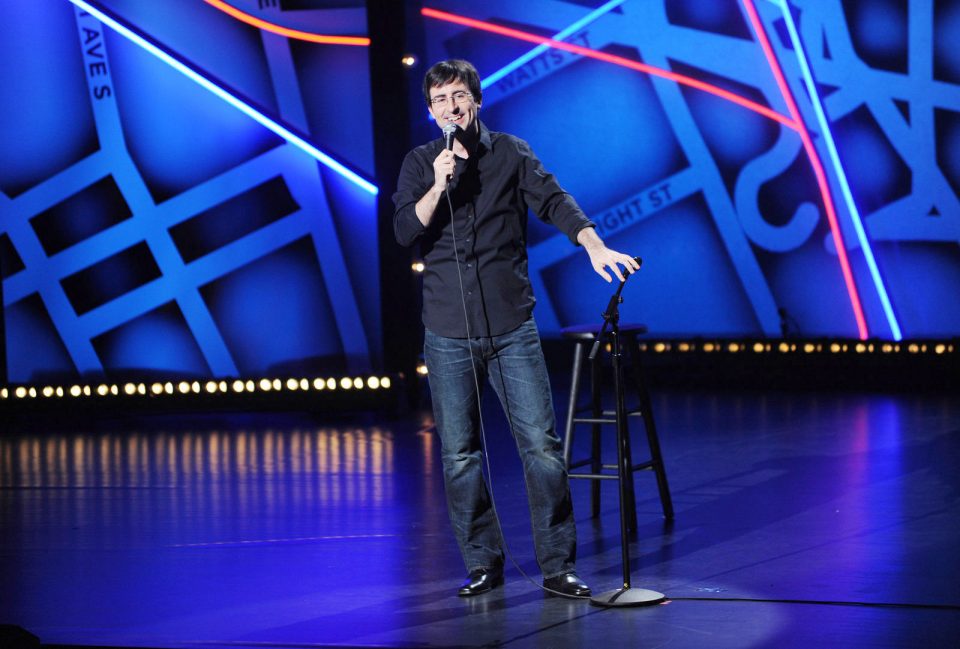 You’ve got some stand-up dates during winter. It sounds like something you’re really looking forward to.
Definitely. In the run up to the election, I couldn’t really do anything at all. I couldn’t really do anything other than sit here and witness the election in gruesome, point-blank range. So this is my first chance to get out and talk about whatever I want, so I’m really looking forward to this. Each weekend for the next couple of months I’ll be going somewhere.

You were busy covering the 2008 presidential election as well. How did 2012 compare?
Well, it was impressively nuts, really. Four years ago, you had no incumbent. You had McCain and Palin and the first potential black president, and there was understandably a huge amount of excitement behind that. This time, the excitement seemed less, but they certainly spent a lot more money on it. The sheer spectacle alone of watching that scale of money get wasted was pretty impressive. I mean, short of actually setting fire to a billion dollars, they couldn’t really have done a more impressive installation art piece of how not to run a democracy. It was absolutely awful.

You lampoon news networks a lot on the show. I was watching the coverage on NBC, and it seemed like they were trying to make the drama of the election more interesting than it actually was once the results started coming in.
Yeah, and then you’ve got Karl Rove digging his heels into the floor of the Fox News studio saying, “This thing is not over. Only on my signal is this thing over.”

But all the way through the Republican primaries, it was the same thing. They were circling around and around and around the inevitable fact that they were going to get a candidate that they didn’t want. It was evident from the first debate that they were going to get Romney, and they tried everything–through Bachmann and Herman Cain–they tried everything to not have him and they got him anyway.

A friend of mine who was on the fence about who he wanted to vote for said he felt as if Romney had been running for president his entire adult life.
Not just his adult life, but his child life as well. His temples started graying when he was 6 years old. This is a guy who was practicing his acceptance speeches while he was in the bath.

Do you think he’ll come back again in 2016?
He’s rich enough to do it, though it might just be cheaper for him to pay people to pretend he’s president now.

You do The Bugle podcast with your buddy Andy. On one of the more recent ones, you were talking about Kate Middleton being pregnant, which I think was even big news for me…
The Golden Child. The Golden Child is being born now to save the planet.

Is this kid the messiah?
Well, yeah, it’s going to be a cross between a messiah and Superman. This child is going to restore the British Empire to its rightful place. Every British person should put all of their hopes and dreams into this one, poor, unborn infant. If this kid lets us down, I don’t think we’re coming back from that.

Can Americans really fathom how big news this is?
It’s huge news. I can’t really put it into context for you. Imagine if Michael Jordan had a baby with Martha Stewart. It’s the perfect child.

Last year, you got married, and I’d heard on Late Night with Jimmy Fallon that you’d met your wife at the previous Republican National Convention.
I did. It was very strange. She was at both conventions. She was in the army. She and a bunch of veterans were at both conventions campaigning for veterans’ rights. So yeah, I met her there. It wasn’t the most romantic place to meet. I wasn’t expecting to meet my wife at the Republican National Convention, and if you told me that was going to happen, it would have chilled my blood on the spot, but it’s funny how life works out.

How’s married life been treating you?
It’s awesome! It’s great. I really don’t have a bad thing to say about it. Ask me again in 10 years. Statistically, I’ll have a different answer I think.

Looking forward to 2013, you’ll be reprising your role as Vanity Smurf in The Smurfs sequel. When you first started your career, did you have any idea that you’d be the voice of one of the Smurfs?
I mean, that’s always what I was aiming for, because I thought it would come later in life. The problem is there’s nowhere to go from here. Once you’ve embodied a Smurf, I guess, I don’t know, Eastern religion is the next point. Life is finished, My work here is done on Earth.

I grew up on The Smurfs, were they as popular for you growing up in England?
Of course! We’re geographically closer to Belgium. Those tiny blue Belgians were almost in touching distance. I had Smurf toys. I watched The Smurfs. I think even as a child you’re like, “This doesn’t really make sense, but I’m enjoying it.” When someone asks, “Do you want to be a Smurf,” the answer is, “Yes.”

There were some weird things on the show, like they’d dance around pentagrams and stuff.
Yes, I think they’ve removed some of that from the American movie version. When you see Smurfs dabbling in the occult, that can affect your opening box office. I haven’t seen the final cut of The Smurfs 2 yet, but there may be a pagan sacrifice in there. I’m not sure.

Do you have any inkling of what will be some of the big news stories of in 2013?
The Supreme Court’s going to rule on gay marriage. They’ve announced that, so that will be a big one. I think other than that will be everyone gearing up for the election in 2016. I think that will already be underway, so Iowa and Ohio better get ready, because Hillary and Jeb are coming. 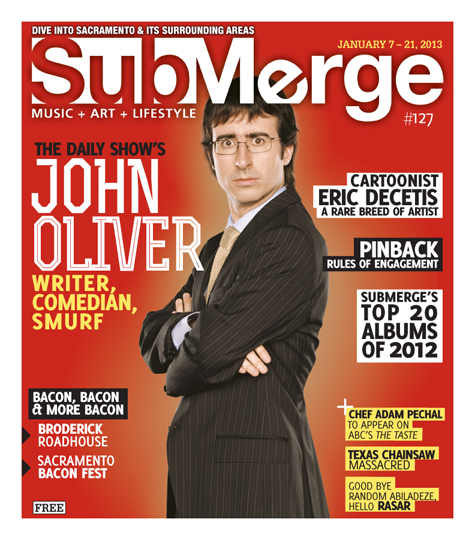 Don’t miss John Oliver when he brings his stand-up to Sacramento. Oliver will perform at The Crest Theatre on Jan. 18, 2013. Tickets are $35 and can be purchased through http://www.thecrest.com/.