Creepin’ Up on Fame 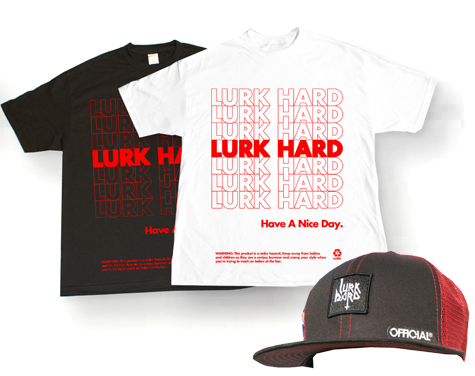 Over the years, the greater Sacramento area has bred or been home to some incredibly talented skateboarders: John Cardiel is quite literally a legend; ESPN called Matt Rodriguez “one of skateboarding’s unsung godfathers of style”; Brandon Biebel is a worldwide name; Omar Salazar and Stefan Janoski have their own Nike signature shoes, for crying out loud. This list could go on and on. There are a lot of rippers from around here making waves in the skate scene; currently, the Lurk Hard crew is a huge part of that. If you’re asking yourself, “What is this ‘Lurk Hard?’ And does it have anything to do with how much time I spend on Facebook creepily looking up people?” you’re wrong, sort of.

Lurk Hard is a Sacramento-based clothing company that makes T-shirts, sweatshirts, hats, beanies, etc. that was started by longtime skateboard enthusiast and Fresno, Calif., native Geno Failla. The company’s website, Lurkhard.com, offers up this description: “Lurk Hard offers an innovative style solution for your everyday lurker by offering affordable, quality clothing products that skateboarders can connect with to complement and enhance the lurker lifestyle.” Since the company’s 2008 inception, Failla has built a solid team of talent to rep his brand. The team’s second video, Summer Boyz, was recently uploaded online in its entirety to Lurk Hard’s site in a six-part series. In celebration of the film’s free digital release as well as Lurk Hard’s spring/summer 2011 collection being released soon, Submerge hooked up with Failla and team shredder Chuck Donnatin, arguably one of Sacramento’s biggest contenders to be “the next big thing,” for a couple separate interviews. 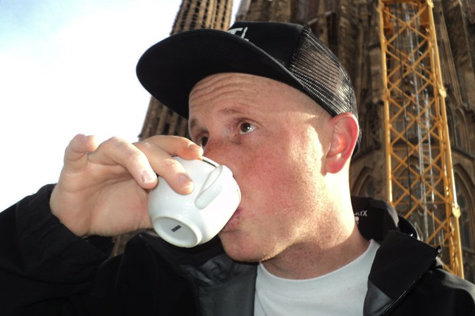 When did you start Lurk Hard? What was your motivation behind starting your own clothing company?
I started the brand in January 2008 with my ex-girlfriend Jeanie Sriboon. Shortly before the conception of a brand, I wanted to do something that involved skateboarding and have an outlet for my creative ideas. We made some stickers and a few shirts and things just started to develop from there.

How many stores can your stuff be found in now? You guys are all over, right?
We’re in about 30 stores throughout the United States; our own online store, Shop.lurkhard.com; FTC in Barcelona, Spain; and Animism in Australia.

How many skaters are a part of your team?
The Lurk fam consist of Chuck Donnatin, Clyde Moore, Mark Dillon, Rob Mason, Nicholas Silva, Blue Turner, Aric Hondel, JR Dias and a few others on our flow program.

How long have you known Jack Mansfield, the filmmaker who’s done both Lurk Hard videos? What draws you to his filming style?
I met Jack shortly after moving to Sacramento in 2005 through Rob Mason at Flatspot skate shop one day. Jack’s whole entire creative process from start to finish with any project he does is amazing. It’s rad that he still uses Super 8 film nowadays, considering most people have moved on to using only HD cameras. I love the way Super 8 looks! I know that if Jack is going to do a video with us, it will be top quality. He doesn’t do anything half ass at all.

Summer Boyz is the second official Lurk Hard video. Why did you guys ultimately decide to upload it online instead of putting it out on DVD?
Yes, Summer Boyz is the second video that we’ve done with Jack Mansfield. The first one was 19 Years Young. We decided to put it online for everyone because we wanted more people to see it worldwide. If we decided to sell it, there’s a lot more to deal with in getting the rights to music that we used as well.

Can you hint at anything else exciting on the horizon for Lurk Hard? What about the next video project? Have you started thinking about that yet?
We have our first part of our spring/summer 2011 line coming out in stores and online in about a week. I can’t say much about some of our upcoming collaborations with other brands, but I’m pretty excited about doing them. We’ll be working with new designers as well. Stay tuned for more on that. As for another video, we never stopped filming after we finished Summer Boyz. But I’m not sure when the next project will be out. We’ll always have short videos on our site; check it out at Lurkhard.com. 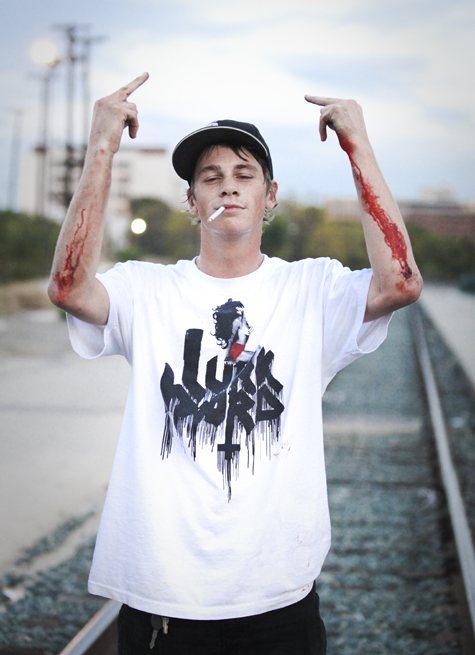 How old are you? How long have you been skating?
I am 21 years of age. I’ve been skating for about 11 years now, about half of my life.

How long have you lived in Sacramento? What brought you here?
I moved down here about eight or nine months ago. Skateboarding and filming out here, you know, I thought I’d cut out the two-hour drive from Gardnerville to Sacramento.

You were making that commute a lot, huh?
Dude, wintertime, summertime, all the time. So I moved out here with the boys, and I’m just going to school out here and working.

How did you connect with the Lurk Hard crew?
Well I’d been skating with a few of the guys, Rob Mason and Mark Dillon. They are good friends with Geno. I’d just come down here and film and just meet up with the guys. It was before my first knee surgery, right when I got out of it I was down in Sac, and Geno had heard about me through word of mouth and he was like, “You know what, I’m starting up this company called Lurk Hard and you’ve been shredding, so…”

So when you first met him you weren’t even skating because you were hurt?
I forgot exactly when it was. It was before my surgery or right afterwards, but I wasn’t skating for like a year, because that’s how long it takes. He was like, “When you get back at it, let’s do it.” It’s been good since then. He’s been good to me.

What happened with your knee? In Summer Boyz you’re wearing a gnarly brace.
Originally I tore my ACL skating, which was about three years ago, right around the beginnings of Lurk Hard. Yeah, I’m just misfortunate, you know? I’ve been through multiple knee surgeries now. The reason I was wearing that knee brace was because I had my second surgery about a year-and-a-half ago, and it’s just to be supportive of the knee. But just jumping down all that crap, you know? I don’t wear that now, though.

Oh, so you’re out of the brace now?
Yeah, I’ve been working it out, building up that muscle. Got to keep on doing that, it’s crucial. But I feel comfortable to not wear it now, so we’ll see how it goes. 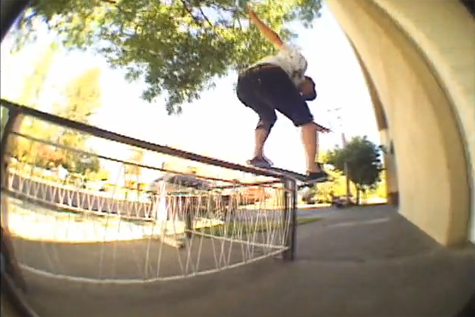 Lets talk about the Summer Boyz video, the most recent Lurk Hard flick. Are you stoked on how your part came out?
Not really [laughs], to tell you the truth. I could have done a lot better. I came out of that surgery and it was right when I moved down to Sac, that’s when I started getting back into filming and pushing it… And that damn knee brace looks so goofy.

Well I thought your part was sick. And just in general the whole film is really well shot and edited and everybody’s parts are pretty rad. How long have you known Jack Mansfield?
Mark Dillon pretty much introduced me to Jack and his work and that was about three years ago, it was a while ago. Ever since then I’ve loved his work. He’s an amazing filmmaker. He’s got his shit down.

Who are your sponsors right now? Who is hooking you up with gear?
Lurk Hard, The Company Skateboards, American Icon Wheels out of Stockton, those are good wheels. They are killing it. And Converse, I’m getting some shoes from them. It’s just team manager type shit, but you know, I’m getting some shoes from them. Trying to build on that is another thing that’s on my plate.

That’s a legit connection; do you think it will lead to a full-fledged sponsorship?
We’ll have to see.

How did you get hooked up with them?
There’s a rep up in Seattle I believe it is, he’s been shooting me the shoes. He knows Eddy at FTC and Darnell with The Company, they are his homies and were like, “This kid is skating hard and likes Converse, so shoot him some shoes.”

So it sounds like you’re definitely on their radar?
Kind of, yeah, not big time.

When we were trying to set up this interview you mentioned something about how you have to go to a yoga class. How long have you been doing that and does it play into your skating at all?
It’s new. My body is toast, you know? Between skating, working, just getting after it, I don’t like resting. Plus since I went through the knee surgeries and all that stuff, I feel like I need to be flexible on my skateboard with my balance and all that. I’ve been getting really into skating, my body and taking care of myself. I’ve been doing it for about two months now. It just feels like I’m more limber. I drink a lot, you know [laughs], and drinking is terrible for your muscles. It’s terrible for the day after as far as being one with your board. Yoga is a good way to just keep limber and, well, the girls are gorgeous in there too.

Do you ever think about your goals for your skateboarding career?
Oh God yes, all the time. That’s pretty much what keeps me going. I always got the plan on the calendar, what’s going down. Omar [Salazar] was telling me before he did it big, he had this plan of what he was going to do and when he was going to do it. I think you need that. Because whenever I step on a skateboard, I’m having the most fun I’ve ever had, so I might as well take that and make a plan with it–you know, organize it. Everybody is like, “Oh, I just skate for fun,” and I’m like, “Every time I step on my skateboard I’m having fun so I might as well make a business out of it.” 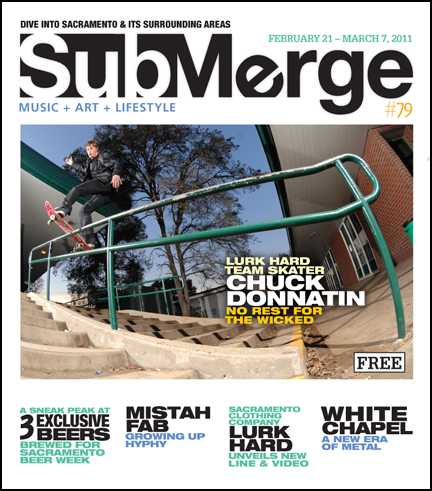 Check out Lurkhard.com to view Donnatin and the Lurk Hard crew in Summer Boyz, a Super 8 film by Jack Mansfield. To grab some Lurk Hard gear locally, hit up FTC, Nine16 Skate Shop, Getta Clue or any Ground Zero location.