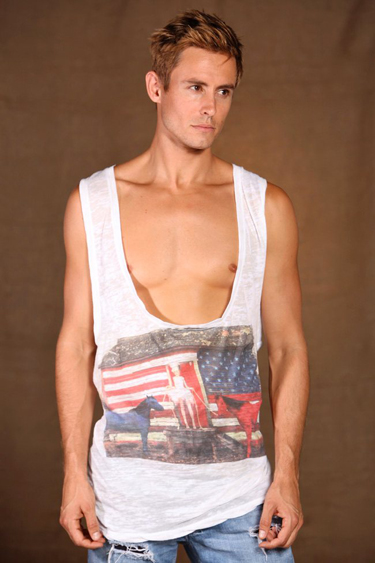 In 2008, when fashion designer Traver Rains’ highly acclaimed label Heatherette started to dissolve around him and then-boyfriend/co-designer Richie Rich, he found himself tired and torn. For nearly 10 years, he and Rich had built an empire; their eclectic, unusual designs were seen on countless celebrities and famous models on runways, in magazines, on television and in movies. The two traveled the world together showcasing their work at upscale fashion shows and hosting celeb-studded events and parties—basically living like rock stars. Rains guest judged an episode of Project Runway and appeared on America’s Next Top Model. You get the idea—Rains and Rich were, and still are, a big deal in the fashion world. Because of his success with the Heatherette label, many in the fashion scene expected Rains to dust himself off and jump right back on the horse immediately after it shut down, but he had other plans.

Rains began using his newly acquired free time to focus on another passion, photography. This familiar outlet of artistic expression (he spent his fair share of those 10 Heatherette years at photo shoots) soon influenced the launch of a T-shirt line called T-Rains. His photography and new line are heavily intertwined and feed off each other creatively, as you’ll see in the following interview. Rains will be in Sacramento on Dec. 17 at the Haute Holiday Gala hosted by International Academy of Design and Technology, giving us a chance to view his impressive work in person. 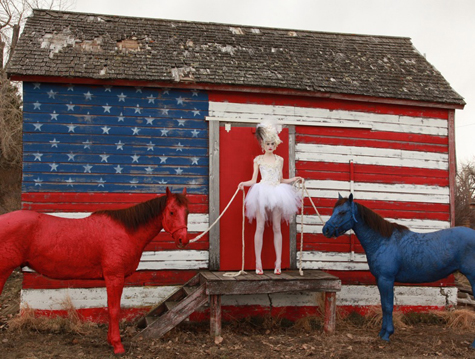 How serious do you take your photography? Would you say it’s your main focus now?
Yeah it’s my main focus right now. I’m having a lot of fun with it.

Do your design work and photography feed off of each other creatively?
Yes definitely, that’s sort of the point to the new T-shirt line is to have the connection between the two. I spent nearly 10 years in New York doing Heatherette and a lot of that time was spent on photo shoots, and that was always a fun part of the design process. I learned a lot being behind the scenes and seeing everything that goes on. After we wrapped Heatherette up, I kind of felt like I had grown up on a photo shoot”¦ I was a little bit tired of the whole fashion/design aspect of everything, so it was just sort of a natural transition. Another thing that sort of inspired me was going back home to Montana, and we have a big horse ranch and on the property there’s these amazing old buildings from the settlers and they’re all sort of collapsing and falling down. I sort of wanted an interesting way to capture them, so I flew in a model and a hair and makeup team and that was sort of my first endeavor behind the camera. I started thinking of the images I had taken on T-shirts and sort of just out of habit, I guess, I stared making them. I decided I could try and tie the two together, instead of sell the photography as a picture, sell it as art on a T-shirt.

I’m looking at a few of those photos from Montana, and they are beautiful! When was it? It looks like it was cold.
It was springtime, and the poor girl was freezing. 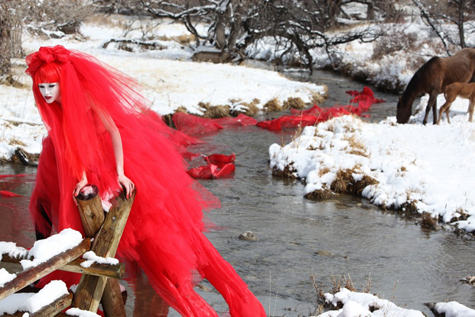 The one where the woman’s red dress is flowing down the creek behind her, how did you set that up? Was that photo pre-meditated or did it just happen?
Yeah, I kind of had that image in my mind for a couple of months. The dress is made up of like two hundred yards of that red material and most of it is all connected to the train of the dress. And so even though the creek wasn’t moving very fast, it was still so much fabric that it was pulling her off of that ledge. She was in heels and there was snow and ice everywhere.

Horses show up in a lot of your work. Are they a big inspiration for you?
Yeah, I basically grew up on the back of a horse. I had a pony before I could walk. So yeah, the western thing has always been really important to my whole vibe. I wear a cowboy hat and boots everywhere still; I just grew up that way. I like the leather, the rough-and-tough feel, even my T-shirts I’m sort of adding that into them.

The Heatherette label that you ran with Richie Rich has been inactive for some time now. Do you miss it?
Oh yeah, definitely. It was the best experience. We did 16 New York fashion shows and then we did almost another 20 around the world, everywhere from like Russia to Austria to Miami to Los Angeles. All those photo shoots and celebrities—it was amazing and a lot of work.

What was it like when famous models and celebs were wearing your designs on the runways, in magazines, on television—it must have been like a dream come true!
Yes, I always was pinching myself. Always.

Do you and Richie still stay in touch?
Yeah, we’re completely on great terms. I see him every once in a while in L.A., and he’s still running around like crazy, so we don’t chat every day or anything.

Do you find now that designing as a one-man team, as opposed to a duo, is easier? Harder?
It’s different; working with another person is easier because you have somebody to help you out and you always have to give and take and collaborate. I definitely couldn’t have done what I did at Heatherette without Richie involved. I learned so much from that, that working alone isn’t that tough. I kind of know the ropes now. I’m just re-starting out really slow; I’m not going to go into any mass production thing right away. I want to keep it sort of artsy and small for a little bit. Also, I don’t want design to take up so much of my time that I can’t do these photo shoots. 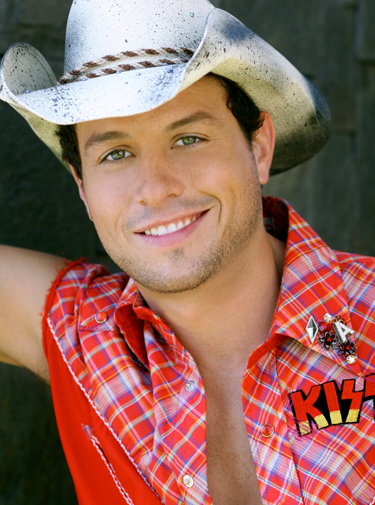