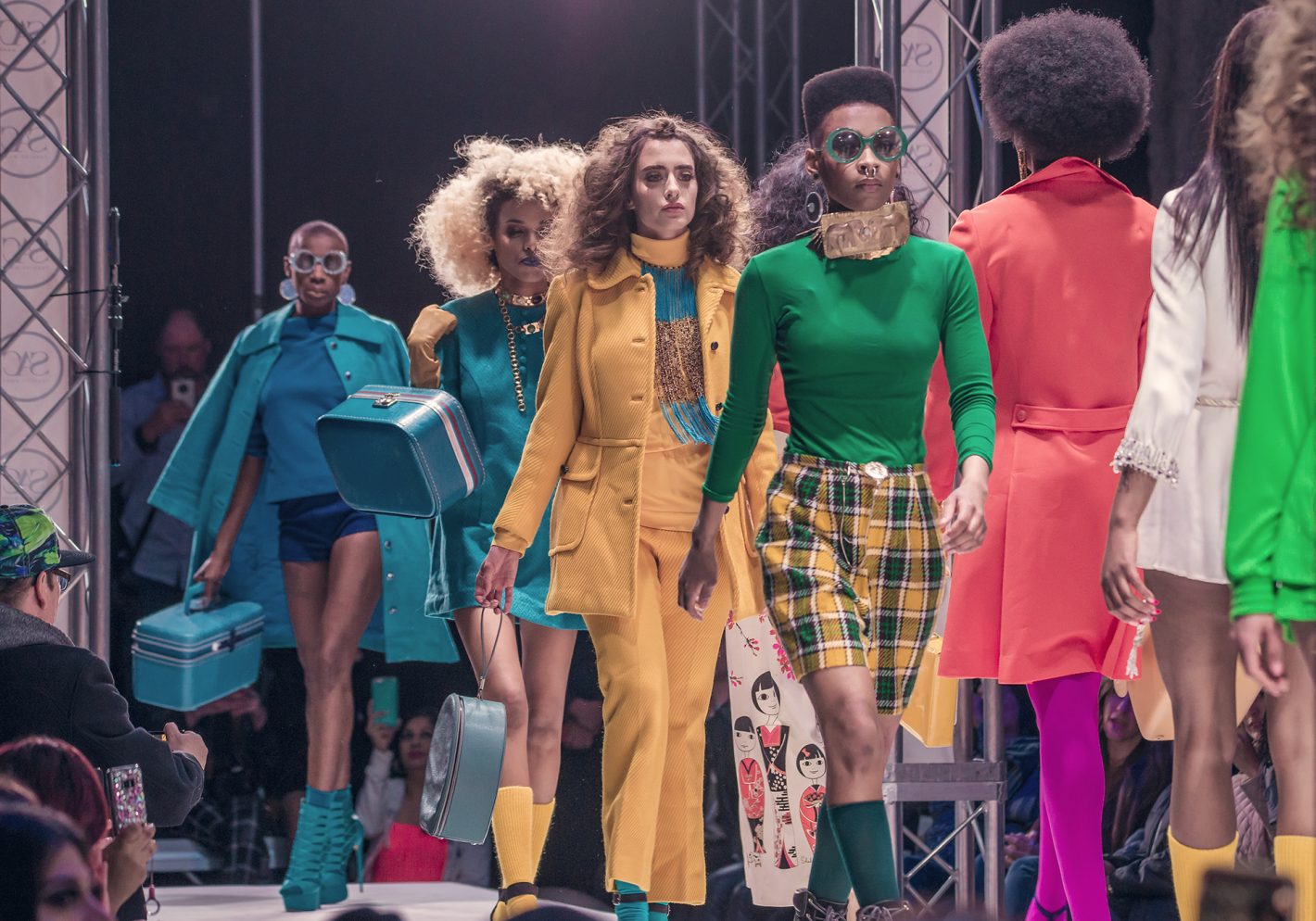 Photo above by Antonio Elumba | All other photos by Henry Huynh

Sacramento is paving the way for all areas of artistic development. Sac Fashion Week definitely continued the expansion of artistic representation, adding a sleek twist to everyday looks and teasing what to see for the upcoming spring/summer season.

Set in the Downtown Commons Plaza, the 12th annual Sac Fashion Week was the result of a 48-hour transformation, which prior to the event was the Macy’s Plaza undergoing continuous renovation. The industrialized, converted icy white space matched the chilling air outside, seeping in through the black curtains serving as entrance. Blue lights reflected down onto the white seats surrounding the runway, as if from a magical presence above.

Working with local higher education institutions to develop talent, Sac Fashion Week is an event that allows local aspiring designers to gain real-world experience as part of a large-scale fashion event. With proceeds of this year’s fashion show going to 3Strands, a global foundation that combats against human trafficking, the work of models, photographers and hair and makeup teams created defining pieces for the designer and their personal artistic movement.

With a mix of varying structures, copious amounts of accessories and attitude reflective of Sacramento’s community and culture, these 10 pieces illustrated the beauty and niche of Sac Fashion Week’s spring/summer collection. 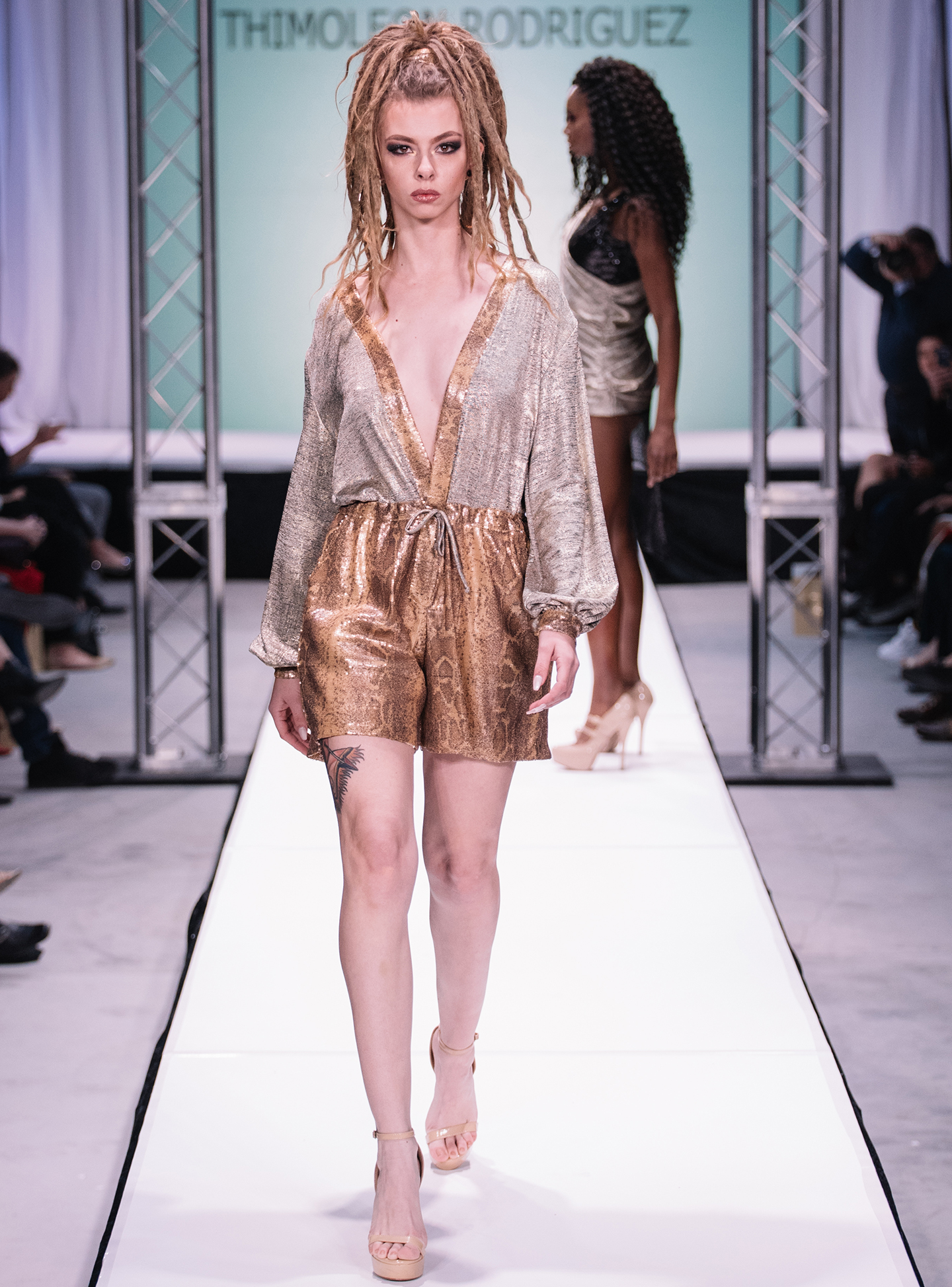 1. This first fit was by Thimoleon Rodriguez, who stated that his inspiration for his collection was New York. In turn, this specific piece was a nod toward the sights and sounds of New York. A deep-V neckline complements the chic, gold metallic romper with subtle animal prints on the leg and collar of the outfit. It’s shaggy but profound. The model’s dreaded hair in a high ponytail with darkened pink eyelids played on the dark and grungy aspects of the Big Apple. There’s something to be said about the juxtaposition between a more bohemian hairstyle paired with a loose-fitting, yet daring romper. This piece was seen within the first couple minutes of the show, and for good reason. 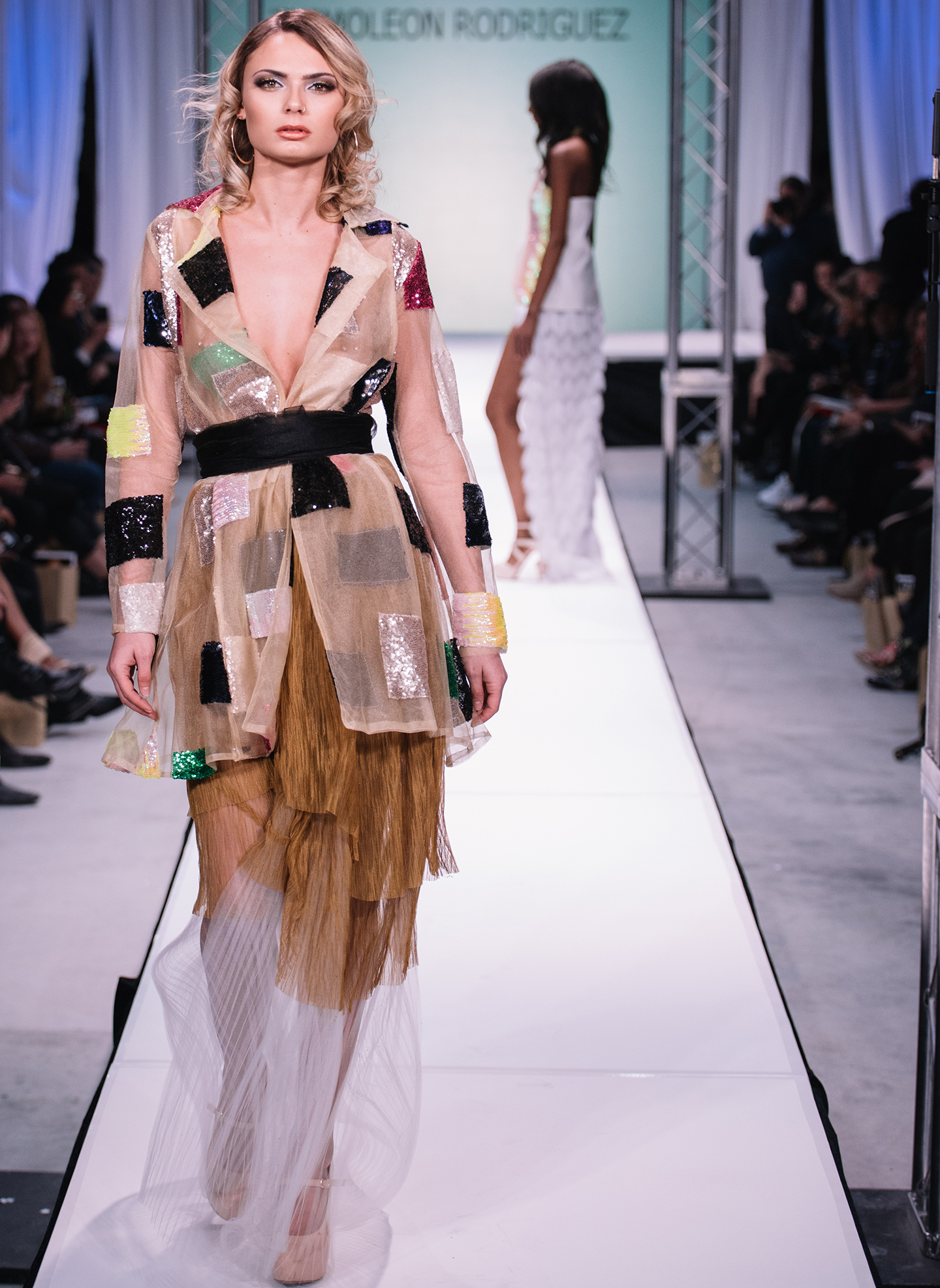 2. Rodriguez also paired frilly pieces and pops of numerous colors in his collection, which were recognized in this next piece. Rodriguez used the same metallic patterning, as well as a deepened neckline from the previous outfit to create a menswear look on top of a nude tulle skirt. Having a nude undertone with sheer fabric perfectly accentuates the varying sequined patches, with a sheer black belt to cinch the waist. As menswear has taken off in the world of fashion, seeing something rather bold and eccentric on top of an otherwise feminine frame serves as testament to Rodriguez’s unique sense of fashion. 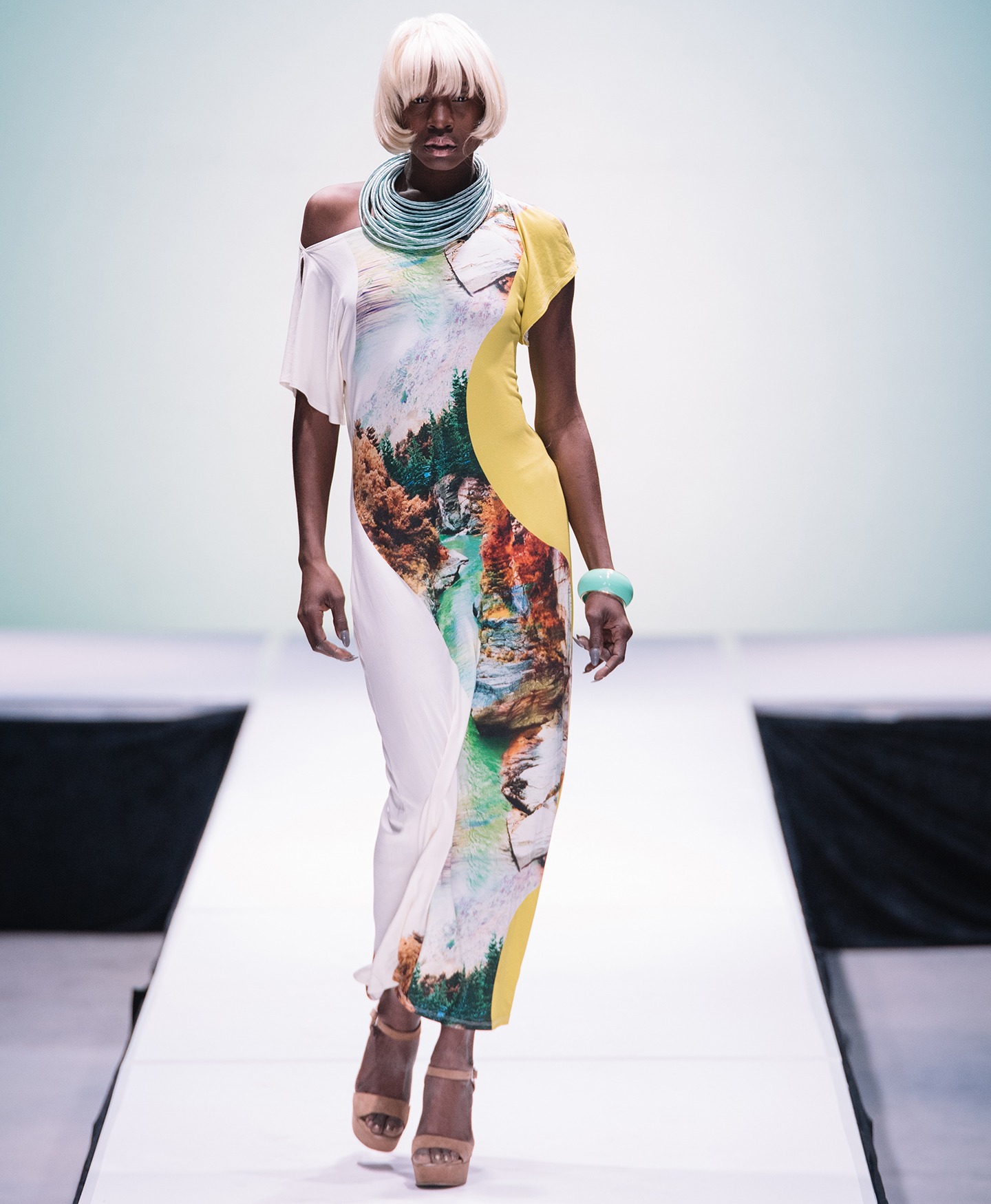 3. In Angela De Forsage’s collection, this female designer was inspired by various cultures. De Forsage focused on easy-to-wear pieces, large head and hand pieces, wigs and bright colors. This specific piece was a nod at cultural and geographical landscapes; the styling of the dress complemented the model’s body in picturesque quality. The flow of colors down her frame accentuated the meticulous detailing on the dress. 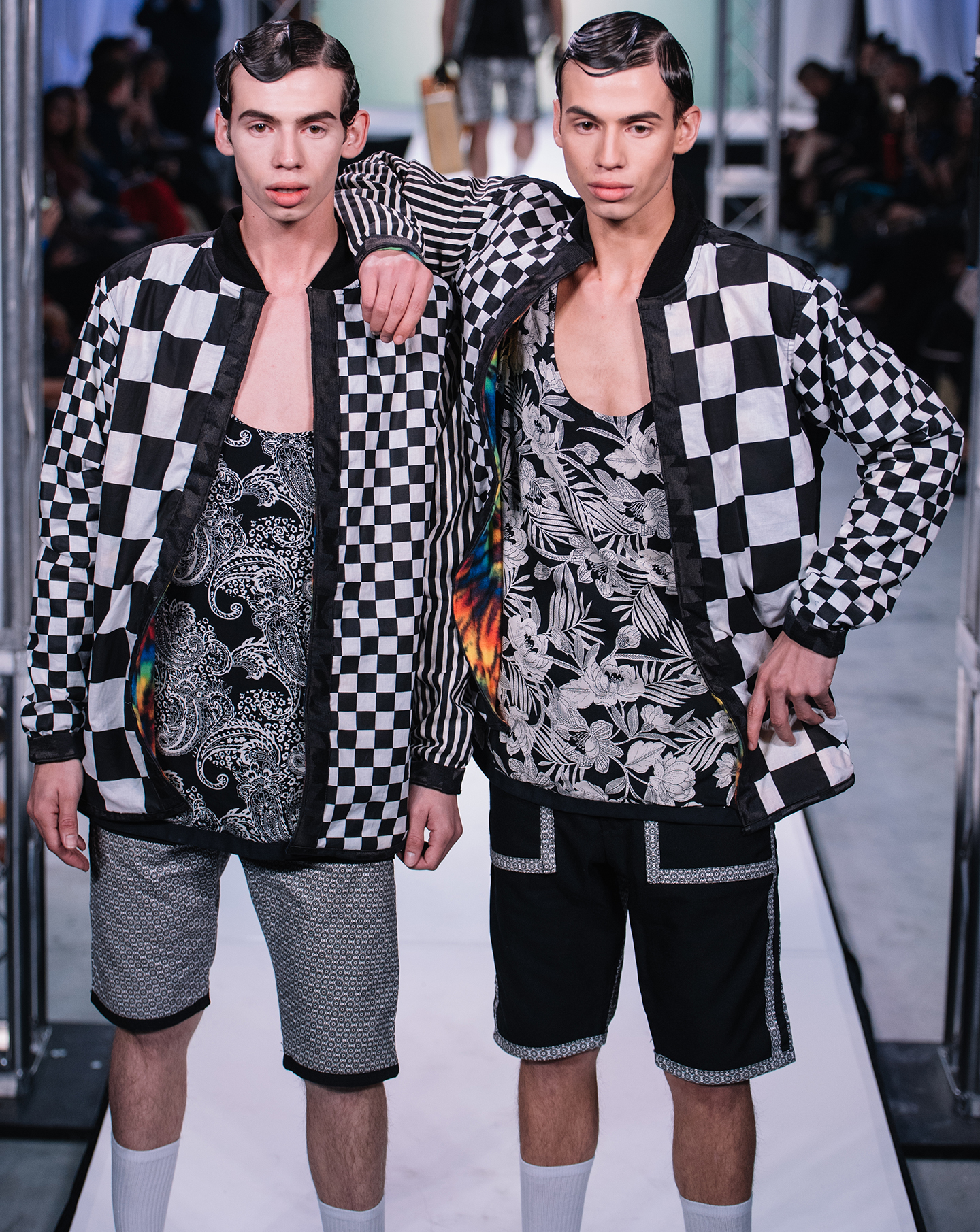 4. There’s something both striking and theatrical about the use of symmetry in fashion. Hagen Valencia achieved that with his collection by way of his choice of models: twins. Valencia plays on varying textures and prints, and then layered them to create shapes and silhouettes that mirror one another as a whole, but differ in design within his look. Inside paneling teases a pop of color, while the rest of both of these outfits were subtly, monotonously chaotic. While Valencia’s use of monochromatic colors lies in the background of his designs, the use of checkered print mixed with a sleek 1920s inspired hairstyle complements Valencia’s design concept, one after another. 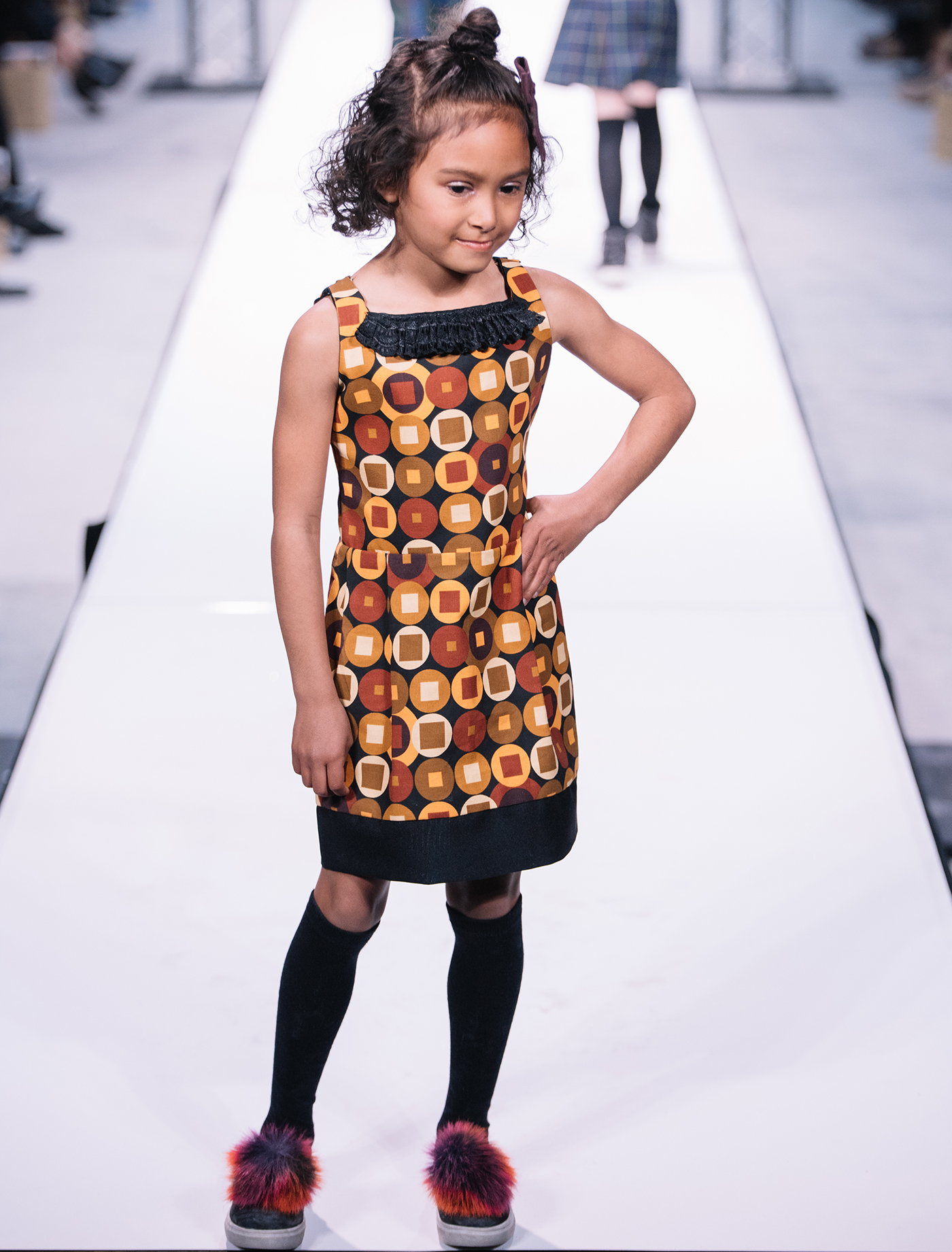 5. Janelle Cardenas showed off a mini-version of her collection—a kid’s line! In this look, Cardenas combined a warm, earthy, ‘60s-style, Twiggy-inspired Go Go dress with a black frill neckline, knee-high socks and funky fur-covered sneakers to create a style that any age could rock! Cardenas seemed to focus on this with all her children’s looks; they were age-appropriate, but also functional for varying personalities and styles. The colors within this look allowed the model’s olive skin tone to pop, and the choice of a feminine bow settled in her hair (as in all of Cardenas’ looks) added a touch of youthfulness to an edgy twist on a retro, fashion-forward look. 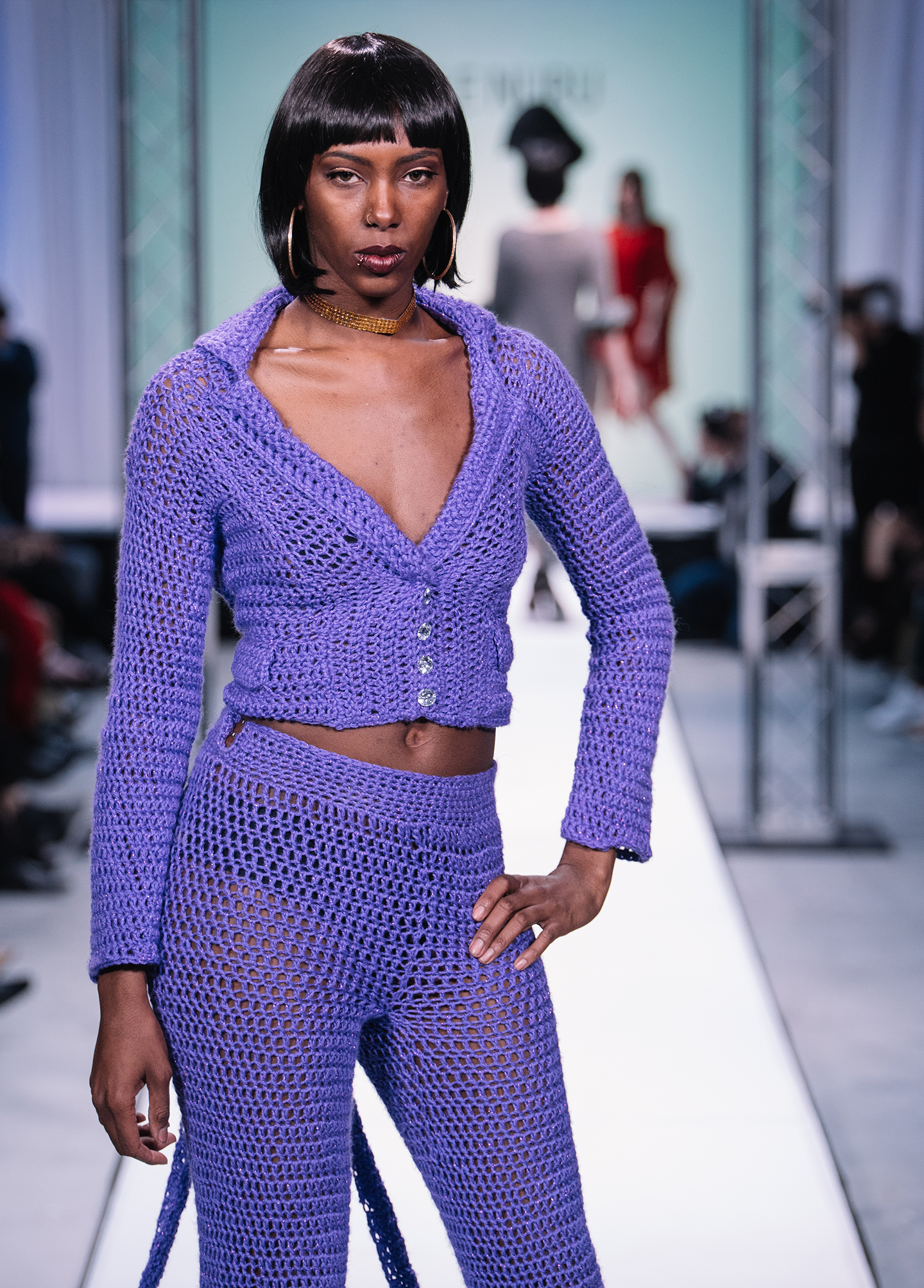 6. Zenzele Nuru truly hit the mark on a different concept. Nuru’s choice of knit textiles in varying concepts was stunning and uncommon. Nuru’s line was seen in the spring/summer Fashion Show on Friday, Feb. 24, using a mix of dynamic colors and utilizing creative ways to deliver what is crochet knit. This piece was stunning on the white runway, as well as on the model. The purple tones really defined the raw texture of Nuru’s designs, resulting in an extremely unique way to mold diligent creativity into an everyday piece. The wide-necked design on the clavicle sold the piece as an outstanding way to wear something traditionally seen as a hobby. The touch of buttons, the glitter within the crochet pattern and a bronze choker stand out against the textures covering the model’s body. 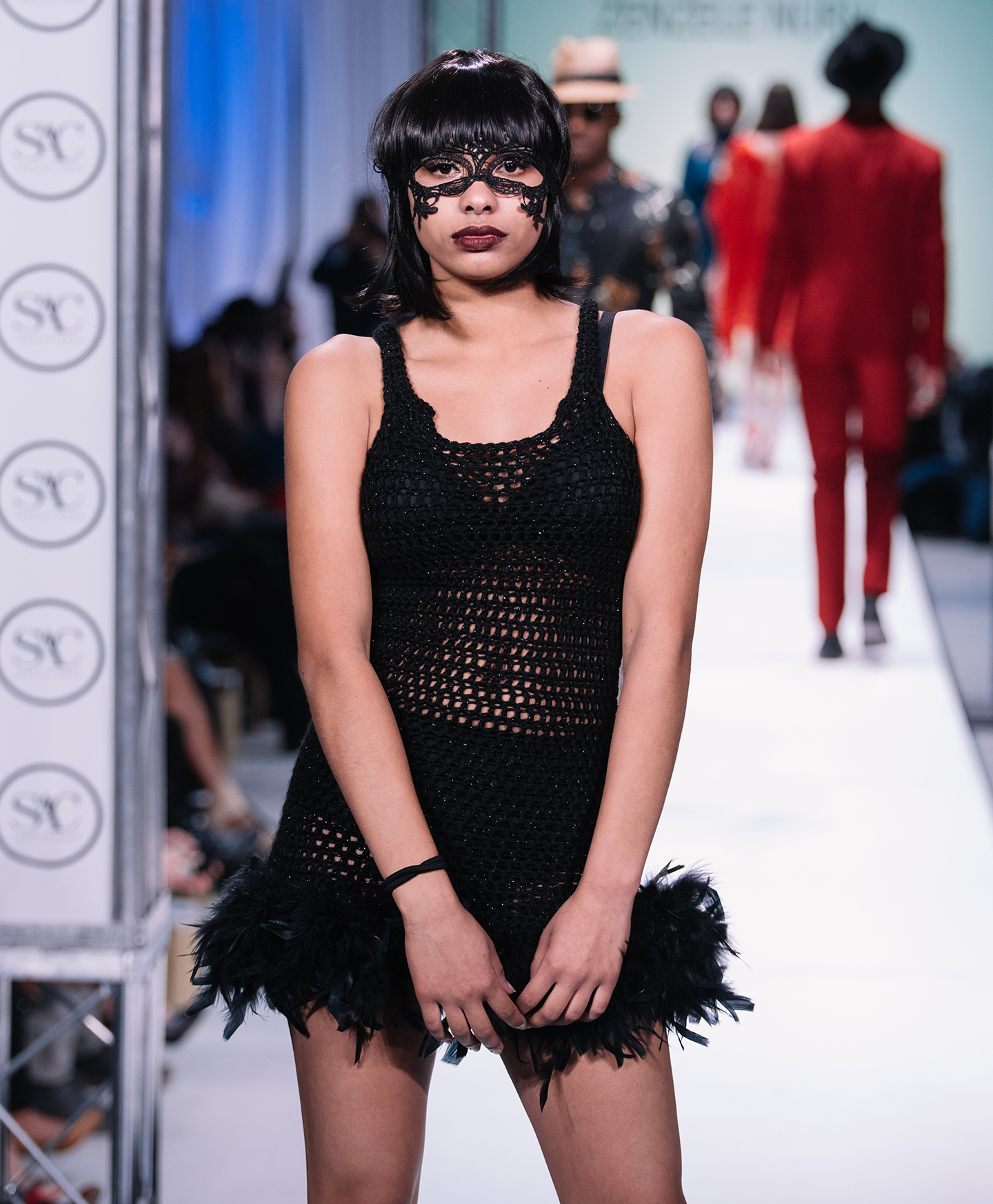 7. The ‘20s flapper influence, yes! Nuru also paired feather with her knit pieces. As seen in this look, the masquerade-enhanced black dress worked perfectly with the ambiance of the show. The sheer top enhanced the daring concept of her textile—nothing appeared lined. The dramatic wig creates a composed, yet mysterious overall look to this piece. The feathering on the bottom of the dress matches the fun swing to the model’s wig. A small black arm band and dark lips gave ravishing playfulness to this concept. 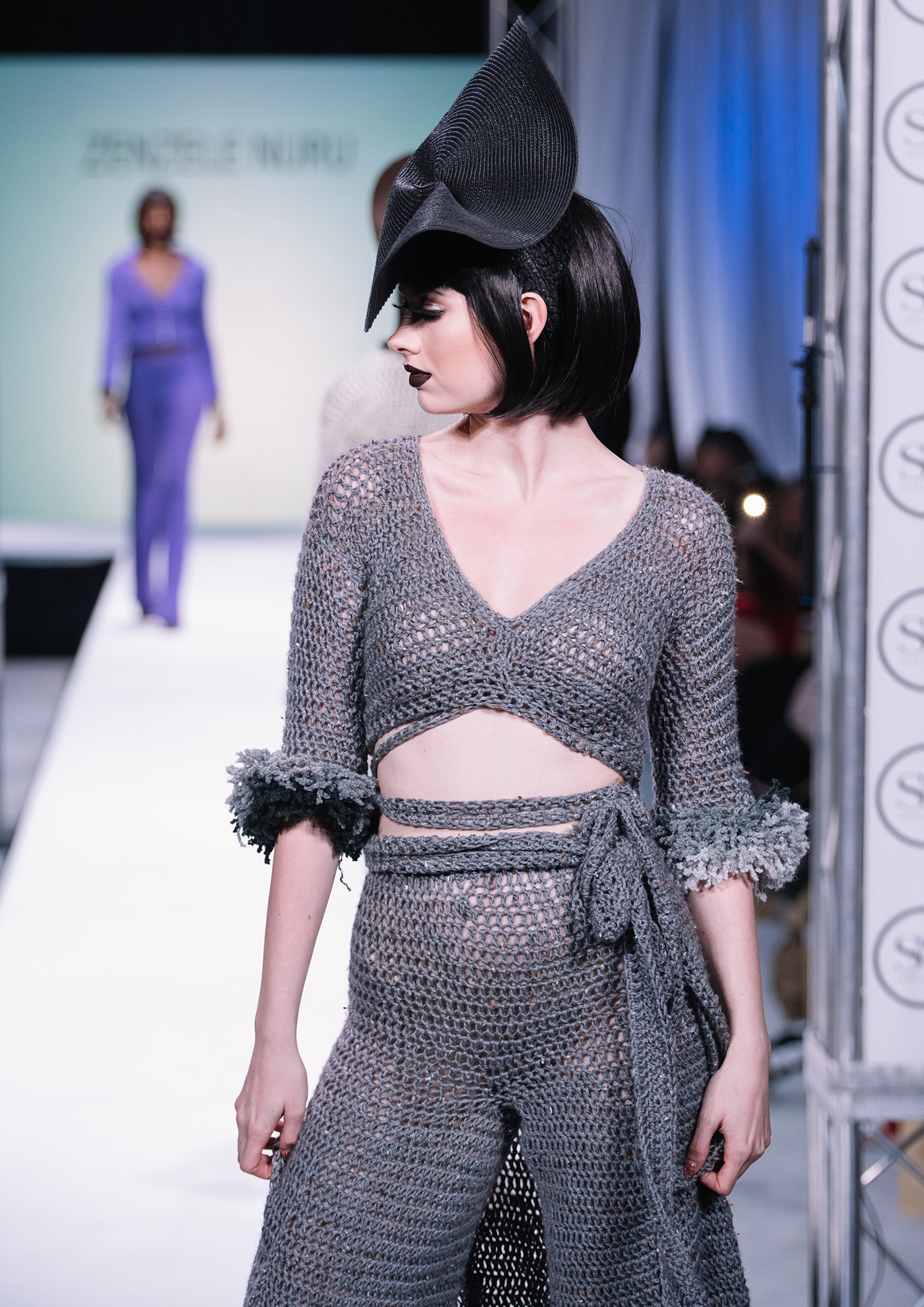 8. The continual creative concepts Nuru came up with were pleasantly overwhelming. In this look, Nuru added a three-dimensional piece as headwear to her line. The abstract shape shielding her model’s face added dimension to her collection’s textures. Nuru used a bushel of cool colors to frame the arm, adjacent to a rope belt she placed around the model’s waist. The feminine and mysterious quality of these three details were striking on the runway, while the muted color-scheme portrayed animalistic portrait views. 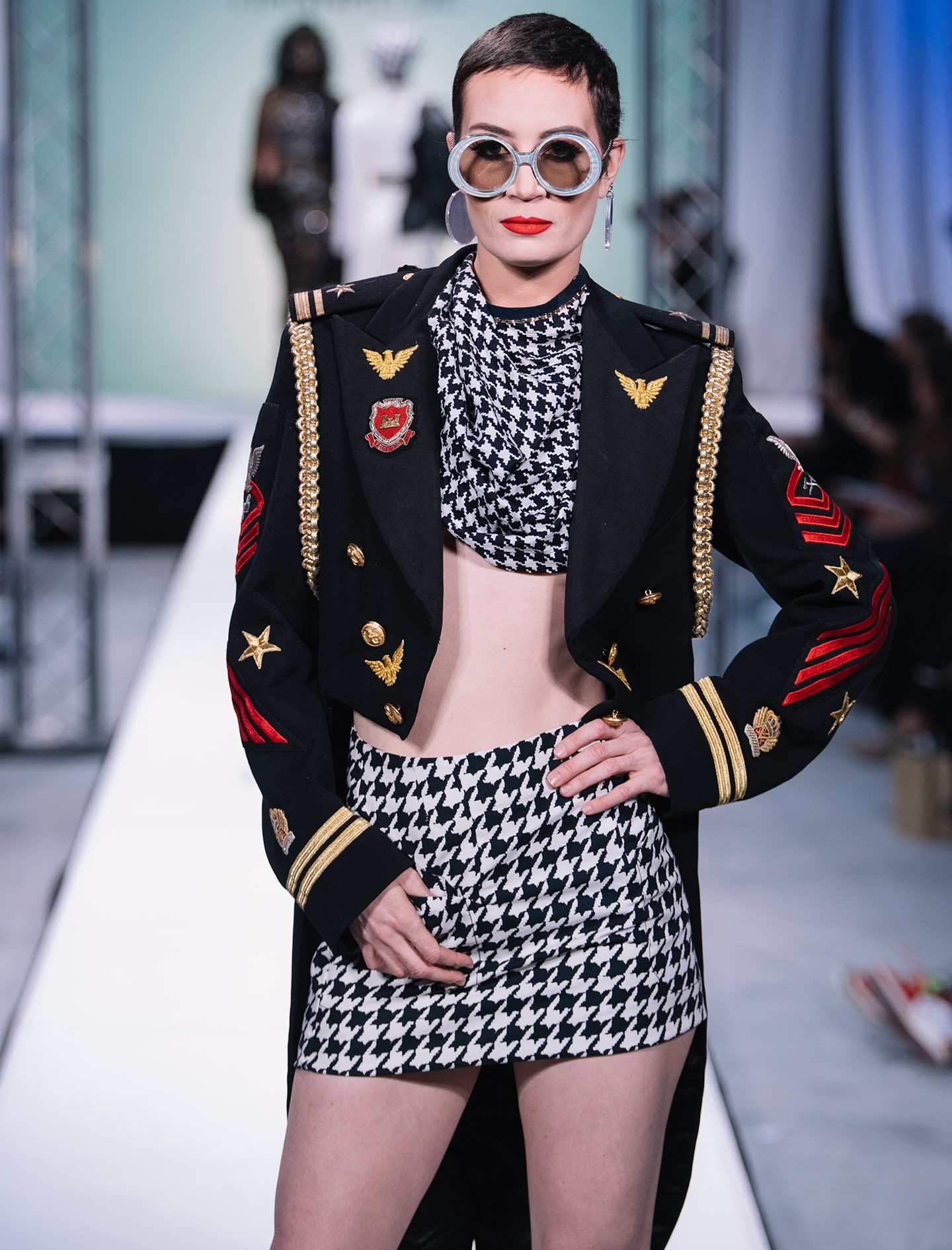 9. Hannah Be, the final designer of Sac Fashion Week, incorporated multiple eras into her collection. This outfit pulled distinguishable 1960s, ‘70s and ‘80s looks into one piece that was truly remarkable, but also similar to what we’re seeing in stores around the country. Greyish blue disk earrings complemented the enormous ‘70s mod sunglasses, which were further accentuated by the model’s short pixie cut (love!). The additional mix of ‘80s moto jacket, mustard-yellow socks and a herringbone handkerchief top and skirt gave a tremendous nod to many notable looks from the past 30 years. 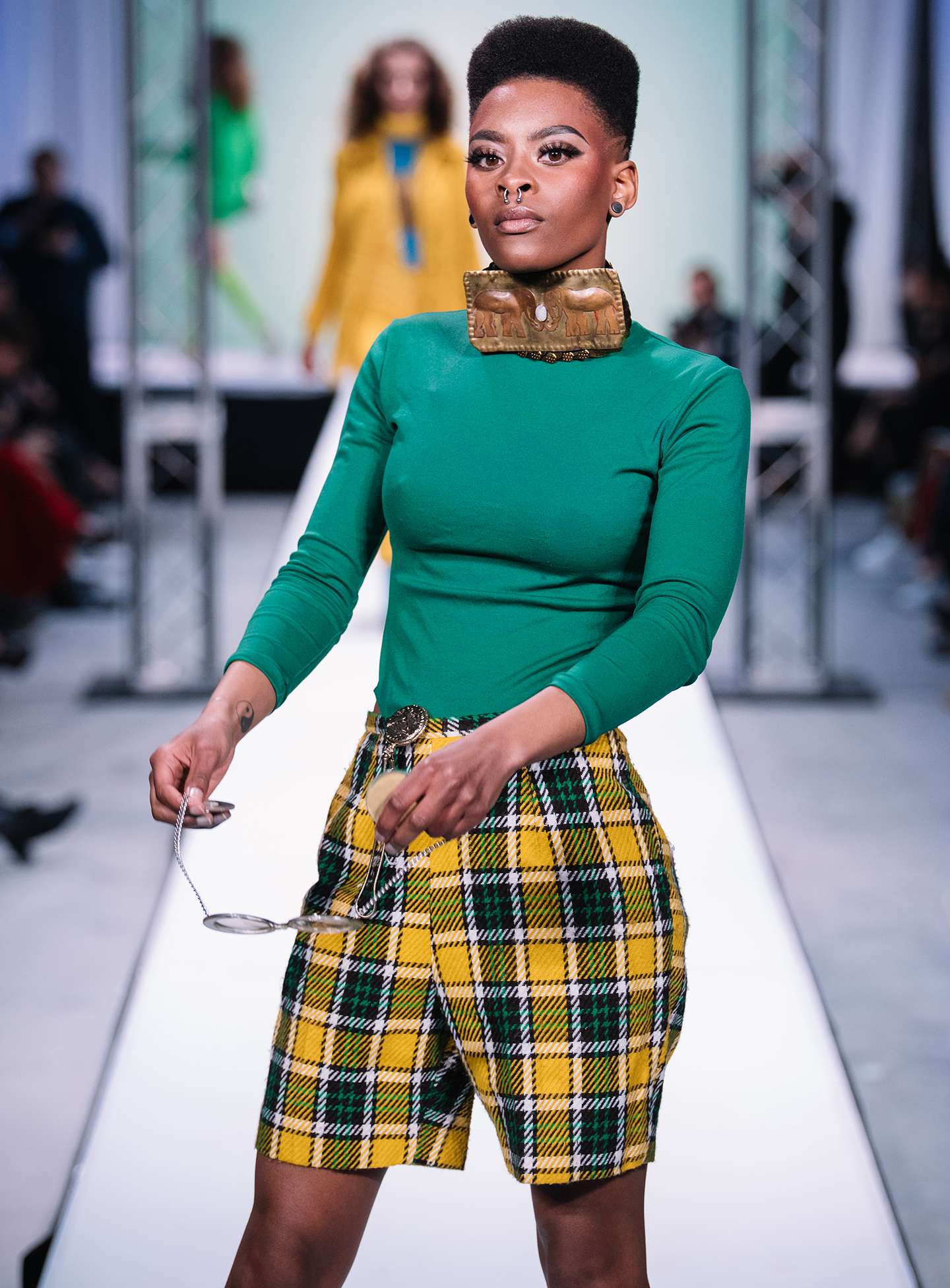 10. The flat top. Yes, the flat top. Be styled another boisterous piece, pairing ‘70s plaid detailing with ‘90s, well, everything else. The vibrancy and tones of Be’s green tight-fitting top paired with a brash and wonderfully gaudy choker set the mood for her entire collection. The use of high-waisted yellow shorts resembles an outfit you’d find Will Smith wearing on set in 1995. Be’s use of gender-neutral pieces made for an array of outfits and vibes that are seen in popular trends of today. Be paired obnoxiously chunky spiked heels on top of socks that read so well and so fierce to the crowd. Lastly, there’s a slight tribal motif added to this kick-ass outfit. An enlarged septum piercing and a bronzed, rectangular, elephant-embellished neck piece drew added attention (if possible) to this look. Be kicked it up a notch, closing out the spring/summer portion of Sac Fashion Week.

The multitude of differing looks among designers is what made Sac Fashion Week different, but expressive to the state of a progressive city and its ever-growing art scene. Sac Fashion Week aimed for rich, detailed collections. While nostalgic and futuristic in its influences, the seven designers and their works in the spring/summer showcase did not fall short.

Sac Fashion Week is evidence of Sacramento’s growth. We’re all here for it.