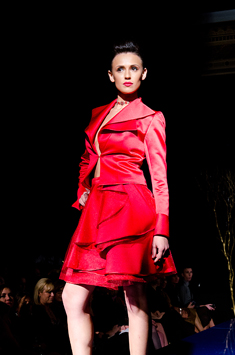 The catwalk at the Elks Tower Ballroom had been dominated by the sexy, the doll-like and the glamorous up to this point. 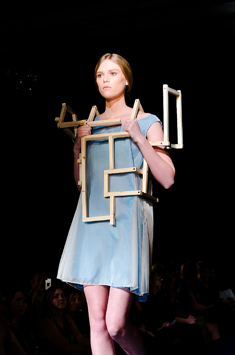 Now the energy in the room had taken an unexpected turn, when, one after the other, a sequence of models took to the stage, each wearing a different shade of the same sleeveless, A-line dress with the same unblinking, empty stare. The clicking of camera shutters and flashes doubled in speed. Mysterious classical music guided the models in their solemn walk down the runway, each one wearing a maroon, sky blue, tangerine orange or pink dress with flats. Atop their stiff shoulders rested oversized wire or wooden cages confining their arms and necks. Some of the cages were crafted from Jenga-like wooden blocks, while others were wire-wrapped, strung with bits of moss or glass baubles. 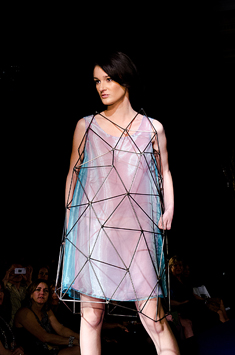 This was local designer Amanda Chan’s line, ZuBauen, closing the first night of Sacramento Fashion Week’s designer showcase. Sacramento designers brought color and flair to the showcase at the ballroom Friday night; however, no designer statement had been more artistically profound than Chan’s.

For about two hours, models strode on the runway beneath high ceilings and chandeliers, flanked by rows of chairs on either side, not an empty seat in sight. To the left, booths filled with VIP guests hung overhead. 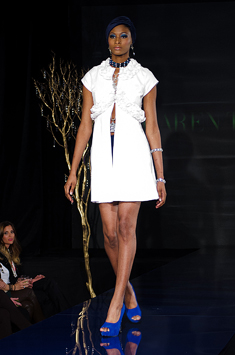 If the designer showcase was a realistic projection of what is in store for women’s fashion this spring and summer, then expect a lot of trousers, high-waist pants, short dresses and skirts, drape-y tops and tailored blouses and jackets. 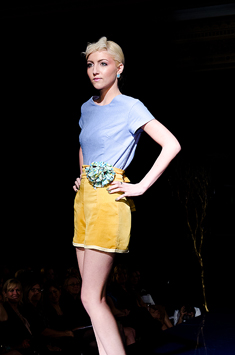 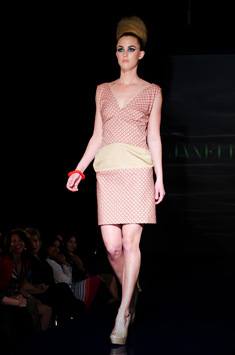 A remixed version of Nancy Sinatra’s “Bang Bang (My Baby Shot Me Down)” and Amy Winehouse’s “Love Is a Losing Game” appropriately accompanied Cardenas’ models along the runway. The looks were palpably ‘60s-inspired, as the models brandished huge beehives atop their heads, matched with heavy eyeliner, red, patterned prints and above-the-knee sleeveless dresses. 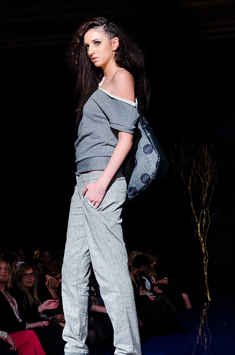 Kim’s designs were subtler. Her models sported big, crimped hair with mostly gray and relaxed yet elegant pieces. Several outfits were matched with clutches and handbags. Gray shorts, trousers and miniskirts were paired either with an off-the-shoulder sweater, a tunic or an asymmetrical tee.

Sue’s line mixed funky and casual pieces, muted tees and tank tops paired with short floral skirts and makeup that popped. Models entered the stage to the beat of MÃ©tisse’s “Boom Boom BÃ¢” wearing combinations like an above-the-knee skirt matched with a purple tank and turquoise lipstick; an orange, gray and white dress with gray lipstick; or a short, a black vest over a tee-dress with turquoise lipstick. 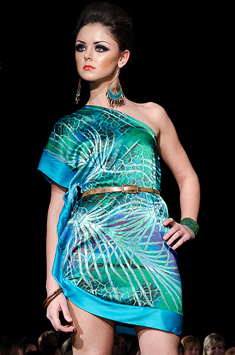 Brighter and more colorful was Aguilar’s skin-baring line, complemented with a flurry of electro music. Models approached the crowd in a flashy fusion of sherbet colors: an orange top matched with bright purple harem pants, a dress with yellows, blacks and pink, a blue flutter sleeve dress with an orange necklace. The cuts were sexy–open-backs and cut-out shoulders, thigh-high dresses, and strap-y or strapless tops.

Rosh’s clothing brought a comparable level of va va voom to the runway, balanced with sexy elegance. The first of the models emerged in a white, loose-sleeved blouse and ink-black, floor length skirt, while another model wore a brown, elbow-length blouse combined with a pink, loose, asymmetrical skirt. Other models traipsed onto the runway in tube or ruffled mini-dresses, completed with elbow-length, satin gloves or blazers. The final ensemble took the cake: a floor-length bright red sparkly dress. Jessica from Who Framed Roger Rabbit? immediately came to mind. 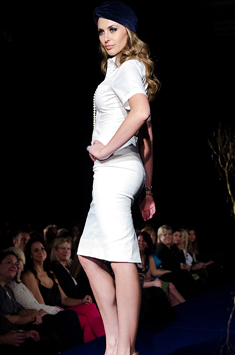 Templet’s theme, White on Ice, was characterized both by elegance and sophistication. One by one her models appeared on the stage, their looks tailored and classic, in blouses, trousers and cap-sleeved jackets. Adding touches of glamour, the looks were accessorized with blue turbans, chunky crystal necklaces and royal blue, peep-toe heels.

Templet herself had played a large role in orchestrating Fashion Week. It had been no easy task, she reminded the crowd just before the showcase. The chaotic nature of organizing this kind of event is an indication of the goal at hand, she explained to the audience. The aim of the showcase, and of Fashion Week, is to elevate Sacramento to its rightful capitol status, she said, and make sure that New York happens here.

Considering New York fashion involves substantial edge, this vision may be in the distant future. Most attendees of the showcase played it safe in attire choices themselves. The women showed up in solid-colored dresses, chunky platform heels, colorful blazers, and sequin tops and skirts abundant. The ratio of women to men in attendance at the showcase was about three to one, an eclectic mixture of middle-aged and younger guests in the crowd. The men in attendance, particularly the photographers, appeared dapper, but also played it safe, clad in bow ties, white suit jackets, and dress shirts with vests.

There was the occasional spotting of bold fashion statements–teased hair, a crystal-embellished black fedora, a colorful Betsey Johnson necklace with a protruding plastic bird on it, or trendier pieces–i.e. black floppy hats and high-waist skirts.

But for Sacramento, this is perhaps as New York as it gets.