All in the Details 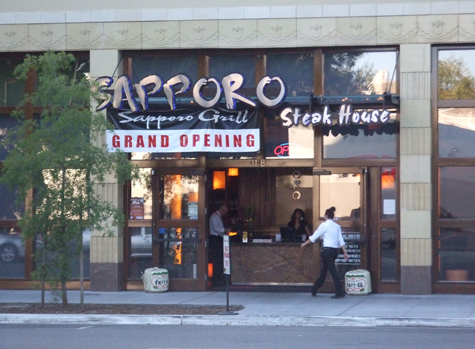 New restaurants pop up around Midtown occasionally. But let’s face it food fans, quite a few new eateries have appeared in the past year. Space is limited on the grid, and we’ve seen restaurant development begin to slow its roll—but not before Sapporo Grill Japanese Steakhouse opened its doors on prime Midtown real estate in the beginning of July.

This Japanese steakhouse, bar and teppanyaki grill nestled on 16th Street between K and J streets is, I learned on my visit through its wide open glass doors last Monday, a premium spot with meticulous attention to detail.

Admittedly, my knowledge of both steak and Japanese cuisine isn’t vast. But my server Erin informed me that Sapporo Grill has some tricks up its kimono sleeve. For example, all of their beef is the highest grade of USDA beef—USDA Prime. Sapporo Grill offers kobe beef that is actually raised in Japan, while most restaurants offer kobe beef raised elsewhere, like Australia, she said. And, many places offer ahi tuna (tuna from Hawaii), but Erin said Sapporo Grill has maguro tuna, also from Japan.

I started out with the nigiri maguro (two pieces for $4.50). The color was a lighter mauve than that of ahi tuna. I found the flavor to also be light, with a slight overtone of citrus. The texture was, of course, melty and the large pieces of maguro were lovely.

I ordered the filet mignon as my entrÃƒÂ©e. For just $24, which seemed almost too reasonable, the USDA Prime filet was served with yuzu mashed potatoes, a salad and a side. I choose Japanese cucumber salad, sunomono, and asparagus. The sunomono was clearly house pickled; not vinegar-y, quite sweet and wonderfully topped with toasted sesame seeds.

Yuzu is a small citrus fruit in which the rind is often used as a zest in adding flavor to foods, much like lemons. The yuzu mashed potatoes were a fine consistency. I had to reach to catch the flavor, because its starchy texture made finding subtle tastes more difficult. The small, delicate stalks of asparagus were grilled nicely. Plate presentation included a sprinkling of “Japanese spice,” a blend of ground red pepper flakes and white and black sesame seeds. It looked like allspice and overpowered the flavor of anything it touched. I recommend asking for this on the side, or to be removed.

Even with all the great sides, the filet mignon was shining star of the dish. And it was large. No question that it was a whole eight ounces and beautiful, with tasty char grill marks. The beef was well seasoned and prepared perfectly medium rare as per request—just the right amount of melt in your mouth tender meat in the center and just a bit chewy on the grilled outside. I was surprised when it arrived at the table and it was bacon-wrapped. Although filet mignon is often, but not always, prepared with a strip of bacon around the outside for flavor, the menu at Sapporo didn’t say the filet was served this way.

My early evening visit was nice, but I didn’t get to see Sapporo Grill in full sushi roll mode. But based on the quality of the food, service, dÃƒÂ©cor and ambiance, if the buzz spreads about this place, it’ll likely become one of the “it” spots around Midtown.

The high, industrial ceilings and largely slotted, light wood partitioning walls give the restaurant an open feel. With large television screens, open seating couch area, glass VIP room, booth and table seating and facing teppanyaki/sushi bar and liquor bar, Sapporo has everything you could want in a restaurant. Late hours on Friday and Saturday nights with an in-house DJ make Sapporo into somewhat of a venue where Sacramentans can hob-nob until 2 a.m. Too bad there’s no stage.

Yeah, this place isn’t cheap; premium food and atmosphere will always cost you. You get what you pay for. But prices aren’t as pretentiously premium as one would think.

Sushi (nigiri, maki, sashimi and specialty rolls) prices are on par with other comparative area eateries.

Need an impressive place to take a date? Going out for a special occasion? Meeting up for a business meal? Getting dressed up and grab a drink? I do suggest Sapporo Grill. The little details are meticulous and brilliant and make the restaurant a wonderful metropolitan addition to Sacramento. Be prepared for metropolitan prices. But if you’re real city folk, you know it’ll be worth it!