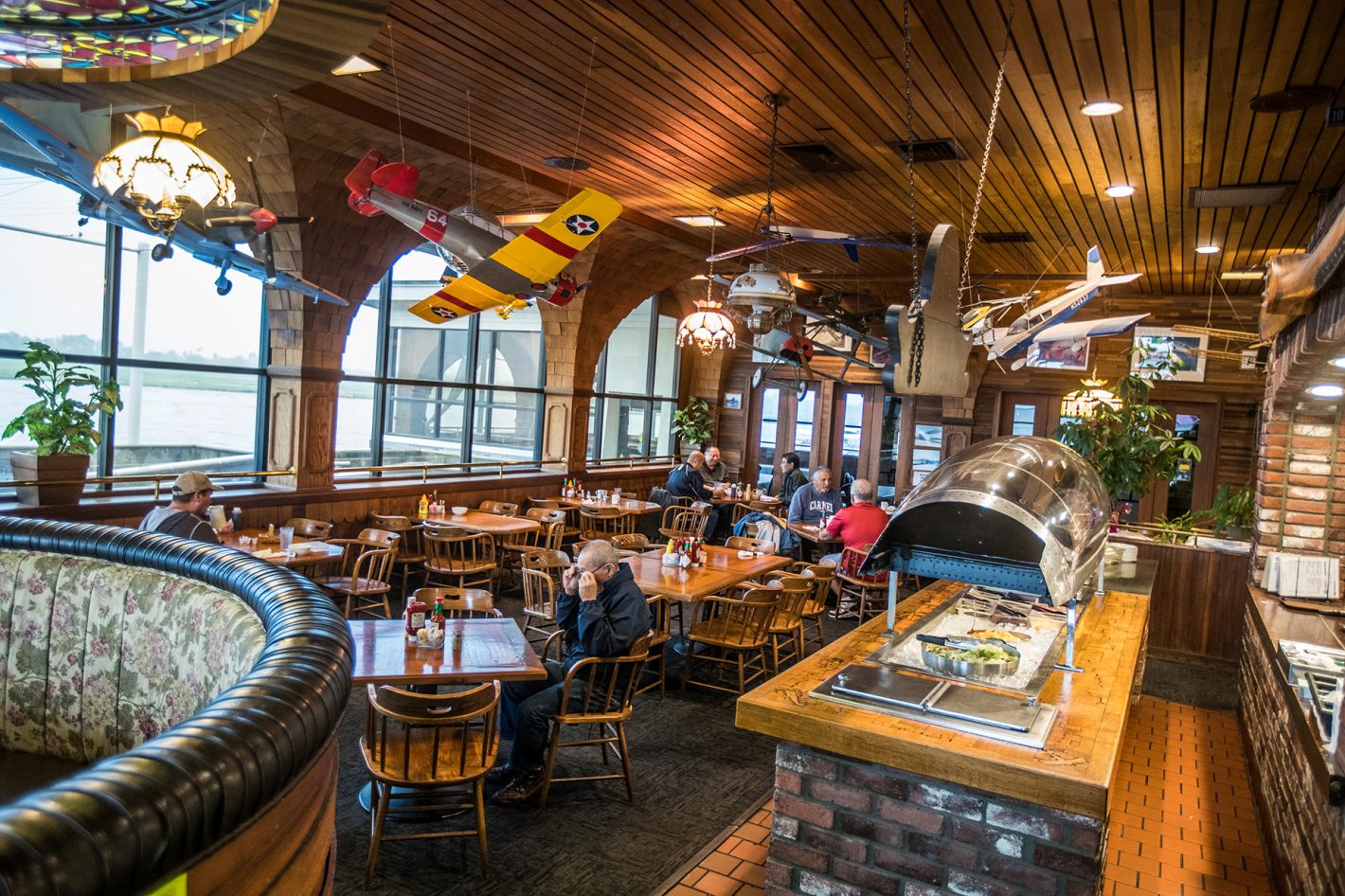 I’m a huge fan of themed restaurants. I’m not talking about places so full of random memorabilia that it looks like a thrift store blew up on the walls. I mean a restaurant on a boat. Dinner in a castle! I’ll forgive the gut-rending nastiness of Chuck E. Cheese pizza to see singing robots and someone walking around dressed as a giant rat. I will even enjoy the sublime blandness of The Spaghetti Factory if I get to eat in that fucking awesome train car. I can’t explain it, but nostalgia makes food taste better. It takes me back to sitting in a McDonald’s in San Lorenzo, California, that had a giant biplane in the middle of the dining room you could eat in. If you wish you could eat in an airplane, Aviator’s Restaurant on Freeport Boulevard right by Sacramento Executive Airport is a dream come true.

Aviator’s Restaurant is an amazing relic that time seems to have forgotten. It first came to my attention six years ago when my son’s eighth grade class thought it would be a great idea to get up at the crack of dawn and have a 7 a.m. breakfast while we watched the sun rise and planes take off. Aviator’s has a near 180 degree view of the airport allowing you to look at tiny planes and jets take off and land while you eat. I was grumpy, tired and against it, but damn if it wasn’t a fantastic experience.

When Submerge asked me to write about Aviator’s, I jumped at the chance to experience it with a more observant point of view. I showed up with our photographer, Nicholas Wray, and he was an old pro with food stories. He ordered an off-menu specialty of breakfast fried rice with two fried eggs on top. That sounded so amazing that I had to eat them, too. But I’m a rookie at this shit, as Nic reminded me, “It’s usually a good idea for us to order different things!” I really wanted that fried rice though, and I’m glad I ordered it. The portions were so huge neither of us could finish, and I’m a big old fat guy, so that’s saying a lot. 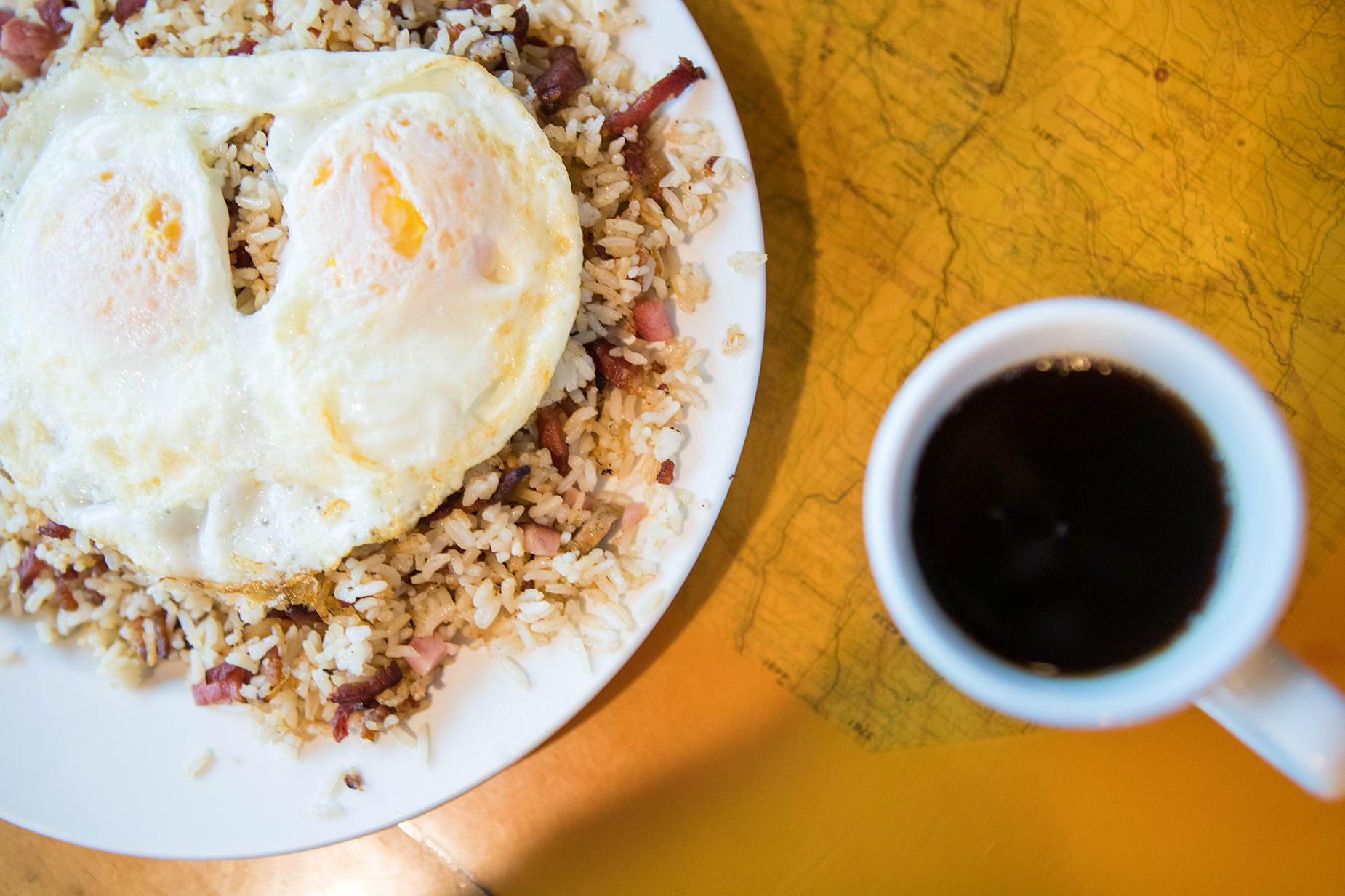 The waitress was a perfect professional, with a no nonsense efficiency. The coffee never got less than 75 percent full, and for some reason they replaced our oversized Tabasco bottle twice. We asked if she was cool with us taking pictures and she replied, “I can’t stop you!”

Soon, a guy wearing an apron who was chatting up the table next to us heard we were writing a story and scooted up. I asked if he was the manager and he laughed, “I’m the manager, the cook, I’m whatever you need me to be!” Turns out I just met Chick (just Chick), who says he opened Aviator’s 19 years ago. I thought the place seemed way older than that, and I was right. The place was originally a Red Baron restaurant, which Chick says was a chain that was located near airports all over the country. According to a Sacramento Business Journal piece written by Lynn Graebner in 1997, Red Baron closed in 1986 and the site was empty for 11 years. It was a short lived music venue and eatery called The Stick Rudder Restaurant and Jazz Club before Chick took the place over in 1999.

The model airplanes hanging from the ceilings were given to Chick by appreciative clients. 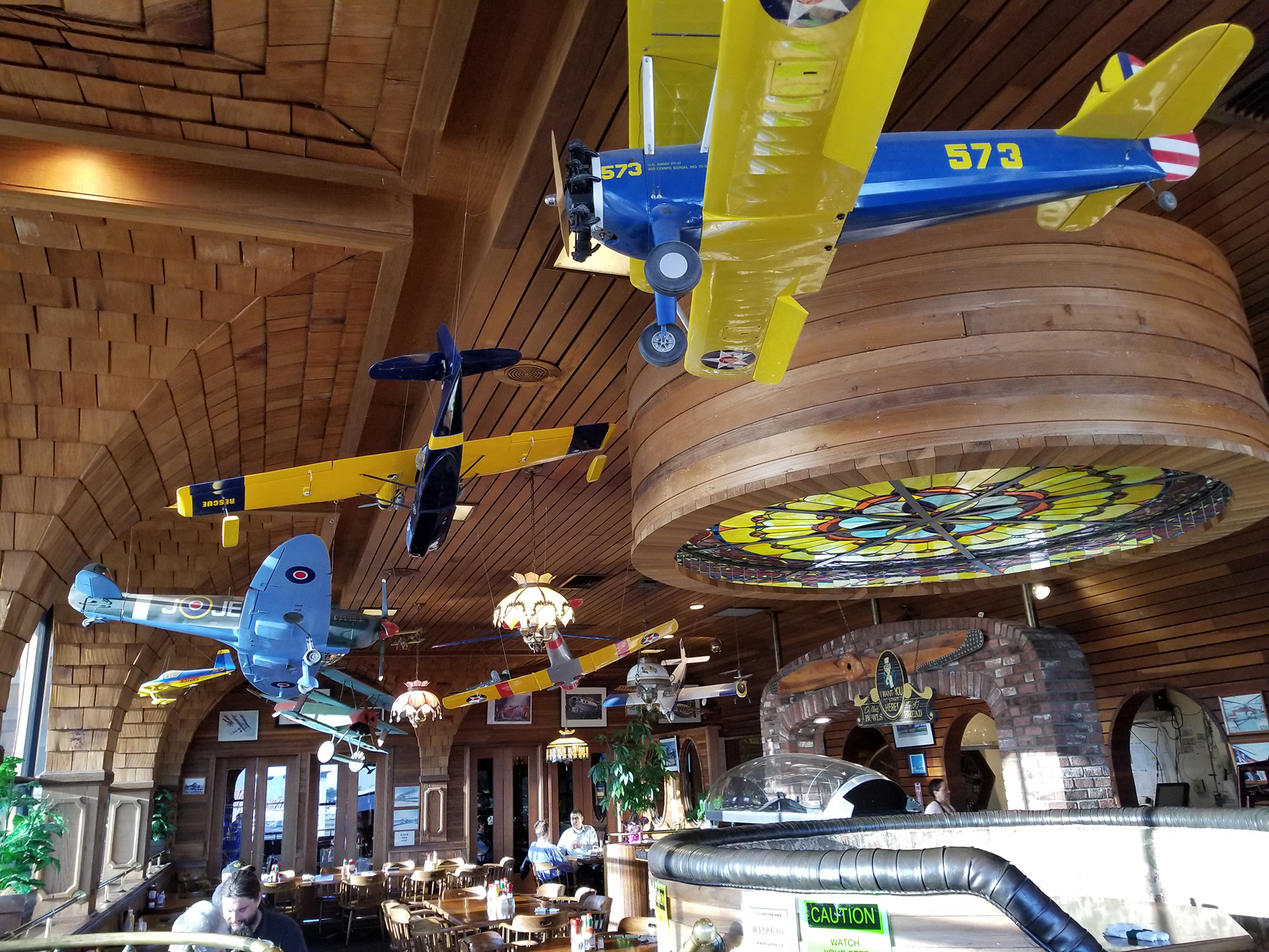 “I put a card with their phone number in each one, so if I ever close this place, I’ll call them to give them back!” he says with a smile. He also admitted that the regular dusting and cleaning of those planes is no easy task.

Chick says he came from Hong Kong and opened this place shortly after arriving in America. He’s one of those personalities that lights up every table he visits. He told me tales of above and beyond customer service and making the largely senior citizen clientele happy with a pure and honest glow about him.

I had to come back, because I saw there was chicken fried steak on the menu, and damn if that isn’t the best thing in the world you could possibly eat. As it turns out, the chicken fried steak at Aviator’s is one of the best that I’ve ever had, and this is coming from a guy who’s easily eaten more than 300 of them in his lifetime.

Served with home fried potatoes, two eggs and toast for a reasonable $9.25, the chicken fried steak was a work of art. The batter coating was flavorful, crisp, but not so crisp that it was armored. The meat inside was juicy and wonderful. The white gravy on top was seasoned perfectly, making for a heart-stopping jubilee of goodness that I haven’t experienced in a long time. I honestly felt so good eating this, it felt like having my first kiss all over again. 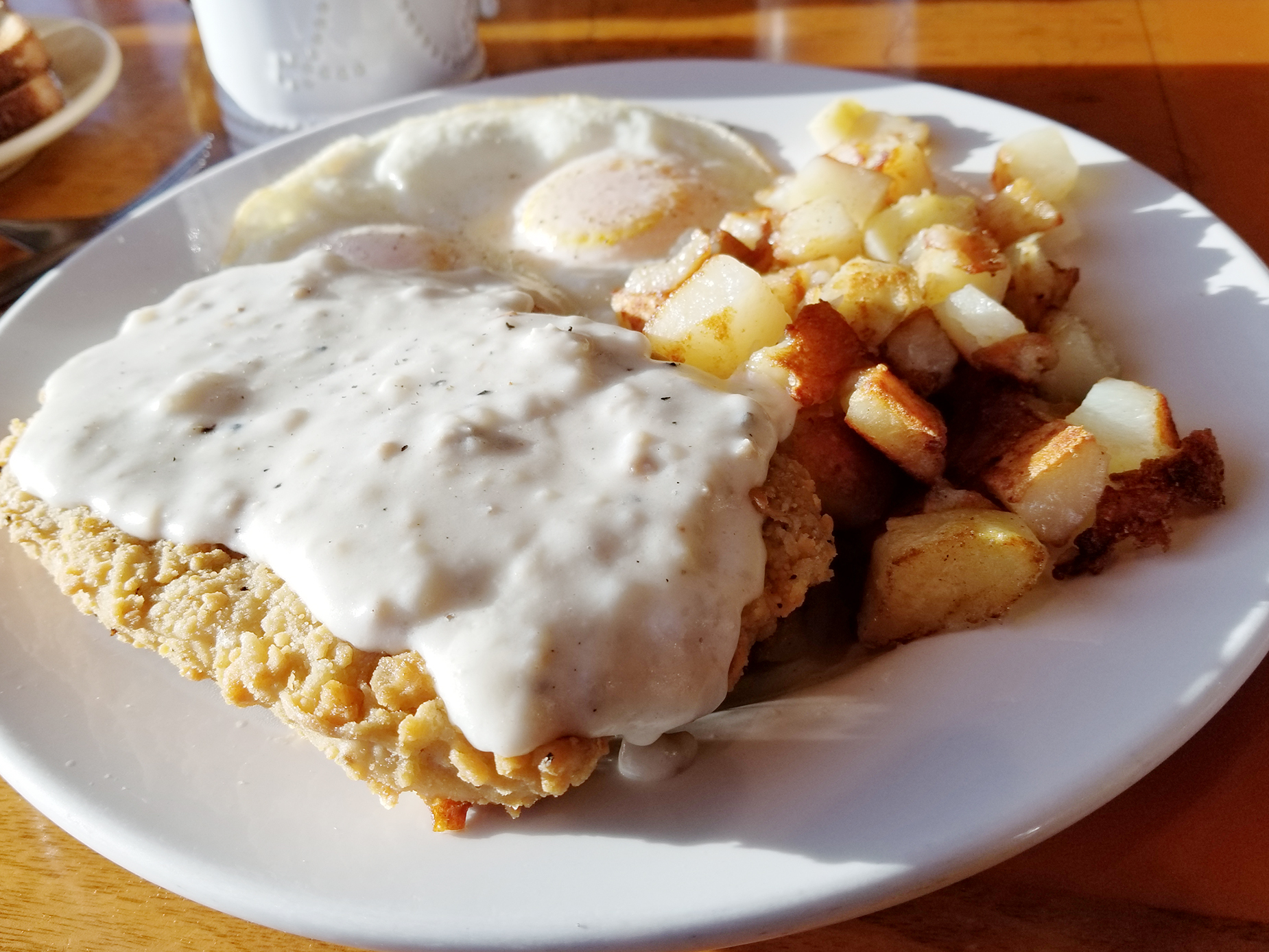 I moved on to the over easy eggs that were cooked to perfection. I broke up the yolks with my fork and stir the potatoes inside, the way The Bible tells you to eat them, and put ketchup, black pepper and a dash of Tabasco on top. After that was gone, I cleaned up the yolk puddle with the buttery slices of wheat toast I was left with. I opened up my calendar app and crossed another week off my life expectancy and walked out with a smile on my face.

The coffee came good and black in a nice ceramic mug that had cool bumps and a mysterious letter “K” on it. It was your standard coffee, and it was refilled continually. I could probably eat here every day. The food is great, but I’d even come back just for coffee or soup and stare at the amazingly weird decor. There are booths that look like something out of a Star Wars movie, with padded entry ways and dark wood. Chick told me that he thinks the booths are supposed to look like an airplane sticking straight up with the opening and table resembling a cockpit. All I know is that it looks like some place Yoda or Ewoks would love eating in, and I think it’s awesome. 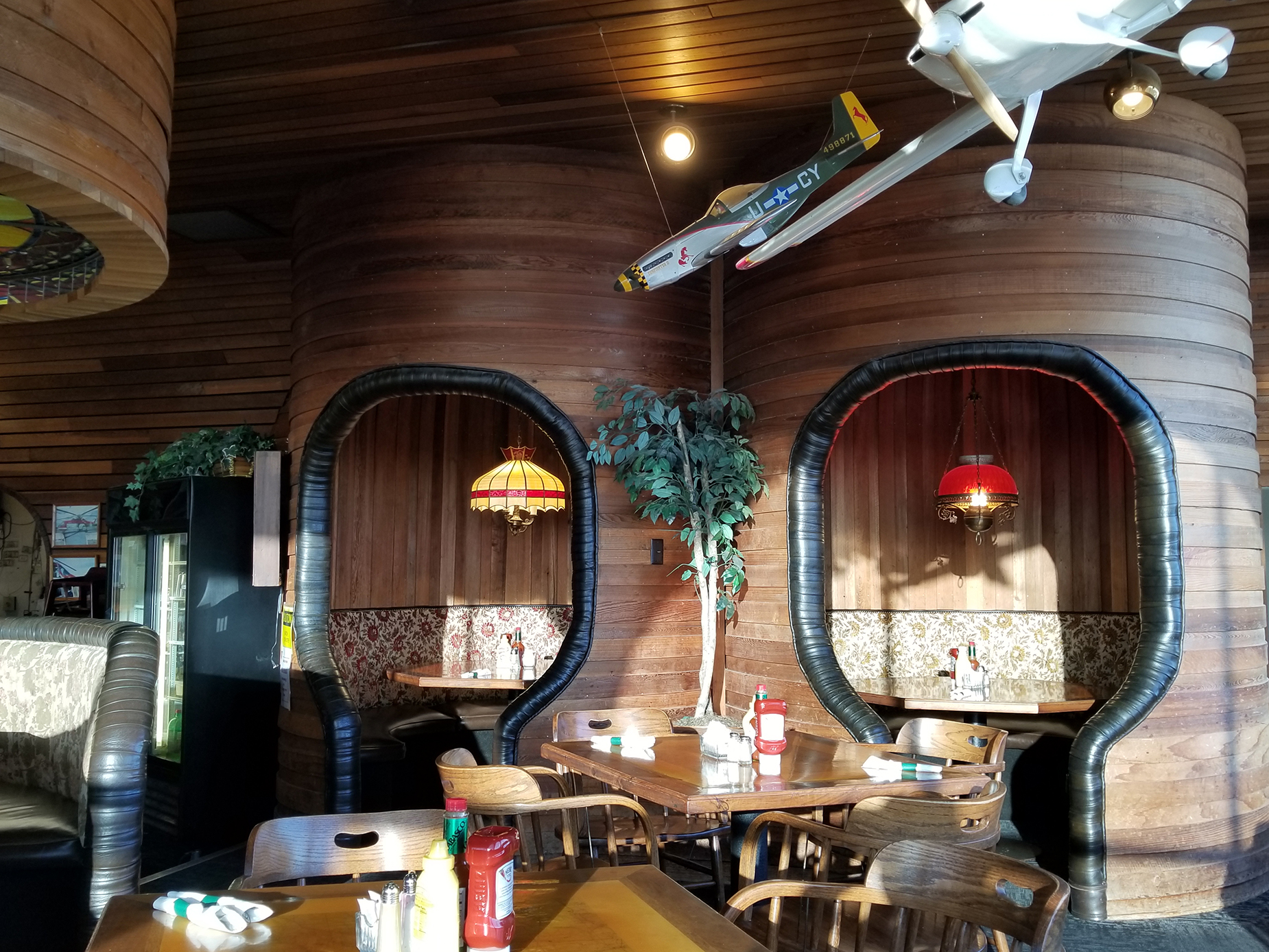 Everything on the menu is reasonably priced, far below what you’d see at Mel’s or Denny’s. They’re open 7 a.m.–3 p.m. every day for breakfast and lunch, but on Friday and Saturday they have extended hours for dinner until 9 p.m. They also have a soup and salad bar from 11 a.m.–2:30 p.m. Monday through Friday, for just $7.95. Definitely show up early, and the place is known to have quite a line on weekends, but there’s worse places to wait and stare at things. You can look around the airport lobby and even enjoy the vintage restrooms, which look just as clean and marvelous as they were when they were probably built in the ‘60s.