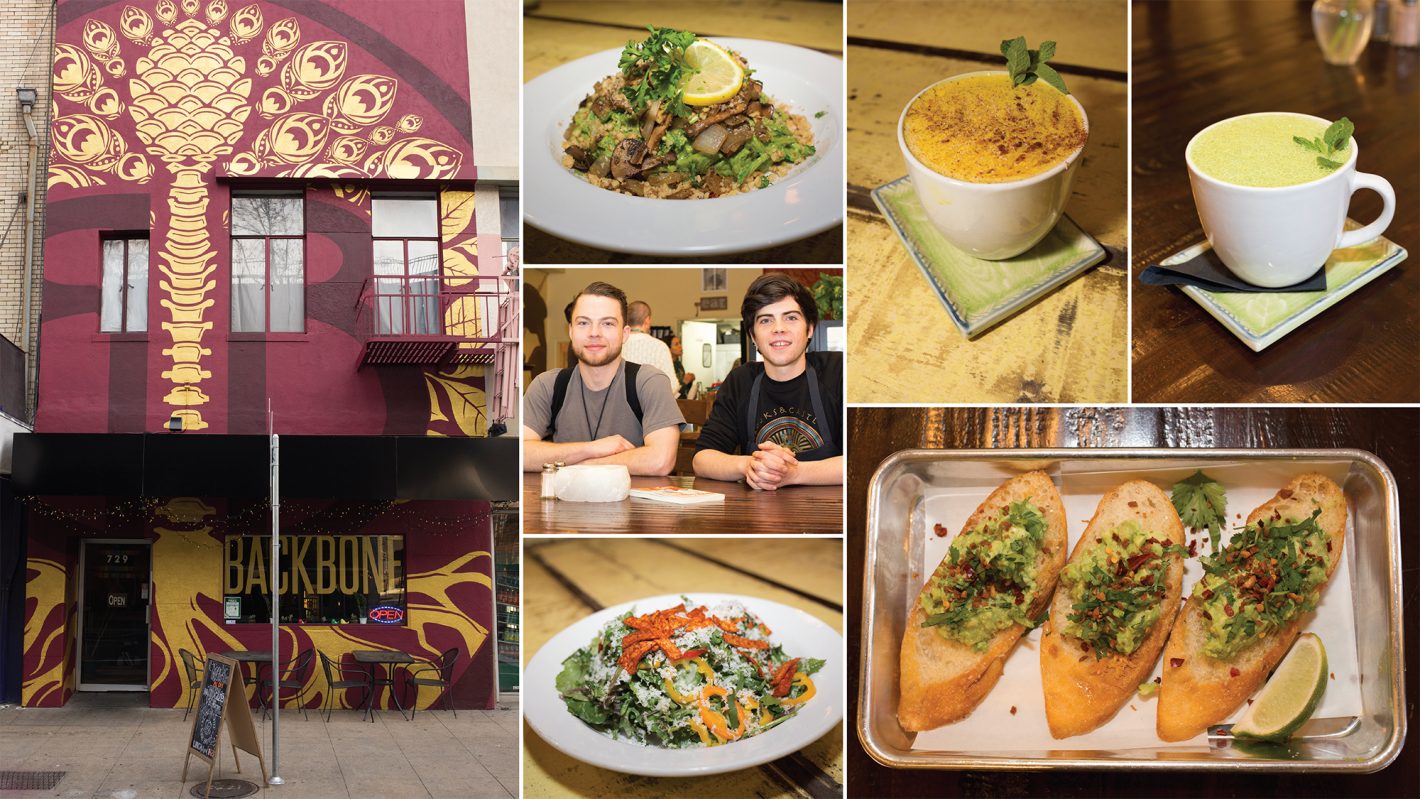 The plant-based eating trend that has been steadily taking hold of the bellies of mainstream Americans has officially taken root in the City of Trees. And while the trend is one that has been resolutely embraced by those indoctrinated into the cult-like world of Instagram, where millennials collect likes for their photogenic plant-based dishes like coveted Pokémon Go characters, as well as the diehard lifers who renounced meat decades ago, once mocked for their “alternative” lifestyle, it only seems fitting that more and more Sacramentans are trading in their steak knives for cauliflower steaks. This is America’s Farm-to-Fork Capital, after all.

According to the restaurant consultancy group Baum + Whiteman in New York, “plant-based” is poised to be the food trend of 2018. And Sacramento is right on trend—Meatless Mondays at Old Ironsides has been going strong since 2015, while a slew of vegan and vegetarian-friendly restaurants have been popping up all over the region.

Enter Backbone Cafe. Owned and operated primarily by brothers Joey and Tomas Woolston from the family of restaurateurs who launched Matteo’s Pizza and Bistro in Carmichael in 2009 and the Crocker Cafe by Supper Club in the Crocker Art Museum, this newly minted eatery in downtown Sacramento boasts a menu chock full of organic, whole food options to fit a variety of dietary preferences—including meat options, but the grass-fed, free-range variety only. What you won’t find are refined sugars or sweeteners, soy products or peanuts in any of their handcrafted dishes, say the brothers Woolston.

“We’ve always been involved in food, for as long as I can remember,” says Tomas. “We’ve always had a passion for food—it’s just what our family has always done. It’s been a big part of our gatherings and our family culture. We’ve all had experience in pretty much every area of the restaurant business, so it’s something we know really well and feel comfortable doing and we’re all interested in athletics and nutrition and well-being, so it was kind of a way to just bring it all together. We’ve always struggled to find the kind of food that we want, so it’s great for us because it’s pretty much the restaurant that we always wanted to be in Sacramento, but we just hadn’t seen it yet.”

The menu is a testament to this ethos: Brimming with luxurious ingredients like in-house, homemade coconut milk, which serves as the basis for their rich and velvety golden milk and fragrant curry dishes, the offerings at Backbone are fully customizable. This is no small feat for a small eatery that upon entry reads like more of a comfy book store with its large, overstuffed leather couch and pub chairs and inviting, wooden family-style dining table anchoring the dining area.

For Joey, a longtime athlete in the mixed martial arts arena whose self-described obsession for creating the perfect “human fuel” inspired the dishes at the newest addition to the Woolston culinary empire, being able to curate your own culinary experience at Backbone is paramount. It was after an injury knocked him out of the ring that the Woolstons’ fast-casual restaurant emerged—an operation that reads more like an incubator for wellness potions and the food-as-medicine philosophy than a traditional vegan joint. Sidelined by a back injury, Joey soon hatched the idea to develop a business that would marry his passion for the sport with his lifelong experiences in the kitchen.

“I want everyone to have the opportunity to get whatever they want,” Joey says. “Because of that, we have been getting a lot of athletes in here, which is a good thing. You can tell when it’s an athlete that comes in because they’ll be like, ‘Extra meat, no rice,’ [and] all kinds of other edits to the dish. That is a positive thing for everyone because it’s relatively easy [to do] here.”

With Tomas running the front of house and Joey manning the kitchen and developing a menu that boasts an extensive array of highly customizable dishes constructed from exotic ingredients inspired by Thai, Mexican and Indian cuisines, the Woolstons have relied on a tight-knit crew of longtime employees to execute their vision. That vision unites nutrition fit for an athlete but tasty enough for the foodie looking to get down on a grass-fed beef bone marrow with bacon jam and toasted sourdough. Yes, that too, is on the Backbone menu.

On a recent visit to the café, the attention to detail in each of the dishes that were presented was profound. Take the vegan zuccado pasta dish. Sure, we’ve seen spiralizer mania seep its way into just about every vegetarian dish that landed on the plate last year, but Joey’s meticulous handling of the zucchini “noodle” is almost scientific. After curing the long, verdant strands overnight in a saltwater bath, they are transformed by a luscious basil-pesto sauce into a dish even the most diehard pasta lover would be happy to dive into. The dish is completed with spinach and sautéed mushrooms, but the crown jewel comes from the texture provided by the pulverized, sprouted walnuts sprinkled atop, a clever nod to parmesan cheese.

Another sensational Backbone offering, inspired by Joey’s tinkering with his own nutrition during his MMA days, is the curry. Built on a framework that combines Thai and Indian spices, the curry is fully customizable. Don’t like meat? Go for their hippie hemp curry, a mélange of golden, roasted veggies adorned with organic hemp seeds. You say you’re a full-fledged carnivore? Fuel up on their grass-fed beef version. Prefer the original white meat? Well, you’re in luck, there’s a free-range chicken option as well.

In a nod to the ubiquitous taco truck, even the street taco makes its way onto the Backbone menu. True to their vision, the Woolstons provide options here, too, but it’s their vegan carnitas that truly shine. Joey takes delicate oyster mushrooms and braises them for hours in a rich concoction of avocado oil, peppers and onions. The process transforms the mushrooms into an unctuous, tasty amalgamation that when it finally finds its way into a corn tortilla truly reads as a suitable impersonation of the original version.

Rounding out the menu are a litany of beverage options of the non-alcoholic variety that continue in the same vein as the food offerings. If you’re feeling adventurous, try their keto coffee, a version of the butter-infused coffee concoction that’s been on the lips of many a coffee connoisseur for years, made with MCT oil and grass-fed butter. You can also power up with their bas-a-loupe blended beverage, a symphony of flavors when basil, avocado, cantaloupe, banana and lime forge into a single, harmonious creamy crescendo.

Fun fact: Backbone serves breakfast all day, sort of like Denny’s but healthier! Pick up one of their fancy egg and cheese tacos made with free-range eggs, goat cheddar and salsa verde, or jump on that other food trend bandwagon and grab a slice of avocado toast topped with fried garlic, cilantro and chili flakes on the way to the Light Rail station. Better yet, take the morning off and sink into a comfy chair, grab a book and sip on one of their creamy nut milk offerings. Pro tip: Go for the golden milk brimming with fresh ginger, turmeric, honey and nutmeg. It’s like a warm, comfy blanket for your soul and your belly.