Preservation & Co. Destroys the Competition with its Famous Hair of the Dog Recipe

Although its inventor and for whom it is named are disputed, the Bloody Mary has elevated from its basic tomato-juice-and-vodka origins and can be, in skilled hands, the most complex cocktail in the universe. Take, for instance, Preservation and Co.’s Bloody Mary Mix, an award-winner made right here in Sacramento, which contains the perfect balance of about 25 ingredients that provide its spicy, savory, salty and tart flavor profile.

Preservation and Co., an LLC operated by Jason Poole, is a specialty foods, small-batch production facility and retail space on 19th Street across from Safeway. It all started with his renowned Bloody Mary recipe that he served at Pour House when he worked there as general manager. Using his Bloody Mary Mix, lemon pepper vodka and Sriracha salt (with the usual assortment of pickled vegetables and lemon), he created a recipe that earned him first place in the state for the Absolut Bloody Mary Contest, then later second place at the national contest in New York.

I cruised by Poole’s retail shop and warehouse to chat him up about Preservation and Co.’s backstory, the space, his product offerings and his goals for his company. The shop is well put-together, inviting, and—hint, hint—a great spot to score unique gifts for Christmas and other occasions (also, local restaurants like Pour House, Red Rabbit, Hook & Ladder, Hock Farm and over a dozen others pour his Bloody Mary recipe using Preservation and Co. products if you want to sample the goods without having to lift a finger). 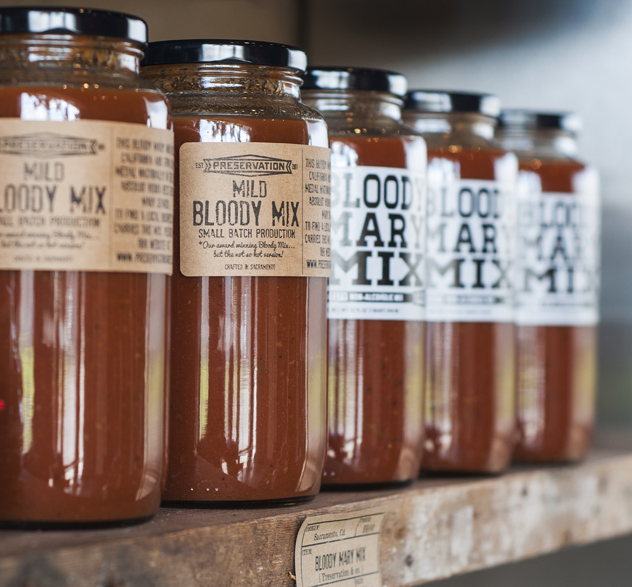 After you placed second in the nation for the Absolut Bloody Mary Contest, is that when you decided to go into business producing your Bloody Mary Mix?
Yes, that’s when we decided to start making the Bloody Mary Mix. I started out making jams and jellies in 2011, and that first company was called Bar in a Jar, because we were making jams and jellies based on cocktails. After that, I got into pickling more, just because of the space that I had—it was easy to produce pickles. I really just did farmers markets in my free time. Once the Bloody Mary came through and it was so popular, that’s when we decided to make it into a full production facility, and get our own space instead of using restaurants.

And how did you choose this space?
I was naive enough to think that I could probably run this and Pour House at the same time, which was completely and utterly false. So I saw a sign one day when I was walking to Safeway that said this space was available. I called the landlord and it was great for the retail because of the rollup door, and it also has a warehouse space in the back, and it was nice and close to Pour House. So the size seemed like it was pretty good, although now I already realize that it’s a little small—3,200 square feet got small really quickly.

How has business grown since you guys opened?
Business has been good! We took a long time to open up, about 22 months to get through all the permits and construction, so that kind of set us behind, but in that time we were still able to get distribution. Now the Bloody Mary Mix is available in just about 200 places in California, and we just started shipping out samples to new distributors in Colorado, Arizona and New Mexico, and hopefully we’re going to be in Oregon and Washington by the end of next year.

I noticed in the shop that you carry a lot of other vendors’ products, not necessarily all local…
We carry a lot of local products, and the other vendors are some small companies I found from across the nation that I really liked—small companies that go for the same values as we do of all handcrafted products. A lot of them I just heard about through social media, or they’ve had Kickstarter campaigns like I did, or they’ve been on Food Network or things like that. I wanted to make sure that we had that unique lineup that people can’t find in other stores in town.

You mentioned a commonality in values with these other companies—can you tell me about what those values are?
Basically just knowing where your ingredients come from, not just co-packing at some facility in Omaha or something and ordering by the pallet; actually making it yourself and standing behind your product instead of just shipping a recipe off… I wanted to make sure that we were part of it from beginning to end. With this retail, being able to show people the face of the company, I wanted them to be able to look back through the window at the kitchen and see where their food is being made. 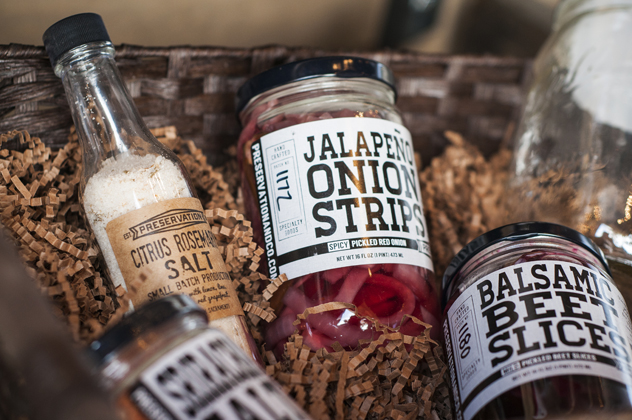 You do only small batch production on all the products here?
Yes, it’s technically all small-batch production. Obviously we have had to increase the size of the batches we make—with the Bloody Mary Mix we used to only make 55 quarts at a time, and now we do a 35 gallon batch, but certainly still small in the world of specialty foods. With produce, obviously it can be difficult to ensure consistency. We only make the pickled asparagus when it’s Delta asparagus season, because I haven’t liked the crop that comes from anywhere else. Delta asparagus is really nice and sweet. So that’s only available certain times of the year. The furthest that we like to go [for produce] is the Bay Area, but we get it as local as possible whenever it is in season.

Why is that important to you?
It’s important to keep things in our area; it’s fresher when it gets to me, and the fresher you pickle it, the better the pickles will be. And people actually care about making it, as opposed to some of the larger farms that just crop dust it all and ship it out on a truck. Specialty foods are higher priced, for a good reason. We’re making sure that we’re using good quality ingredients.

In what direction do you envision the business going?
We’re hoping to expand next year. Right now there’s just a couple of us working here, we’re hoping to fill our staff up. As long as we’re getting into what I call the Left Coast “L”, which is Oregon, Washington, California, New Mexico, Colorado, Arizona… that’s going to be a great starting point for us to build our company and get closer to national distribution. Next year we’re going to start doing classes, teach [people] how to do pickling and how to make jams and jellies; we’re going to have a Guest Chef Series to invite chefs from around town to talk about what they do best, and also we’re going to be doing events with an open-house feel where people can come in, take a look, try some stuff, and that will be a no-cost thing to have people in our community come together and talk about food. 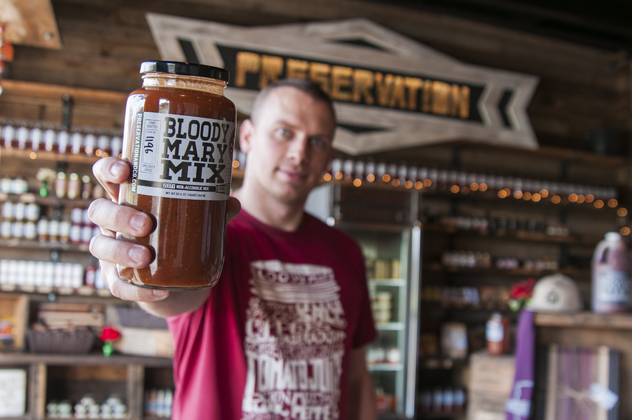