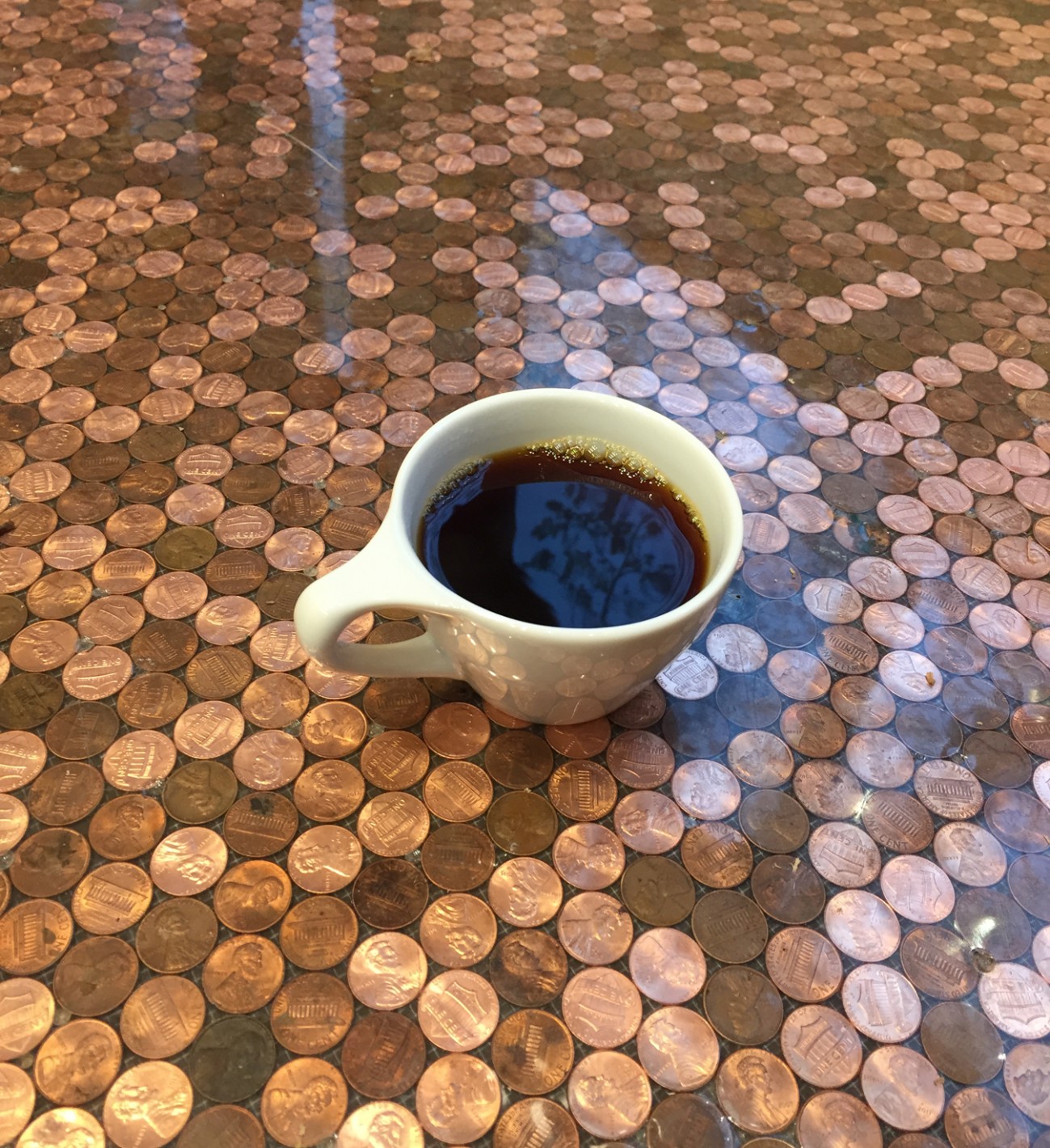 A Review … Really, a Love Letter

Confession: I’m pretty obsessed with coffee. It makes my world spin ‘round. It makes my heart thump in a way that no man ever has. Before I migrated to Sacramento from the Deep South, I worked in coffee. I learned to appreciate the origins, the roasting process and the various brewing methods that are sometimes so delicately labor-intensive that you question your sanity (homemade cold brew, anyone?). And in case you didn’t notice, Sacramento is rich with craft coffee options. It seems as though new shops are popping up left and right, each offering its own unique flavor to the local coffee culture; it’s an exciting time to be a coffee nerd. So when I heard the Caffeine Crawl was coming back to town, I knew I had to hop on it like a toddler to a cake. 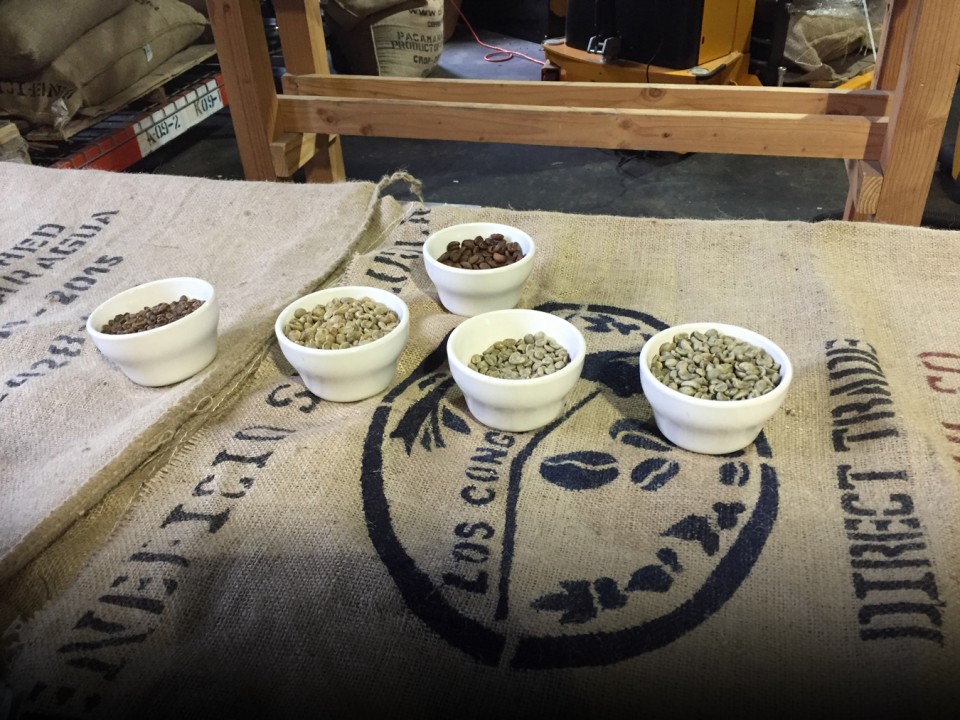 Created by beverage marketing firm The LAB, the Caffeine Crawl functions in the same spirit of the traditional pub crawl, only minus the, uh, spirits. Instead of getting drunk during the Caffeine Crawl, you just get jittery at the most. With six different “choose your own adventure” routes highlighting nearly a dozen different shops and roasteries, you’ll either be walking, biking or driving to your location, where you’ll spend half an hour learning and (hopefully) sipping. After attending the Crawl in 2014, I knew to expect a lot of local coffee, conversation and a sense of adventure; particularly because the forecast called for rain. Lots of rain. I’ll give you one guess, dear reader, which type of route your narrator chose.

That’s right. I got rained on. A lot. But it did not dampen my spirits as I sat down with about 20 other Crawlers in a cozy bar area at 2 p.m. at RailBridge Cellars downtown, which was the first and last stop on our walking tour. After a warm welcome from the host of the Crawl and part of The LAB team, Sadie Renee, our eager group leaned in collectively to listen to Nick Young, the head roaster of Vaneli’s in Rocklin, as he described the methods of making a blended coffee. We sampled four coffees: three single origin coffees (a Brazilian, a Guatemalan and an Ethiopian) that were blended together to create the final blend, a pleasantly mild coffee that Young playfully coined “Creme de la Crawl.” As we sipped, we discussed flavor notes and the nuances of what makes a great cup. “There is no wrong answer,” Young said of our notations, “everyone has their own concept of the perfect cup of coffee.” 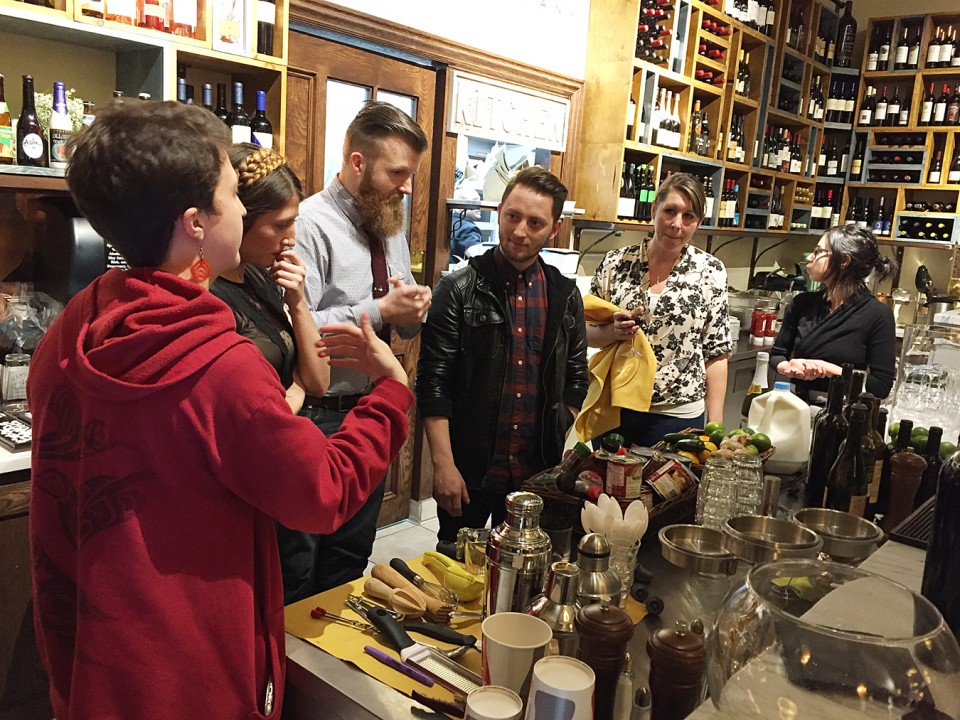 The second stop of our tour found us at Insight Coffee Roasters on Capitol. There, we got to see roasting in action: a small “sample roaster” set up in the main café area. While the head roaster talked about the process of roasting, I was hit with a pang of nostalgia. The smell of coffee roasting reminded me of when I first started drinking coffee back in Alabama at this little shop/roastery, where every morning I found myself picking coffee chaff out of my hair from their ventilation system. I didn’t mind at all. The process and burning-chocolate-smell of coffee toasting has always triggered a Pavlovian response from me: it’s coffee time.

After another proper soaking from Mother Nature on our grand quest, we arrived at The Mill. My favorite coffee shop in town. We piled into the narrow space and listened to Nick Minton, the owner, talk to us about the special “coffee float” that he made just for us. I don’t remember what else he said after “Humphry Slocombe ‘Secret Breakfast’ bourbon and corn flake cookie ice cream with double-infused coffee syrup cold brew” … it was all a blur, guys. There was a spoon, and a gibraltar, and I’m pretty sure I saw God at the bottom of it. It’s not on the menu, but rest assured that their dreamy affogatos aren’t going anywhere (except, you know, in your face). 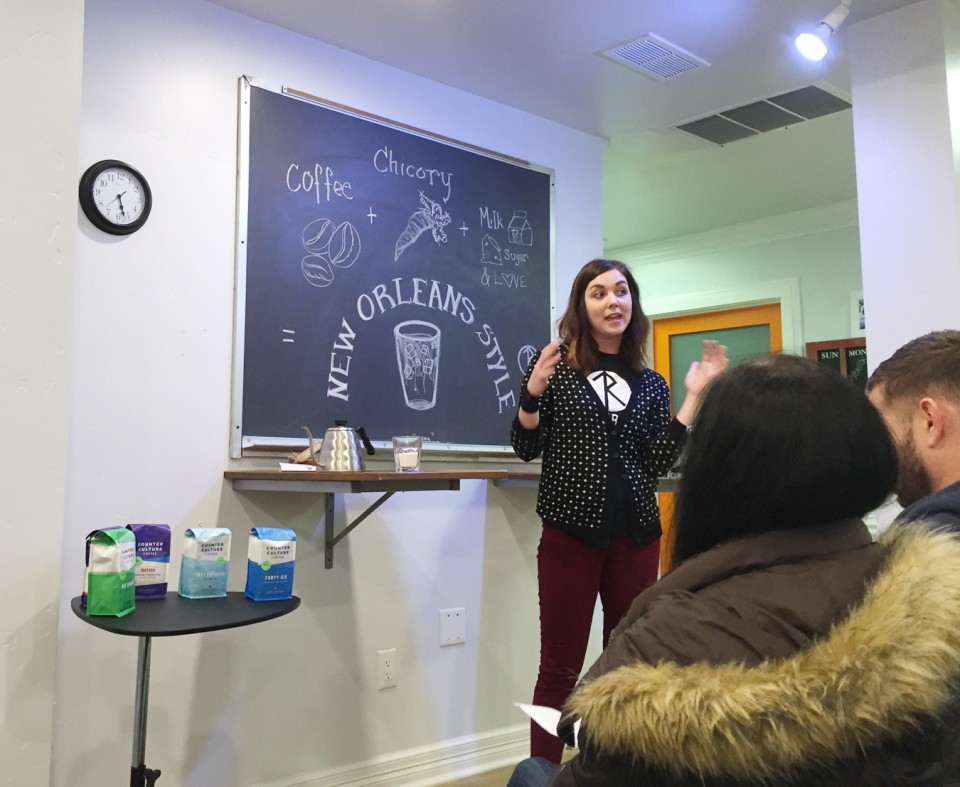 The last coffee stop of the evening found us at The Trade, which is a unique concept shop in that it focuses on “coffee and coworking,” where you can not only enjoy a cup of Counter Culture coffee, but also rent a conference room or private working space for a fee. We gathered in their main space to learn how to make one of their signature drinks, the New Orleans Iced Coffee. We were given a recipe, a small bag of beans and a sudden and intense desire to make our own at home (or was it just me, guys? Was it?). 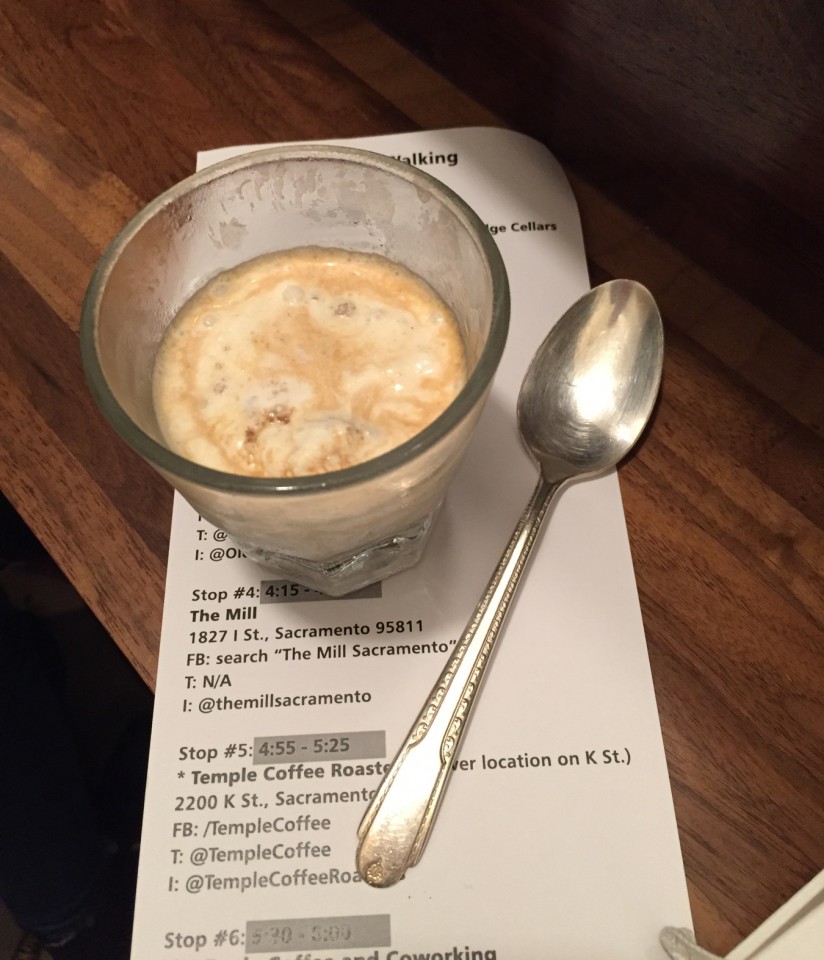 As the Caffeine Crawl wrapped up with a coffee “mocktail barista competition” at RailBridge Cellars, I reflected on the day. I was rain-soaked, a little bit jittery and suffering a bit of FOMO about what went down at the other shops on the route (Chocolate Fish, Shine, Pachamama, Naked, I’m looking at y’all), but I couldn’t help but smile. I spent the day with a couple of pals, a bunch of strangers and my true love: coffee. If the Caffeine Crawl was created to bridge the gap between consumers of all types and the artisans that bring us that damn fine cup of joe, then they succeeded on all levels, rain or shine. It’s like a cup of coffee—interpreted in many ways, none of them wrong. It is exactly what you need it to be. 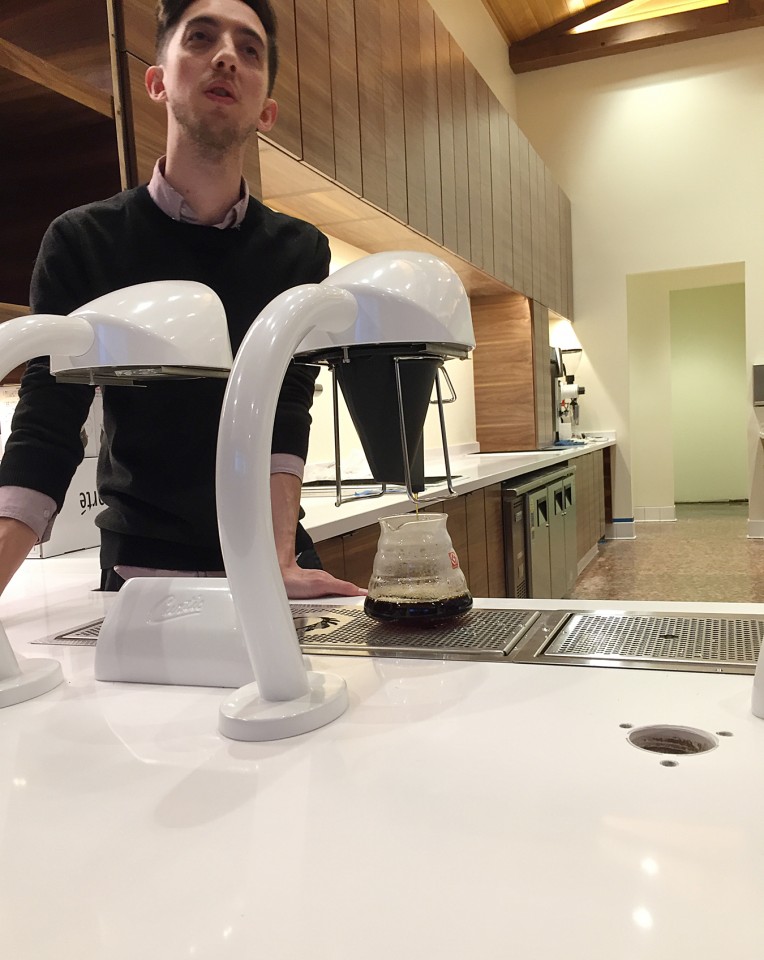