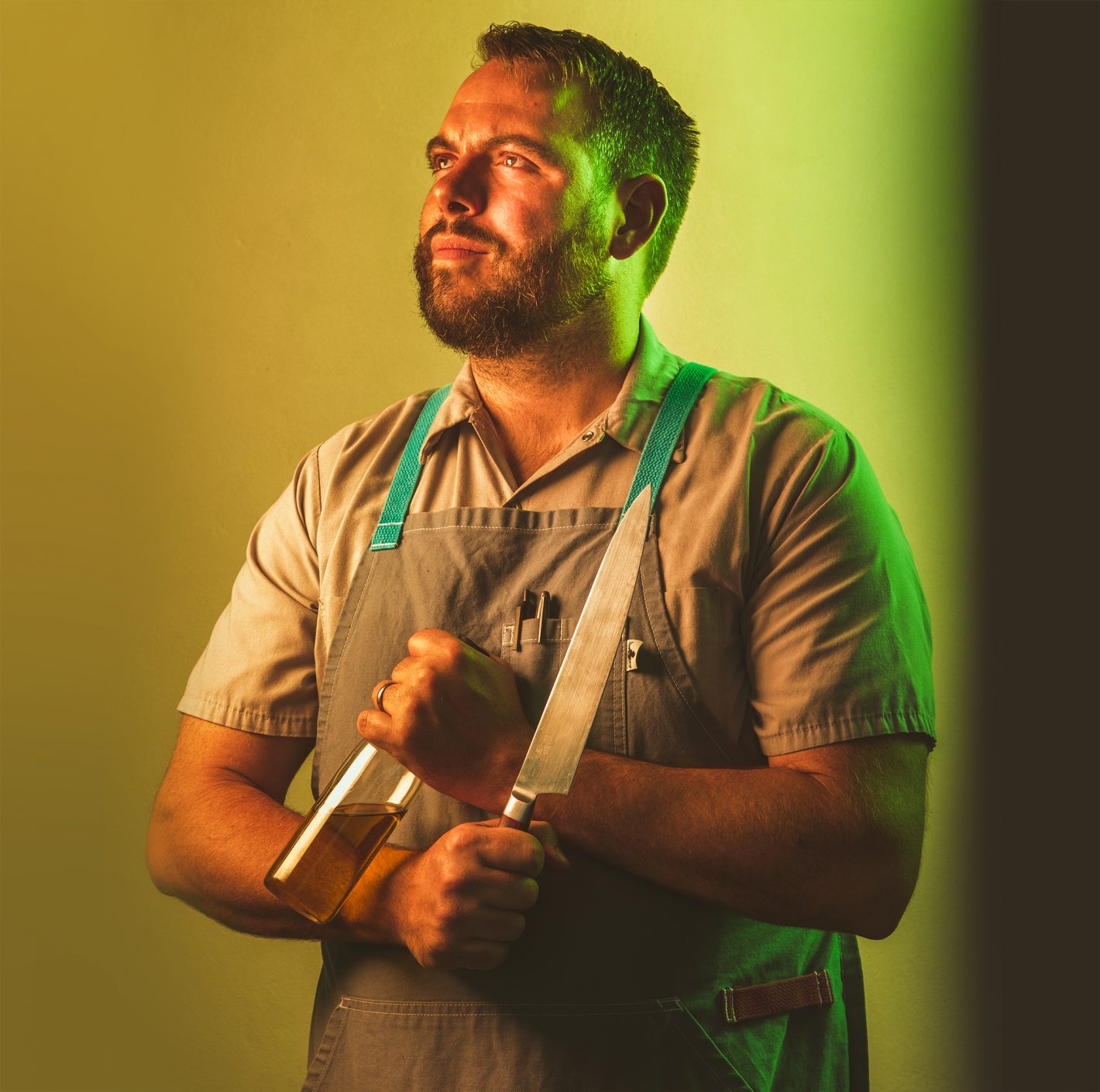 Canon, arguably the most talked about new restaurant in Sacramento, celebrates its one-year anniversary this week.

The philosophy of Canon is to use top quality, seasonal ingredients to create unique dishes and cocktails. Some late summer/early fall examples include confit tomatoes with smoked provolone and basil, and a pistachio-infused rye cocktail with peach and celery bitters.

The restaurant has stepped away from the trend of writing out where each cut of meat or each herb sprig originates—just take their word for it that it’s what you want.

Chef and co-owner Brad Cecchi dropped some big and potentially devastating news for Canon die-hards during our interview at the end of September—the most loved items on the dinner menu are being removed.

“It’s like shedding a skin,” Cecchi says, sipping ice water on the Canon patio. “I’m excited for the challenge. Our menu is not stagnant, our vegetable dishes rotate quite a bit, but there are things that have been on since we opened.”

Specifically, Cecchi is talking about their ribs, drumsticks and mole tots.

“I’m happy people have fallen in love with them, but we have more surprises up our sleeve,” he says. “And you’ll still be able to get them, just not at dinner. We’ve been on our first release, and now I’m anxious to go on to year two with a year two kind of feel. It’ll be our sophomore album.”

Cecchi sat with me during a busy time of new menu creation and Tower Bridge Dinner prep to share his experiences and creative process, his take on the last 20 years of fine dining in Sacramento and Canon’s long-term goals. 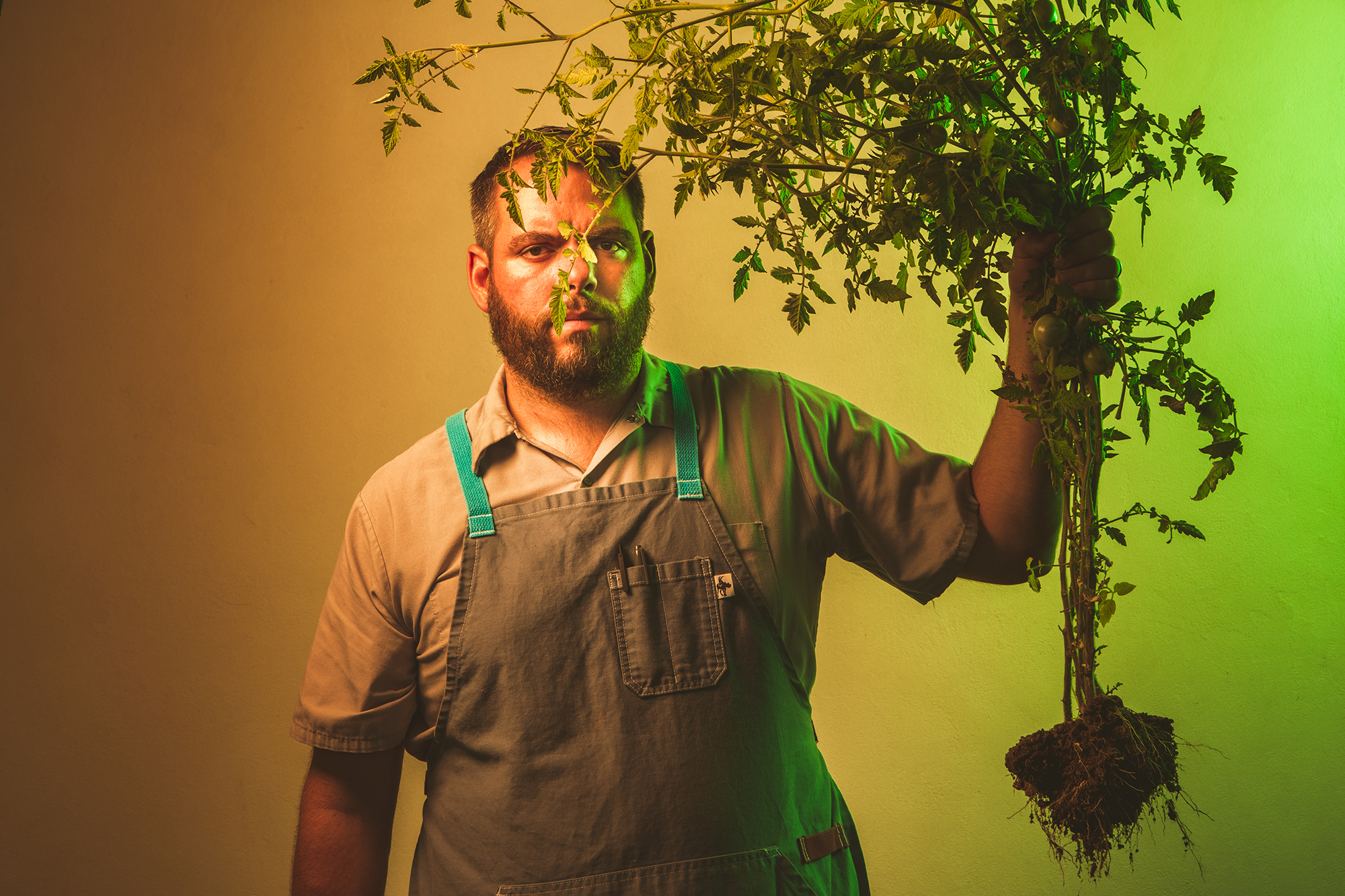 You come from a restaurant family. Did you work in restaurants as a kid?
My grandparents owned diners and restaurants but I didn’t work there. I was just the kid at the counter drinking milkshakes and eating hot dogs. When I was in high school they retired here and I would spend a lot of time with my grandpa in the kitchen. The food he cooked was not fine dining or avant garde by any means, but it was a good excuse for the family to get together.

You have lived and worked in other cities around the country, including Cleveland. Being from California, what was it like moving there? What was the food scene like?
I think there is a lot of California we take for granted. From a food perspective, we are used to walking into grocery stores and seeing all kinds of vegetables. That’s not always the way it is everywhere. I wouldn’t say we have a more healthy culture, but there is an awareness of different foods that may be considered healthy that are not readily available elsewhere. When I lived in Cleveland, you couldn’t walk into a grocery store and find quinoa. But here you can walk into a Safeway and buy quinoa. The food scene is different there. It’s richer, it’s beef and pork and chicken, and even the vegetarian is a little bit more rich. On the same side of it, there are restaurants there doing fine dining and they are doing it well. They don’t have the playground of ingredients we have so there is more manipulation of ingredients. Like in the winter, they don’t just get to let apples shine; they have to do stuff to them, especially if they are locally grown apples. And then there is the whole issue of winter. When we moved there, we had the polar vortex, and it was never above zero degrees day or night for two months. That brought a different kind of culture—people went to restaurants and bars as community gathering spaces. Ultimately though, I missed California and wanted to come back.

With your travels, and your experiences in wine country working at Michelin-starred Solbar, what did you take from it all to come up with your concept for Canon?
We have done a good job of achieving what we set out to do. I took what I learned from my travels, from an employee perspective to how to manage a restaurant, from a food-sourcing perspective, to incorporating the fine dining experiences I picked up from working in Cleveland and working for six years at the Citizen and then at Solbar. I wanted to take those quality checkpoints and institute them into what we were doing here.

At the same time I wanted to make the food, our beverage program, everything, accessible to everybody. And, yeah, that comes from price point. We are an inexpensive restaurant. We dial our portion sizes down so it doesn’t break the bank, and we try to be creative in how things get shared, and the sharing concept allows for more accessibility for the clientele and also makes for a more casual environment. It was really important that we bring good quality food with a focus on ingredient-driven dishes and ingredient-driven cocktails, and that we invite everybody as they are, from somebody coming in from the gym next door in their yoga pants to someone making this a destination for their birthday or anniversary.

What happens if Canon gets awarded a Michelin star or wins a James Beard award?
I think we would keep it the same. Obviously those are some of our goals and with that would come some sort of change in the way our business operates. We might get different clientele coming in or more clientele coming in so we make adjustments, whether that’s buy more china or hire more people. But I don’t think we would focus on all of a sudden requiring dress code or increasing prices. We would keep our intentions for how people eat here. You can come in and sit at the bar and order drumsticks and tater tots and spend $13, or you can order the lamb and sides with six people and spend a few hundred dollars. As long as you’re here to get those big flavors and well-made food, that’s our goal. We are happy for anybody to be here.

How do you think Sacramento has changed since your time working in other restaurants here?
Since my days at the Citizen, or even when I helped open Mulvaney’s, there were very few fine dining restaurants. At that point it was the Waterboy, Biba and Paragary’s. And the steakhouses were still doing a lot of business. Then 2006 to 2008, you had Mason’s open at that time, Ella was opening, and then Grange opened, and the scene started to get bigger but all of those restaurants were all kind of the same contemporary, Mediterranean, California cuisine, at the end of the day. Now what you see is different, lots of new restaurants opening and creative chefs like Patricio Wise at Nixtaco, Craig Takehara at Binchoyaki and Chris Barnum-Dann at Localis—they are doing different kinds of food. The main difference now is, whether it be young people or people who have lived here forever, palates are changing, too, and people are in for more exciting foodie experiences. Sacramento used to be the place you would go because you knew your favorite steak was on the menu and you knew your favorite bartender was working and you knew your favorite server was working and that’s why you went to those restaurants. Now, it’s almost like a punch card of restaurants: have you been to this place, have you tried this here, what are they going to do next?

So, we are going to change our whole menu and that’s a way to help ourselves evolve. Things that have been favorites of our clientele and have been on the menu for the last year are going to go away, because we want to develop that foodie culture and we want people to look at Canon as a place they can go to have a new, exciting experience every time.

I’ve heard you describe being a chef as being like an artist. When you come up with the new menu, what inspires you? How do you decide what gets on the plate?
I read a quote that said, “A chef is only as good as their pantry,” so my creative process starts with looking at ingredients and then looking at the other components of those ingredients, like preserving, whether it’s preserved lemons or canning tomatoes or fermenting vegetables, and creating a pantry of items. Then I start putting things into columns: how many vegan, gluten-free, chicken, lamb and seafood dishes I need. Then I can compartmentalize and see within those lines.

We are going to roll this new menu out at the end of October, but I’ve already created those lines for myself and now I’m trying to color inside of them.

You’re celebrating a successful one year this month. Have you had any bad days?
My wife and I had a baby the day before Canon opened. My daughter was born Oct. 9 and Canon opened its doors Oct. 10, so there have been hard times when I’ve needed to be here and present for the sake of the business and I’ve missed out on a little bit at home. But we opened this business to be able to provide for our families and create an environment where our families are welcome. Those are the hardest moments, missing out at home, because she’s a 1-year-old, so you miss something everyday. Even if you’re successful—successful restaurants are still hard businesses to run.

What was your most memorable moment this year at Canon?
When we were validated by Kate Washington in the four-star review in the Sacramento Bee, that was pretty memorable. We look at those kinds of benchmarks, and we were still pretty young at that time. We’ve been in other publications but to get four stars from her told us we were doing it right. What we told staff that day was this just allows us to keep striving for the goals we really want to achieve, including national awards. At the end of the day, why you strive for those national awards is because it allows your business to continue to be successful, and we want to have a place in Sacramento that’s in business for the next 20 years. Another restaurant that’s a canon among the great Sacramento restaurants, like Biba, Waterboy, Mulvaney’s, The Kitchen, all those places that have been open for 20-plus years. They’re doing something right to be open for that long and ultimately that’s our goal.

You grew up in this area. Where did you like to go and what did you like to do?
I grew up in Carmichael so I spent summers on the American River, floating or kayaking. And like with anyone living in their hometown, you end up being your best self there, whether you know the best way during traffic to get somewhere or the best hole-in-the-wall burger place or you know where to go on the Wednesday before Thanksgiving to see all your friends. I am my best self here. I like living downtown, and I like seeing people I know all the time. I think that’s what Sacramento needs to be. We have the proximity to the river, to the City and Tahoe, and I think the grid offers a level of accessibility that doesn’t exist in cities of comparable size. And I love the way the city has embraced the farm-to-fork label and its support for not just restaurants but the agricultural community. It’s a very kind of prideful city.

Where do you like to eat in town?
I eat at Binchoyaki as much as I can. He’s open late so sometimes I can run over there after I’m done here. And I’m a big proponent of Jimboy’s Tacos. Outside the region it’s not something you find.

Swing by Canon and sample their new menu. Canon is located at 1719 34th St., Sacramento. For more information, visit Canoneastsac.com.