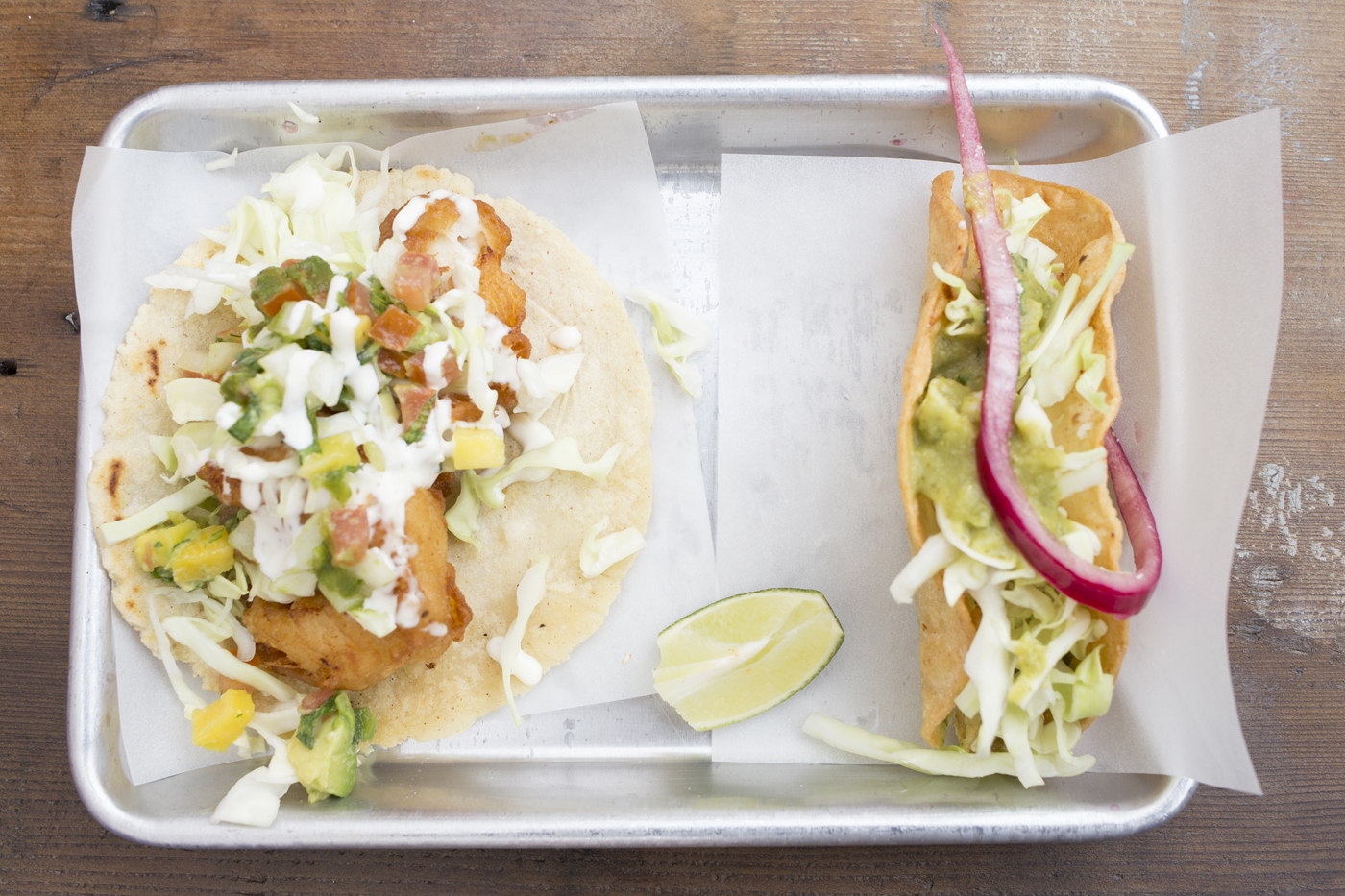 Midtown just got even better. The long-awaited Cantina Alley, located in Jazz Alley right behind Skool and the soon-to-come Flamingo House, has opened its beautiful wooden doors. Although they’ve done no marketing outside of social media and have yet to announce their grand opening, they are packed wall to wall each day with chill, happy patrons.

Opened by partners Max Archuleta and Art Aguilar, Cantina Alley is more than a restaurant. It instills a sentiment with an atmospheric experience that harkens vacation, relaxation and a slower pace of life. And it evokes memories of Mexico.

A mural by Shaun Burner and Miguel Perez, inspired by Mexican artist Jorge Gonzalez Camarena, sprawls on the outside wall of the cantina, which was a new construction from the ground up that took much longer than anticipated; the opening had been slated for November 2016. Their soft opening took place on March 16, and their upcoming grand opening block party will take place on Cinco de Mayo. For now, they’re opening at 3 p.m. to get their staff trained before it gets crazy, and soon they’ll be open for lunch, brunch, and have happy hour specials wherein, between 2 and 4 p.m., you’ll get a free botana, or little Mexican appetizer, when you buy a drink. The ingredients of the food are locally sourced, and the tortillas made fresh every day. Their chef, Angel Sienfuegos, seeks to reveal the variety of Mexican street food. 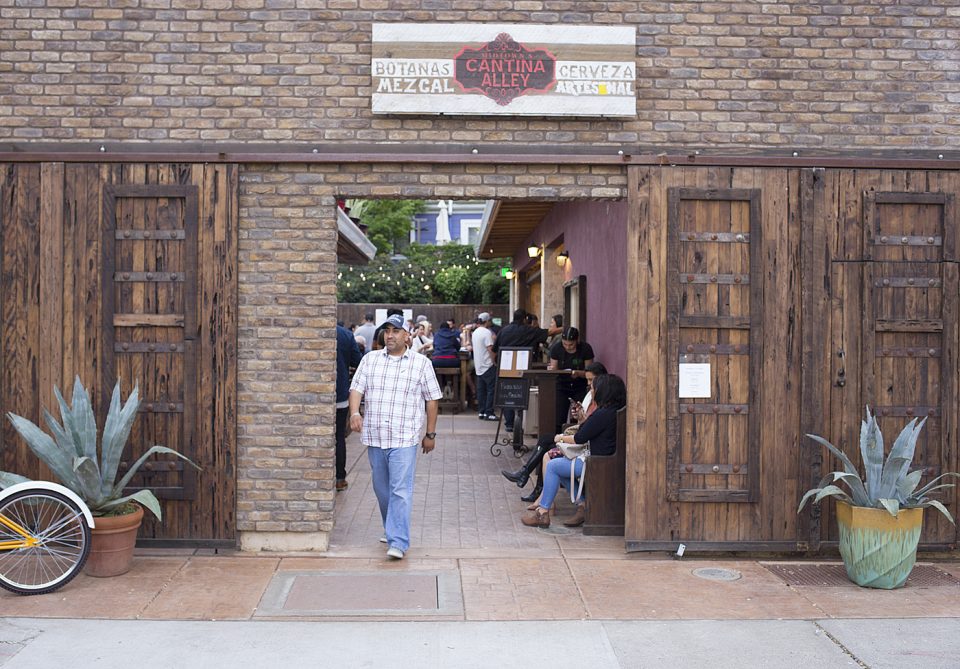 The beer scene in Mexico is experiencing a renaissance, too, as is true in the United States. Burgeoning craft brewers are creating a wide range of beer styles throughout Mexico, but it’s not easy to find these brews in the U.S. Cantina Alley is the only restaurant in Northern California that is offering as many Mexican craft beers as they do—in fact, they have to go through a Southern California distributor to get their hands on them. When I visited Cantina Alley, there were five different Mexican craft beers on draft: two IPAs, a Saison, a Stout and a Pilsner. They also have about 15 different Mexican bottled beers.

“That’s the fun part of the job, a little research and development,” smiles Archuleta. “We’ve gone to Mexico six or seven times in the last few years to do our homework. We found some great breweries down there.”

And their cocktail menu, again, showcases the range of what Mexican spirits have to offer. “It’s not just tequila in Mexico. 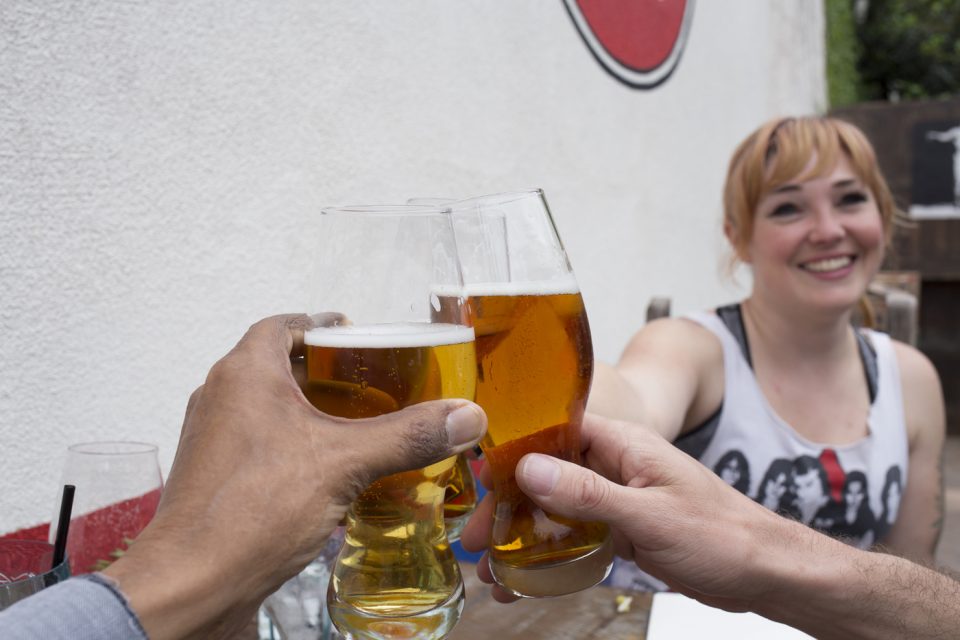 Mezcal has become really popular, too. We want to match our drinks with the different regional foods and marry them together. A new hire we have is Oscar Escobar, we brought him in from Mayahuel, and he’s one of the most well-versed people in the area on Mexican liquor. He’s expanded our drink menu.”

Explains Escobar, “I’m certified in tequilas, mezcales and distilled agave by the consul that regulates tequila in Mexico. I’ve been working in town for about 10 years creating successful drink programs. I worked for Celestin’s back in the day, and I worked at Azul which is where I really started getting creative. People were like, ‘Why are you putting chili in the drinks?’ and I was all, ‘Just let me do it!’ and right off the bat it became really popular. And I worked at Mayahuel for about six years. Here at Cantina Alley, there is a lot of passion, to showcase Mexico at its best.” Their cocktail program includes a hibiscus mezcal cocktail, and a margarita made with just 100% blue agave, fresh squeezed lime juice and agave nectar.

I ordered the taco arrachera with arrachera meat, onions, cilantro and a soy sauce marinade, and it arrived at our table briskly. The meat was tender, juicy and spicy, and the handmade flour tortilla was slightly crispy while retaining doughiness. The Baja fish taco with huachinango, a house white sauce, mango avocado salsa, and a jalapeno cilantro salsa was mouthwatering and wonderful. The red snapper was cooked to an outer crisp, and flavorful and juicy when you sink your teeth in. The jalapeno cilantro salsa gave it a pleasant kick. 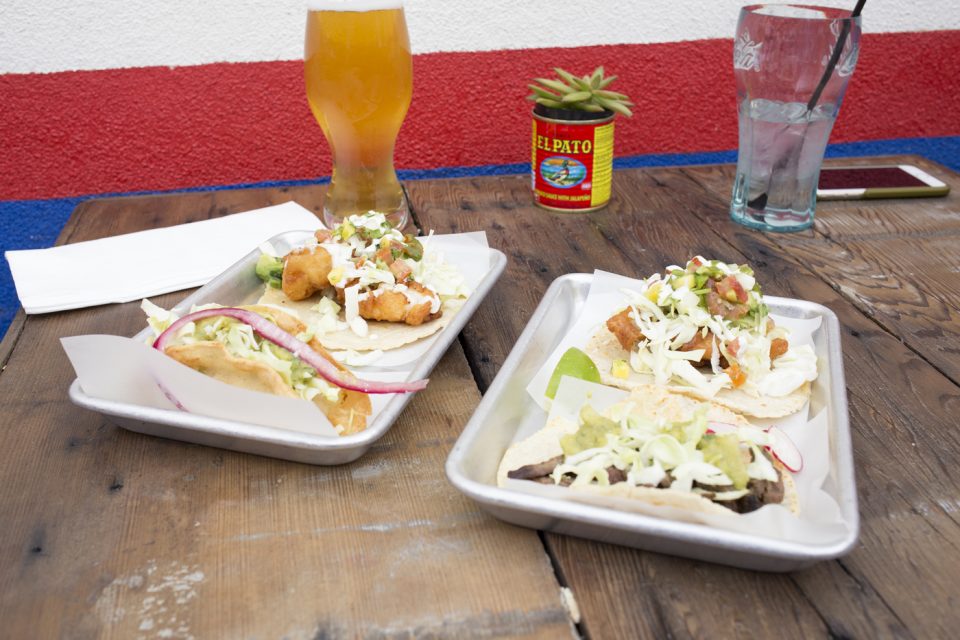 Our photographer, Evan, ordered the crispy papa taco with potato, cabbage and a green cantina salsa. This was not as good as the non-vegetarian menu options. The potatoes tasted as though they were simply boiled, and the only real flavor came from the salsa. Evan commented that something with beans and sauteed vegetables might be more flavorful and protein-rich. Another vegetarian offering at Cantina Alley is their elote, which is an ear of corn with mayo cream, cotija cheese and Mexican spices, and next time I go—and I most certainly will return many times—I’ll be ordering this for sure.

A hand-drawn chalkboard sign lists the rotating craft brews on draft. In the spirit of getting a good feel of slowed down patio life, we tried four out of the five available drafts. The Perro Del Mar IPA was a bit more malty than hoppy, rich and sweet. The Astillero IPA was effervescent, bright, hoppy and refreshing. The surprisingly well-executed Hann Zomer Saison was a contender with its Belgian counterparts, and the Sirena Pilsner was a crisp, fresh beer that would be perfect for sipping in the hot Sacramento summer sun.

In sum, the food was bomb, I mean, really, really good. But what really shines at Cantina Alley is that good patio sunshine. And the palpable passion that went into creating the experience, as well as the camaraderie amongst the management, the staff, and the patrons. It’s only going to get better. Archuleta discloses, “We want to work with the other businesses, Biergarten, Golden Bear, Flamingo House, possibly Tres Hermanas, to do some street closures, maybe a summer kick-off party.”

“We have a unique area here with a range of restaurants,” says Archuleta. “There’s a one-block area where you can find a variety of foods and entertainment.” Perfect for those summer evenings on foot, and celebrating the good life in Sacramento.

Cantina Alley is located at 2320 Jazz Alley in Sacramento. For hours and more info, check out Facebook.com/midtownscantinaalley