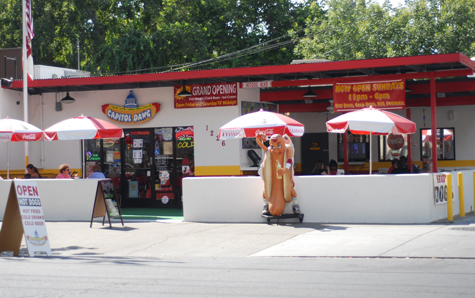 I know how hot dogs are made, but I forgot what I did yesterday, so I have no problem indulging in a true American favorite. Matter of fact, just thinking about the words “encased pork,” I envision a happy wiener dog wearing a chef’s hat. Me and hot dogs got no beef. Wow, that was lame. Let’s get to the food.

I’ve driven by Capitol Dawg (located at 1226 20th St.) numerous times, and the bright colors always catch my eye. While I do enjoy a good hot dog, it’s not something I crave or necessarily pursue. Of the last 100 dogs I’ve eaten, 85 of them have been after midnight and the only evidence I have of eating one is mustard and ketchup stains on my shoes. This also means that those 85 dogs have been from a cart, which if you read this column is a definite plus for me, and also that each dog was no more than $2.00 (peace to Scrappy Dog in Chico!). That being said, stepping into an official hot dog (sorry, I can’t do the “-awg”) joint was a little bit of a reality shock.

Let me start off though by honoring the décor. The autographed Tesla record stood out amongst traditional photos of you guessed it, hot dogs and hot dog stands, but without question the crown jewel was the full sized David Stieb autographed poster, fitted in vintage Blue Jays attire. There was a lot to look at, so in terms of decorations, they get the nod.

But yes, there was food and after staring at the menu for a good five minutes I decided to go for the obscure and ordered the Gold Rush Dawg. The Sacramento Dawg looked interesting (guacamole, sour cream, cheddar cheese and salsa), but Swiss cheese, crushed pineapple and teriyaki sauce sounded a little more appealing. At $4.29 it seemed a little bit pricey and as much as I wanted some fries and a drink (an extra $3), I couldn’t bring myself to paying almost $8 for a dog. The dog itself was pretty good, not too plump but still juicy and full of flavor. As a diehard pineapple fan, its pairing with the pork hot dog was nice. The added teriyaki provided a familiar flavor. My only complaint, aside from the price, was that the teriyaki made the bun soggy which for me is an ultimate no. On top of that, I left hungry”¦

To provide some variety, the homie Bocephus joined and opted for the Prop. 51 Dawg. In his own words, “In true Chicago fashion, the fixings are lavish on this bad boy. Your frank comes smothered in mustard, onions, tomatoes, sport peppers, celery salt, dill pickle and nuclear green relish (despite its appearance, the relish is free of any gene altering materials). As you can imagine, the Prop. 51 is big on flavor; but unfortunately, it’s also big on price. At $3.89 for the wiener or $6.99 with fries and a drink, this ain’t your late night hot dog cart.”

Aside from the above mentioned there are 23 other combinations, most of which are relatively tame with the condiments with varieties of mustard, cheese and onions. You can upgrade to a polish, hot link or brat for $1, and then over 33 extras to choose from ranging from .30 to .60 cents. The fries were good, and they offer beer!

The verdict: good food, a little pricey, but you won’t walk out swearing you’ll never come back.