A Brunch Worth Shelling Out For

Crawdads on the River

Crawdads on the River is one of three restaurants in Sacramento that literally floats on the Sacramento River, offering some of the best riverfront views you could ask for. The restaurant is located just off the Garden Highway, in the Riverbank Marina, nestled between a Chevys and some office buildings.

Established in 1986, the restaurant has been native to Sacramento for almost 30 years but is now under new ownership: Trevor Shults, who also owns Pour House and Vanguard 1415, and head chef Adam Pechal of Tuli Bistro and Restaurant Thir13en. Pechal became somewhat of a celebrity in Sacramento after being featured on ABC’s The Taste. The change in ownership resulted in a new menu and some significant remodeling. “Crawdads was pretty before, but we gave her quite the facelift,” says restaurant manager Brett Miller.

Sunday brunch at Crawdads was busy when I arrived just before noon, but it was an older crowd and the atmosphere was mellow. Tables were set up for couples, rather than groups of rowdy 20-somethings like many of the popular brunch spots in downtown or Midtown Sacramento. There was enough shade to make it bearable to sit outside despite the mid-July heat, and the sounds of chirping birds, the river and calypso music made it easy to forget that I was just minutes from the highway.

My server was pleasant and attentive, accommodating my request to switch to the other side of the restaurant for a better view and remembering that I had asked for lemon water with no ice. My meal arrived incredibly fast for a brunch spot, and the dishes were served piping hot. 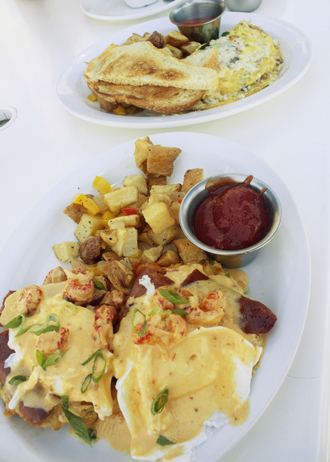 The menu is not huge, but there is a good variety of choices. I started with a healthier option—the Farmers Market Omelet, with spinach, mushrooms, roasted red peppers and aged goat cheese. Finding a decent vegetable dish at a restaurant that serves Southern food is usually a challenge, but this omelet was fresh and light, and the goat cheese complemented the vegetables well. The potatoes were fragrant and cooked to that perfect midway point between crispy and soggy.

Next, no brunch spot is complete without a signature benedict, and Crawdads does not disappoint in this area. The Cajun Benedict is served on a jalapeno-cheddar biscuit with Andouille sausage, eggs and the special “Crawfish Hollandaise.” This dish was surprisingly not too spicy, so it didn’t quite live up to its name, but it was easily my favorite dish. It was also the most expensive item on the menu at $18. 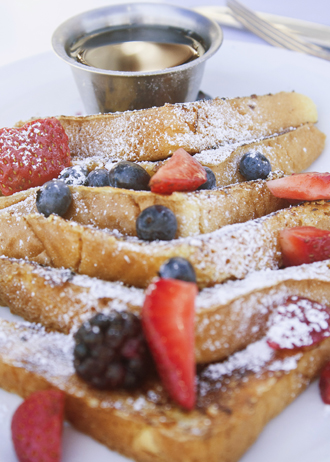 I happen to believe that dessert should be included with every meal, so the Crème Brulee French Toast was my final choice. Picture soft, creamy custard on the inside with that same characteristic burnt sugar crunch on the outside. It’s served with pomegranate syrup, but I don’t recommend using much—this dish is already a little on the sweet side and best shared between two people. 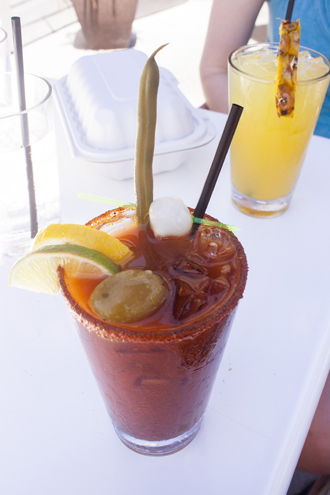 Finally, the cocktails. The selection was a bit overwhelming, although most would be better suited for a happy hour than brunch. As it was still before noon, I went with the “Crispy Mosa,” a refreshing twist on the traditional mimosa that pairs Crispin Cider with orange juice. This is a great option if you’re tired of champagne. I also tried the Cajun Bloody Mary, but abandoned my drink after a few sips because it was just too spicy.

Crawdads might not be my all-time favorite brunch spot in Sacramento, but the quality of the food combined with the riverfront view and relaxing ambiance certainly will make me a return customer.

Crawdads is located at 1375 Garden Highway in Sacramento and is open Sunday–Thursday from 11 a.m.–12 a.m. and Friday–Saturday from 11 a.m.–2 a.m. Visit Saccrawdads.com for more info.