I love a good ol’ dorky pun. So it’s no wonder The Cultured and The Cured, a newly opened meat- and cheese-centric market and deli in East Sacramento, brought a smile to my face with their cheesy tagline, “Livin’ on the Wedge.” A scan of their menu brought a rumble to my tummy—who doesn’t love tasting fancy meats, cheeses and other savory finger foods? Oh yeah. Vegans. Sorry, vegans, good luck with that soy cheese crap—I’m unapologetically stepping out to The Cultured and The Cured.

Upon entering the shop, I was promptly greeted by a friendly, pretty young woman named Hannah, who eagerly showed me the menu and answered all my questions. The husband and wife owners, Chef Andrew Hillman and Kelly Heath, were also hard at work on site, until Kelly departed to go to her nursing job at Dignity Health.

The Cultured and The Cured is a smallish space (844 square feet) at 3644 J Street that is bright, clean and inviting, with a back wall of rustic wood planks, prominent eat-in menu boards, a few tables, an engaging deli case presenting distinctive meats and cheeses, and a row of shelving containing beautiful displays of locally made, epicurean dry goods.

Although tempted by the gourmet sandwich, soup and salad offerings from the kitchen, I thought it best to get a gouda sense of the meat of what this place was all about, and after a couple of questions for Hannah, decided upon the mixed meats charcuterie board and the goat cheese board, which change frequently based on the varying inventory of the shop.

The mixed meats charcuterie board we ordered was a display of small portions of Fabrique Delices Pâté de Campagne with Black Pepper, Fra’ Mani Nostrano, Creminelli Milano, Molinari Finocchiona and Creminelli Mortadella amid smatterings of almonds, mustard and dressed microgreens. The goat cheese board showcased the Cypress Grove Bermuda Triangle, Capri Classic Blue, Achadinha Capricious and Cabricharme goat cheeses, all equidistantly spaced on the wood plank and interspersed with pistachios, mâche drizzled with vinaigrette, dried cranberries and marinated fava beans. Both were served with a basket of assorted organic artisan crackers by Potter’s Crackers, made locally in Sacramento, and also available for sale on the shelves of dry goods within The Cultured and The Cured. 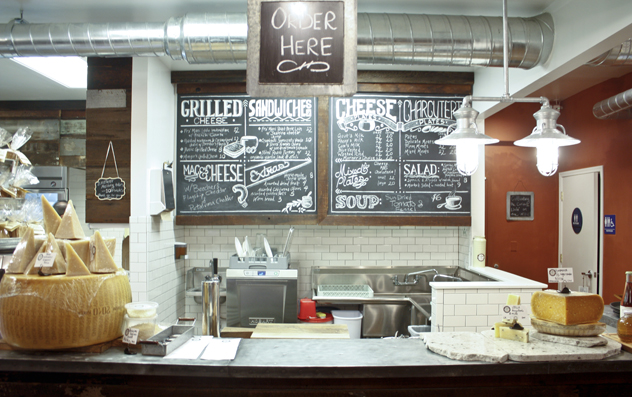 After sampling it all and trying to not draw attention to ourselves by suppressing the urge to moan at every bite, my favorite item of all was the Achadinha Capricious, a goat cheese made in Petaluma, with a rind that smelled like nasty feet and tasted like heaven. Chef Hillman informed us that a wheel of this cheese costs him about $560, and it dawned on me that it was truly a treat to enjoy samples of several such cheeses for only $12.

Also for sale on the shelves of The Cultured and The Cured is the entire line of Preservation and Co. products. Jason Poole, once a bartender at the Pour House, gained national recognition when Absolut Vodka declared his the Best Bloody Mary in California.

His handcrafted mix, coupled with his Sriracha Salt around the rim of the glass, were then in high demand by craft cocktail connoisseurs, and after partnering with Brad Peters, Preservation and Co. was born. You can find the Bloody Mary Mix, Hellfire Hot Sauce and the Sriracha Salt at The Cultured and The Cured, along with pickled items such as cayenne carrot sticks and balsamic beet slices. An array of other interesting and uncommon foods and beverages can be brought home from this East Sacramento meat and cheese shop to pair with your smorgasbord or elevated midnight snack.

“I have people that come in the store, walk over to the Preservation and Co. products, check out and walk right out the door,” says Hillman.

The bulk of their clientele purchases foods to take home rather than to dine in, although my guess is that once the shop secures their beer and wine license, more customers will be inclined to sit down with a glass of local wine and a cheese board as a decadent happy hour revelry. Bonn Lair bar flies across the street can also order cheese and charcuterie boards, which The Cultured and The Cured staff will deliver. 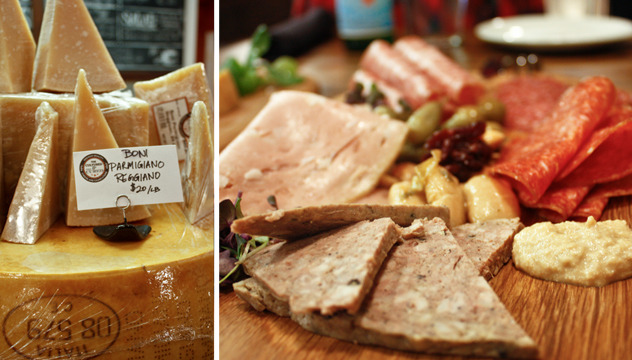 Hillman and Heath opened the doors in November 2013 with a locavore philosophy in mind. They source local products (or, at the very least, American-made) as much as possible. This ideology is even carried through in their shop’s décor, with reclaimed wood from Sonoma, Marin and Sacramento homes and barns, and earth tone paint formulated with goat’s milk from Pescadero. They focus on cheeses from the West Coast; only four cheeses are derived from Europe, and all meats in the case are domestic, although sometimes they will feature extra special imports if there is no comparable product created in our corner of the world.

Chef Hillman has been a member of Slow Food for 15 years, and has worked in restaurants for 30 years, having trained at the Culinary Institute of America in upstate New York—the same school where Anthony Bourdain and many other famous chefs earned their educations.

While the focus is decidedly to be a retail cheese and charcuterie store, Hillman and Heath recognize that unlike small European shops, they have to feature more items to catch a wider audience in America, where people normally shop at supermarkets rather than specialized stores, and they have to do more to capture the attention of their audience through events and partnerships.

“It’s an evolving animal that we have to figure out, that’s the hard part,” Hillman says.

They are planning to start holding cheese classes on Sunday evenings, and to participate in a major upcoming cheese convention at the Sacramento Convention Center.

“The ACS (American Cheese Society) is having their annual convention here in Sacramento at the end of July. It’s the first time it’s ever been out of the East Coast,” explains Hillman. As part of the festivities, they will be holding special events, and be featured on the ACS tour of local haunts to score hard-to-find cheeses. Additionally, they will be partnering up with Evan from Evan’s Kitchen to help with a cheese-focused wine dinner on Feb. 3.

Until then, brie a sport and make your whey to Sacramento’s latest fromagerie and sample the bounty of West Coast cheese and charcuterie.