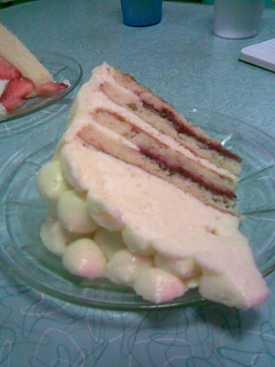 Imagine intertwining prongs of sleek, cool metal meeting in the middle of desire and decadence. Cutting the tension and fluff of frills and frosting with the blunt edges of reality, striking a hopeful counterbalance of possibility and reality. Sharing dessert with someone can subconsciously be this intense and stimulating. It’s really about what you’re eating, with whom you’re choosing to eat and how much you’re investing in the experience.

As much as any respectable foodie enjoys food, enjoying it with someone you care about makes the experience much more fulfilling. Regardless of the dreaded VD (Valentine’s Day, silly), this is just as good as any other time to share and build relationships with the important people in your life.

Grabbing dessert ÃƒÂ  deux could be the starting point for sensual satiation, or just the right light ambiance for cheerful conversation with the right mÃƒÂ©lange of pals. Either way, Rick’s Dessert Diner is not only a local favorite for traditional desserts, but also a good place to dessert ÃƒÂ  deux.

Upon my visit, I was looking for the sexiest and most sumptuous sweets. If I had my way, I would have ventured to this veritable sweet factory with a special someone (wouldn’t you like to know who?) I was sweet on. But, life is life and instead I recruited an amicable volunteer to partake in just desserts. A homie, if you will.

After hours of work, we were looking forward to our sweet treat. Isn’t the idea of Rick’s “more than 285″ homemade delectable desserts absolutely overwhelming? Since the possibility of “too much of a good thing” does exist, Rick’s offers the choice of about 40 different desserts upon any given visit. Keeping the approaching Valentine’s Day in mind, we chose the sexiest and best-partitioned pastries. We chose cakes we thought would leave those who dessert ÃƒÂ  deux satisfied, intrigued and in anticipation, but not bloated or afflicted with bad breath. 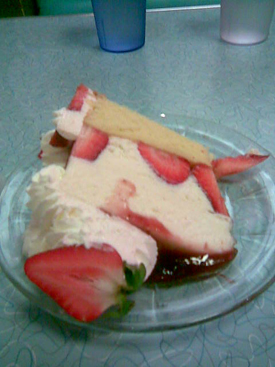 We decided on a confectionary trifecta for $5.95 each: a slice of the white chocolate champagne cake, the strawberry bagatelle, and a smooth slice of the midnight torte as the topper.

Our sampling began with some disappointment. The white chocolate champagne cake scintillated my senses with four layers of yellow cake separated by raspberry preserves and butter cream. The humongous butter cream topping was like puff drops of cashmere cream-colored clouds dusted with sparkling sugar shavings. But the cake was too dry and frosting too buttery. The “champagne extract,” used to dazzle dessert choosers, had little notable flavor and set false expectations. The concept was creative, but the execution was not exceptional.

The strawberry bagatelle cake was the ultimate winner in my book. I thought it would be the average cake, but it was delightful and great to share. The big strawberries presented the perfect sharing test: splitting the fruit evenly. The 5/8 frosting to 3/8 spongy cake ratio worked well with highly orange-flavored, Grand Marnier-spiked creamy mousse topping.

As my homie excitedly told me about his budding relationship with a young vixen, we turned our attention to the flourless, chocolate-y midnight torte. Basically just chocolate, there was no way that this dessert wasn’t super sexy-time. Be sure to take the complimentary raspberry sauce, because the tartness of the puree is a necessary equalizer for the intense torte. 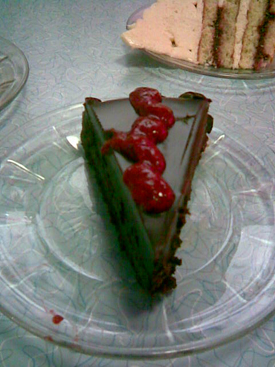 We managed to finish at least half of each slice of cake. Our eyes were bigger than our tums and I left feeling un-sexy. Moderation and sharing is key. One piece is perfect for two.

Sharing dessert can be as innocent as a sugar binge between buds. But it can be as intimately indulgent as the premise for a romantic romp between longing lovers. Let’s do it and go get some”¦ Dessert ÃƒÂ  deux, I mean.