“I can’t really keep up with much but my beer. I don’t really care about press and that sort of stuff. I just brew and it kind of consumes me whole,” he says.

With one sip of his beer, you’ll understand exactly why he doesn’t have to.

Tuesdays are brew days at Device. Anthony spoke to me while he plugged and unplugged hoses, checked brew temperatures with enormous thermometers and busily paced back and forth in front of his brew kettles and fermentation tanks. He has been doing this same thing at his Power Inn brewery since at least 5 a.m., and has that brewer’s beard Sacramento is starting to become familiar with.

“I may or may not have paced through here sobbing a time or two,” he jokes, “It’s a tough job, believe it or not. There is a beautifully industrial nature to it.”

This wasn’t always how Anthony spent his days. A little over two years ago, he threw in the towel as a structural engineer, where his work left him underappreciated and under stimulated. Within a short time frame, he and his wife Melissa moved from San Diego to Sacramento, welcomed a son as well as pursued a new business venture: Device Brewing.

Anthony’s brewing background comes from little more than home brewing experience and a mature beer palate that he credits his father for imprinting in him from a young age. His Friday rituals growing up would be to eat pizza with his pops and have a few swigs of Anchor Steam. Anthony fondly remembers the moment when he was able to tell the enormous difference between craft beer and mass-produced beers like Budweiser.

Now, Anthony is his own boss in a business “that’s 95 percent hard labor and cleaning,” he says.

He barely keeps up with the demand for his beer.

When the taproom is open, it is always packed. Kegs are constantly blowing, and all beer brewed is consumed not long after. It seems that folks know where to fill their cups with the proper suds.

“We are only open a very limited number of hours a week,” Anthony says, “and we just get massively slammed every hour we are open. It’s awesome.”

Device Brewing is one of the first nano-breweries in our area. A nano-brewery being a small space with more limited brewing capabilities. Four-barrel kettles of beer are artisanally crafted about every two weeks. Currently, Device is looking into getting seven-barrel fermenters so they can double their production within the next year. This is an operation that will likely require the brewer to work 18-hour-long days.

There are a standard six beers usually on tap with a few rotating specialty beers such as a Track 7 collaboration and a black IPA. “What makes brewing tricky,” says Anthony, “is finding a constant in brewing and keeping a great beer true.

“Yeast strands are constantly changing and the art lies in being able to detect them and craft the beer as so.”

Sacramento’s beer scene is seemingly growing exponentially, but Device Brewing Company is making its way to the top of grain rightfully beside Track 7, Berryessa and Knee Deep brewing. Brewing beer is complicated. Yes, it’s delicious and fun to drink, but brewing craft beer is truly a labor of love. Brewing beer is expensive, it is physically strenuous, scientific at times and infiltrated with complicated aspects of business and legalities…all things that brewers like Anthony have become well acquainted with. However, Anthony is one of the local brewers who is managing to keep it small, off the grid, high in quality and extremely successful.

“I think that the Sacramento beer scene is something to be proud of,” says Anthony. “It’s not nearly up there with places like San Diego or Portland, but in a short amount of time, we have come a crazy long way.”

Ken Anthony will be a prominent fixture in this year’s Sacramento Beer Week, with Device kegs making an appearance at the Sacramento Brewers Showcase at the California Auto Museum on Feb. 27, 2014 and Kupros Bistro on March 1, 2014 among other locations. For a full rundown on where to find Device Brewing Company, go to Devicebrewing.com. For more about Sacramento Beer Week, go to Sacramentobeerweek.com.

Now that you know the story behind Device Brewing Company, the question remains: How’s the beer? Here’s a rundown of Anthony’s impressive array of brews.

The first beer in the lineup was the Derby Gurl American Amber, coming in at 5.2 percent ABV. Derby Gurl filled the glass with a true amber coloring and a thin lace of white head. While most Ambers tend to fall short on aroma and taste, Derby Gurl was bursting with caramel and roasted malt aroma. The first sip awoke the palate with a mild bitterness, and finished with a touch of caramel. The light body of this beer makes it especially easy to drink.

The second beer in Device’s arsenal was the Whisper Sweet Nothings, Sweet Stout at 5.5 percent ABV. Although the name is a bit of a mouthful, the flavors did not disappoint. The beer was a beautiful midnight black with a dense toffee colored head. Coffee and bittersweet chocolate rose from the glass giving off a luring aroma. A smooth and creamy body gives way to layers of semi-sweet chocolate and a slight roast. The sweetness of this beer comes into play on the initial sip, and is caused by residual sugars left behind by the yeast.

The Integral IPA was our natural progression through the beers. Device’s Double IPA holds an alcohol content of 7 percent, and is brewed in the West Coast style using massive amounts of hops. When set on the counter, the liquid in the glass was a hazy, tangerine hue, with a creamy white head. Enormous tropical fruit scents, with dank and resinous undertones came from this beer. Staying true to the West Coast style, the flavors were dominated by citrus fruit and a touch of bread-y grain flavor on the finish.

Nearing the end of our tasting tour, we stepped into the abyss with the Russian Imperial Stout. This 9.5 percent ABV beer hides its alcohol incredibly well by masking it with chocolate and dark roasted coffee. This beer really changed into something incredible as it rose a few degrees in temperature. As it warmed, the aroma opened to a bouquet of fresh ground coffee and a spiciness of tobacco. Being a Russian Imperial Stout, this beer was definitely driven by hops leaving a sticky bitterness on the tongue.

Saving the biggest and probably most popular Device beer for last, we found ourselves staring down the 10.5 percent ABV Basilica Triple IPA with Mosaic hops. This hazy, orange brew had an incredibly potent hop aroma that could be smelled from several feet away. Unlike the Double IPA, which had more citrus notes, the Basilica was driven by tropical fruits, lending a sweeter aroma. Overripe stone fruits such as peaches and nectarines were some of the flavors that came to mind, along with a sweet malt backbone that balanced the aggressive hops. Basilica is a remarkably smooth beer that drinks like something with half of the alcohol content. 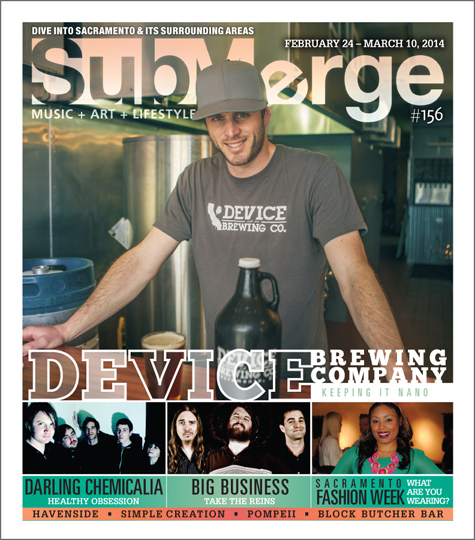