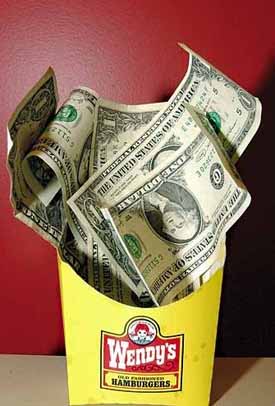 Over the past two years I have, for the most part, cut fast food out of my life. I don’t know if it’s a coming of age thing or realizing that cooking is fun and often times more economically the way to go, but for the most part I don’t miss fast food. I get the cravings, though, and when they come on, they hit hard. It’s like I’ll wake up, and my body will tell me that I need a gordita and my mission for that day will be to get a gordita. I didn’t wake up today with that craving, but for this installment of Refined Tastes, I will contradict that claim and discuss the coveted dollar menus. I’m broke, and it seems fitting.

In my opinion, the best dollar menu item has to be Jack in the Box’s two-taco deal. I know it seems a little sacrilegious to dub a taco the ruler in a hamburger nation, but for years these questionable pockets of fried stuff have held me down. It’s never really been clear what the meat it is, but it’s masked by something that’s sharp to the tongue so it gets a pass. In fact, when at Jack in the Box, I approach the dollar menu strategically. After some tacos drenched in additional hot sauce, a chicken sandwich makes for a nice palette cleanser, leaving the taste buds with a nice gluttonous mayonnaise flavor. Basically, every time I walk into Jack in the Box, I come in with exact change. $2.12, out the door with a full and balanced lunch (in terms of low grade meats). Their fries are arguably the best, and the dollar portion is proper, and before the Jumbo Jack graduated to the regular menu, they made an awesome combination. If a letter grade had to be given, they’d get a B+

I can’t front though. In terms of tacos, Taco Bell trumps Jack, but when going cheap, quantity plays a major factor. However, Taco Bell recently stepped up their dollar menu game a couple notches, launching the .79, 89 and .99-cent menu. In terms of dollar options, Taco Bell has got the game in a stranglehold. It’s basically the same five ingredients, but they dress them up well. I’m a fan of the newly introduced, and .89-cent, volcano taco, although the red shell is a little suspect. I’m not mad at .79-cent triple layer nachos, and I’ll go to town on some .89-cent soft tacos. As ridiculous as it sounds, the .99-cent menu is almost off limits with so many great and cheap options. Letter grade: a strong B.

I’m not a McDonald’s fan, but I have been known to wreck their Wednesday/Sunday hamburger or cheeseburger specials. I guess McDonald’s dollar menu turns me off on the strength of the parfait. It seems so out of place, and almost comical to me. The McChicken is decent and the apple pies get props, but I don’t go to McDonalds because of their dollar menu. Overall grade: C+

Wendy’s is the sleeper dollar menu. They’ve got quality items, from a Frosty and junior bacon cheeseburger, down to the five-piece chicken nuggets. It’s not the most extensive, but what they offer for cheap they do it well. Despite what BK might try to plant in your head, I’m a big fan of the sour cream and chive baked potato, and while never an urge, the chili gets a pass too. Dave, you’ve got the right formula and earned yourself a comfy A.

At first I was quick to crown Burger King, thinking back to summer of ’97 when a van full of stoned teenagers would combine to eat 15 Big Kings, but in hindsight BK is not the King. In fact, their dollar menu is pretty wack, and I’m ashamed to have even held the idea that it was on point. The chicken nuggets are bomb, but the hamburger is pretty lack luster. I mean, it has the word “regular” in it, so that shows that there is not much going on. Bring back the Big King, and we can talk, but until you step up your game, BK shall reside somewhere in the B/C range.