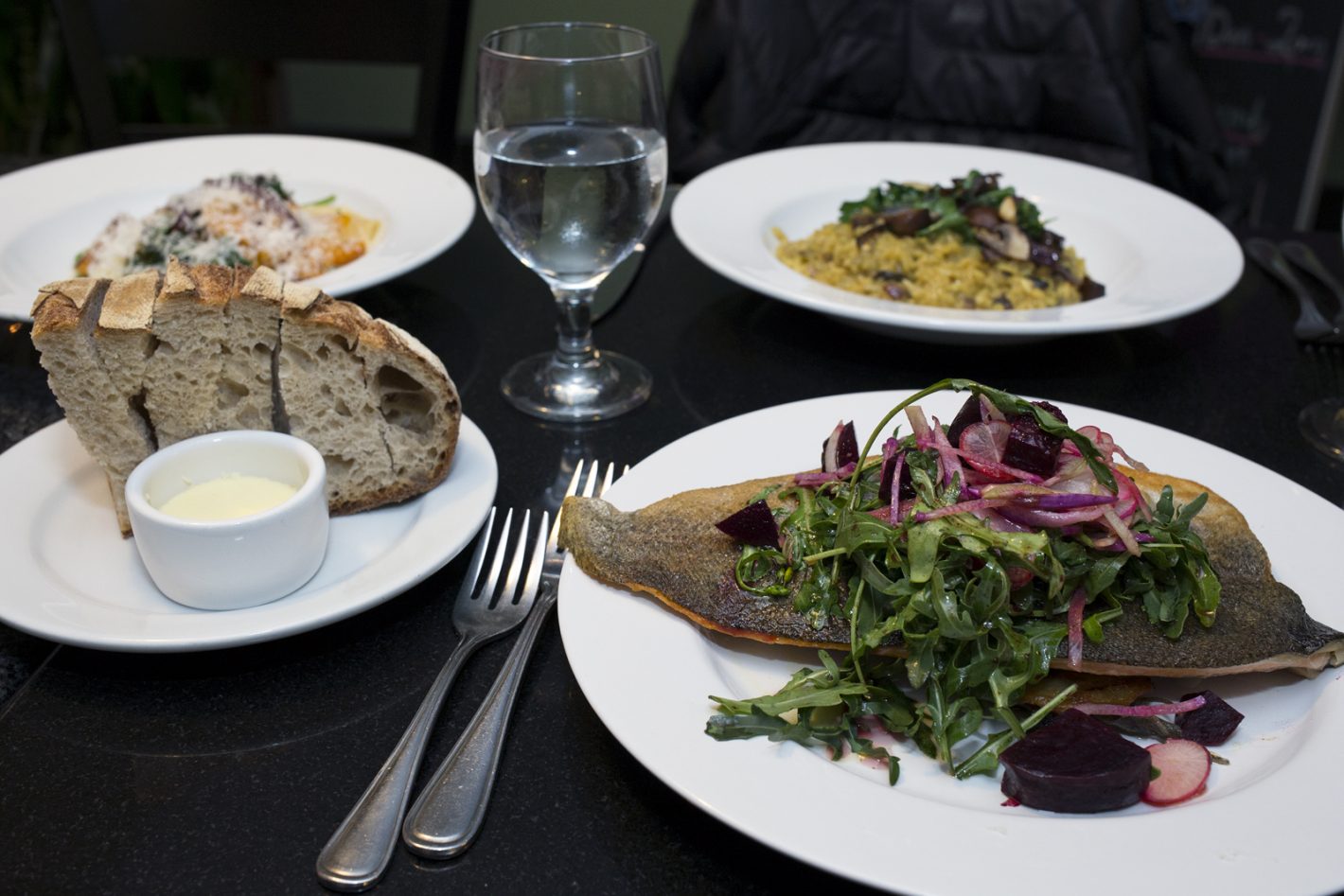 We all know that the heavy use of pesticides in our produce, which also sneaks its way into the processed foods we eat, can cause a host of health problems, including cancer. While some religiously steer clear of genetically modified organisms (GMOs) and non-organic food, and find it hard to eat out without questioning what insidious chemicals they might be ingesting, most of us don’t have time to stand in grocery store aisles thoroughly perusing every nutrition label, and thoughtlessly toss whatevs into the cart.

EASTsmf, a year-old restaurant on J and 32nd streets in East Sacramento, offers a well-executed, ever-changing menu—but they also offer a relaxing dining experience, paired with peace of mind. All of the food and drink served in this comfortable, casual space is organic and non-GMO. Additionally, most ingredients are sourced locally. Whether you’re a meat eater or vegan, all are welcome.

Owned and operated by husband and wife team Rhonda and Tony Gruska, EASTsmf is the couple’s second organic restaurant endeavor. Monticello was located in Davis, a town that is known for its food conscientiousness, albeit while also housing notorious GMO-purveyors Monsanto. After a four-year tenure, they shuttered Monticello in mid-2015, but Rhonda and Tony didn’t give up, and learned from the experience. “Most people are aware that restaurants are a tough business, but that situation was pretty much untenable from the start for a number of reasons. It was such a beautiful space, but our investment was misplaced,” said Rhonda of Monticello’s closure. 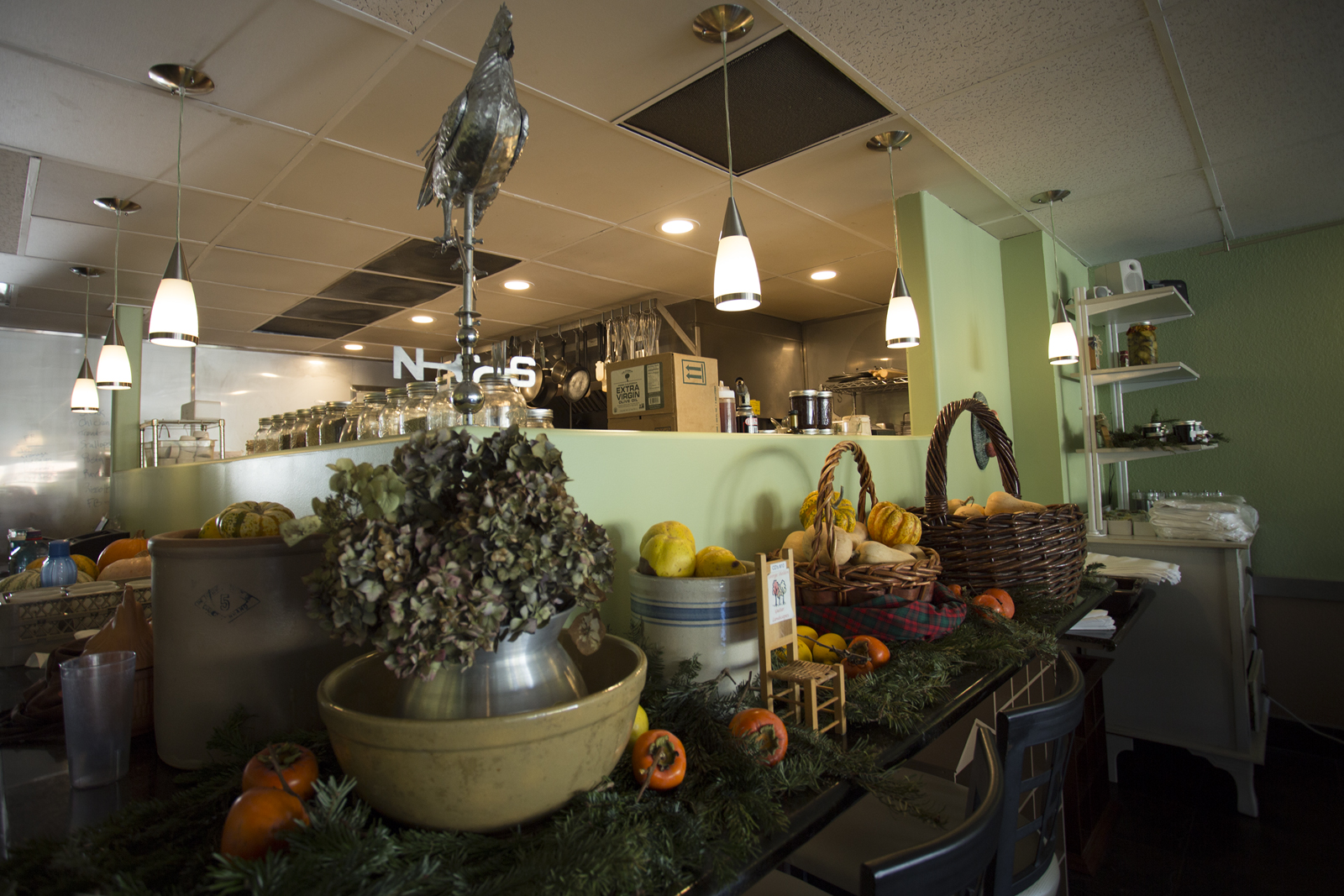 The lessons, besides downsizing their brick and mortar, included getting in where you fit in, and being in Sacramento, a hotbed for slow food, was the way to go. Beams Rhonda, “We love it here.”

Tony gained an appetite for cooking as a child, inspired by his Polish grandfather. “There were crocks of sauerkraut fermenting in the basement and freshly ground horseradish and beets in the refrigerator. On weekends, he took me along to visit the local butcher and we’d always stop by the bakery for Polish cheesecake. The first full meal I cooked on my own was at age eight. I was cooking regularly from that point on, and it’s no surprise to me that I ended up in this profession, as cooking and food have such a strong association with my beloved grandfather.” 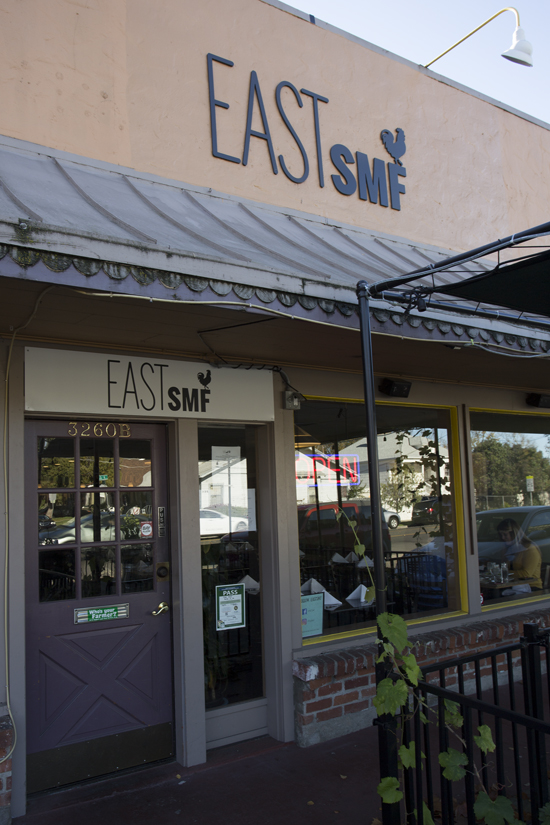 Also a foodie at heart, Rhonda met Tony in college working at the Segundo dining hall at UC Davis. “Tony was back of the house and I was front of the house. We’ve pretty much had that same dynamic going on ever since. After college, I went into politics, while Tony started a catering business. It was the perfect combination. My job involved a lot of event planning and fundraising and Tony handled making sure we always had great food,” recounts Rhonda.

Although EASTsmf is by no means preachy, it is a dining establishment that is rooted in food politics and a philosophy of health and quality. “We don’t want to serve our customers anything we wouldn’t eat. That’s why organic is so important to us, and if it’s not organic, we make sure it’s non-GMO. Genetically engineered ingredients are really insidious because, unlike other developed countries in the world, we have no labeling laws. Americans are eating GMOs in the form of oils, margarines, sugars derived from sugar beets or corn, and a myriad of fillers and emulsifiers. It’s a lot of work figuring out what’s safe to eat in the U.S. because our food system is controlled by the same people who profit from it,” explains Rhonda. “Local, seasonal organic vegetables make up such a large part of our menu, so our farmers bringing in something new means the menu is going to change. Tony’s inspiration for a new dish is driven by what our farmers have that particular week.” 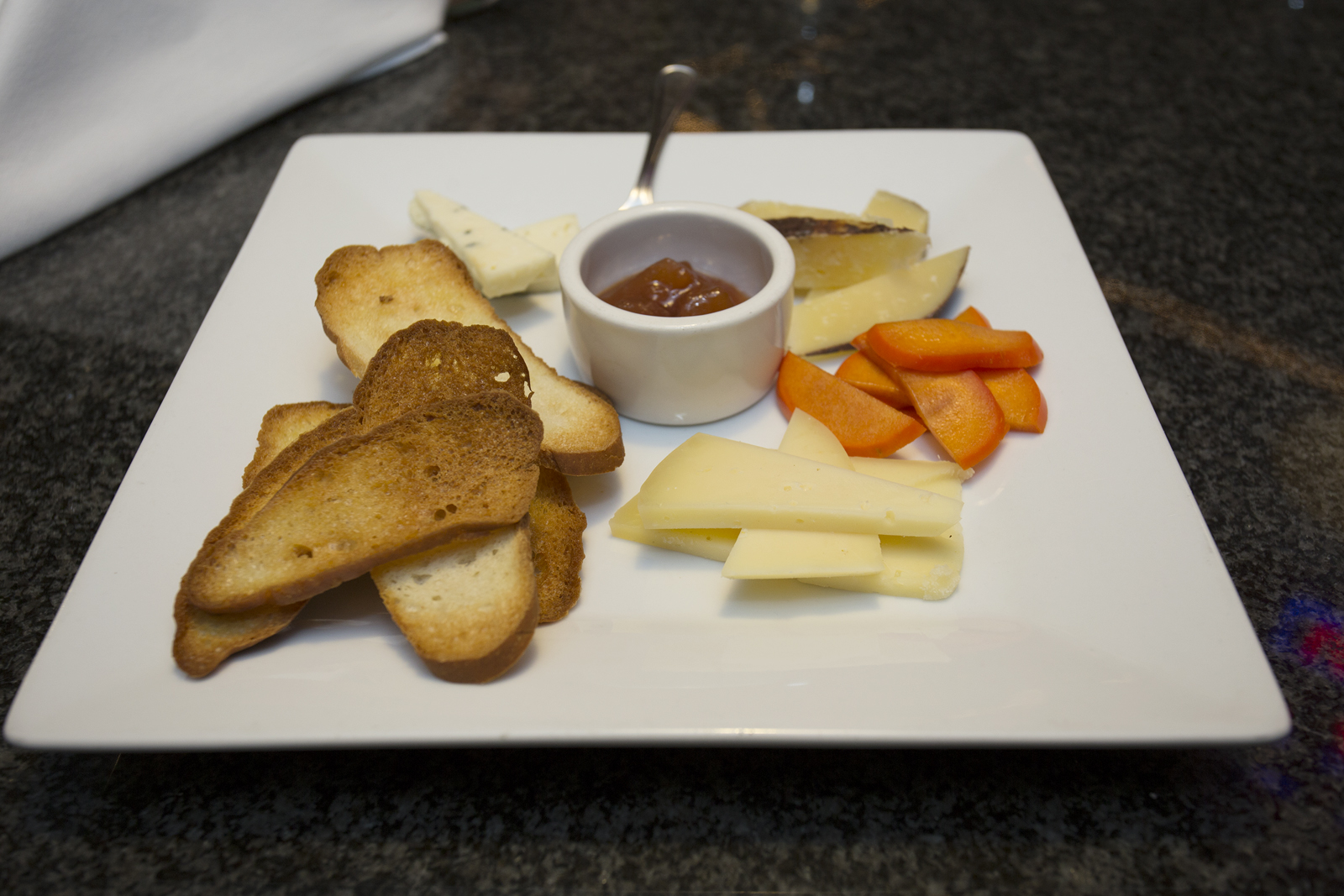 Photographer Evan Duran and I visited EASTsmf for dinner, and after passing through its outdoor patio, we entered into a simply decorated, tranquil space. Louis Armstrong’s crooning, slow swing set the mood. Curated art and photography don the mint green walls and a small, open kitchen in the corner is wrapped with a counter upon which rest a cornucopia of flowers and gourds. A rooster statue sits atop and the restaurant has a very Petaluma feel. 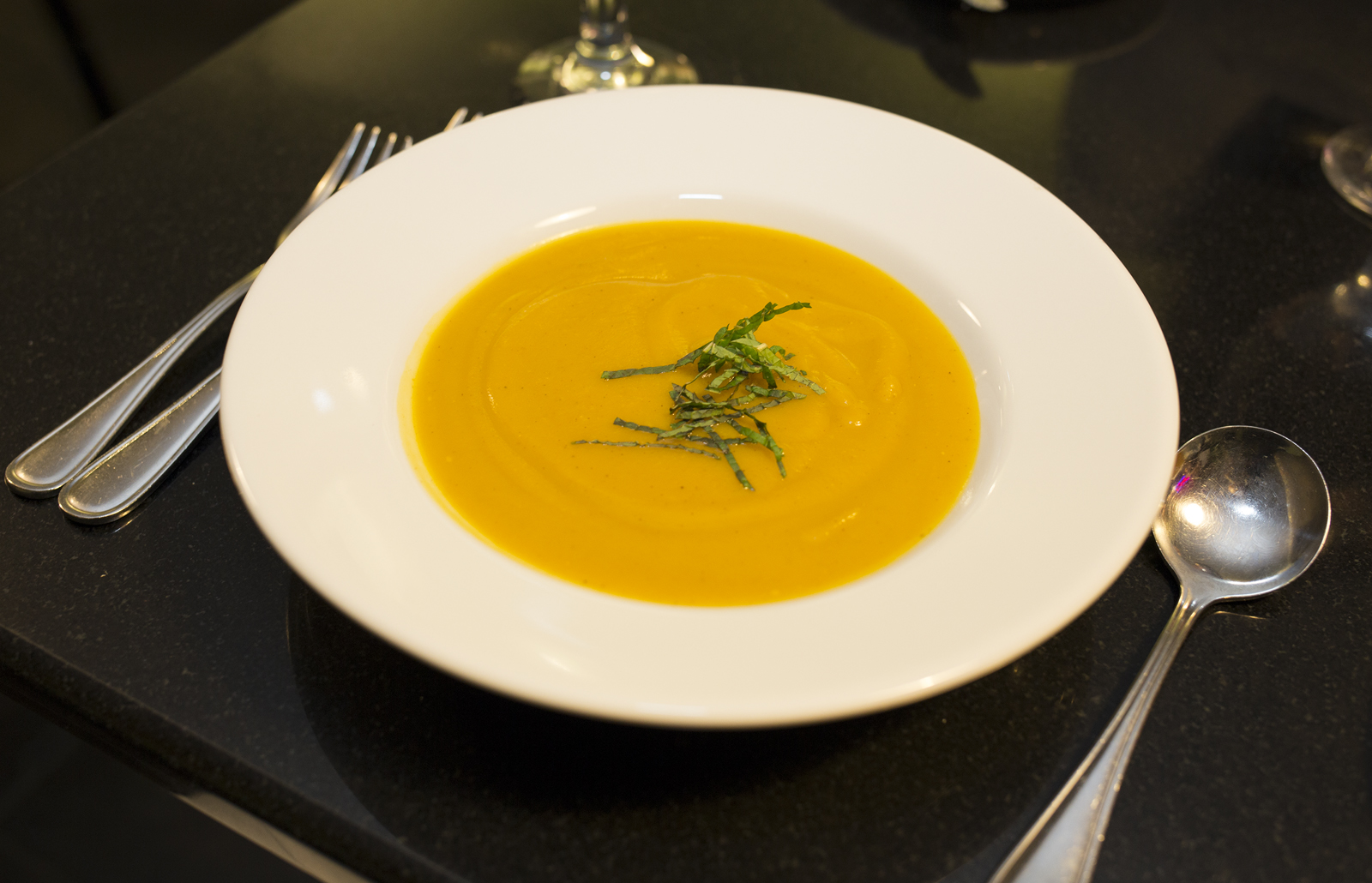 The menu is categorized into starters and mains, and even the beer and wine are organic. The soup of the day is always vegan and gluten-free. After some deliberation, we ordered the vegan wild mushroom risotto, the butternut squash soup, the cheese plate, the pan-roasted trout and the fresh pasta. 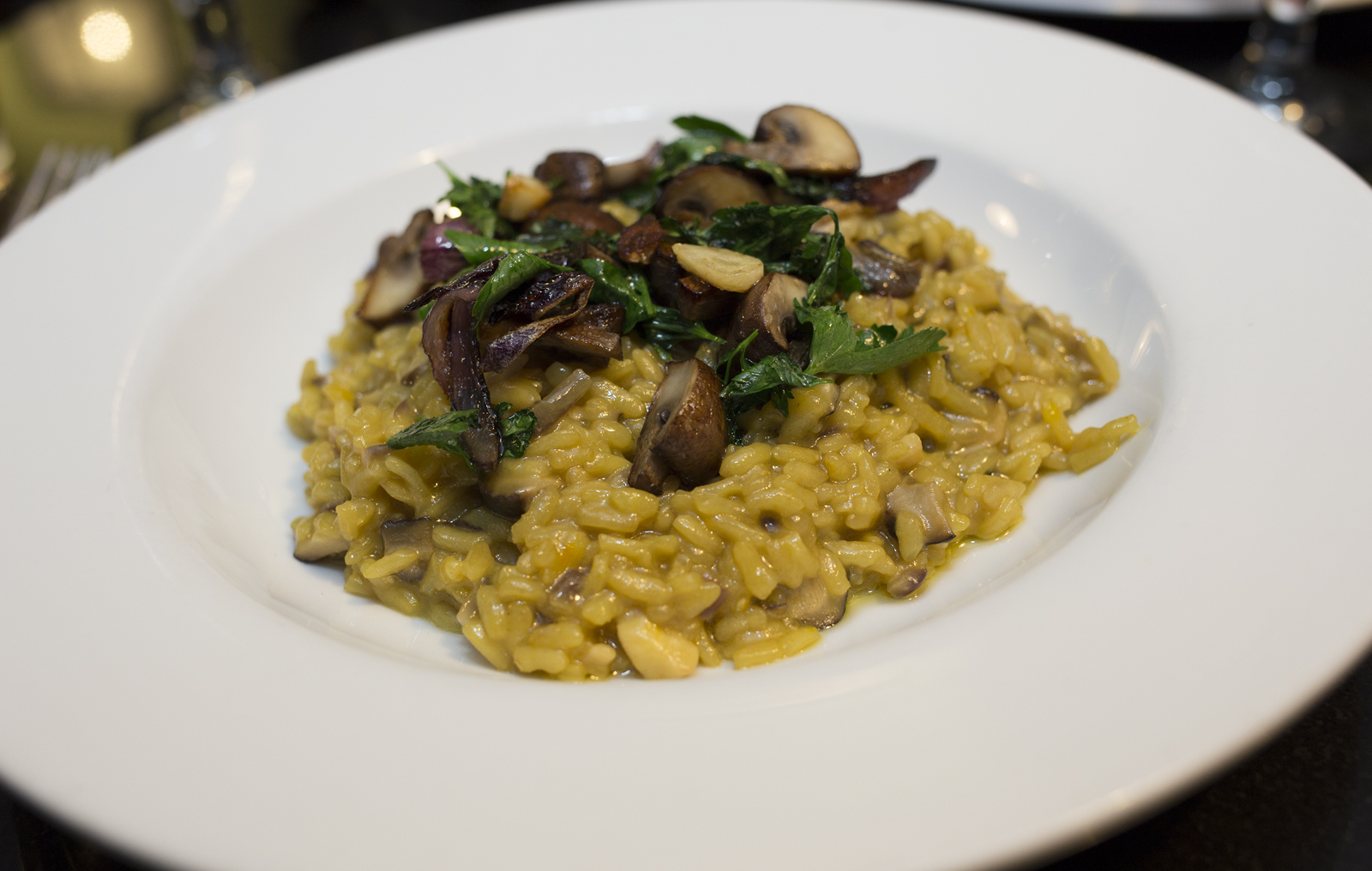 When the mains arrived, Evan remarked, “This is the best risotto I’ve ever had.” The wild mushroom risotto was loaded with rich saffron, delicious wild mushrooms, caramelized onions, and roasted garlic and topped with fresh parsley. 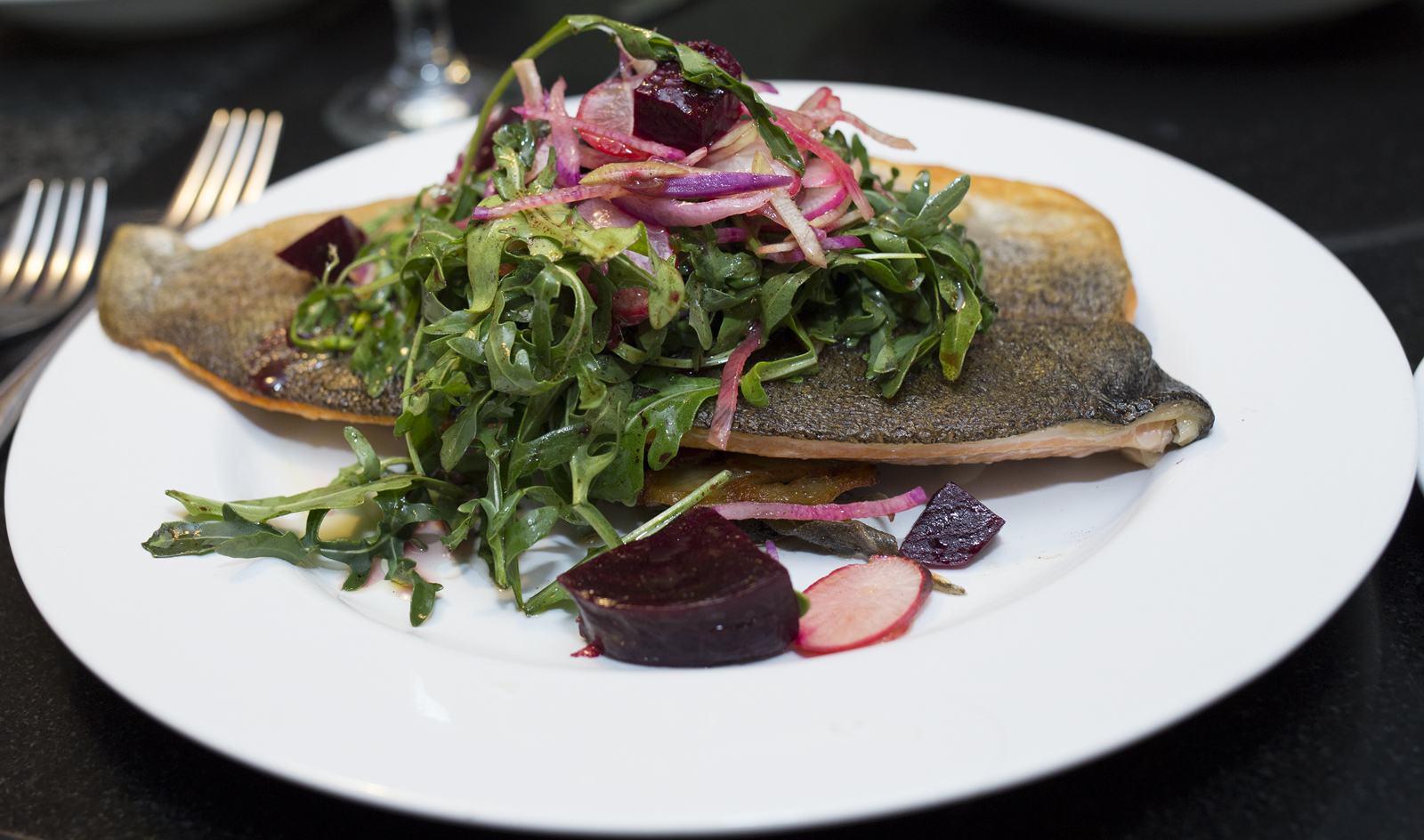 Similarly, I found the pan-roasted trout to be the most beautifully plated and perfectly executed fish dish I’d ever sunk my eager teeth into. Undeniably fresh as a daisy, the trout was seared, crispy skin-on and laid on a bed of roasted potatoes and arugula with a blanket of roasted red beets and thinly sliced radishes.

But best of all was the fresh pasta. On this day, it was a pappardelle dish with chunks of roasted butternut, sautéed farm greens, sage brown butter, caramelized onions and parmesan. It was savory, creamy, buttery, al dente and unforgettable. 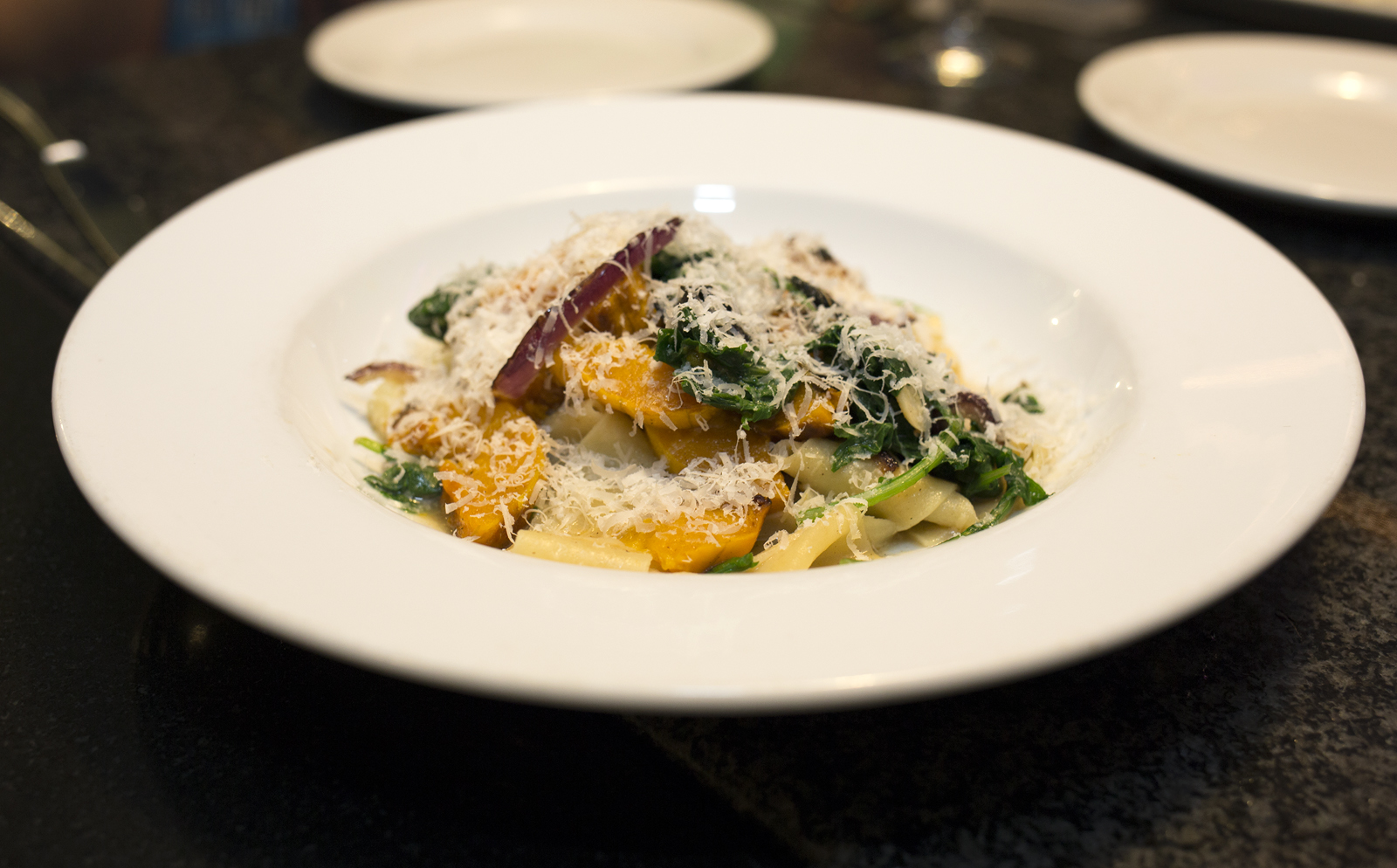 Whatever caused Rhonda and Tony to close the doors of Monticello, EASTsmf deserves to succeed with its healthy, top-notch culinary offerings in a homey setting, situated in a fairly central location that tends to welcome similar concepts. And it deserves your attention.

“We wish we had come directly to Sacramento in 2008 after our two-year stint as a pop-up in Winters, but that’s hindsight for you,” reflects Rhonda. “We’re currently doing our best to live every day in the present, and while restaurants are hard, especially when you take the extra steps we do as far as sourcing and preparing everything from scratch, we’re very happy. This is a very pleasant place to work and live.”