Farm to Fork to Fame

Sacramento has long struggled with its reputation as a cow town. But with foodies the world over regarding our city as a culinary epicenter because of its proximity to rich harvests and ranches and its multitude of highly rated restaurants, Sacramento has decided to embrace its agricultural ties and plant its cow town flag proudly in the soil by proclaiming itself America’s Farm-to-Fork Capital and hosting its first-ever Farm-to-Fork week.

The festivities organized by the Sacramento Convention and Visitors Bureau involved large-scale events. The week kicked off Sept. 23, 2013 with the Cattle Drive from the Tower Bridge up J Street, followed by Legends of Wine on Sept. 26 featuring local wines handpicked and poured by internationally recognized culinary experts Daryl Corti and David Berkley on the west steps of the Capitol building. The Farm-to-Fork Festival on Capitol Mall followed on Sept. 28, and the event culminated in the Tower Bridge Dinner on Sunday, Sept. 29. Additionally, restaurants all over town hosted their own farm-to-fork showcase events. 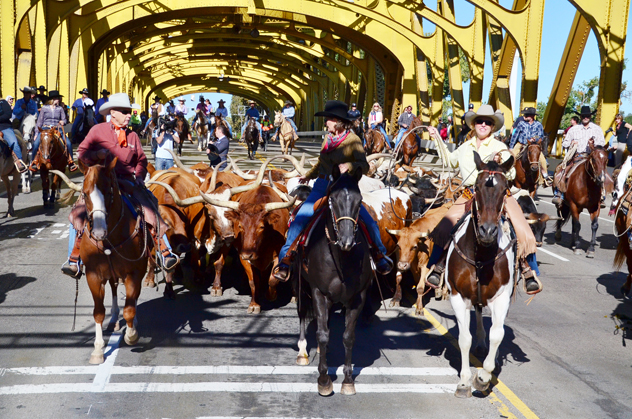 This was no easy undertaking, but well worth the effort, said Sonya Bradley, Chief Marketing Officer for the Sacramento Convention and Visitors Bureau.

“For the farmers, ranchers, food producers, chefs and restaurants, it’s their livelihood,” she says. “While our role as a sales and marketing organization is to give this movement some context and push it to the forefront so that one day saying, ‘America’s Farm-to-Fork Capital’ becomes as natural as saying, ‘Sacramento Kings.’”

On a picture-perfect Saturday in late September along Capitol Mall, with views of the Capitol and Tower Bridge flanking the rows of booths and food trucks, the Farm-to-Fork Festival was in full swing. Among the neatly lined-up booths were California Restaurant Association, Lucky Dog Ranch, Del Rio Botanical, Passmore Ranch, Full Belly Farm, Nugget Market, Save Mart (yes, they source local produce, too!), and the Dairy Council of California, who showed up equipped with a mobile dairy classroom.

Among a sea of marketing materials promoting local businesses, Downtowngrid’s booth also handed out a flyer listing all the farmers’ markets in Sacramento. There is at least one farmers’ market cropping up somewhere nearby every day of the week, making it easy for people to buy local, seasonal food directly from farmers and other vendors who produce food within the proverbial stone’s throw. I wondered: did cities elsewhere in the country have as many proximal farms and farmers’ markets available to conscientious consumers?

Josh Nelson, whose stepfather is Randall Selland, owner of The Kitchen, Selland’s Market Café and Ella Dining Room and Bar, says that Sacramento has been America’s Farm-to-Fork Capital long prior to its recent self-proclamation.

Since opening The Kitchen 22 years ago, they’ve always shopped at the farmers’ markets for the ingredients used to create their menu. They weren’t philosophically locavores initially, but he explains that our region’s best-tasting food comes from the farmers’ market due to its freshness. Sacramento is centered within the largest piece of Class 1 soil in the world, in a longitudinal belt running in California from Bakersfield to Redding, while also being uniquely positioned surrounding two rivers. For this reason, he feels that we’re just inherently the capital of farm-to-fork fare.

He believed that to declare Sacramento as such, officially, would cause outsiders to connote Sacramento with world-class dining, while also inspiring its residents.

“Food and agriculture is what we are. The health and environmental benefits of eating locally grown food are now being nationally recognized,” he says, making this a strategic time to make the claim.

Feeling strongly that to tout Sacramento as America’s Farm-to-Fork Capital would promote the region and the already-popular concept in a positive way, the Selland family spent their time, money and resources to create the America’s Farm-to-Fork Capital logo and secure the handles on various social media outlets and the Web address (Farmtoforkcapital.com), wrote the resolution, and with the help of Patrick Mulvaney of Mulvaney’s B&L in the final meeting, pitched the idea to the Sacramento Convention and Visitors Bureau and Mayor Kevin Johnson about one year ago. 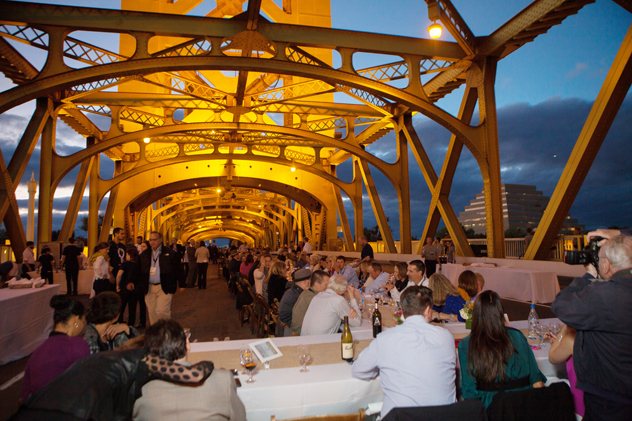 They don’t think they deserve full credit for this endeavor by any means, though.

“What makes [the movement] special is that it’s not a single effort— it doesn’t work if it’s one person, one voice, one restaurant,” Nelson explains.

It’s clear the community has shown its support. If you look at the success of the Tower Bridge Dinner—whose tickets sold out by 3:30 p.m. the day they went on sale—or the fact that 25,000 people attended the Farm-to-Fork Festival on Sept. 28, it is obvious that this initiative has an army of locavores backing it.

According to Nelson, becoming America’s Farm-to-Fork Capital isn’t the flip of a switch, it’s an endless walk down an arduous path that involves not just marketing and politics, but grassroots participation. But thanks to the reinforcement of the local government and the SCVB, the platform is in place for the hardworking community to continue to roll out the initiative, the benefits of which are both social and economic.

“It isn’t all about the festival,” he says. “It’s just one week that is part of a year-round effort, and the festival is to celebrate the region.” Sonya Bradley agrees.

“[Farm-to-Fork Week] allows us to tell a very real and authentic Sacramento story,” she says. “This region was built on agriculture—just drive 20 minutes south to the Delta and see the rows upon rows of pear orchards, or north along I-5 and see the acres of rice fields… It’s such an integral part of our heritage.”

All Photos Courtesy of the Sacramento Convention & Visitors Bureau