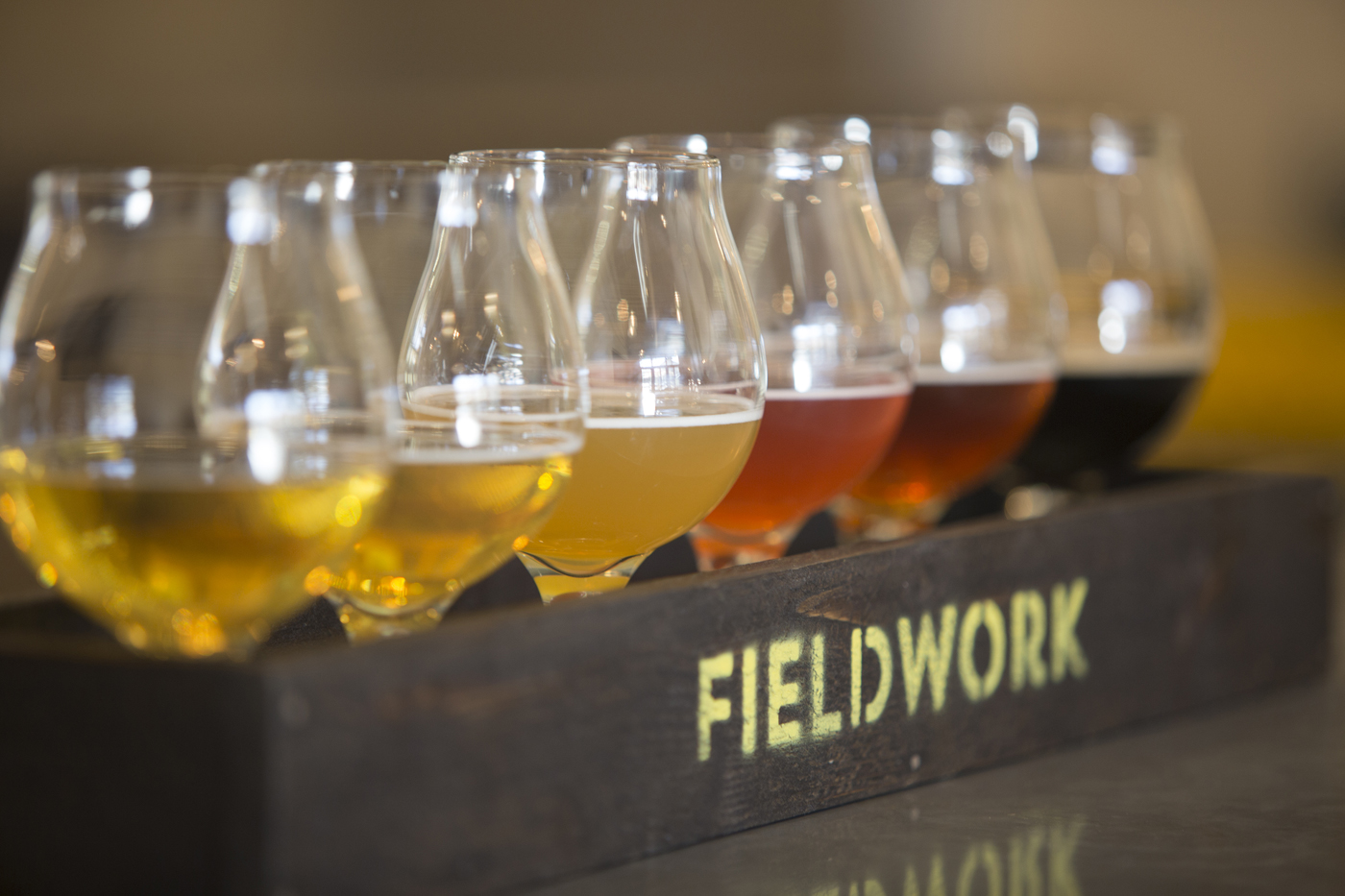 I’m not sure what I love more about Fieldwork Brewing Company: the ever-changing, expansive draft list or the fresh beers themselves.

Every experience in a Fieldwork taproom is a new one. Such a marketing model may beat out Russian River’s reign of elusivity (how many more years are people really going to continue to stand in line for hours for Pliny the Younger)?

Elusive is something Fieldwork is not, with three taprooms open daily—in Berkeley, Sacramento and Napa—and two more on the way: one in Monterey and the other in San Mateo. Restaurants like Empress Tavern, Dad’s Kitchen and Selland’s, and local craft beer taprooms are also proudly carrying it and doing special pairing nights.

Along with the new slate of beers weekly—sometimes more often—comes quality and intrigue. Instead of having flagships, co-owners Alex Tweet and Barry Braden choose to put out every new brew idea that pops into Tweet’s head and tweak or experiment based off consumer feedback and for sheer fun. 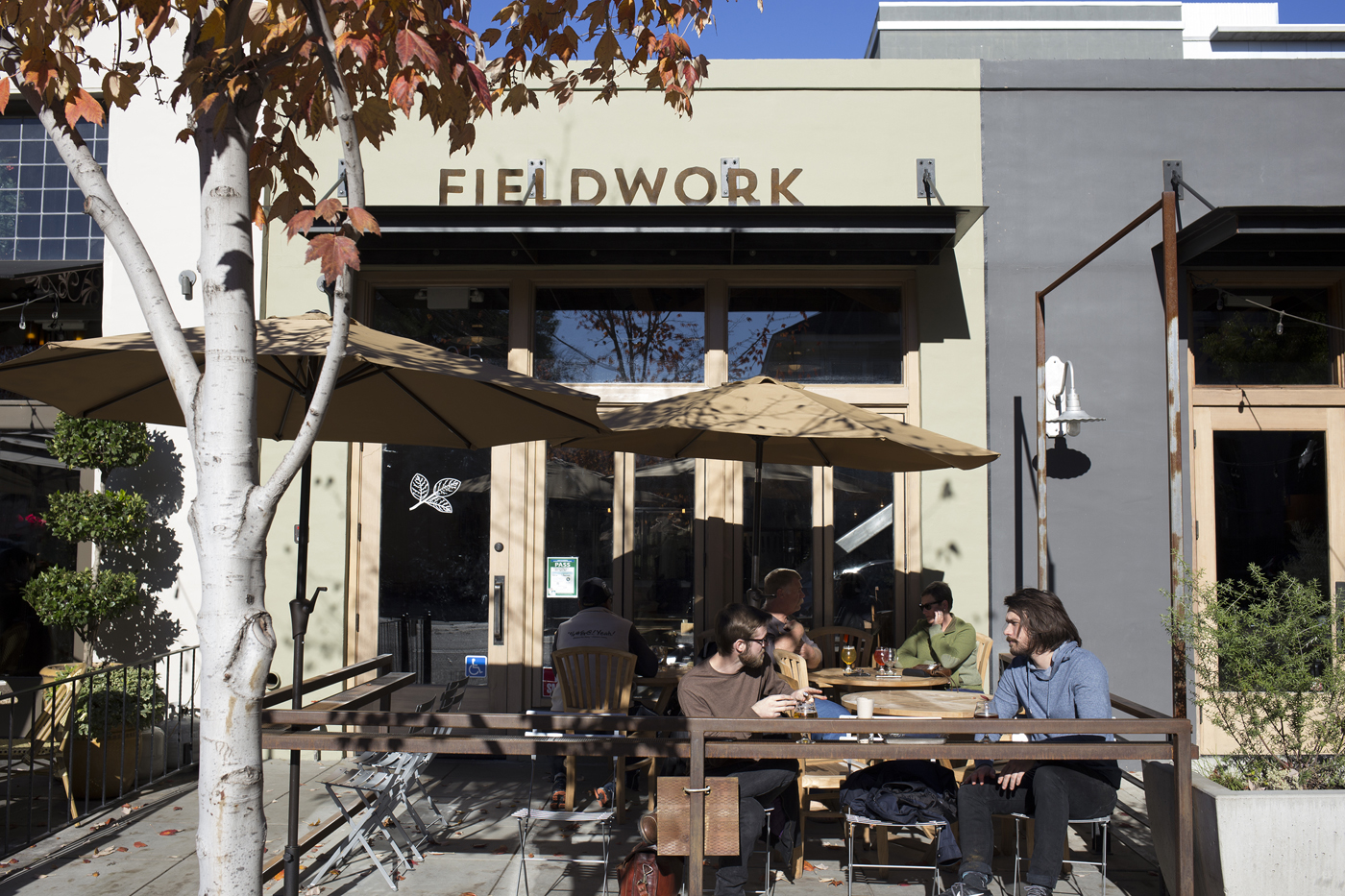 “We’ve made over 130 different beers in the 19 months we’ve been open,” Braden says by phone the week of Thanksgiving, speaking from Fieldwork’s city of origin, Berkeley. “Each one is unique and creative. There is no shortage of things in his mind and where a lot of breweries focus on three to five beers, we don’t do that. That is why people come to our taproom.”

Braden and Tweet met five years ago in San Diego and got to know each other around beer. Braden was part owner of a local brewery and had owned a restaurant for a few years. Tweet is known in the brewery world through both Ballast Point and Modern Times.

He landed a brewing gig that paid peanuts at Ballast after winning a homebrew competition for his now-commercially sold Indra Kunindra. Tweet went on to brew for Modern Times in San Diego but always wanted to start his own brewery, Braden says.

Braden, who is originally from the Bay Area, moved back home with Tweet agreeing to relocate, and the two launched Fieldwork in 2014. Shortly after, they hired Josh Olenberg-Meltzer, former New Helvetia brewer from Sacramento. 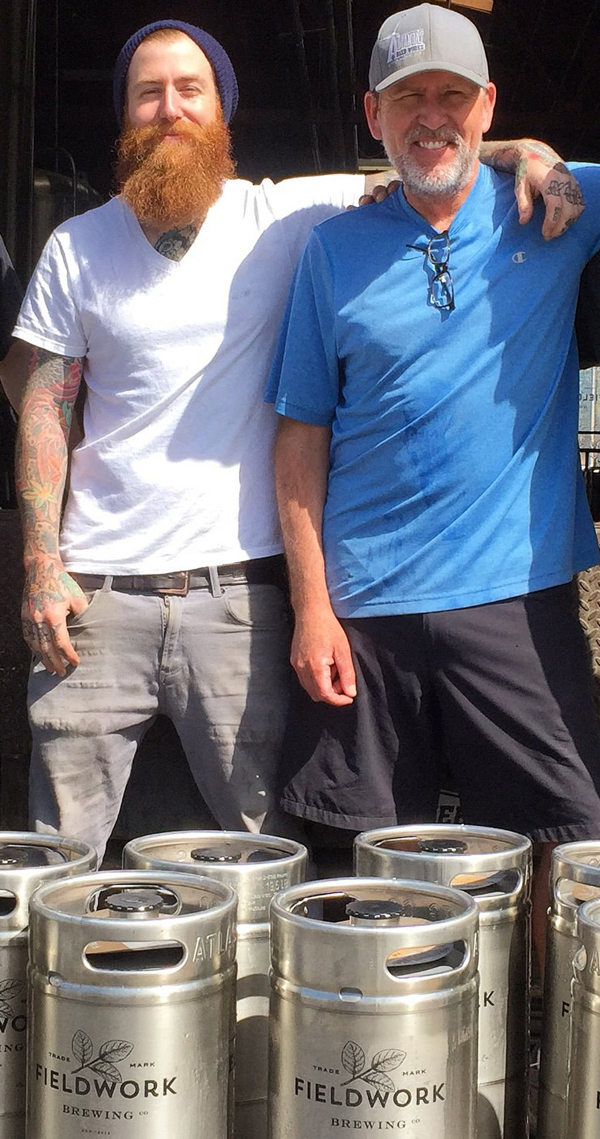 Braden tells the story of meeting Olenberg-Meltzer’s wife at a Sierra Nevada taproom in Berkeley not long after her husband applied for the Fieldwork advertised position. They start talking, Josh meets them at Rare Barrel, a sour beer brewery also in Berkeley, and history continues to be made in the Northern California beer world.

Together, and with their staff now in three locations, the Fieldwork crew has 10 to 12 beers fresh and ready in kegs, bottles and cans at all times.

“The big breweries have massive investments in quality control, labs and infrastructure to make the same beer over and over,” Braden says. “We’re just a tiny little brewery. Batch to batch, it’s always interesting to taste the nuances. We don’t have any plans to make that leap to a very large production.”

Some customers may find that hard to swallow once they’ve found their favorite Fieldwork beer. Cult-like followings are beginning to arise online as people wait to see each day’s latest draft list.

“We describe it as the solar system,” Braden says. “There are planets that are closer to the sun that orbit more frequently, so you’ll see some beers in rotation more often, but there are others that take longer to orbit.”
I was relieved to hear straight from Braden that White Mocha will make a comeback early in the New Year (and after receiving that news, I’m holding them to it).

My first experience with White Mocha occurred almost three months ago, and it left a lasting impression, so much so that I photographed the tasting notes—well-crafted, field research-inspired indie cards cleverly bound to the menu in each taproom. Tweet seemed to know me personally in his notes on White Mocha, though we have yet to meet:

A recently made-up style consisting of three parts whimsy and one part gluttony, our Golden Stout, “White Mocha” is as pale as your traditional Pale Ale, but is packed with all of the flavors and aromas you would expect in a much larger, darker beer. We started with a grain bill that was light in color, but loaded in malt character, incorporating toasty and smoky notes. Next, we teamed up with Catahoula Coffee to design a coffee blend that would both replicate the distinct roast character expected in a typical stout, and also the bold aromatic notes you would want in your Sunday morning mocha. Lastly, we dosed the near finished beer with loads of local chocolate from TCHO to round out the stout and mocha concepts. White Mocha is a rare breed that is rich enough to be considered a dessert beer, but lacks the typical cloying sweetness of the style remaining drinkable and sessionable in its own right. 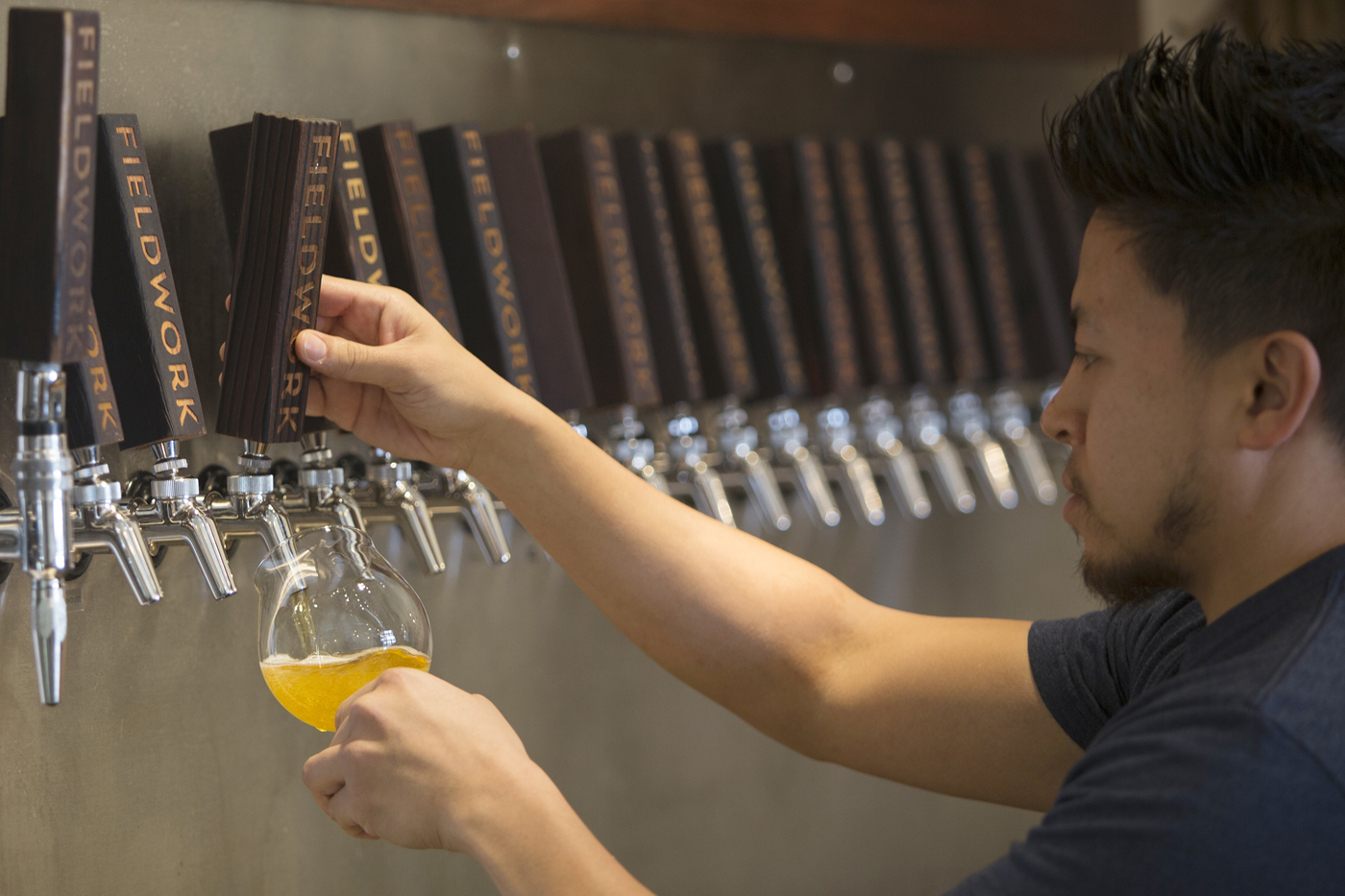 For someone who loves menus, mocha and F. Scott Fitzgerald, the marketing got me. Braden says it’s all part of what Fieldwork is hoping to accomplish, a unique perception and the kind of customer experience that leads to creativity.

When deciding on the location of their second taproom, now open at 1805 Capitol Ave. in Sacramento, the customers were an important factor.

“Part of our model was we wanted to serve the beer as fresh as possible and be able to talk to guests about what we intend for the beers,” Braden says, noting that the type of license they received allows for up to six satellite taprooms of this nature. “Sacramento was on our top 10 list. There is a sophisticated and engaged beer community so it was a natural place for us to go. We looked at a lot of spots in Sacramento, but the Midtown spot kept calling my name while I was up there.”

Braden adds that the team has been surprised by the initial results of the Sacramento taproom and as a result is making more diverse options. 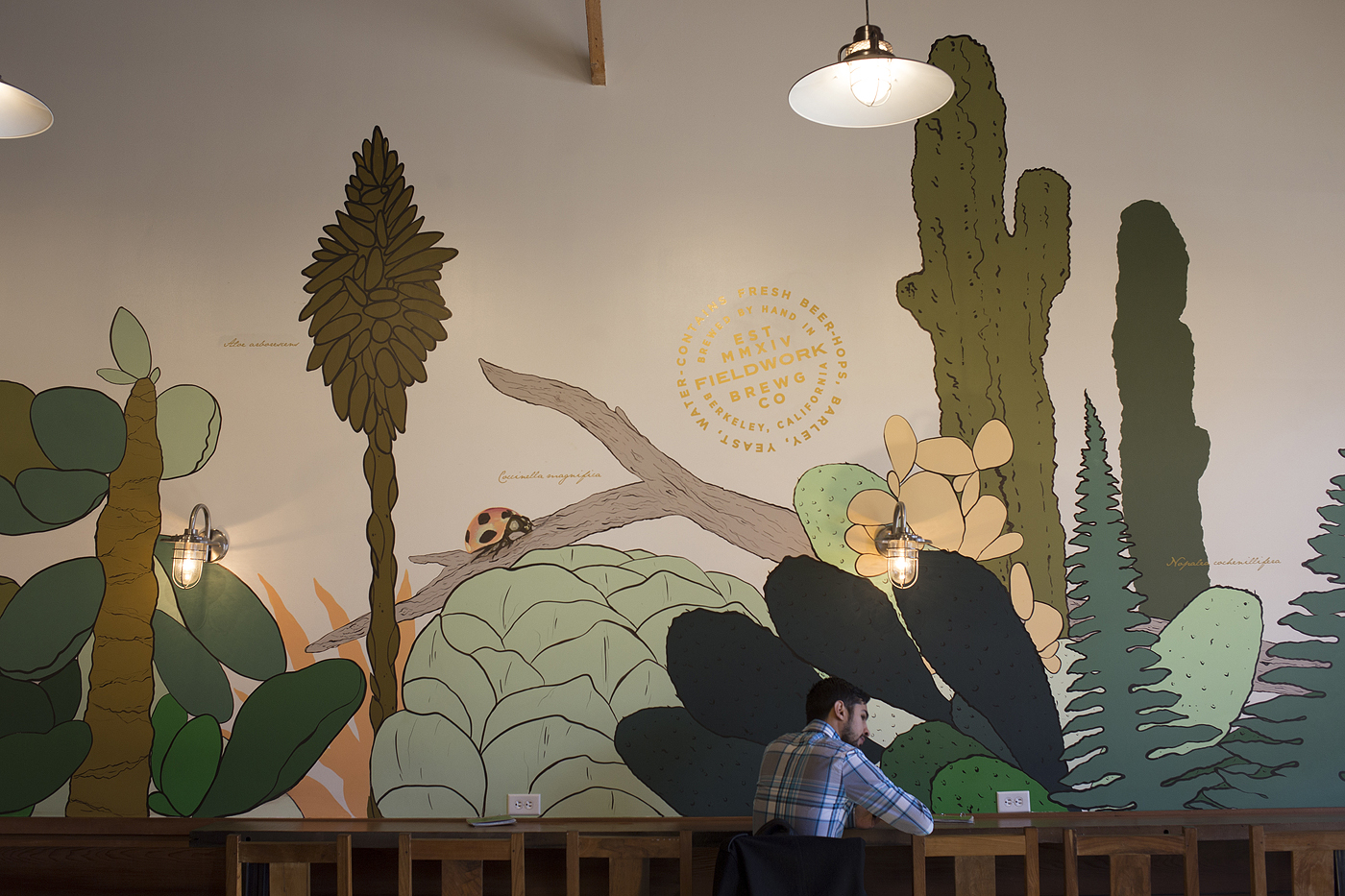 “We know Sacramento is a town that likes hoppy beers but we were selling a keg a day of our gose. And then our strawberry sour [did well],” he says. “Having diversity is important and Alex’s brew schedule reflects that. There is always a mix of hoppy and saisons and tart beers.”

Midtown is catching the attention of several others in the industry. Golden Road Brewing, a Los Angeles company bought by Anheuser-Busch InBev last year, plans to open a brewpub in Midtown and this has caught the attention of locally owned Capitol Beer and Taproom.

“We cannot just sit back and support a multibillion dollar corporation that will ultimately become direct competition to us and our friends who’ve worked so hard to put Sacramento on the beer map,” Kenny Hotchkiss wrote on Capitol Beer’s Facebook page Nov. 11. Hotchkiss says his shop will stop carrying Golden Road, Ballast Point, Saint Archer, Goose Island and Hop Valley, all owned by AB InBev.

Braden says he respects Hotchkiss’s decision but wants to stay focused on taking care of his own business and people. “If Golden Road wants to move in, that’s their prerogative,” he says.

For now, Fieldwork is focused on seeing their taproom in Napa, which opened last month, succeed and planning to open the San Mateo and Monterey rooms in the spring.

If you’re reading this story the day it’s released, hope and pray Fieldwork still has cans of Bad Conduct, a chocolate maple imperial brown ale, still available. If not, keep an eye out for their Mexican hot chocolate beer, a Citra double IPA, a new batch of Pulp IPA and Tiramisu, an imperial brown ale on nitro.

Fieldwork Brewing Company’s Sacramento taproom is located at 1805 Capitol Ave. You can find out more about the company online at Fieldworkbrewing.com.