In A City Of A Thousand Breweries, Only Now Can You Pop Your Cork Any Day At Fizz Champagne And Bubbles Bar 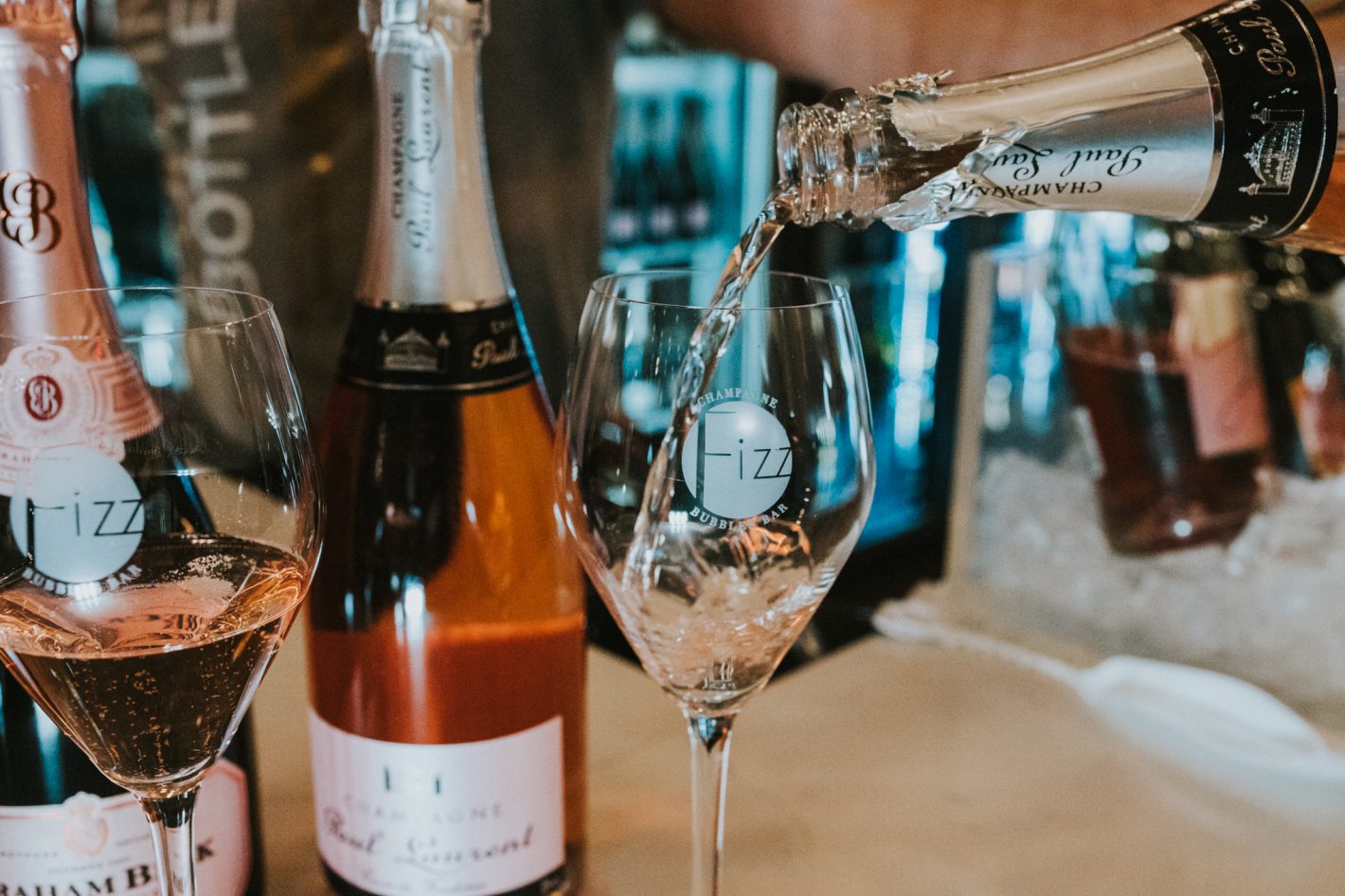 As the great painter and weirdo Francis Bacon once said, “Champagne for my real friends, and real pain for my sham friends.” The fellow has a point: You never drink champagne with people who suck, or because your day was crap. That’s whiskey’s job.

Fizz, the new bar in the Downtown Commons dedicated specifically to champagne and sparkling wine, looks more like a candy shop than a bar. Compared to some of the cavernous nightspots that abound downtown, Fizz is a modest, brightly lit space with a high ceiling that gives it a warm airiness. From the outside, it looks like a cozy party you actually wouldn’t mind attending. The neck foil on the bottles shimmer in glass fridges directly in front of the bar like chocolate on display, and the wallpaper and accent walls dance up to, but don’t quite cross, the bougie line. Gold pipeworks and fixtures above give the space an expensive, squeaky-clean feeling.

The word “fancy” does come to mind, but not too fancy for jeans—that cannot be said about some of the other slick establishments in the neighborhood around the Golden 1 Center. Patrons young and old, dressed for sports or dressed for the opera, seem perfectly at ease lounging and sipping a little bubbly in here.

Now if you are like most people, “champagne” is a catchall term for the carbonated plonk you crack open with panache when someone you love gets married, or maybe divorced.

But generally speaking, we are suckers for the stuff that the ads tell us is good, i.e. expensive. While virtually every other kind of alcoholic beverage has undergone an artisanal renaissance in the last 10 or 15 years, champagne (arguably the very symbol of good taste) has gotten surprisingly little attention.

Fizz Champagne and Bubbles Bar presents the opportunity to apply your snob skills from brewery hopping and wine tasting to sparkling wines. As you might imagine, the distinctions are vast and the sheer variety is, well, heady. With 122 varietals of sparkling wine available, this place has to have one of the most extensive selections in Sacramento.

You will find no snobs behind this bar, but you might encounter a few zealots, including the proprietor, Raymond James Irwin, whose business card proclaims him as Fizz’s “Chief Champagne Officer.” 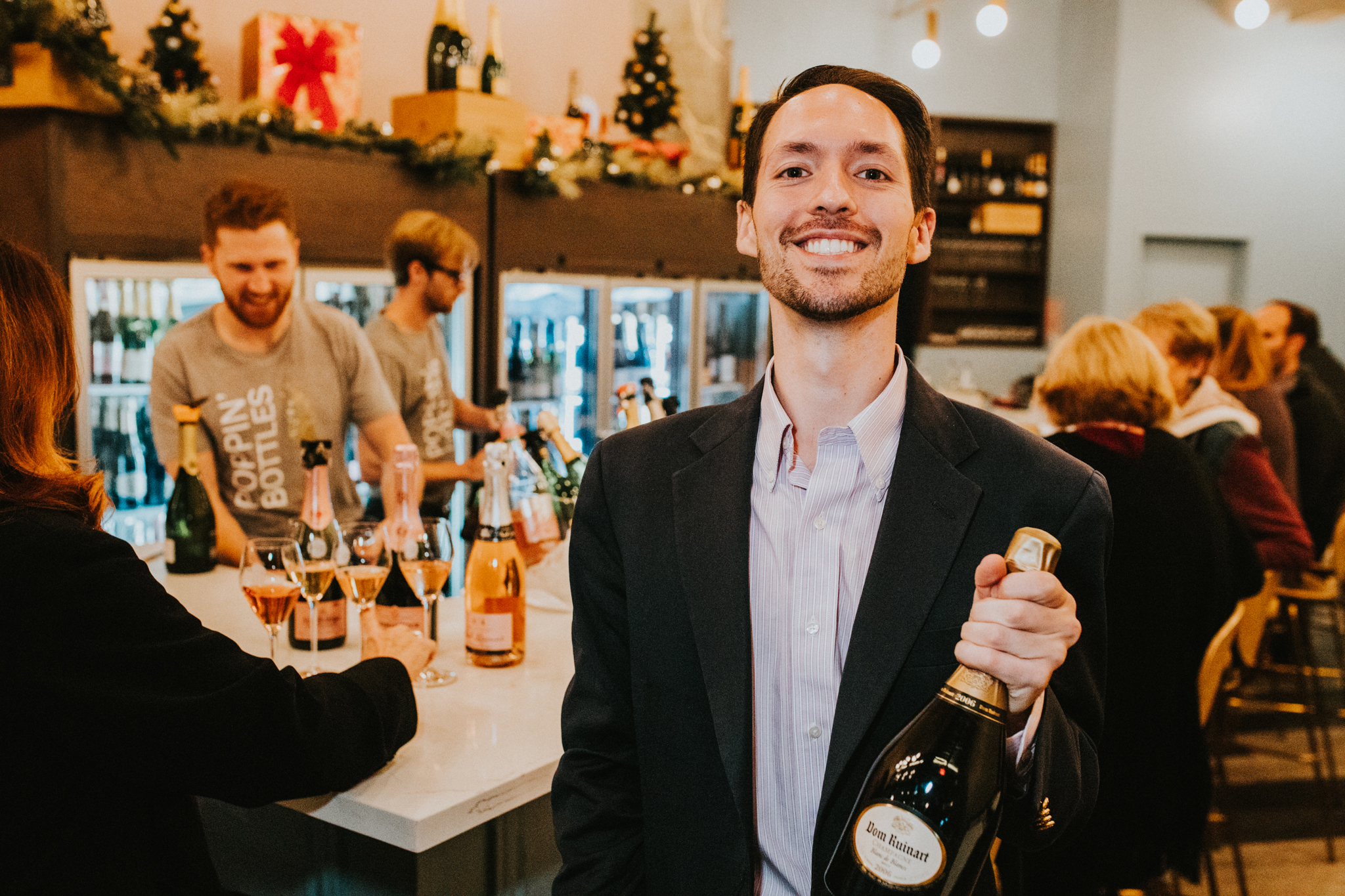 “Everyone loves fizz,” Irwin expounds in his sharp navy suit, complete with pocket square. “Why shouldn’t we celebrate everyday?” There’s nothing cuter than a young new business owner talking about their wares.

It’s clear Irwin has taken this as his doctrine, because he can brag that he has actually visited and met with most of the producers on his extensive international menu. When asked what prompted the idea for a bar that purveys bubbly almost exclusively, he recalls having a revelation upon entering a similar establishment in Chicago called “Pop.”

“Why is fizz something we only indulge during the holidays and special occasions?” he wondered, especially when there are so many different styles, and it makes people so damn happy. The more he learned about these effervescent elixirs, the more he felt convinced they needed a bar unto themselves here in Sacramento. When asked why he didn’t choose San Francisco he answered, “No one wants to go there anymore.”

So if you are one of those whose knowledge of fizz goes no further than the lukewarm Korbel someone hands you on New Year’s Eve, the flights are really a must. For the first-timer, this introduction reveals the kaleidoscope of flavor beyond “dry” and “sweet.” 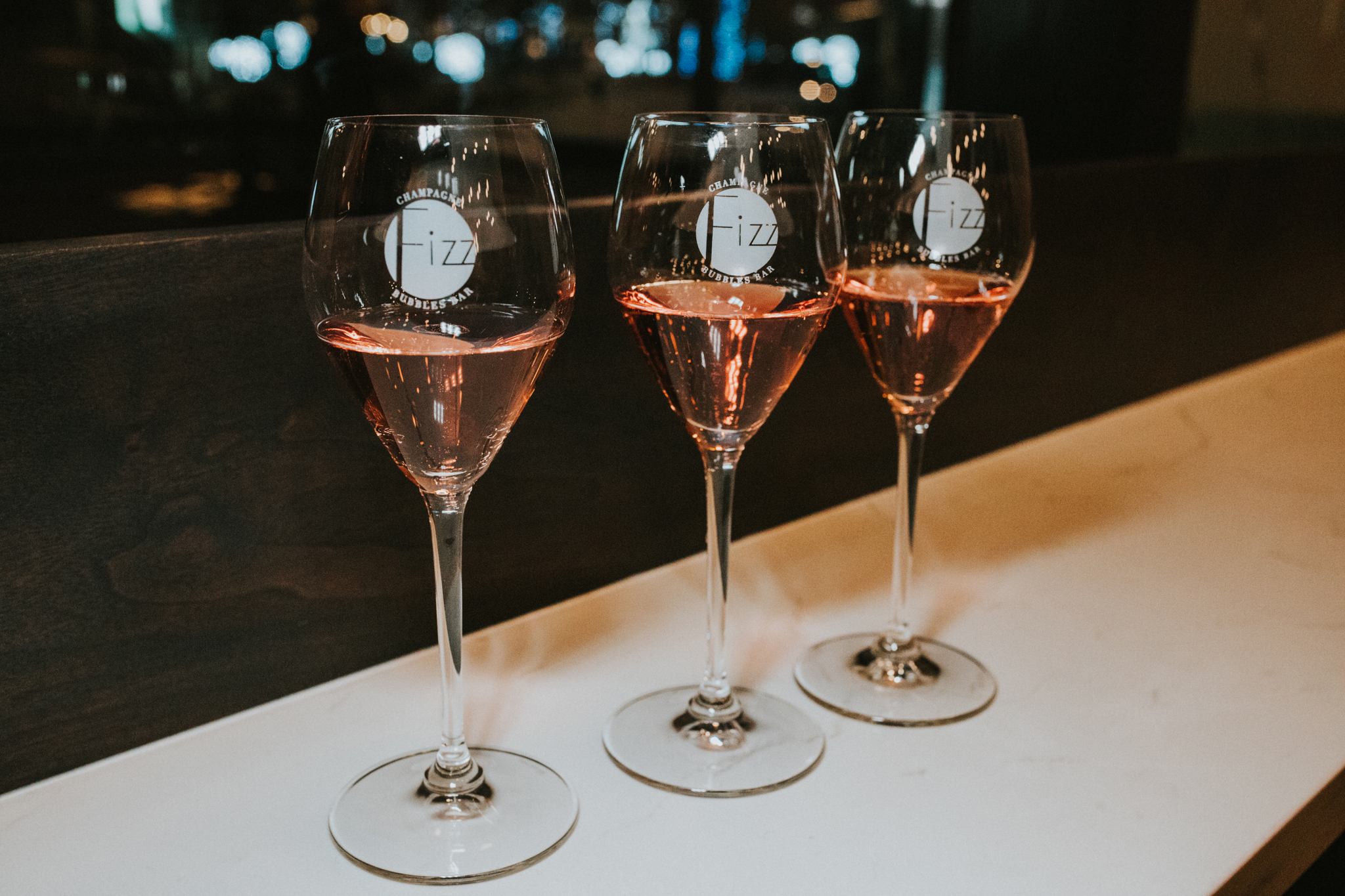 The “Rosé All Day” flight for $30 is three generous tasting pours from Mendocino, South Africa and France. The Scharffenberger Brut from Mendocino was a zinger: bright, rosy and smooth. Krug’s Grande Cuvée was like liquid marzipan, but not overly sugary or cloying. If you could sip a mink stole, that’s probably what it would taste like.

The menu at Fizz is constantly changing, and patrons have the option of ordering by the glass, half bottle, bottle or large format. It sounds expensive, but doesn’t have to be: You can get a completely lovely glass of Spanish Cava for $10 or go nuts and get a vintage Grand Cru from France for $700.

What Irwin and his small crew want to emphasize is the inherently social nature of this beverage, so the menu is constructed to encourage groups to go in on a bottle—the after-work decompress among coworkers or the pre-show drink among friends. Beware the arena crowd, however, because this place will likely be standing room only.

Another nice feature, though, is that in the almost two months since Fizz has opened its doors, the steady stream of guests aren’t just arena run off. Irwin says it’s been pleasantly busy on off-nights, which bodes well for the business and means it’s still possible to get a table. 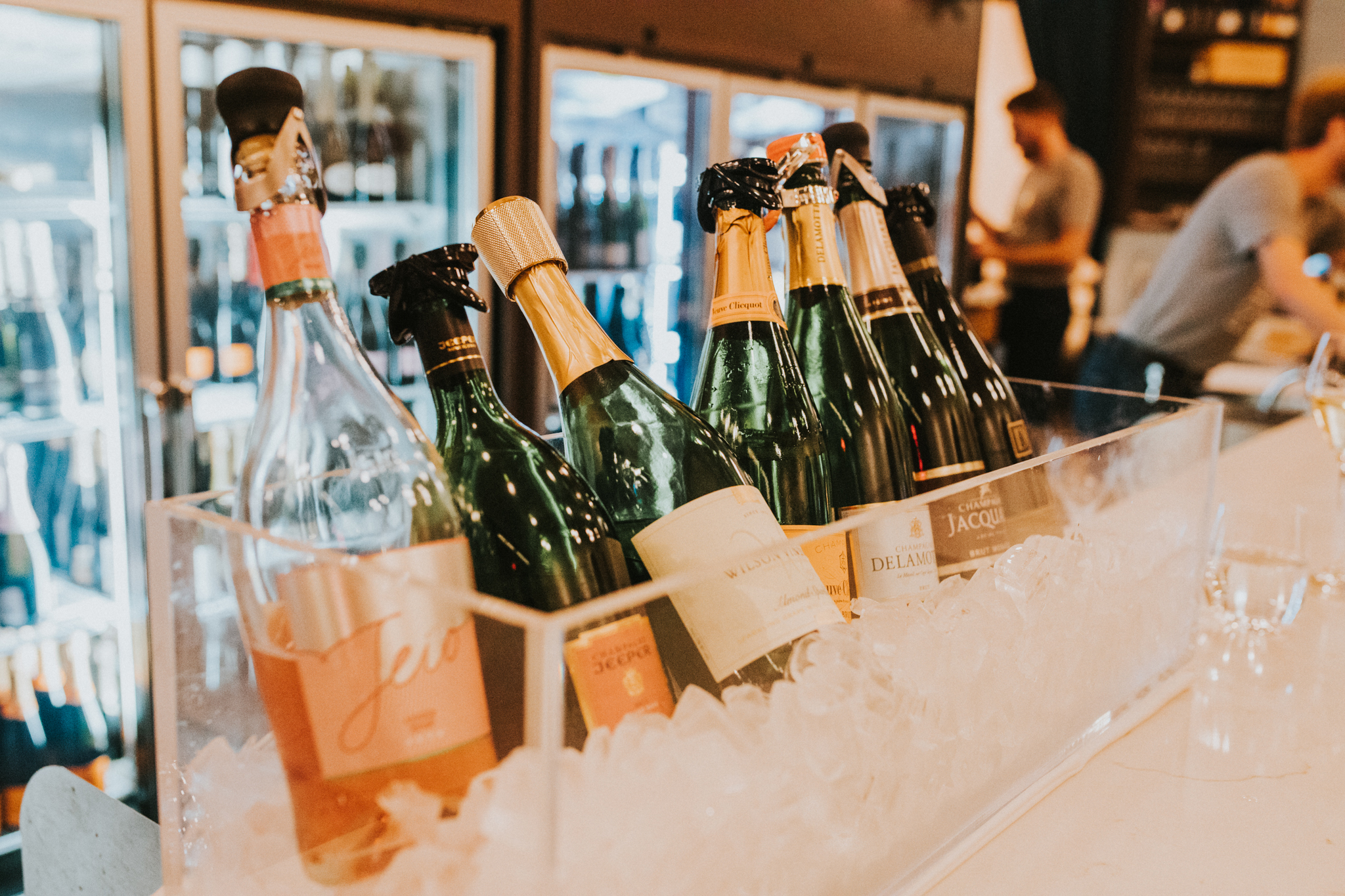 Ever invited a first date to a brewery only to discover this person doesn’t drink beer and when they asked about wine, they got the stink eye? Well, that won’t be happening here. There’s also a small selection of “still” wine and some highly drinkable Belgian beers on the menu so that Fizz is safe for a first date.

There are a few nibbles available as well, but don’t arrive anticipating a full meal. As one might expect, Fizz has the cheese/olive/charcuterie trifecta, and the Nouveau Cali standard: avocado toast. Oysters on the half shell, sashimi and Croque Monsieur are also available if you want to keep going with the French-style swank. In another extravagant and welcome shift away from duck tots and spinach salad, Fizz actually offers caviar. Yes, that’s right, you can now eat caviar (on your avo toast) and drink champagne on a Tuesday for no reason whatsoever. Clink!

If there is a complaint, it’s the location. As is always the case with the hyper-revitalized area of DoCo, parking stinks and taking an Uber is pricy whether there is an event or not. In other words, getting there feels like living in Los Angeles. However, you might as well whole hog and valet at the Sawyer, darling, because, Fizz is, pardon the cliché, worth every penny. 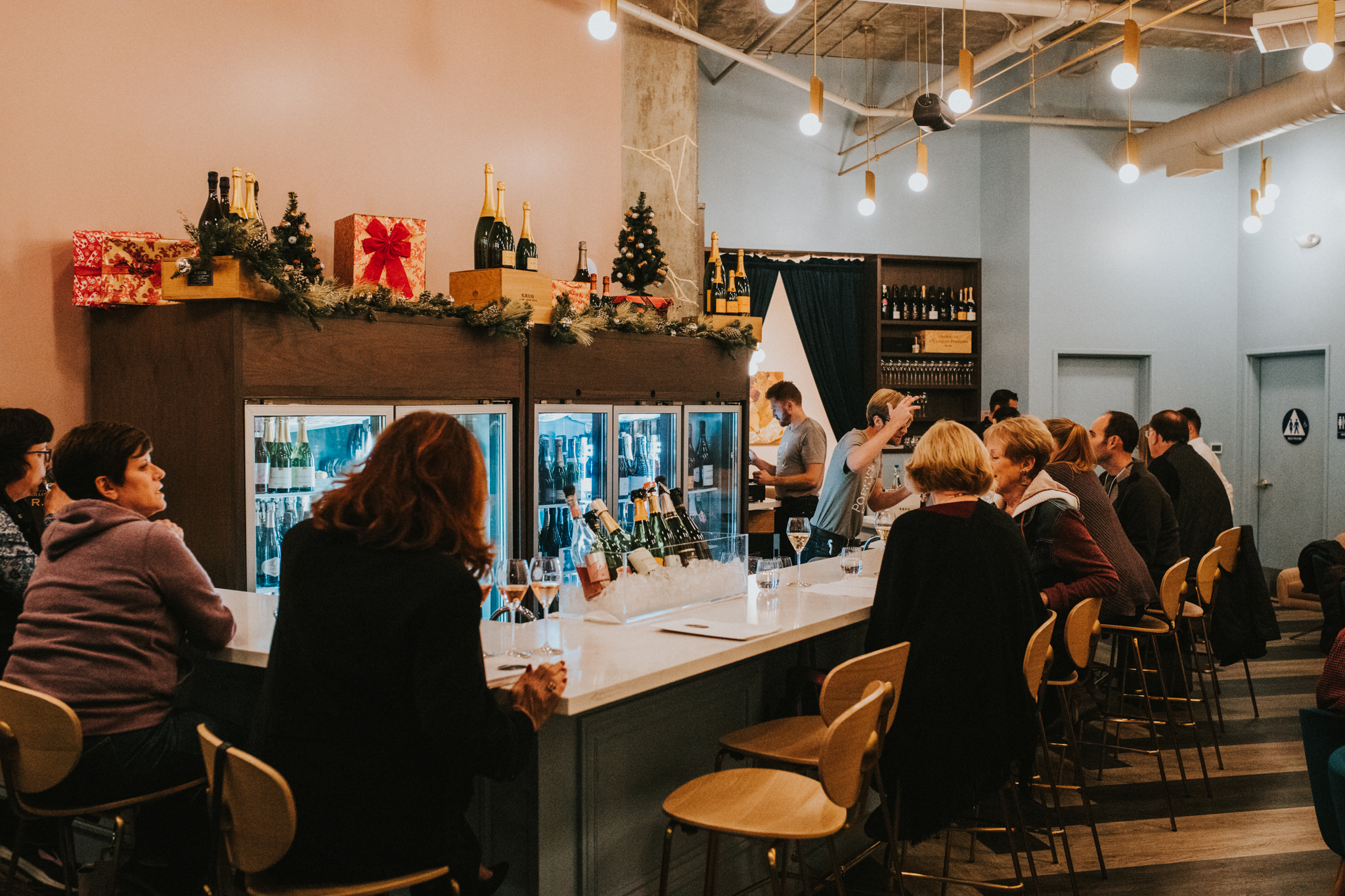 For more information about Fizz Champagne and Bubbles Bar (615 David J. Stern Walk #105), visit Fizzinsac.com, or just cruise in and get your clink on!