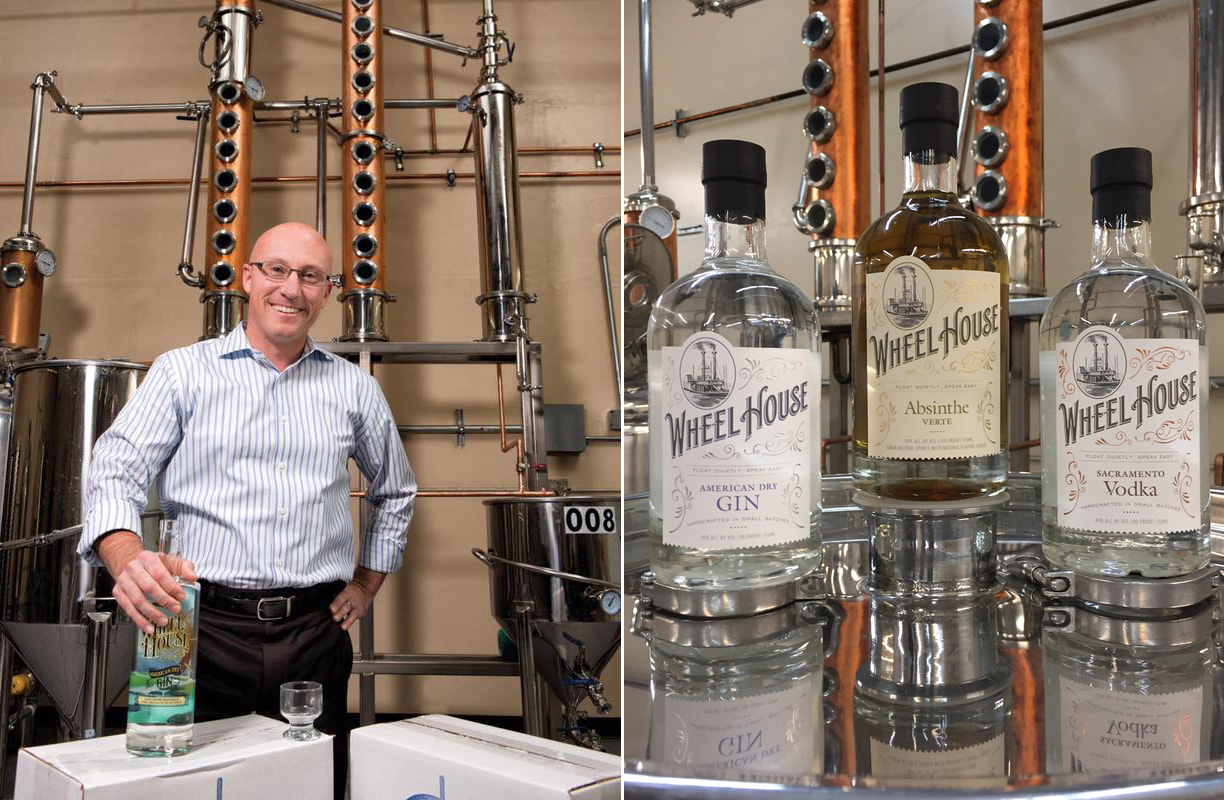 Greg Baughman points to a copper cylinder that towers high above his head. Through tiny windows in the cylinder, you can see liquids thrashing about and excitedly bubbling.

“Something violent but beautiful happens in there,” he says.

Baughman is referring to the 160-gallon side-mounted column still that he built himself and is used to create all of his liquors—a project that cost tens of thousands of dollars and countless hours of manpower. Each liquor made at Gold River Distillery goes through this 12-tiered tower to fulfill its destiny to become a spirit.

Gold River is the first legal distillery to open in Sacramento County since prohibition. It’s name is a nod to the saloon culture of the Gold Rush-era and the rebellious reputation Sacramento has when it comes to liquor. During prohibition, Sacramento was said to be one of the easiest places to get a drink, and riverboats on the Sacramento and American rivers would often transport booze as well as operate as actual speakeasies. Baughman gave his liquors the “Wheel House” moniker as a way to honor the ship captains who risked it all to make sure Sacramentans could get their drink on all those years back.

Baughman opened Gold River Distillery almost five years ago, propelled by his love for quality liquor and his interest in understanding how it is created. He had no professional background in distilling but learned everything mostly through watching YouTube videos. It was hard work to physically learn how to distill, but most of the work came with learning codes and legalities. Baughman’s 9-to-5 is as an Environmental Health and Safety Specialist, so luckily, he had a good handle on all of the technicalities.

“This industry is pretty unexplored in our area so far,” he says. “It takes a lot of dedication to fulfill the aspiration to open up a distillery. It requires a lot of patience and time. You have to constantly know the codes and laws and constantly check to make sure you aren’t accidentally violating anything.”

At the same time, he says that California laws are also quite distillery-friendly when you learn the language of the laws: “Currently, a micro-distiller can make upwards of 100,000 gallons of distilled liquor, not including brandy, which is pretty generous. We actually have a lot of room to make some cool stuff happen.” 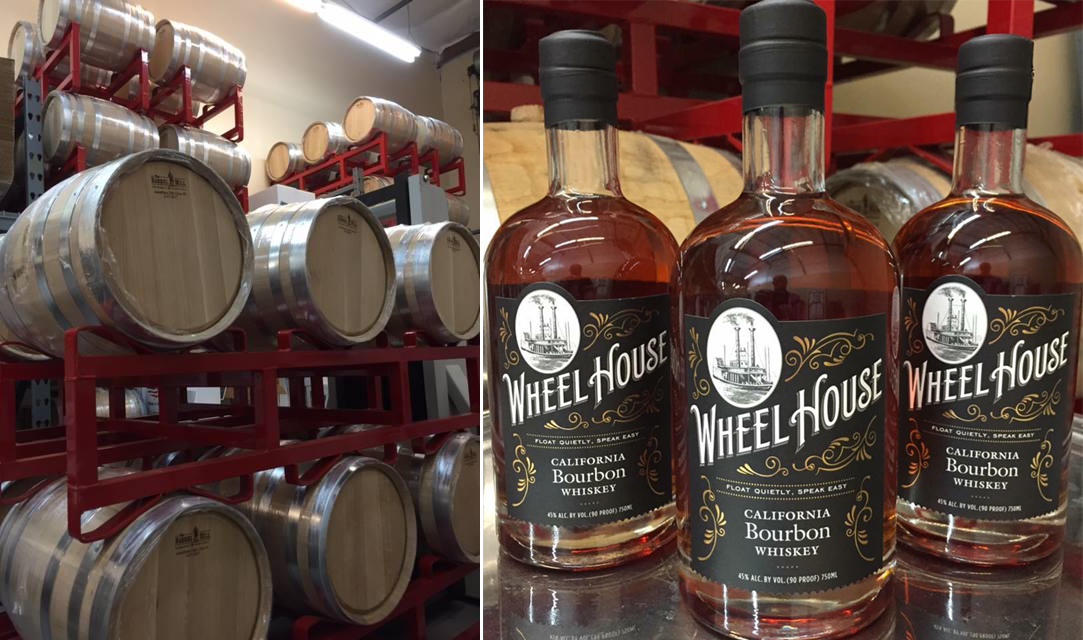 Baughman’s distillery is small but mighty. A few dozen tiny wood barrels line a section of the warehouse, aging the house-made whiskey to perfection. While talking to me, Baughman is filling some brand new empty casks up with water. He is conditioning the barrels to expand the wood and make sure there are no leaks. When the water starts to overflow from the drilled holes at the top of the barrel, he scurries over and moves the small white hose, filling them over to the next barrel.

“We are using these for our newest product, the Apple-Jack whiskey,” Baughman excitedly reports. “We are using tons of local, fermented apples to make a delicious whiskey just in time for the fall. It will be available in super limited quantities.”

Today, the distillery makes over six signature liquors that include different variations of vodka, absinthe, gin, whiskey and bourbon. You can try any of these creations at their Rancho Cordova tasting room (11460 Sunrise Gold Circle).

“My pride and joy is the Wheel House Malted Rice Whiskey. You can’t get anything like this anywhere else on the planet. It’s 100 percent Sacramento,” says Baughman.

The whiskey is distilled from 100 percent malted rice grain locally sourced from the Sacramento region, malted by a guy in the area (who is the only person who malts rice on this side of the planet) and distilled in Rancho Cordova. It has a unique flavor profile that starts off as a bourbon and leaves your mouth feeling like you just drank a nice, smokey scotch. It has deliciously sharp, spicy notes to it. Rice grain is a troublesome ingredient to distill with, but Gold River mastered it over meticulous experimentation.

Another unique star of their lineup was the Wheel House Absinthe Verte. This beast of a liquor is a true absinthe distilled from wormwood, anise and fennel, macerated in neutral grain spirit. It has very forward notes of black liquorice, and is usually treated with a few splashes of cold, distilled water before you drink it. They don’t call it “the green fairy” for nothing—this stuff is powerful, to say the least.

Some of Gold River Distillery’s earliest and most popular spirits are their gin and vodka. Their vodka is incredibly versatile and goes great in a mule or a mojito. Their gin has a nice mixture of botanicals that give cocktails a subtle, fragrant essence. If you visit the tasting room, there are shakers full of the dry ingredients that each liquor uses. Some have different varieties of toasted rice, while others have mixtures of spices, herbs and malts. The tasting room attendant welcomes you to smell each while you are tasting. 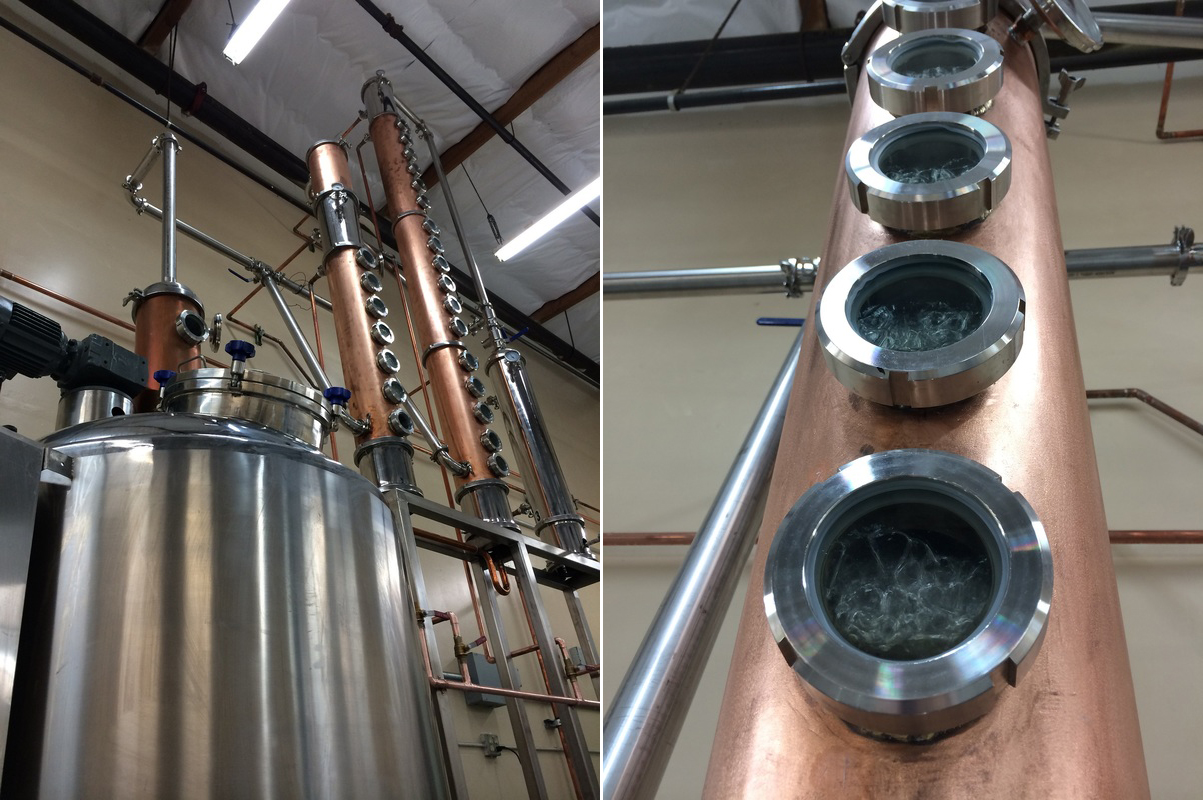 A huge part of visiting the headquarters is that you get educated on the culture of distilling as a whole; people are often proudly guided to the back of the house to see where the magic happens for themselves. They ferment, distill and even bottle under one roof. The distilling quarters looks like a small-scale beer brewery, with deceptively miniature copper and stainless steel kettles that churn out about 500 bottles of booze per week, depending on the season. Unlike beer, which takes several weeks to make, some liquors are ready to serve within mere days which makes getting more product out a little easier. As far as aging bottles, Gold River also sells oak coils, which can be inserted into the bottle for as long as you’d like to give it more of those aged-barrel notes.

Gold River Distillery hopes to expand in the next few years, and they’re seeking investors to help them make that happen.

“As I see the craft cocktail industry really take off, I also foresee it being truly driven by the micro-distilleries that are starting to pop up,” Baughman says. “The bars downtown are doing a really good job of getting that local mentality out there, but at the same time, there aren’t that many craft distilleries to choose from. I can see that changing soon, and a lot of bars will start getting a lot of local product to pull from in the next few years.”

When you visit bars, whether it be for cocktail week or beyond, make sure you support local and ask for a pour of something from Gold River Distillery.

For more information about Gold River Distillery, visit Goldriverdistillery.com. The Rancho Cordova tasting room and store (11460 Sunrise Gold Circle, Rancho Cordova) is open Wednesdays by appointment only, as well as Fridays 4 – 7 p.m. and Saturdays 11 a.m. – 3 p.m. Private tours can be scheduled by appointment, too!