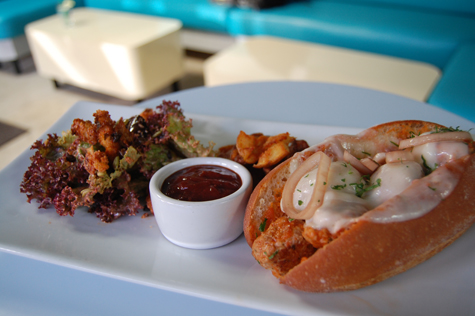 K Street seems like the place to be these spring days in Sacramento. Many shops, ventures, bike routes and bars are found from downtown to the Business 80 on-ramps.

However, most pertinently for our foodie purposes, a plethora of places to eat can be found on this path. As the season has coyly exhibited its sunny splendor, one eatery has emerged from a sort-of hibernation with a patron-pleasing epicurean sensibility.

Although the Golden Bear didn’t completely stop selling pints of beer, it reopened in the middle of March with renovations done to its tail end. Owners Jon Modrow and Kimio Bazett kindly took time to chat with Submerge to give us the skinny. The location’s previous owners built an illegal patio addition to this 1840s structure, which ultimately came to be a fire-code violation and renovations were required, Bazett said.

For a bar with an obvious sense of California pride, Bazett and Modrow had a group of UC Davis design students and friends create branding and interior aesthetic. In complete concurrence, the owners jumped on board with the contemporary furniture and bright, inviting color splashes.

They wanted to keep design cohesive throughout their bar, using a “monster money budget” to remodel the indoor back patio.

Cool, custom upholstered booth-ettes are paired with sheen-y tables and accented by hanging cylindrical lights–the likes of the oil lamp’s electric brother. Removable skylights and high-powered fans to suck cigarette smoke out of the patio make the patio an indoor/outdoor hybrid.

The Golden Bear entrepreneurs seem to have no intention of letting any half-assing happen when it comes to food, and brought on a new chef to be the ultimate addition to the “top to bottom” renovations recently revealed.

A few weeks fresh off a year cooking for the Highcroft PatrÃ³n Racing Team, passionate young Billy Zoellin is the new executive chef accomplishing clever culinary feats with his “punk food” and gastro-pub fare, something they all agree “seems to be what Sacramento is missing.”

The Golden Bear has one of the only chefs who shops personally at farmers markets. This act of taking that food and “making it your own” is what Chef Billy considers “punk food.”

Everything is prepared in-house, using local products (within a 100-mile radius) and consciously attempting to keep the bar’s carbon footprint as small as possible, Chef Billy said.

Having a clearer conscience about serving customers, patrons and friends healthier food is a bright point for Bazett, he said.

Being a good little eater, I went with my gastro-instinct, trying the fried cheese curd small plate ($5), Bledsoe pork meatball sandwich ($9.50) and a few “smashed fries.”

Pan-seared and served with a romesco aoli, the melty drops of cheese had just the right amount of cheese crust crunch and creaminess. How can you not love cheese?

I’ve come to truly appreciate pork (thanks to the beau), and the pork flavor of the meatballs in the sandwich successfully tasted true. Seasonings, along with an understated “red sauce” clearly made from fresh tomatoes, accentuated the eight mini ping-pong ball-sized meatballs. Lightly pickled shallots offered a not-too-tangy, nor too-salty, vinegar tinge and complemented the meaty sandwich, topped with slightly pungent provolone cheese. Spongey Bella Bru streak roll worked nicely as an encapsulating bread bed, holding and absorbing sauce and flavors.

A choice of smashed fries or salad accompanies sandwiches. For a buck more, eaters can opt for the red leaf Caesar salad. It’s a rouge version of a Caesar, paying ode to such Tijuana origins by featuring Lola Rosa lettuce, crisp capers, Cotija cheese, toasted pepitas, croutons and a smokey achiote Caesar dressing. Pleasing in flavor and just the right amount of dulled lettuce crunch.

Investigating these “smashed” fries, I found that if a fingerling potato wanted to be like a popcorn kernel, it could. Only the smallest fingerlings are par-boiled then bashed a bit, then fried (the only deep-fried menu item) in soybean oil and lightly spicy seasoned. A house-made ketchup in deep maroon made from ground New Mexico chilies, must-have-been-roasted tomatoes and nice amounts of pepper hold the fries hand while doing the flavor dance in your mouth. So happy they are.

As for dessert? The dudes who call the shots maintain a great relationship with their neighbor, The Dessert Diner, located next door. After asking about the possibility of a donut, Chef Billy said if it ever happened, bacon would be integral.

Local, fresh, well intentioned, “punk” and with a sense of humor, Chef Billy has pizzazz. And his cuisine is so sexy in a realistic way, like the posh “girl next door” of food.

I’m so excited about the playfully salacious future creation of a palate-cleansing house-made gummy bear that the Golden Bear Chef Billy hinted at. I won’t apologize for finding the concept to be rather casually provocative.

I know that burgers have been talked about and talked about in our town; however, I look forward to trying the Lucy burger: Sacramento’s introspective version of the cheese skirt burger, with fontina cheese hidden on the Inside of the Niman Ranch Angus beef patty.

Golden Bear has emerged like a well-intentioned youth does from college–looking the same on the outside, but with internal improvements. With future plans for a front-of-house facelift, The Golden Bear will become an even spiffier looking bar. Featuring a pint of beer and a shot of Jameson as the proclaimed house drink, pours parallel those of everyone’s favorite dive bar, but with the panache of an ultra lounge. Like an ultra high-dive neighborhood lounge where everyone is a VIP, dress code is as you like (with respect) and there’s no cover.