Hank Shaw is an inspiring food writer and instructor. By combining his experience as a cook, hunter and investigative reporter in his James Beard award-winning blog, “Hunter, Angler, Garden Cook,” Shaw is considered one of the preeminent voices in the country for living off what you can catch, forage, grow or shoot. His latest cookbook, Duck, Duck, Goose: Recipes and Techniques for Cooking Ducks and Geese, both Wild and Domesticated, covers everything from how to pluck a wild bird or purchase a domestic one, to how to render its fat or cure it as prosciutto.

With mantras like, “If it grows together it goes together,” and “Eating everything but the quack,” Shaw exhibits a very unique repertoire and self-reflective, almost romantic mission of bringing honest cooking to your loved ones, from wilderness to table.

He has even successfully converted his girlfriend and photographer counterpart Holly Heyser into a hunter and duck meat lover. The two spend their hunting seasons not far from their home just outside Sacramento.

Shaw’s first book, Hunt, Gather, Cook: Finding the Forgotten Feast, and his current one (for which he’s on tour), are intense versions of “Hunter, Angler, Gardener, Cook,” which he launched in 2007 and has made his career. His recipes are well-researched, broken down into simple steps with photos (mostly by Heyser), and interspersed with interesting commentary on trends, personal experiences and his own food evolution.

With hundreds of cookbooks published annually, Duck, Duck, Goose stood out from the competition with Shaw’s insistence on learning to cook a creature that has for years scared home cooks, but at the same time has been a main course across the globe for millennia.

“The core of why I wrote the book is for home cooks,” Shaw says one afternoon in Denver before a book event at Old Major, a sustainability-focused restaurant similar to Sacramento’s Mulvaney’s B&L.

Shaw’s goal with Duck, Duck, Goose is to teach home cooks as well as avid hunters the specialized skills necessary to cook the more adventuresome fowl, especially those who may need to shred their breast-only comfort zones to fully experience every possibility of a bird. 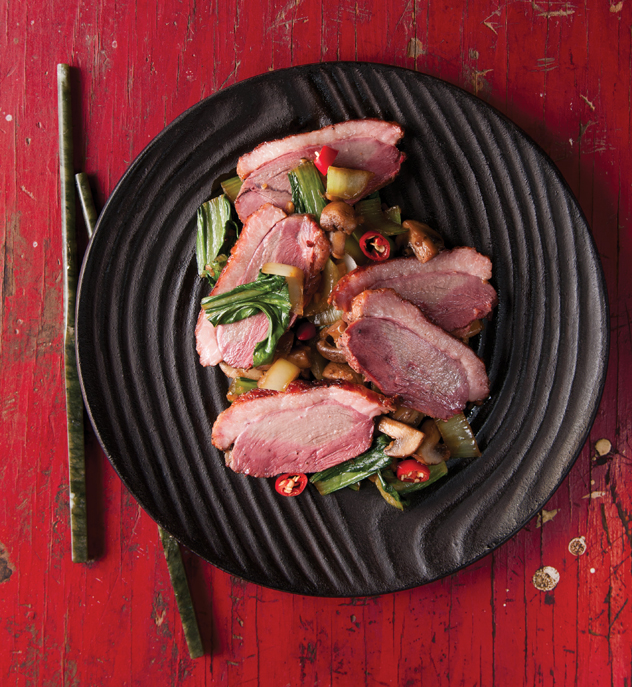 Shaw, 42, wasn’t always so obsessed with duck, though he was an easy convert after his first taste of wild mallard.

“I’ve been foraging and fishing since I could walk…but I didn’t do a lot of hunting until my 30s,” Shaw says. “I didn’t even meet a hunter until I was 24.”

Shaw worked in Minnesota as a reporter when a friend gave him his first mallards and pheasant to cook and eat. “I was amazed at how good they were,” he says.

Ultimately, that began his journey for good food.

“When you’re fishing or foraging you perceive nature in a different way,” Shaw says of what appealed to him when he decided to continue this lifestyle. “You’re hyper aware of the elements, the current and the water, or the wind.”

Hunting, he adds, “makes you feel more alive, but it’s not about pulling the trigger, it’s about the process.”
For Heyser, just experiencing this process with Shaw changed her life.

“The tipping point, what got me to start hunting, was ducks,” she says. “Hank had started hunting them obsessively, and two things happened: One, he would be gone all day on weekends, and I was getting lonely. And two, the ducks he brought home and cooked were insanely delicious, and if I wanted more of them in the house, I would need to get a gun and go out with him.

“Now I can’t imagine life without hunting; I am never happier than when I’m out in the field with a gun. Even if I don’t get anything, that sense of possibility—the realization that you might get lucky and bring home something for dinner—is completely addictive.” 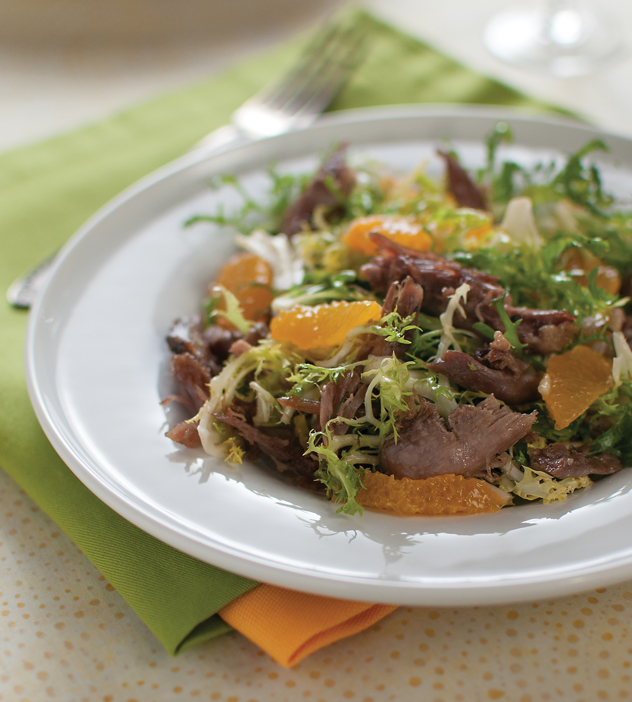 Shaw mentions in Duck, Duck, Goose that his most memorable meal to date is still an obese gadwall shot by Heyser just in time for Christmas dinner. A gadwall, as noted in the book, is a small brown duck Shaw calls “the duck lover’s bird,” but only when it feasts on grain and rice. That’s another thing you’ll learn from him: what an animal eats; its age; and where it flies, walks or waddles all matter in that making of a perfect meal.

Heyser went from being timid about cooking what she killed to “breaking down birds, cleaning gizzards, braising legs and searing duck breasts pretty fearlessly,” she says.

All of these techniques are photographed to assist cooks in the kitchen. Shaw also offers videos and tips on his blog to accompany the thousands of recipes that range from homemade spaetzle to braised squirrel. Something for everyone.

The menu at Mulvaney’s, where Shaw will be cooking a sold-out feast for enthusiasts on the book tour on Dec. 2, is not yet public; but it will focus on the book’s recipes. Several high-profile chefs have also cooked from the book during the tour, and the crowds are growing.

“The typical crowd is 60 to 70 percent home cooks and 30 to 40 percent hunters, which is what I envisioned for this tour,” Shaw notes. “Two years ago when I toured with my first book, a crowd was about 30 people. Now it’s 75 to 100. We sold out at Mulvaney’s a month early. It’s kind of blown me away, especially going someplace you’ve never been like Lexington, Ky., and receiving a warm welcome.”

One of the highlights of the tour occurred in New York City, where chef Anita Lo of renowned Annisa Restaurant said she would prepare three dishes from Shaw’s book.

“I’m not embarrassed to say she cooked them better than I did,” he laughs.

While being on tour for two full months, Shaw’s hunting days have waned. He has been able to go out a day here and there, and has learned to savor those days much more than when he would go out three to four times a week, he says.

Heyser has kept busy keeping the freezers filled and working at the nonprofit California Waterfowl. Shaw hopes to continue his passion after some rest.

Another book is not yet in the works, but he updates his blog regularly with timely recipes and suggestions or thoughts on the latest hunting controversies. He even includes entertaining stories of his past that lend themselves well to elevating a meal from a quick family dinner to a memorable, customizable event. If you get the book, check out examples of this in recipes for rarities like duck fat hollandaise or duck bulgogi—an adaptation of his mother’s adaptation after she tried the authentic version at the home of a Korean War veteran in the ‘60s.

To catch Shaw in action, check out his cooking demonstration at the Sacramento Natural Foods Co-op December 17, 2013 or check his website honest-food.net for upcoming book tour events.