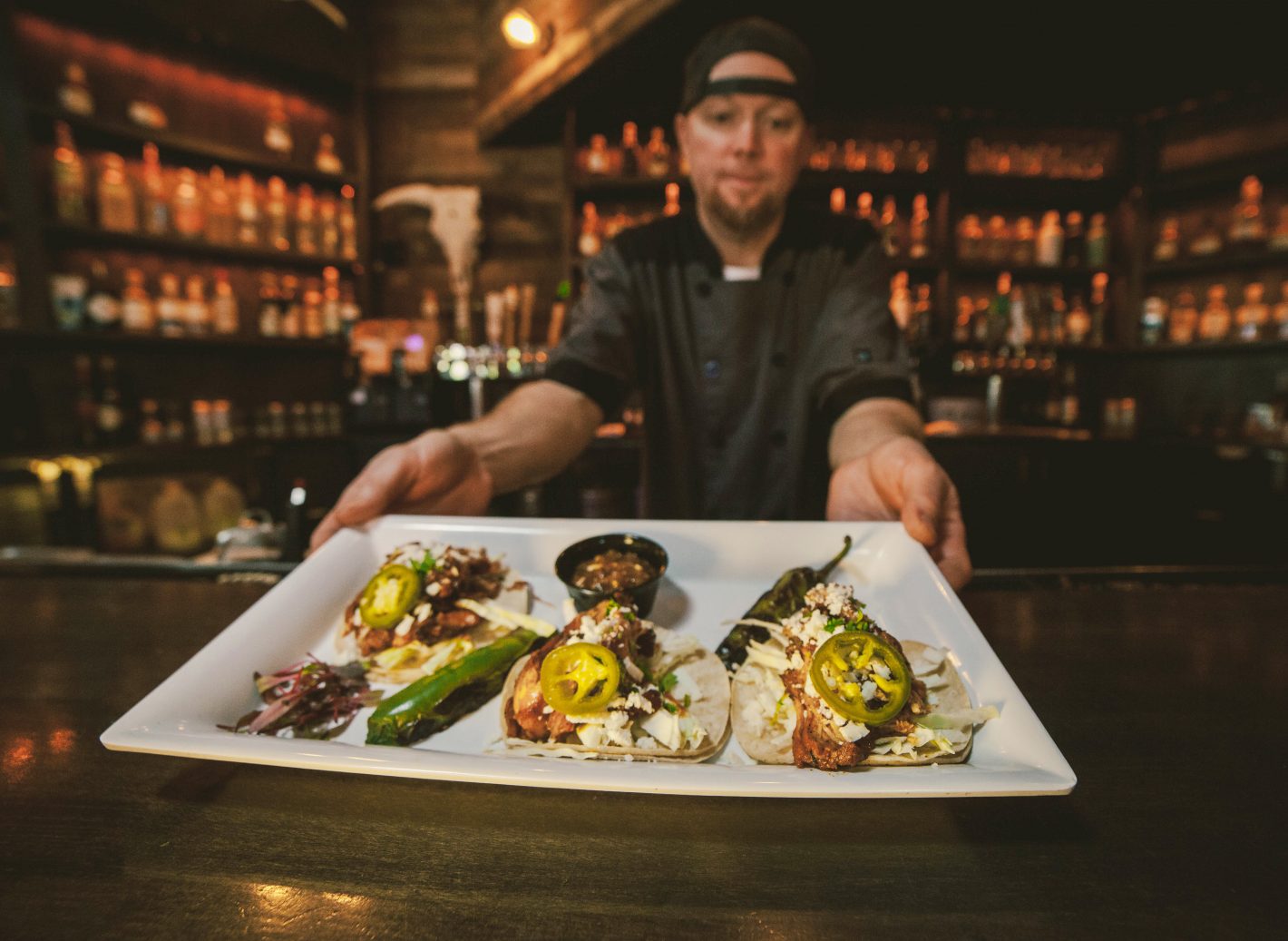 The persevering, rugged spirit of the Wild West is well-summarized in the alliterative phrase, “Come hell or highwater.” In non-cowboy terms, it means, “despite any obstacle.” And in that spirit, says DJ Rogers of his recently opened restaurant and bar Highwater, in a rare straight-shooting answer to a goddamn question, “Though the trials many and tribulations toilsome; come hell or highwater, it was to be.”

Mick Stevenson and Rogers, both veteran local musicians and owners of Dad’s Sandwiches, laid claim to a golden opportunity in late 2015 when they purchased Pour House on Q Street from Trevor Shults, the enterprising creator of a laundry list of local bars and restaurants in the Sacramento area. Biding their time, and partnering with Justin Isaacks, Ben Dewey, Matt Hagstrom and Isaac Fratini, they continued operating the establishment as Pour House until mid-August, when they launched the new concept, Highwater, which better fit the space.

I mean, it was kind of off having a vape lounge/cocktail bar in a train trackside saloon smack dab in the middle of a historically Old West city. Why not embrace the cowboy theme and run with it? But rather than Gold Rush western, Highwater’s inspiration is decidedly Albuquerque western. Evidence of their ties to rock ‘n’ roll can be found throughout, too. The brick interior is gussied up with trippy murals by local artists Shaun Burner and Dan Osterhoff. 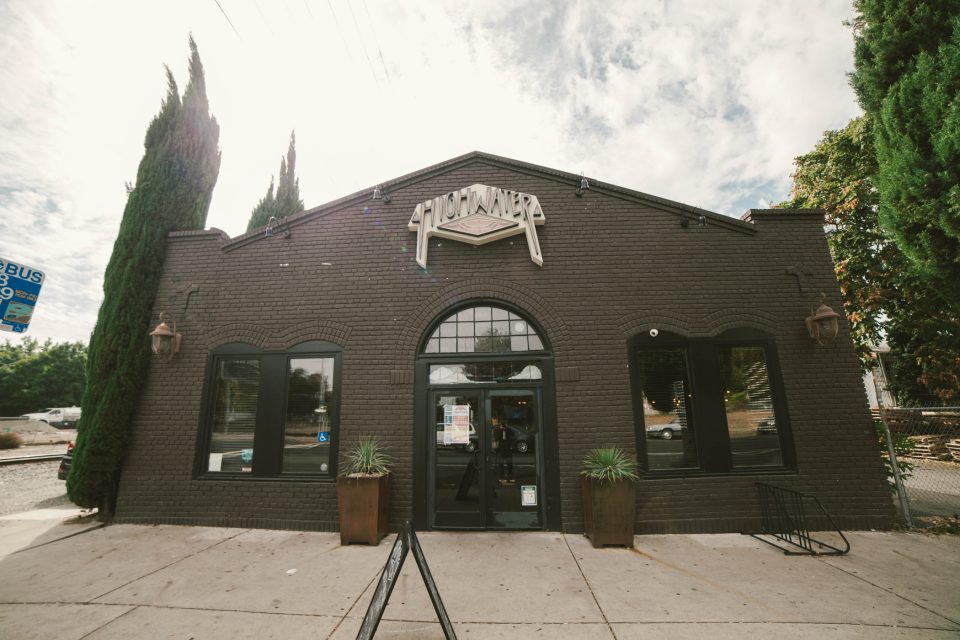 “I asked [them] if they had ever seen the movie Holy Mountain. They both said yes, which was a shock because I know they don’t do drugs. A few cans of paint later, and our customers have traveled to the desert with us,” explains Rogers.

When I asked him how they think Highwater stands out in a pretty crowded restaurant and bar scene, Rogers accurately described the Highwater difference: “Promising up-and-coming UFC prospects are less likely to slap the Monster Energy with vodka out of both your girlfriends’ hands here.”

But in all seriousness, Stevenson lived in Albuquerque prior to planting his flag in California, and Rogers expounds, “I had also spent a lot of time in New Mexico. Since I met Mick, we had always talked about doing a menu like this. We weren’t really setting out to be unique, just to put out the best food we knew we could. Pairing drinks with the menu is where our head bartender came in; because of the nature of the food, he ended up going with a lot of mezcals and tequilas—as it turns out they make for incredible cocktails.”

Highwater serves up lunch and dinner seven days a week until 10 p.m., and brunch on Saturdays and Sundays from 9 a.m.–2 p.m. Happy hour is daily from 3–7 p.m., and they’ve stuck with the train shots from the Pour House and Whiskey Wild days—when a train goes by, house whiskey shots are two bucks. Rotating drafts feature a mixture of local brews and Mexican imports, and the back bar is well-stocked with a curated selection of artisanal scotches, bourbons, tequilas, mezcals and other high-end liquors. 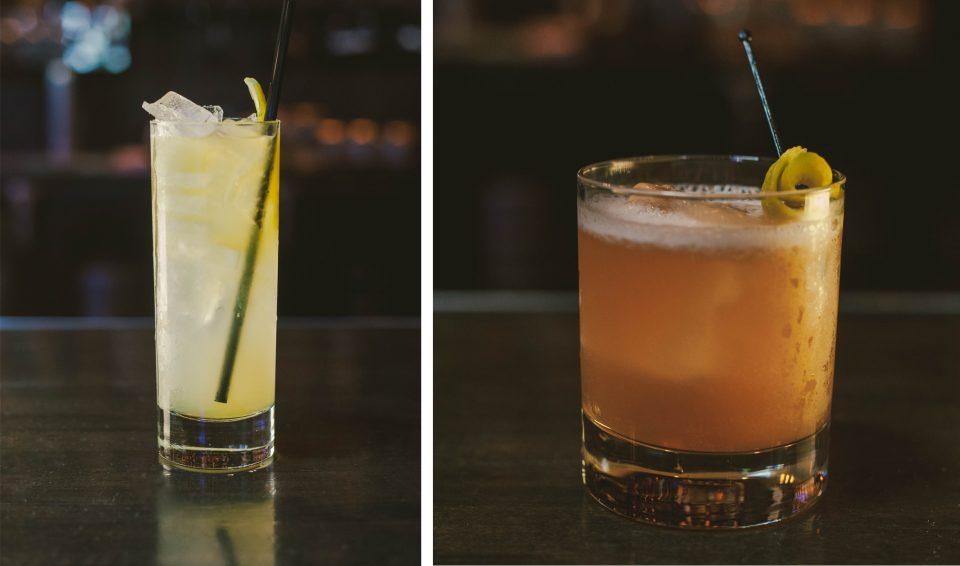 First, we ordered up a Peach Rose from our trusty bar dog. This bourbon-based drink was poured with Four Roses, lemon, ginger, simple syrup, peach liqueur and angostura bitters, and garnished with a lemon peel and whiskey stone ice cube. Drinkable, smooth and carefully striking a balance between sweet, boozy and bitter, the Peach Rose had a frothy, creamy texture, while merely hinting at peach and citrus.

The Pinto is Highwater’s answer to the current beer cocktail trend. Made with Botanist gin, St. Elder, simple syrup, lemon, grapefruit and Track 7 IPA, the Pinto tastes like a Fresca (that grapefruit soda that was popularized in the ‘90s). It was refreshing, bitter, citrusy, light and crisp. 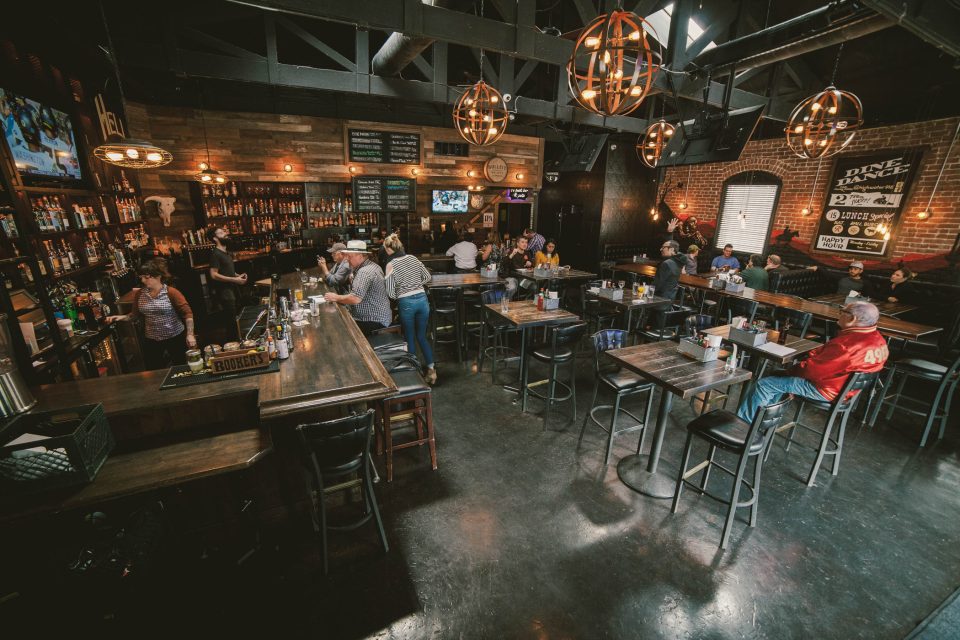 Highwater’s Bloody Mary is the self-same Preservation and Co. recipe that Pour House mixed—no need to throw the baby out with the bathwater. This award-winning hair of the dog cures hangovers with vodka, obviously, and Sacramento-based Preservation and Co.’s Bloody Mary Mix, sriracha salt and pickled olive, green bean and pearl onion garnishes. Note that it’s available during brunch only, upon request.

Time to eat. Stevenson busily procured one plate after another for the Submerge team to try, and upon delivery, gave us the rundown of each awesome dish we were to try. The salmon cake Benedict, a brunch item, arrived first. Made just like a crab cake, the savory, breaded salmon cakes were seared to a crisp on the outside, topped with poached eggs and a housemade hollandaise, and garnished with microgreens. The side of Deli Lama’s Papas are Highwater’s delicious version of breakfast potatoes. 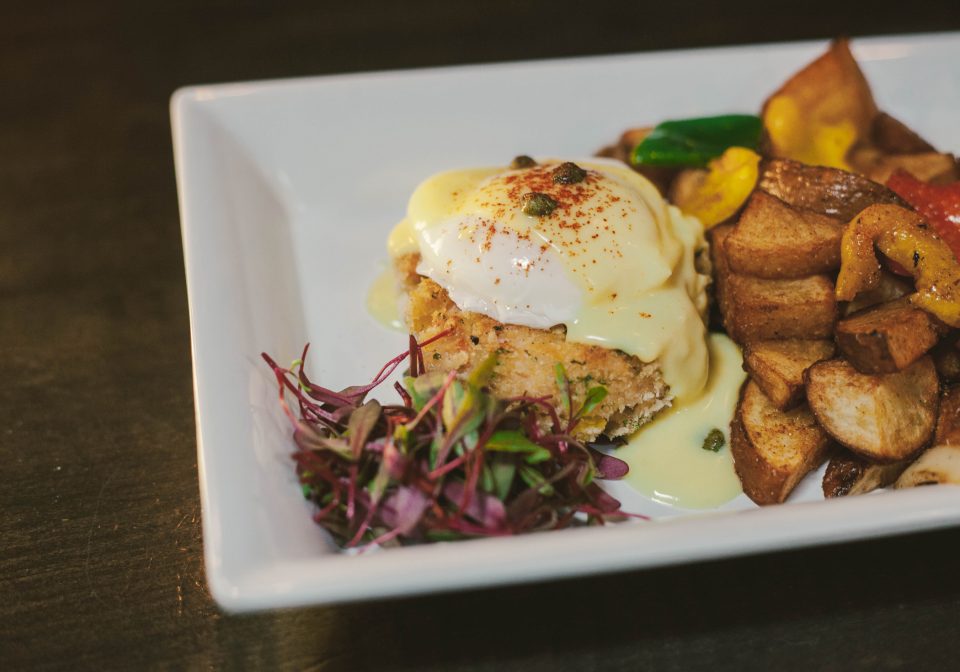 Vegans! The stuffed portabella tastes almost as good a juicy steak and is 100 percent veg. Marinated portabellas are stuffed with a not-overcooked, marinated mix of grilled carrots, summer squash and zucchini, and drizzled with a balsamic reduction. Dirty rice comes on the side.

The chicken adobo street tacos were up next. Doubled up corn tortillas are stuffed to the max with cabbage, chicken adobo, housemade salsa, roasted jalapeño, cilantro and Cotija cheese. I suggest removing the bottom tortilla and eating the taco over said tortilla so when hella stuff falls out, you have another taco. Stevenson plans to add a pork taco to the menu soon. 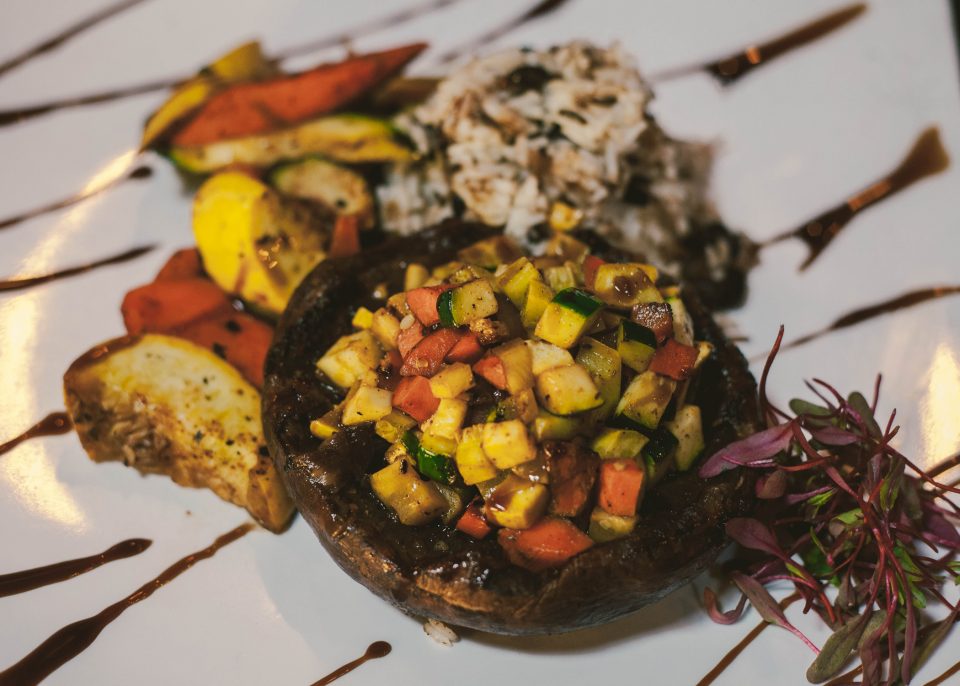 The rebrand, new menu and events (see below) have been a hit with locals thus far, and it would seem that neither hell, nor highwater, have come to stand in the way. After more than a decade of working together, be it making music, throwing rad events or running businesses, you’d think Stevenson and Rogers would get sick of each other sometimes, but they seem to be having a blast in all of their partnerships, with no signs of slowing down. That’s probably due to a shared attitudinal working dynamic, summarized by Rogers with this metaphor: “When there’s only one slice of pizza left in the box, we leave it be.” 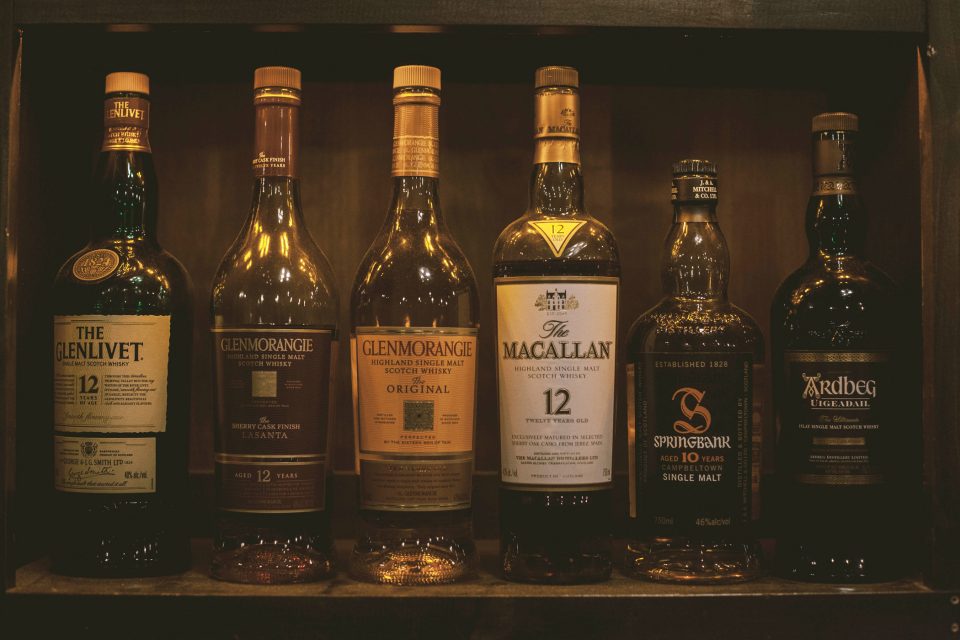 We asked Rogers about which events have proven the most popular so far, to which he replied, “The Midtown Spring Formal comes to mind. Who doesn’t like to dress up? I’ll pin a corsage on anything that moves.” But their weekly events keep bringing people in, too. Keep on eye on their events calendar, it might just upgrade your social life.

Here are some of the highlights:

TOTAL RECALL & FUNK IN THE TRUNK
Every first Friday, Total Recall brings the heat with your favorite ‘90s hits.

HEAVY MONDAYS
Mondays suck, so commiserate with some metal together at the back bar.

TUSSLE
Every Tuesday, get down at this weekly trip hop and soul dance night.

ONLY THE GOOD STUFF
Every Wednesday, that good good hip hop and R&B dance party gets you past the mid-week slump.

MOVEMENT
A monthly party featuring all vinyl sets of synth pop, ‘80s and new wave, spun by Eric and Juan.

Highwater is located at 1910 Q St., Sacramento. For more info, go to Highwatersacramento.com.