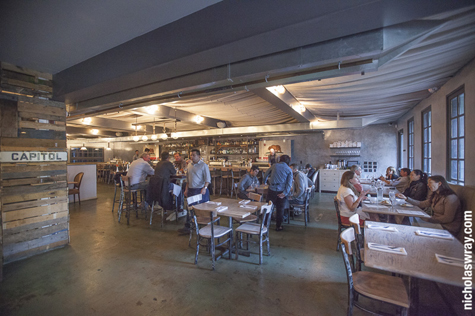 In 2003 Kimio Bazett and Jon Modrow bought the Golden Bear, settled in Sacramento and committed to making this town a better place. Now they’ve embarked upon a new enterprise: Hook and Ladder Manufacturing Company, a restaurant and bar focused on highly refined eats and attentively detailed drinks, occupying the arched tin hull of what used to be Hangar 17. Yet, while the exterior might be the same, the interior is anything but.

What used to be a dark-ceilinged, neon blue clash of grays and polished, metallic tables, has become a warm, light, playful take on the current repurposed industrial loft aesthetic. The entrance strikes one with votive candles placed neatly around a detailed yet happenstance slat wood wall display behind the host stand. The bar is stocked to the ceiling with liquor, and at its center sits the yeti draft, an upside down tap system that cools the brewed beverages as they travel down the line, gathering a layer of condensed ice on the exterior of the mount. 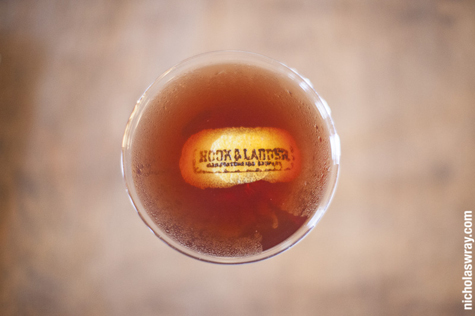 Bar manager Chris Tucker took a few minutes to explain a few of the finer points of their intriguing bar setup, which includes the yeti system, the keg wine pressurized with nitrogen and the cocktails on tap. Wait, what?

Tucker, who cut his teeth in this industry at America Live back in the day, detailed how they craft these specialty cocktails, mix them in huge batches, have them pressurized and then pour them over ice to quickly chill before they’re served to thirsty customers. It’s an intriguing process that we had to try. The four options included a Jameson Stinger, a Negroni with a nice anise finish, a Norse by Northwest with Aquavit from Portland and a Jerry Thomas Manhattan. 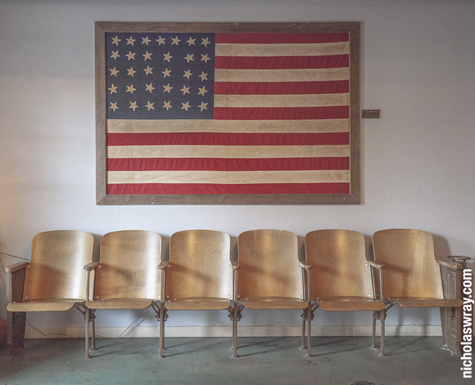 Of the four, the first and the last impressed us the most. Like much of the dÃ©cor of Hook and Ladder, these cocktails are both old and new. The Jameson Stinger is a play on a classic libation with a nice balance of mint and Jameson that came off both refreshingly simple and flavorful in texture. The Jerry Thomas Manhattan differs from the traditional Manhattan. It’s crafted with Rye whiskey and Luxardo, an Italian maraschino cherry liquor, vermouth and bitters, garnished with a lemon peel that has the Hook and Ladder logo branded upon it. I also really enjoyed the Templeton rye and house made ginger beer, which had a sweet, light kick.

Oh yeah, and there are eats. 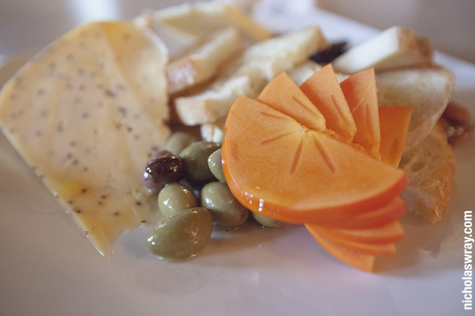 We had two meals at Hook and Ladder: one lunch, one dinner. Between the two meals we sampled multiple starters, a salad, a pizza, a sandwich, a cheese plate and an entrÃ©e. The starters were impressive by themselves, revealing an attention to quality ingredients and presentation. The three-cheese plate consisted of an Italian Tallegio, a brie-like texture that spread smoothly on the toasted bread it was served with; a Dutch Beemster with mustard seeds; and a Californian Carmody. Each paired well with the almonds, olives, persimmons and house dried fruit plated alongside it. The smoked eggplant baba ganoush topped with goat cheese had a rich texture that complimented the garlic-roasted flatbread. The seasoning of this pairing had a peppery kick that made me come back for more. The trio of sausages, which included a spicy chicken chorizo and a lamb link, served with mustard and two different chutneys, surprised with their quality. The sausages are all made in house, ground and stuffed, and then they’re cooked in beer before being oven-finished for service. 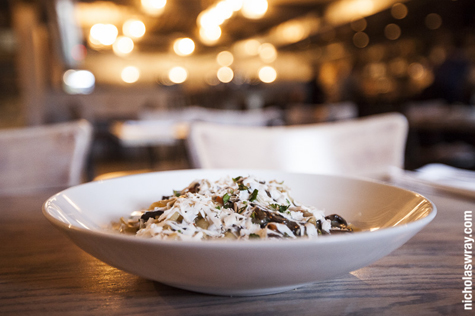 However, despite all these smaller plates, the highlights of our lunch experience were the two large plates: the sweet potato pappardelle with mixed mushroom ragÃ¹, shaved sheep’s milk cheese; and the barbecue chicken sandwich served with potato chips inside–Liz Lemon style–and a side of fries or salad. We opted for the fries and were happy about the decision. We split the sandwich and it disappeared immediately. The house barbecue and slaw were nicely chosen for this dish. The barbecue sauce had a sweet taste that was aided by the salty potato chips and the moist fried breast and thigh meat. The Bella Bru steak roll finished the entire piece. 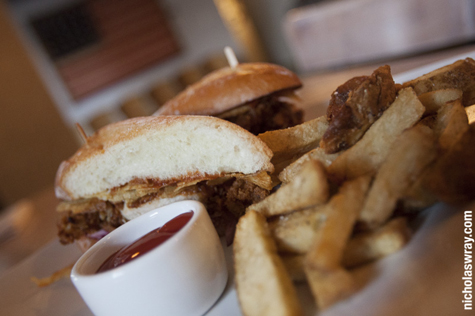 All of Hook and Ladder’s pastas are made in house, and the sweet potato pappardelle did not disappoint. There are two types of pasta noodle dishes that I tend to find within our local cuisine. The first is a noodle type dish with a light oil toss and varied seasonal flavors, and the second focuses on the pasta as a base for a rich, hearty sauce with a depth of taste. The sweet potato papparadelle walked a nice line between the two. The mushroom ragÃ¹ and sheep’s milk cheese brought a soft and thick baseline, but each bite felt light on the tongue. Over the course of our meal, as I sampled other items, this was the dish I kept repeatedly coming back to. 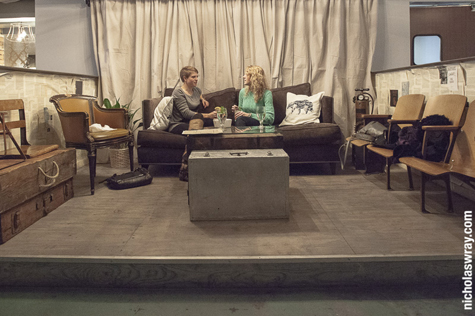 During lunch the clientele was relaxed, small groups, with others grabbing a quick bite at the bar. But dinner seemed like a livelier group. Larger parties laughed aloud in the warm yellow light, and the room felt like it was alive with the murmur of multiple conversations. It was, after all, Friday night, and Hook and Ladder was apparently doing well; we had to sit outside because by 6 p.m. table service inside was booked up for the night.

Like the interior, the outside impressed. Repurposed tabletops fit together–with heat lamps for the winter months–under a high awning, and warehouse flats lined the previous fencing, supporting sheet-metal gutters with freshly planted succulents and ferns inside. 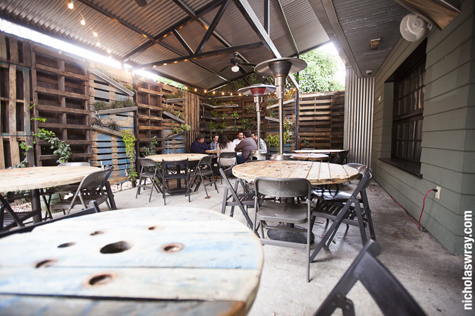 We started with the Yukon gold potato, crimini mushroom, rosemary and crescenza pizza, based on the waiter’s recommendation. Hook and Ladder’s head chef is Brian Mizner, who held down Hot Italian when it first opened, and this made sense when the pizza arrived. The dough is similar to Hot Italian’s, but the pizza’s ingredients make it unique to Hook and Ladder. The potatoes were seasoned and soft to go along with the light dusting of crescenza cheese. The mushrooms and rosemary rounded out the taste, and we were quite happy with two slices each as an appetizer of sorts and saving leftovers for the next day.

The pancetta and poached duck egg salad had a variety of texture and balance. The mix of frisÃ©e, radicchio and greens allowed a hint of bitter and woody to mix with the salty punch of the small pieces of pancetta. The duck egg and vinaigrette dressing gave more depth, and even a hint of sweetness, to this salad.

Lastly, we ordered the bacon-wrapped pork tenderloin medium rare to finish our meal. This entrÃ©e is served on a base of braised nettles, cut into medallions, and topped with Gorgonzola gnocchi. The tenderloin itself was moist and had a light flavor supplemented by the bacon. There was a bit of sweetness from a bit of sautÃ©, and when followed with the Gorgonzola gnocchi, this plate was quite satisfying. The braised nettles provided a mild contrast to these rich flavors with a crunchy, slight bitter bite. 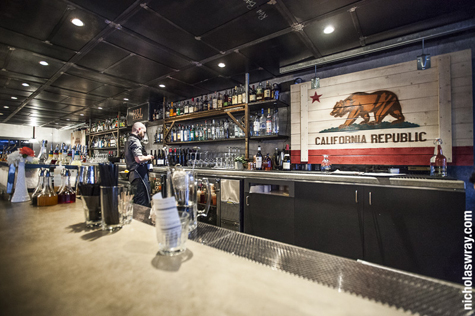 Ultimately, Hook and Ladder is a fine dining establishment that I’m sure will find success. While it’s only been open for seven weeks, it’s obvious that this restaurant and bar will only get better with time. During the summer, it’s going to be hard to find a seat most nights of the week. For those interested in just a drink or two, there’s ample seating at the long bar covering the west side of the building, a waiting area with tables made from old school board games such as Sorry where couples can enjoy a cocktail, perhaps before dinner.

It’s clear that Bazett and Modrow have put a lot of thought into this enterprise. They’re looking to make Sacramento a better place, and it is, after all, worthy. Anyone visiting the Golden Bear over the last nine years and watching it change should see the logic in Hook and Ladder. Bazett and Modrow want to move from bar-restaurant to restaurant-bar. For those ready to shift gears a bit from those late night Bear experiences to a quality meal and the nuance of a consistent bar, Bazett and Modrow have one option to add to Sacramento’s restaurant list: Hook and Ladder Manufacturing Company. 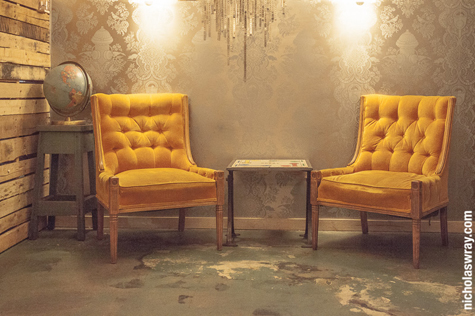