Sacramento has a new laid-back and mouthwatering place where happy hour dreams really do come true. Specialty cocktails, pint-sized brews, wings, wood-fired pizzas and fried goodies are only some of the options at Iron Horse Tavern. Being an unhappy and starving artist, I had a ripe $20 bill burning a hole in my pocket, so I decided that this had to be the place. Plus, I don’t think there’s anything better than drinking somewhere on a patio at 3 o’clock in the afternoon.

Wisely, the originators of Cafeteria 15L and Firestone Public House have exacted a classy yet casual establishment located at the railways of 15th and R for all my midday noshing needs. Their recent offering to the Midtown restaurant panorama is innovative in design. The tavern is steeped in historical hipness, with a model locomotive on display above the coppered bar, button-tufted booths and décor boasting the archetype of industrial engineering. Inside, the combo of hexagon tile and old wooden flooring almost looks speakeasy-esque.

A self-diagnosed claustrophobe, patio seating looked quite inviting—surrounded by hanging succulent baskets, giant candled lanterns and big community-style picnic tables. I had brought a tagalong that also opted for the outdoor experience. The soundtrack of old-school favorites like Ray Charles, Bill Withers and Etta James was outwardly calling my name from the open-aired terrace. Soul music always makes for a groovy experience while feasting.

With half-off appetizers and delicious pizzas, $1 off big beers, $2 off wines, $3 off specialty cocktails, and flat-out $4.50 well cocktails, needier happy hour goers (like myself) should be enticed to have their satieties met.

It was immediately clear that Chef Christian Palmos has created an amusing menu to incite much lip-smacking. But what’s a dude to order with a 20? Well, I did what any impulsive human being would do and ordered a bevy of the greasiest food possible. Upon delivery of said grub, I was surprised to see that the portions were large and in charge. 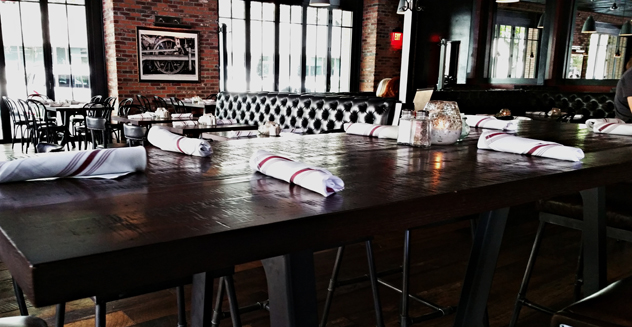 Knowing a thing or two about my own health trajectory, I ordered the hand-tossed margherita pizza, beer brined-chicken wings, and fried pickles and onions. Yet, lo and behold, this had already cost me slightly over $15, and my dining companion and I would need drinks. Maybe if I went alone, I could have achieved my goal. But there’s no fun in that. Mass consumption should be shared.

Sadly, the joint’s mac ‘n’ cheese bar—featuring the gauntlet of bacon and egg to jalapeño to lobster mac—was not included as part of their happy hour special, but that wasn’t going to stop me, either. I had a credit card that wasn’t maxed out, so I couldn’t resist requesting the Tavern Mac. In retrospect, Asian-style street tacos and a Bavarian pretzel were close runners-up. Juxtaposed were Loco Moco Burgers, Korean fried chicken and Hawaiian style ribeye steaks as entrée options. They sounded supremely delectable, to say the least, but I should probably get a day job if I want to live in the lap of luxury.

A medley of craft cocktails was available, in particular the trademarked Iron Lady, comprised of Charbay Blood Orange vodka, Pallini limoncello, Aperol, lemon juice and grapefruit peel. It quenched my lush cohort’s sweet tooth nicely. For the winos, Californian, French and Italian varietals by the glass are served in tumblers. And for beer drinkers and hell-raisers, there was a vast selection from Track 7 to Firestone, and old standbys like Blue Moon and Bud Light. I, of course, chose the Bud, because I’m poor and from the Midwest.

Iron Horse had a leniently fine-dining feel to it, made possible throughout by good ambience, great service and a genuine vintage vibe that’s true to Sacramento’s roots. The crowd was a mix of unpretentious city denizens who were as diverse as the food served there. The restaurant apparently doesn’t have a “type,” and very well-staffed with friendly faces, knowledgeable of the cuisine and libations. The servers easily convinced me that working on the railroad wasn’t so bad.

So I spent more than $20. I’m a creative-type with no self-control. You can do better than I did. Shakespeare once wrote, “Therefore, my lords, omit no happy hour,” and weekdays from 3–6 p.m. is worth a venture out to Iron Horse Tavern for that precept alone. It’s by and large a fitting addition to the ever-developing R Street scene in Midtown, set to bring in happy hour droves, brunch crowds and late-night urbanites. Owners of the enterprise most likely sleep well, knowing they’ve created yet another hotspot on the grid, and indeed have proven that the entire experience is much more than just drinks in the afternoon; it’s a lifestyle that you should probably start participating in. Go on, get happy!