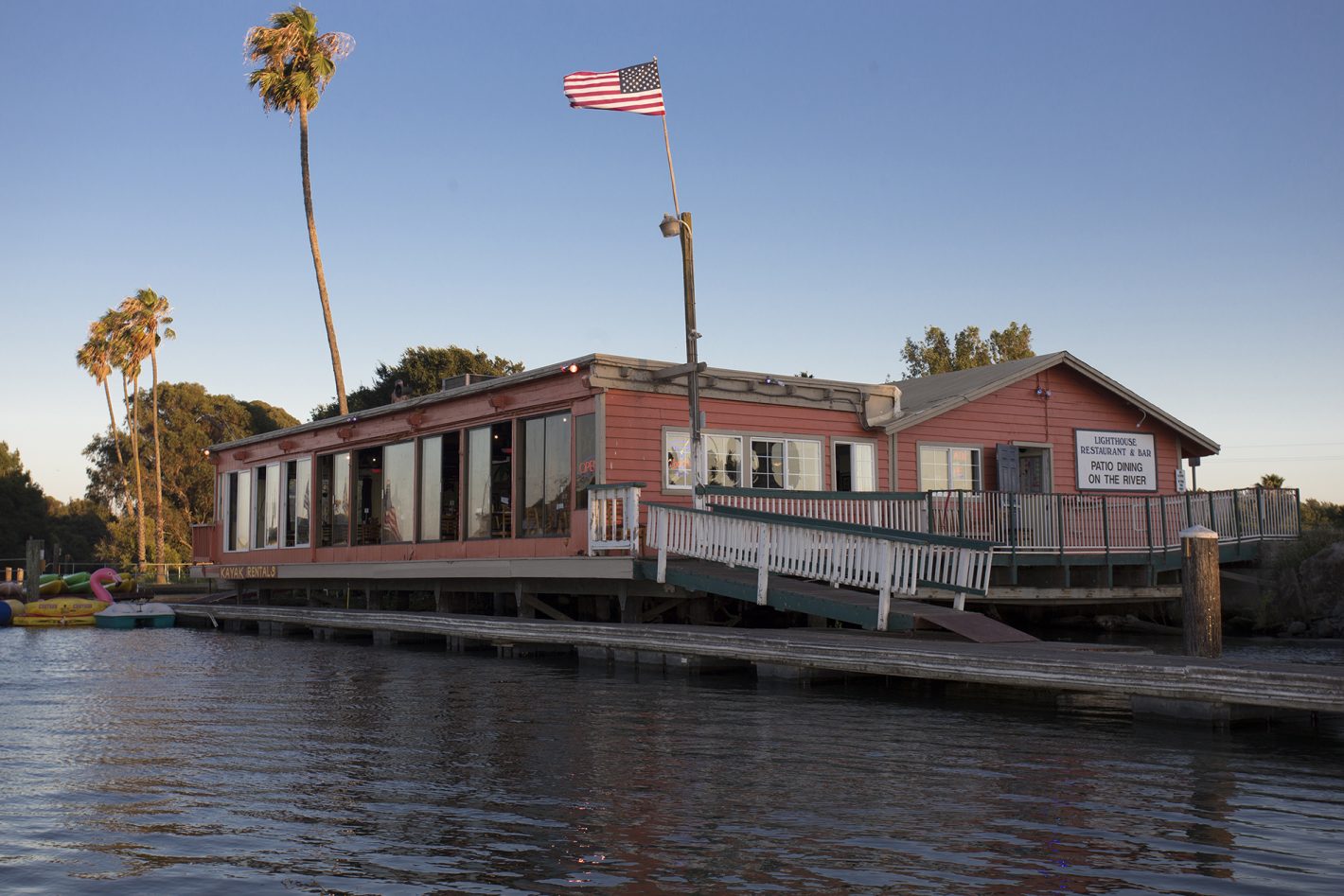 There are so many ways to unplug during the summers in Sacramento. From the endless opportunities to commune with nature—hiking through the breathtaking Sierra Nevada mountain range or camping in one of the many lush, verdant forests that encircle the valley instantly come to mind—to copious ways to engage with the exploding local creative culture at open-air markets, outdoor concerts and the bustling bar scene, the region is full of summertime gems.

And while the summer days are growing shorter as the fall season looms ahead, there is still plenty of time to tap into one of the region’s many hidden gems before the final sunset adorns the dusky skies.

The Lighthouse Bar and Grill, tucked away in the sleepy town of Isleton on the Delta Loop, is one of those rare jewels in the Sacramento Valley that provides the perfect excuse to trade in the hot and sweaty city for the laid-back cool that is the Sacramento-San Joaquin River Delta countryside.

Seriously, where else can you find a pirate hosting a karaoke night, your choice of waterslide or trampoline to act as the conduit for cooling off in the refreshing waters of the Sacramento River and a spot that dishes up both pub grub and boozy potions at a stupid-affordable price? Oh, and for the ultimate cool down, you can work on executing the perfect cannonball from the eatery’s rooftop into the river.

Less than an hour’s drive from downtown Sacramento, the tiki-inspired, rock ‘n’ roll saloon is a veritable toy box of good times for big kids. Perched right on the river, the Lighthouse boasts a full bar, boat parking, old-school arcade and board games, and a killer view of the river. The vibe is totally kick-back and their food offerings are legit. 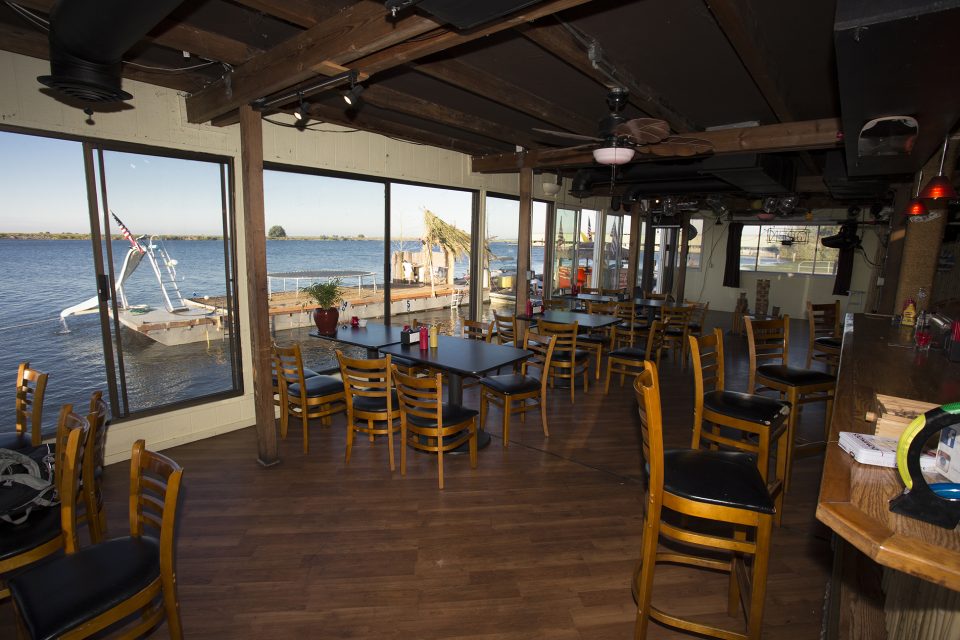 On a recent jaunt out to the Loop, highlights from the kitchen included abundant salads; the Lighthouse salad, a wellspring of fresh spring lettuce, adorned with thick slices of cucumber, tomato and onion with a generous sprinkling of sunflower seeds and garbanzo beans and the shrimp Louie, Louie—a riff on both 1963 The Kingsmen hit and the classic must-have for all crustacean lovers—is a cleaned-up version with crunchy greens and a lightened-up version of the heavy Thousand Island dressing that typically weighs down the shrimp in a gloppy mess. 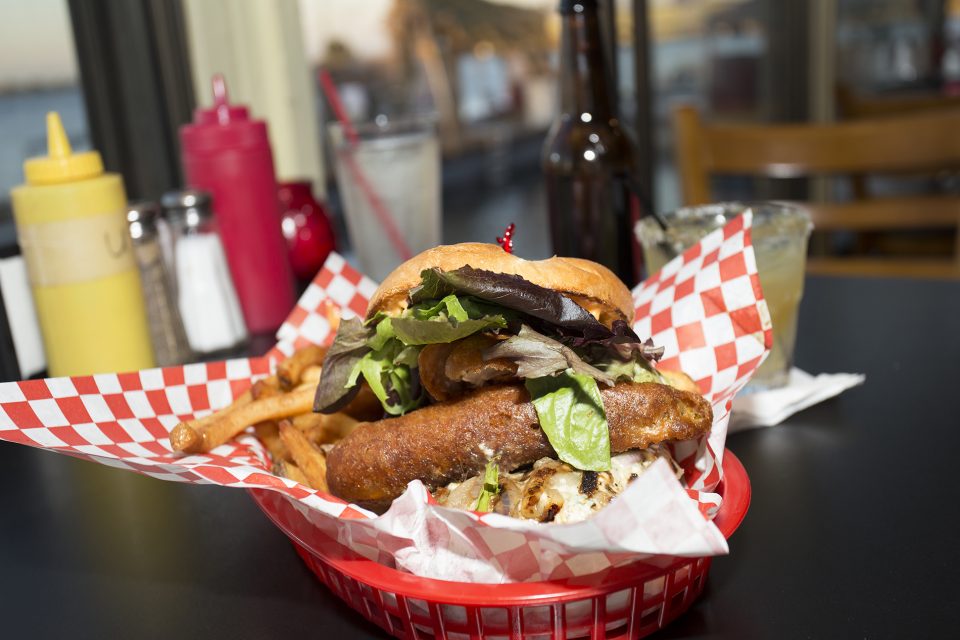 The Lighthouse burger also proved to be finger-licking worthy—caramelized onions and bleu cheese paired surprisingly well with the deep-fried pickle that came perched atop the beefy burger; the pickle surrounded by a light and crispy, tempura-level batter that enhanced the briny bite of the preserved vegetable.

Another surprise on the menu was the tavern’s take on the ubiquitous fried mushroom appetizer, a true staple in pub fare. The gargantuan fungi were surrounded again by the same delicate and crispy beer batter that enveloped the pickle on the Lighthouse burger but was accompanied by a tangy and mildly spicy lemon aioli. 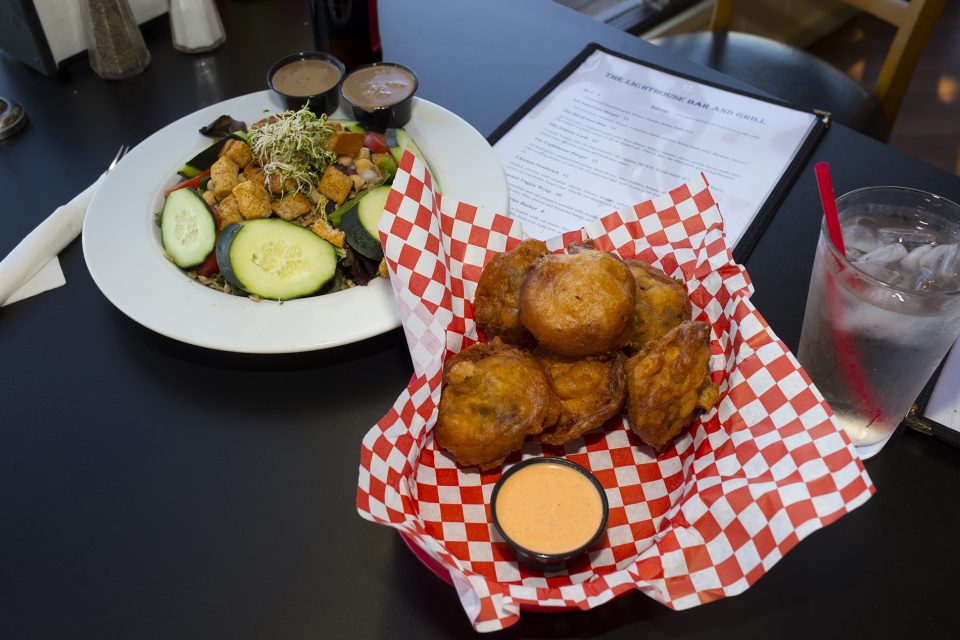 For those unfamiliar with the area, the California Delta is comprised of 57 islands and serves as the fertile cradle of our local agricultural scene. Oenophiles flock to the region to sip from the fount of Dionysus at wineries like Bogle Vineyards and Scribner Bend while acres upon acres of farmland plays home to pear orchards, olive groves, grape vineyards and everything else in between. Located between Sacramento and Stockton, the small, quaint riverside communities that spring up along the labyrinthine river roads harken back to the steamboat and paddleboat days with their dilapidated charm.

Ask anyone who lives in the Delta and they’ll tell you, its rich history is as sordid as it is fabulous. Legend has it that mobsters and celebrities alike landed on the shores of the Delta to engage in both nefarious and opulent activities. Once the playground of Sacramento’s high society in the 1920s and ’30s—Louis J. Meyers and his wife Audrey, the daughter of David Lubin of Weinstock Lubin Department Store, built the Grand Island Mansion in 1917 and played host to such luminaries as President Franklin D. Roosevelt and actress Greta Garbo, while up the river a few miles, the Delta also served as the centerpiece of Sacramento’s bootlegging industry during Prohibition at the historic Ryde Hotel.

While the Lighthouse Bar and Grill is gearing up for its one-year anniversary celebration, the building has been a mainstay in the Delta since the 1960s, according to its current owner, Mateo Gorlione. After having seen the business change ownership several times, the former engineer turned proud barkeep decided to take on the challenge of reinvigorating what he dubbed at the time a “magical shithole.” 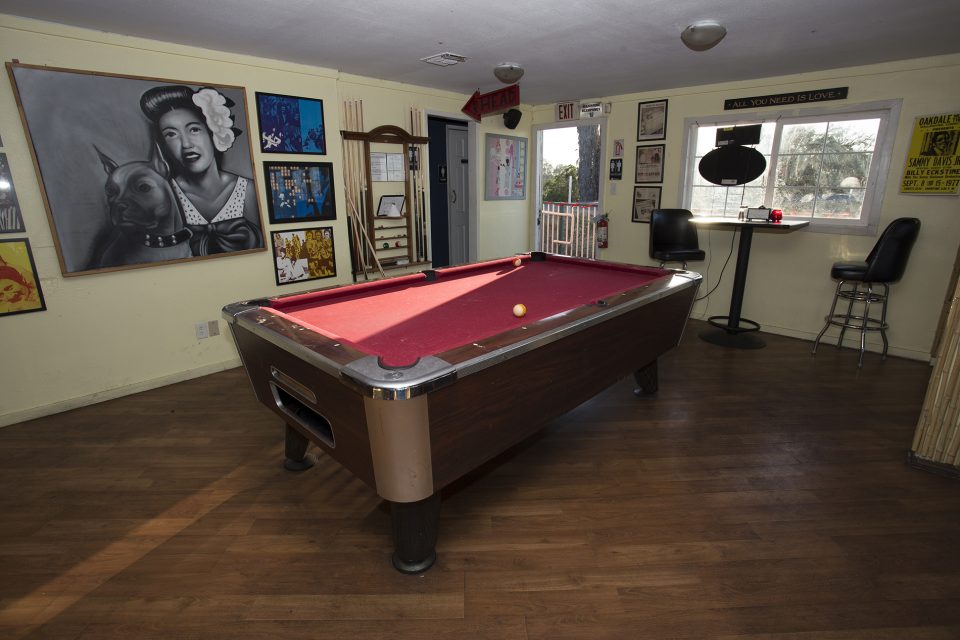 “The Lighthouse has been here since 1963, or some shit like that, so it has pull,” Gorlione explains. “But a lot of the [previous] owners [hadn’t realized] its potential.

A lot of people who came here thought they could just open up a shitty river rat bar and do nothing and make a bunch of money and that’s not what it’s about.”

And trust me, the place does have pull. According to Gorlione, a recent ’80s-themed party brought out more than 1,000 to the Delta’s shores—both local and far-flung partygoers looking for a reason to dust off their jelly sandals, Hammer pants and Miami Vice pastel gear.

For Gorlione, breathing new life into the Lighthouse was a homecoming of sorts—his muse has its origins in his youth when he and a few friends were inspired by the bootlegging days of yore.

“When I was 17 years old, I had a speakeasy—I rented a garage and we sold liquor to … all of my high school friends,” Gorlione explains with a wink and a nod. “I ran this thing for about two years and we never got busted, we made a shit ton of money and it was the happiest time I ever had in my life.”

It was only when the parents of his youthful patrons came knocking—not to shutter Gorlione’s side hustle, but to belly up to the bar themselves—that he was forced to shut down the speakeasy. 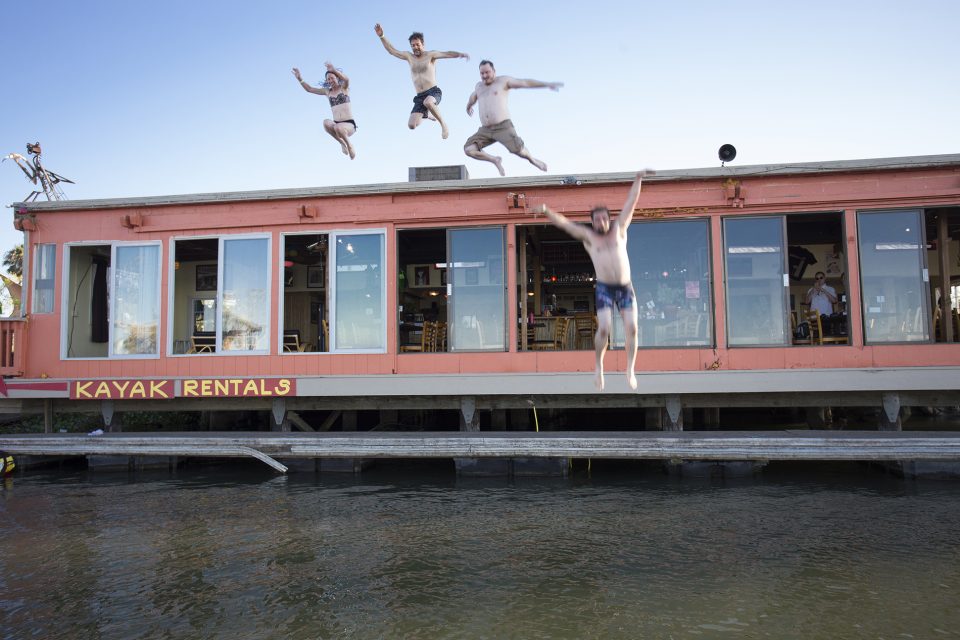 “I had this great thing going for about two years … and it was the happiest I’ve ever been,” Gorlione beams. “Since then, throughout my life, I’ve worked some shitty ass jobs for people I didn’t want to, chased money for way too fucking long. One day I just stopped and said, ‘When was the last time you were really happy?’ You know what, it was when I was in that stupid little speakeasy that I made when I was 17, serving drinks to my friends for basically no fucking money. We blasted vinyl all the time, played old-school ‘60s music and hung out having drinks. And that’s what I’m doing here, this is my garage.”

While many flock to The Lighthouse to work on mastering the perfect rooftop plunge or to enjoy the free live music just about every Saturday night, Gorlione says that it’s pirate, nay, “Pyrate” karaoke every Thursday night that really rocks the house.

“Pyrate karaoke, it’s fucking amazing. It’s packed as fuck, it’s lit as fuck,” Gorlione explains. “One of my best friends, Pyrate Matthew, runs a karaoke show all around the Delta, but this is his favorite spot. This guy rocks a show like you would not believe. Come on a Thursday, you just have to see it, it’s fucking great.”

As preparations continue for the tavern’s anniversary party on Sept. 9, 2017, aptly dubbed The Delta Druncathlon or the Beer Olympics, Gorlione says he and his crew are pulling out all the stops:

“We’re going to do a drunk decathlon. There will be judges sworn in, there will be teams, there will be people swimming and drinking and doing all kinds of shit, like 1987. We party like it’s 20 years ago. There’s no internet here. People don’t use phones, people actually talk to each other. There are no TVs here; there’s not one TV here. It’s not a fucking sports bar. People love each other here, it’s great.”

The Lighthouse Bar and Grill is located at 151 Brannan Island Road in Isleton. Find out more at Facebook.com/lighthousedeltaloop