Fun Facts Before You Go

In a creamy ice cream, a stiff margarita or simply grilled with salt and pepper, asparagus is one springtime vegetable that is enjoyed and savored in myriad forms throughout the San Joaquin Valley and the world. Every spring, the Asparagus Festival in Stockton, Calif., dishes up massive quantities of the fibrous and potassium-filled stalk. On April 25 to 27, be entertained by ’80s alternative rock band Soul Asylum, or get funky with the guys from War before witnessing a Chopped-inspired chef cook-off located in the Civic Auditorium area. Visit white tents set up in Asparagus Alley to brave scoops of asparagus ice cream, pastas and more.

Now in its 29th year, the festival boasts 36,000 deep-fried asparagus servings, 10,100 scoops of green ice cream, 3,500 sandwiches, 3,400 pasta plates and 2,300 burritos. The grand total: 56,400 helpings of asparagus are consumed over the festival’s three-day period. Not to mention, $25,000 worth of perishables are donated to the Emergency Food Bank and Gospel Rescue Mission. As the festival approaches, we wanted to learn a bit more about the abundant stalky veggie. In the following interviews, Submerge magazine asks culinary experts, dietitians and festival organizers about tips, tricks and fun-facts behind the versatile veggie—and yes, we even asked what’s up with asparagus pee.

That sulfuric odor and yellowish-green hue are two characteristics of asparagus consumption a majority of fans are all too familiar with. Luckily, Submerge turns to registered dietician Cathy Carmichael of the Sacramento Native American Health Center (2020 J Street) to ask the age-old question.

Why, oh why, does asparagus pee smell so pungent?
CC: It’s actually a byproduct of the amino acid, asparagine. When it breaks down in your body, it produces a byproduct that ends up in the toilet from your urine and you can smell it.

Gross.
CC: All amino acids are found in protein foods. If you think about the smell, like with eggs. While you’re hard-boiling eggs, or steaming artichokes, they have a very unique smell. All of those are the byproduct of amino acids that are changing their formation, whether they’re changing in your body or changing when cooking. [Asparagine] was one of the first amino acids to be isolated by scientists in the 1800s. It’s also found in many other foods.

What are some nutritional benefits of asparagus?
CC: Asparagus is high in potassium, vitamin A, folate and fiber. I would say a cup of asparagus is about 40 calories. It’s a low-calorie vegetable that is very nutrient-dense. As a dietitian, asparagus is such a great vegetable because it’s handheld and that’s great for kids; you can cook it in the microwave, you can steam it, it’s very versatile. It adds great color. It’s a terrific vegetable. We are very lucky in the state of California to have a lot of it, if we have enough water to grow it right. 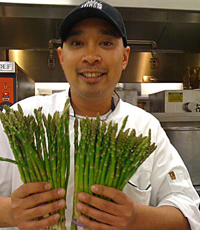 Drian Perez is the chef-in-charge at Skyline Restaurant in the Sleep Train Arena. With more than 15 years of experience professionally dishing up meals, Perez and his team of culinary artists serve anywhere from 3,500 to 4,000 guests on game nights alone. With five games left in the NBA season, Perez looks to fresh asparagus for inspiration in the kitchen.

What is an asparagus faux pas?
DP: Never boil asparagus. When you boil asparagus, it washes away all the good stuff that you don’t end up eating. It’s actually best to just grill it right out. The best way to do it for me is to cook it with salt, pepper and olive oil on the grill.

How is the Sleep Train team dishin’ out asparagus?
DP: Right now, we’re doing a cream of asparagus soup. We also like to do roasted asparagus served with a balsamic reduction as a salad item. We also like to use asparagus for our pastas, like our pasta alfredo with asparagus and mushrooms. Seasonal vegetable is what’s good about living in Northern California. We can get asparagus right away. Especially, with the whole farm to fork push that’s going on everywhere, asparagus is definitely a part of that.

Did you enjoy the vegetable as a kid?
DP: I wish that kids could eat a lot more of it in schools. Going to school, we never had a taste for asparagus in lunch programs and that is something that I would like to see incorporated in school menus. 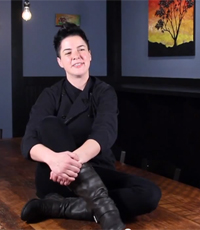 Executive chef and owner of Blackbird Kitchen and Beer Gallery, Carina Lampkin may be a stranger when it comes to the Asparagus Festival, but she is definitely familiar with the vegetable. Lampkin features the perennial veggie on Blackbird’s latest menu alongside a nice portion of wild king salmon. She also plans to incorporate asparagus tips and when it’s their turn, other fern veggies and artichokes with beef tartar rounds. Look for chef’s take on springtime goodies throughout their respective seasons all year round.

How do you prefer asparagus?
CL: My favorite way to eat anything is simply with butter and salt. Done. Give me a grill. Give me some butter. Give me some salt. Call it good.

Tell me about Blackbird’s asparagus dish.
CL: Blackbird is hyper-seasonal. So, as soon as something pops out of the ground, we like to cut it and plate it. I’m doing a seared wild king salmon dish with a bacon and potato hash, [and] poached egg with asparagus tips on top, lightly sautéed in the pan.

What happens to the stalks of the vegetable? Do they go to waste?
CL: I do a butter sauce with the stalks that I don’t use from the asparagus. I trim them down so that they’re white. Then, I chop them up and infuse them in cream to really layer the flavor. I also use that cream to finish my sauce. What I like to do with flavors as much and often as possible is bring in every component of cooking to layer and add depth and character. So, you get the asparagus tips in this dish and what would be waste, I infuse into the sauce to reinforce the flavor.

What inspires you seasonally?
CL: What I’m doing artistically with the menu right now is becoming a monochromatic chef. With my pasta dish, all of the elements are different varying shades of green. I have another dish on my menu right now, which is varying shades of orange and yellow. It’s a fun way to play with color. I enjoy turning every plate into a piece of edible art. That’s the goal at Blackbird.

How about a handy asparagus cooking tip?
CL: When I blanch asparagus, the goal is fork-tender. Bring your pot to a soft boil, like 120 degrees, if you want to get precise. You don’t have to use a whole pot full of water either; you can kind of steam them. When you’re steaming them, you want to season your water as you would pasta water. You can add aromatics to your blanching water; but with asparagus, I don’t want to overpower it, yet I want to give it some characteristics to its flavor profile.

What do you add to blanching water?
CL: I add some citrus acid, which is a fancy chef ingredient that keeps the green color. Then, add some lemon juice, chili flake, kosher salt and a little bit of thyme. You always want to be cooking in a broth; you don’t want to cook in water. When you cook in a broth, you add depth, you add character and you create a story.