He’s Got His Technique Down and Everything…

Portland’s favorite bartender Jeffrey Morgenthaler doesn’t want to tell you what to drink; he’s more concerned about the technique behind your blended strawberry margarita. The prolific blogger, Playboy contributor, barrel-aged cocktail pioneer and bar manager of Clyde Common in Portland’s Ace Hotel (and, more recently, Pepe Le Moko, Clyde’s quiet, subterranean counterpart) can add “author” to his repertoire after his book with Martha Holmberg, The Bar Book: Elements of Cocktail Technique, was released in June [2014], filling a niche he says had yet to be filled before its debut.

In anticipation of Morgenthaler’s scheduled “extra credit” workshop and book signing at Sacramento’s Citizen Hotel during Midtown Cocktail Week, Submerge caught up with the enigmatic barkeep via speakerphone on, of all things, a beer run (“I screwed up on our beer order,” he joked) just two days after Clyde Common took the Best American Hotel Bar Spirited Award at the Tales of the Cocktail gathering in New Orleans. 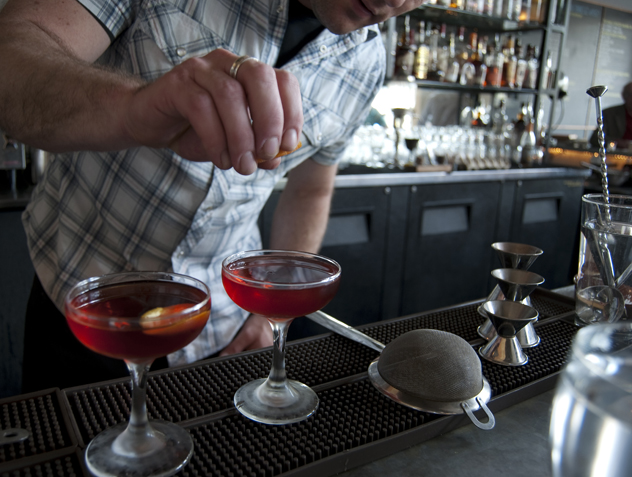 I was bummed I didn’t get a chance to check out the book before we chatted. I’m sure you cover things like why all of my stuff gets stuck in my muddler when I make drinks at home? I’m thinking I’m just using the wrong muddler…
Yeah, there are essentially two types of muddlers, one that’s used for things like herbs and one that’s used for things like whole fruit. And we talk about both of those types and how to use them correctly. I mean, everyone thinks they know how to muddle but there really is a technique.

I also like how you embrace the blender. I work with a former bar manager, and I don’t think you can get him to touch a blender with a 10-foot pole.
I feel like a lot of bartenders who don’t like blenders have never actually had to work with a blender. I have worked the blender station. I’ve put out literally hundreds of thousands of blended drinks in my life. I mean, who doesn’t like a blended drink, right? They’re delicious. And fun. But it raises a bigger issue. And one of the things I really wanted to do with the book was not pass judgment on any of these techniques. Because drink trends flip so quickly. It was just a few years ago that infusions were the cool thing. And a couple years later, making bitters was the cool thing. And now blenders are not cool, but blenders are gonna be cool again! I wanted the book to be timeless and not tell people what they should drink but how they should make whatever it is that they want. I mean, I don’t care, I have no dog in your fight; if you want to make a blended strawberry margarita, that’s fine with me, I’d just rather you know how to do it the right way. I think the people that are telling others what they should and shouldn’t be drinking are kind of…fuckin’ assholes, you know? [Laughs.] I don’t want to be that guy. Yeah, you wanna make blueberry infused vodka? Fuck yeah, I’ll show you how! It’s easy, you know?

Speaking of trends, you’ve been credited with leading the trend on barrel-aged cocktails, but I’m not totally clear what that is all about.
So, I had this idea to take a whole cocktail, like a large quantity. Not a martini, but three gallons of martini, and put them into a small barrel and let that sit and age in an oak barrel for however many weeks and months, then take it out of the barrel, and stir it and serve it. It was just this silly little idea I had, but it’s oddly enough grown into this worldwide trend. There are bars literally all over the world…like, I had these people come into my bar and they own a bar in Singapore, and they brought me samples of their barrel-aged cocktails. It’s super surreal!

Who did you write the book for?
Really, everyone. I didn’t want to limit this thing to professional bartenders. I wanted to give all the secrets, whether you’re a beginning bartender or a bartender who’s been doing it for a while or somebody who just wants to make drinks at home, I wanted it to be accessible to everyone, but engaging and interesting enough to people on sort of both ends of the spectrum. You know what I mean?

I totally do. The only reason I’m asking is, sometimes your blog seems geared toward bar professionals, but mostly it seems applicable to anybody. You don’t go over anyone’s head…
Yeah, I try to keep my tone sort of…kind, because people might be reading it who don’t know. I think there are enough people who want to talk down to people. I try to keep it engaging to people that are very well versed at this stuff, but also without leaving anybody behind. And that’s what I wanted to do with the book. There are definitely some advanced techniques for bar professionals, but there’s basic stuff. Like, how do you use those clamshell hand juicers? That’s been one of the big ones. 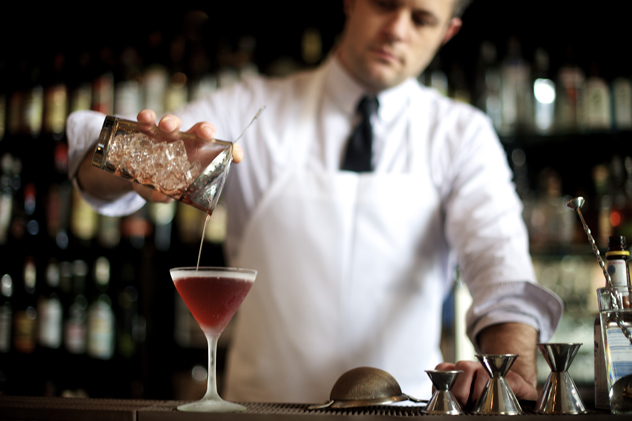 When you started to write, was it, “these are the things I’ve learned and should be out there,” or was it more a response to the rise of the craft cocktail movement?
No, actually, it was sort of a way to help myself. What I really wanted to do was I wanted to connect with other people so I could learn more. I was in a really small town. When I started bartending, I was in Eugene, Oregon. So there’s nobody there who’s going to teach you how to do this stuff. Half the population is binge-drinking college students and the other half is blue collar farmers and stuff who just drink beer. So if you’re me and you’re interested in this type of stuff, you don’t have a lot of people who are going to teach you, especially not in the late-‘90s. I had to do a lot of stuff myself. I wanted to have an online presence so I could reach out and connect with people that would teach me, and also pay it back a little bit by teaching others. Which has always been really important to me, sharing what I’ve learned. Because I remember what it was like to be a kid in a bar in a college town that didn’t have access to information. It’s always been really important to me to share what I know with other people.

If you had to recommend something for someone at home, maybe the top five things they should have?
I really think—I get that a lot, what are the five bottles that people should have—it depends on what you like. There’s no point in telling you that you should get a bottle of scotch if you don’t like scotch. But I think if you’re only going to have five bottles, it’s important to have a range. Unless the only thing you like is vodka, in which case, get five bottles of vodka. But if I were going to do only five bottles for myself, I’d probably have a bottle of vodka, a bottle of gin, a bottle of aged rum, a bottle of silver tequila and maybe a Cointreau or something, one of the more common liqueurs you would use. But again, it would depend on what kinds of drinks you like to drink at home.

What about tools?
Well, that can get pretty crazy pretty quick.

But I did notice you haven’t blogged much recently. Has the book been the main focus?
The book has been keeping me really busy. I just haven’t had a lot of time to write. Which bums me out. I never want to give up on my website, but I certainly don’t have the time to write. I’m also writing for Playboy…

Don’t miss Morgenthaler’s live presentations and chat about The Bar Book in the Metropolitan Terrace of the Citizen Hotel Wednesday, Aug. 20, 2014, as part of the Education segment of Midtown Cocktail Week. The event is from 5 to 6 p.m. and is $10. For more information, visit Midtowncocktailweek.org/education.