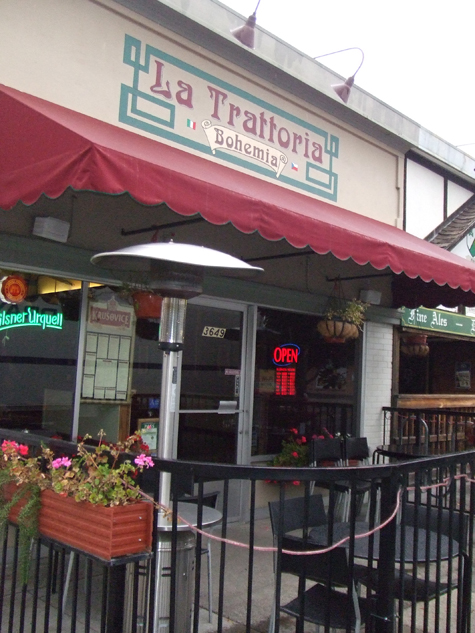 I don’t know about all of you fun, food-curious fanatics out there, but my interest in the food inside any restaurant is dependent upon its outside appearance.

On many a brisk walk to enjoy a cider at the Bon Lair, my interest was piqued by the artwork on the side of La Trattoria Bohemia. Stick with me here. If you head east on J Street, you will see two gorgeous signs on the left side of the road boasting Italian, Czech and Bavarian cuisine within. It wasn’t the somewhat odd combination of cuisines that caught my eye, but the art nouveau copies of Alphonse Mucha’s early 1900s Czech prints. The images are an enchanting (in a non-drug-induced way), inspiring and articulate mixture of women and swirls and swoops of color.
Interest in the restaurant may have stemmed from the Mucha artwork on the outside, but further cyber research led me to a menu with a few dishes that could have actually been tasty. So, off I was to try it. 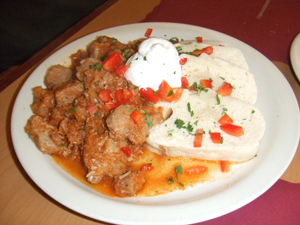 I admit, the reason I chose to eat at La Trattoria Bohemia had nothing to do with the food. Honestly, judging from the shabby, pub-like appearance from the outside, I probably should’ve stayed away.

Inside the joint, La Trattoria Bohemia’s decor was crisp and clean. The walls boasted modern burgundy lines and borders surrounding pastel hunter green and cream. Mucha prints highlighted the walls with beautiful Czech women and 19th century vision. The open bar was Old World modern. The whole place was like an oxymoron—or like that average-looking person you date who has a stellar personality. Unless you had the courage to be non-judgmental, you’d never receive such a wonderful and unexpected surprise.

The food was even better than the interior. What a surprise. I’ve taken many a culinary adventure—trying new places and ordering the most unusual dishes—but few actually ended in food that was better than expected.
I dragged a foodie friend along to help me taste what La Trattoria had to offer. (Plus, dinning is better with company.) We were both surprised by the freshness, flavor complexity and presentation of the food. 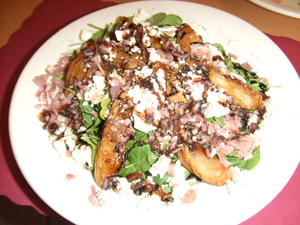 For a starter (it was an appetizer AND dessert kind of lunch), the potato cakes practically jumped out and screamed “Pick Me!” in CzEnglItalian (I don’t actually know what that would sound like). Several Italian starters also looked good, but I couldn’t recall the last time I had a potato cake, much less a good one. The choice was between the slightly sweet Czech potato cakes ($7.75) or the savory Bohemian potato cakes with salmon, red onion and sour cream ($8.75). As per the waitress’ advice, we went for the latter.

When you order an appetizer and it’s actually incredibly appetizing, you should give yourself a high-five or gold star for a choice well-made. The browned potato pancakes were stacked Napoleon-style and sandwiched pink smoked salmon, sour cream and sweet red onion. The gorgeous structure smelled deliciously of basil and oil-crisped potato, well garnished with cured green capers and diced vibrant red bell pepper. The potato cakes seemed to be seasoned with a mixture of basil, oregano and other undecipherable spices. The crispy, potato-y, salty, vinegar-y sweet flavors melanged so well. Texture was fabulous and varied with crunch and cream. The appetizer portion was big enough for a meal (depending on how you grub down), and by far the best part of the meal.

Since I’m kind of poor, but more importantly bloated from heavy holiday foods (yes, still), I wanted to opt for a lighter main dish. If someone offered you an arugula salad with caramelized pears and prosciutto, would you turn it down? No. Exactly. I didn’t either. 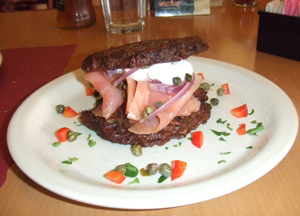 In a medium-sized bowl, I received a mound of small green arugula leaves covered—not just sprinkled—with the mildest bleu cheese and prosciutto, a pinwheel of chilled grilled pears and drizzled with reduced balsamic vinegar.
The salad was actually much bigger than it looked. As I ate my way through the arugula, the bleu cheese and prosciutto seemed to sink and bathe in the sweet balsamic vinegar pool that accumulated.

La Trattoria Bohemia serves the kind of food that seems to get better as you work your way through your dish. It’s a bizarre and intriguing experience.

My friend had the Bavarian goulash with pork, sauerkraut and Czech dumplings. The only complaints were that the dumplings were too dry—which is typical of traditional Czech dumplings—and more gravy from the goulash would have been nice. 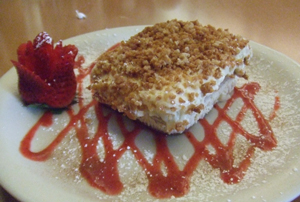 Although we were full, we were enticed to try the homemade tiramisu. The dessert was very tasty. There was a good cream-to-lady-finger ratio and the coffee liqueur and almond flavors really came through. We did eat all of it; but for $5, it was a touch too expensive.

As a wrap-up, I would say that La Trattoria Bohemia deserves a solid rating of 7 out of 10. The food was fresh and delish, but each dish was overpriced $1 to $3 more than it should have been. The restaurant was clean and modern, but the atmosphere was slow and dull.

If you’re ever at the Bon Lair at a decent hour and want some decent grub, head over. You’ll be surprised. But you probably won’t care for the dumplings.