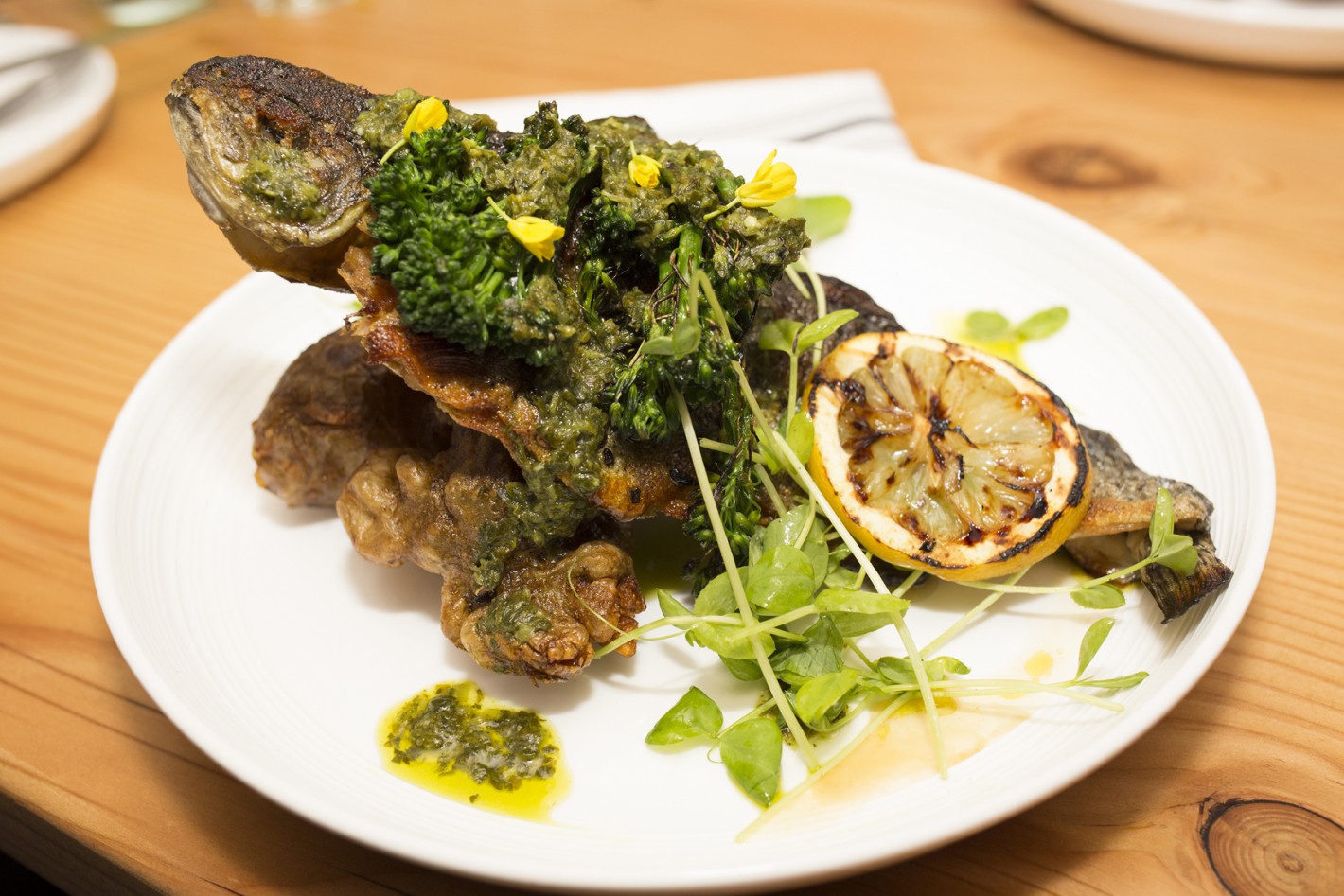 The foodie scene in Sacramento just got a breath of fresh air.

Quietly tucked in the old Hina’s Tea space on K Street (between 23rd and 24th), something completely different awaits to provide Sacramento with new culinary experiences. Skool, first opened in the Potrero Hill district of San Francisco in 2010 to rave reviews, has come to town.

As implied by the name, the menu is fish-focused, with an emphasis on sustainably caught and farmed seafood. Serving dinner on weekdays and brunch and weekends, the dishes are Japanese- and European-inspired, with a modern approach. Interestingly, there are also a number of unique dishes targeting vegans, vegetarians, and gluten-free dieters. As I was dining with our vegan photographer Evan Duran and his rad vegan girlfriend Erin, I sampled vegan and fish-centric entrees alike, and not one bite was taken without eliciting a rush of the joy of good food.

Andy Mirabell, one of Skool’s four owner/operators, elaborates, “The kitchen in San Francisco is quite a bit larger, so we have a dedicated vegetarian menu, a dedicated vegan menu and our gluten-free and regular menu. Here, we have a little bit of a smaller menu, and for Sacramento, we added our grill menu—which has grilled crab, squid, oysters, burgers, things like that—and we’ve marked on the menu everything that can be prepared vegan, vegetarian and gluten-free.”

The Big Salad, available upon request, was a mouthwatering mound of mixed greens, cacao beans, wheat berries, broccolini, bell pepper, olives and capers, and was bathed in a tart and savory cucumber vinaigrette. The vegans at our table also summoned the Pan-Sauteed Shisito—long, green peppers prepared with a curried black sesame furikake and spiced up with house-made curry powder, onion, garlic and sesame. Shares Mirabell, “We had to stop carrying them for a while because of the drought—they got too spicy, but they’ve mellowed out again.” This attention to ingredient integrity is evident in everything we tried.

Next to arrive at the table was the Uni Flan, one of Skool’s signature dishes. Sea urchin is rolled in creamy, custardy flan and topped with more uni, kombu cured ikura and fleur de sel. This dish was way outside of my comfort zone. I had to look up what ikura and uni were, and they are salmon eggs and sea urchin gonads—I was like, whoa, barf. But I had to try it in the name of research and I am so glad that I did. Served in a cute little mason jar, you spread the Uni Flan on toast, but a few unforgettable bites in, I was eating it with a spoon.

“Our signature dishes are the Uni Flan and Squid Ink Spaghettina, but my personal favorite dish is the Namaro Tartare,” says Mirabell, giving me yet another reason to return! “We’re using Ora King Salmon here, and it’s served with quail egg. It’s kind of fun to interact with because you get to build your own hand rolls using seaweed.” Um, YUM!

I ordered the Idaho-Farmed Pan-Roasted Trout as my main course. Head still attached, staring me in the face and snarling, the trout laid upon a generous portion of sunchokes and broccolini, seasoned with chimichurri sauce, grilled lemons, herbs, olive oil, garlic and lime. The fish’s crispy skin was buttery, rich and steeped with flavor, and the meat was flaky yet juicy. I’d never had sunchokes before and was pleasantly surprised—they taste like turnips!

For dessert, we savored the flourless green tea cake with ice cream and a house-made raspberry sorbet. The Matcha White Chocolate Cake comes in another cute little mason jar with vanilla ice cream slowly melting into the cake. Walnuts add texture while butter, egg and citrus zest add dimension to the flavor profile. Skool uses the finest grade matcha shipped from Japan to make this treat. The sorbet was visually appealing as well as delicious, topped with tiny yellow edible flowers.

Skool’s biggest challenges in opening the Sacramento location were the lack of curb appeal and not being able to obtain a full liquor license, but the owners overcame these obstacles expertly.

“This space was kind of sunken back from the street and really dark, and was a challenge to facelift. We wanted to make it bright and more appealing from the sidewalk, whereas our San Francisco location was already pretty set up and really beautiful inside, and we really just had to finish that one off,” explains Mirabell.

I glanced around the open interior—the lighting is soft, flattering, and calm, the decor is understated and comfortable, yet contemporary. Natural textures fill the space amid a neutral color palette.

In regards to the beer and wine only license, they had to get creative.

“We have a full liquor license in [San Francisco], whereas here it’s beer and wine, so we worked really hard on our apertif cocktail program, so you still feel like you’re having a cocktail. It’s worked out really well so far, and it’s been well-received. I really like wine. Sacramento’s a huge beer town. I’m not a big beer guy, so I really reached out to people that love beer that are locals. I have a neighbor who is from Berryessa, an amazing brewery. We have their Separation Anxiety IPA which is outstanding. I’m trying to learn about what locals like. But we focus a lot on Japanese beers here, too, which I really like, because they’re lighter beers. I’m a wimpy beer drinker,” he confesses.

Skool is a partnership of two husband and wife teams; Olia Kedik is the wife of Andy Mirabell, and Executive Chef Toshihiro Nagano (aka Moto-San) and his wife, Pastry Chef and Creative Director Hiroko Nagano are their partners. Here’s how Skool came into session: “I created the concept and manage the restaurant, my wife is an advertising graduate, and she does our logos and design work. I worked with Moto for approximately 10 years before we did Skool. We opened Blowfish Sushi together and had locations all over. He was tired of sushi for a minute and went and did some French, and I worked on developing this concept, and in 2010 went back and asked him if he wanted to work together again, and the answer was yes!” remembers Mirabell.

Perhaps even more charming than the absolutely wonderful food is that 916 pride that Mirabell revealed as we spoke. “We made a move. I’m from Sacramento, so my wife and I, and my daughter, we moved back here, and now we do the reverse commute. I went to high school at Jesuit, graduated in ‘97.”

At this point in the conversation, our photographer, Evan, disclosed that he graduated from Sac High in ‘98 and played soccer against Jesuit, and the owner said he was not going to apologize.

Skool is located at 2319 K St. in Sacramento. The restaurant is open for dinner at 5 p.m. Tuesday–Sunday, and for brunch 10:30 a.m.–4 p.m. on Saturday and Sunday. For more info go to Skoolonkstreet.com