Mixin’ it Up for National Martini Day

People often default to ordering a Martini because of its familiar name and its connotation of sophistication, but do many people really know what makes a Martini, and what does not? Honestly, no one knows when the first Martini was even born, but several similar recipes for what is now considered a Martini that emerged in the late 1800s. It was prohibition that gave rise to its prominence and proliferation in the hands of American lushes, as bathtub gin was a readily available alcohol in the absence of diversely stocked liquor stores.

A Martini is traditionally made with gin and vermouth, and garnished with a lemon twist. Famous variations include the Dirty Martini (instead garnished with an olive and mixed with olive juice), and the Gibson (a dry martini with cocktail onions as the garnish). 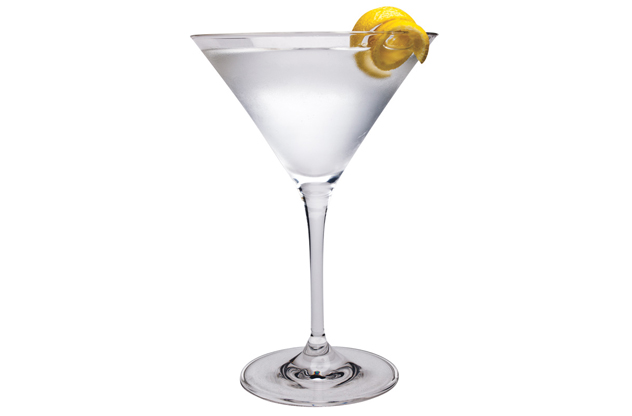 A vodka Martini is not really a Martini. It’s called a Kangaroo Cocktail.

Just because it’s served in a Martini glass does not mean it’s a Martini—drinks like the Appletini are made of completely different ingredients, although served in the iconic glassware.

A shaken Martini tastes different than a stirred Martini. It is debated that shaking a Martini “bruises” the gin, so stirring is preferred by some, although James Bond popularized the request to have it “shaken, not stirred.”

At the Algonquin Hotel in New York City, they serve a $10,000 Martini to fancypants rich folk, garnished with a real diamond.

The Martini glass was designed during Prohibition so that when the Five-0 showed up at a party, people could quickly discard the liquid in the glass.

“I never go jogging, it makes me spill my martini.” – George Burns

“Martinis are the only American invention as perfect as a sonnet.” – H. L. Mencken

”I had never tasted anything so cool and clean… They made me feel civilized.” – Ernest Hemingway in Farewell to Arms

“I like to have a Martini, two at the very most… After three I’m under the table, after four, I’m under my host.” – Dorothy Parker

“He knows just how I like my Martini…full of alcohol.” – Homer Simpson

“If it wasn’t for the olives in his martinis he’d starve to death.” – Milton Berle

Shady Lady’s Travis Kavanaugh Sounds Off on the Wildly Popular, yet Misunderstood, Martini 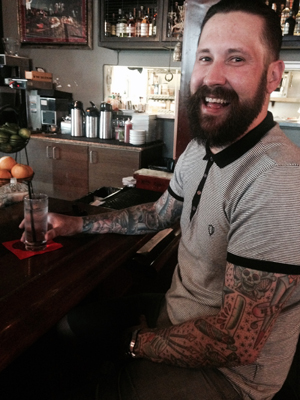 In honor of the upcoming National Martini Day (June 19), Travis Kavanaugh, a well-known and talented bartender at the Shady Lady, took the time to clarify some common misconceptions about the Martini. Here’s our little Q&A that ensued…over a couple of beers.

Tell me about Martinis and why the misconceptions about them get on your nerves.
It started in Martinez, California, where a dude came in that had struck gold, and was so excited, and wanted the bartender to make him a drink. So the bartender, Jerry Thomas, basically the guy that started cocktails with his book in the 1800s, made him a drink that was Old Tom’s Gin, sweet vermouth, cherry liqueur and orange bitters.
And after that it kind of got adopted into a gin Martini, which is dry gin, dry vermouth, and occasionally a twist of citrus, or orange bitters… No one knows where the olive juice came from—I’m assuming the ‘80s and cocaine? That’s the only thing I can think of because anyone who orders that is that style of person, I hate to say it!
So I think that’s where it started, I was like, “People need to know.” Because even a vodka Martini, which everyone thinks that’s what a Martini is now, is actually called a Kangaroo, it’s not even really a Martini. It’s a whole other thing. So I wanted to educate people so I won’t have to yell at them anymore.

Assuming people actually read this.
And those that will are probably not the group of people I want to know!

So have you ever flashed on someone for using the wrong terminology?
No, it’s not their fault. It’s just people that drink mass-produced products, you know, that’s what TV says, that’s what magazines say, that’s what popular, that’s what you know. We’re in a society where everyone is told what to do. They don’t want to think when they come to a bar—they want to be told. They just go to what’s on the billboard on the drive here. So I think it’s a good idea to educate them. I’m not really going to yell at someone for not knowing. Just because it comes in a Martini glass does not make it a Martini.

Like the Cosmopolitan, annoyingly popularized by Sex and the City, which is the dumbest show ever.
I actually thank Sex and the City, because it actually helped the whole cocktail movement. Because people saw that and wanted to start ordering it, and then craft bartenders started coming up with a bunch of other cocktails. And that show doesn’t bother me! I should never admit that.
It’s just funny to me that people drink a certain cocktail for 15 years and have no idea what’s in it.

Why do you think they do that?
Because they don’t care. They just want to get drunk.

What’s your go-to? Mine’s an IPA and a shot of tequila.
I was just going to say that! I think being from California, we like piney things. We love marijuana, we love IPAs, we love our Chartreuse, we love our Frenet…herbal. And tequila—herbal. To me, that’s California. Stuff with a robust aroma on it.

Dank.
Yes! It all goes hand in hand.