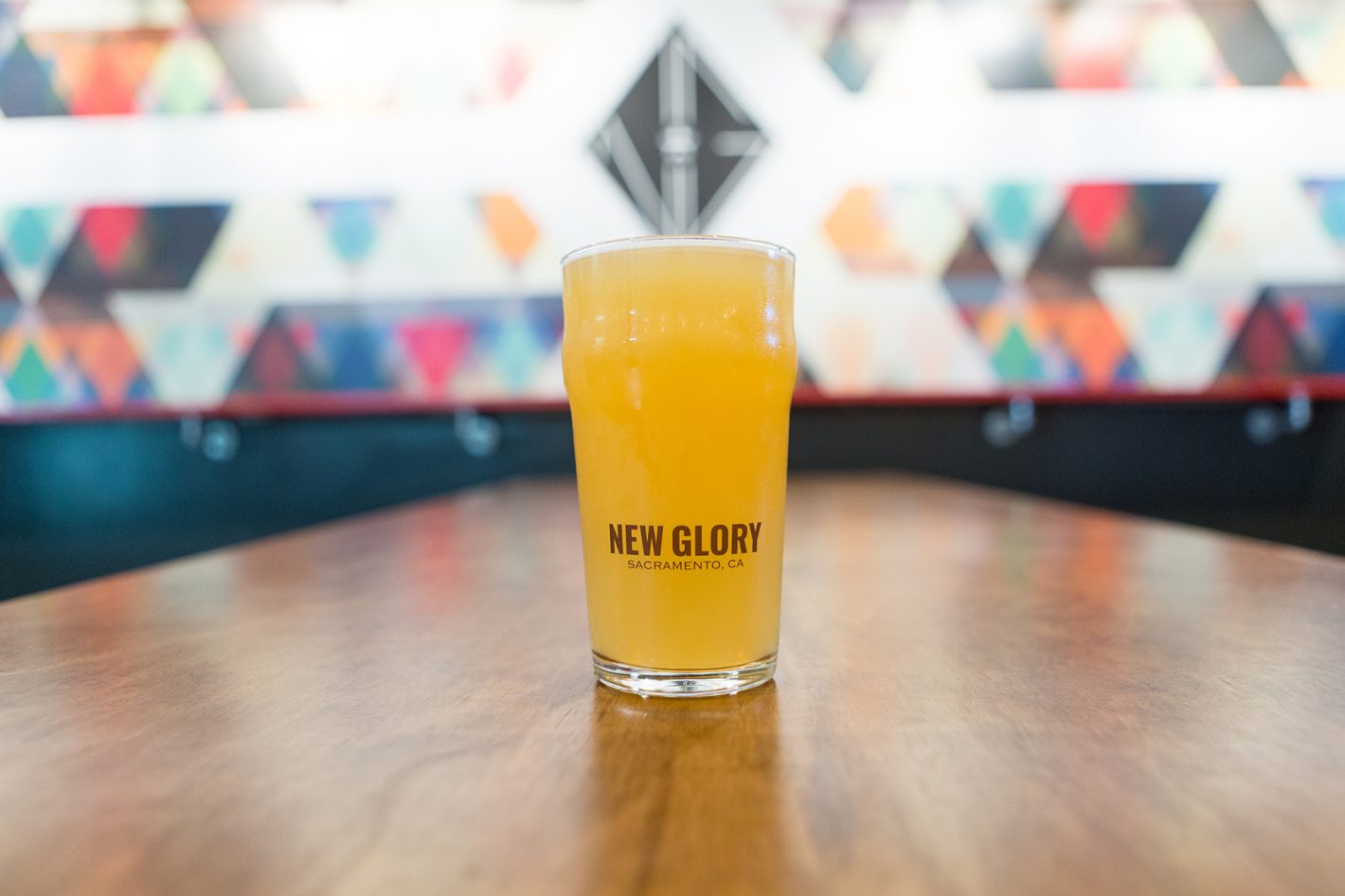 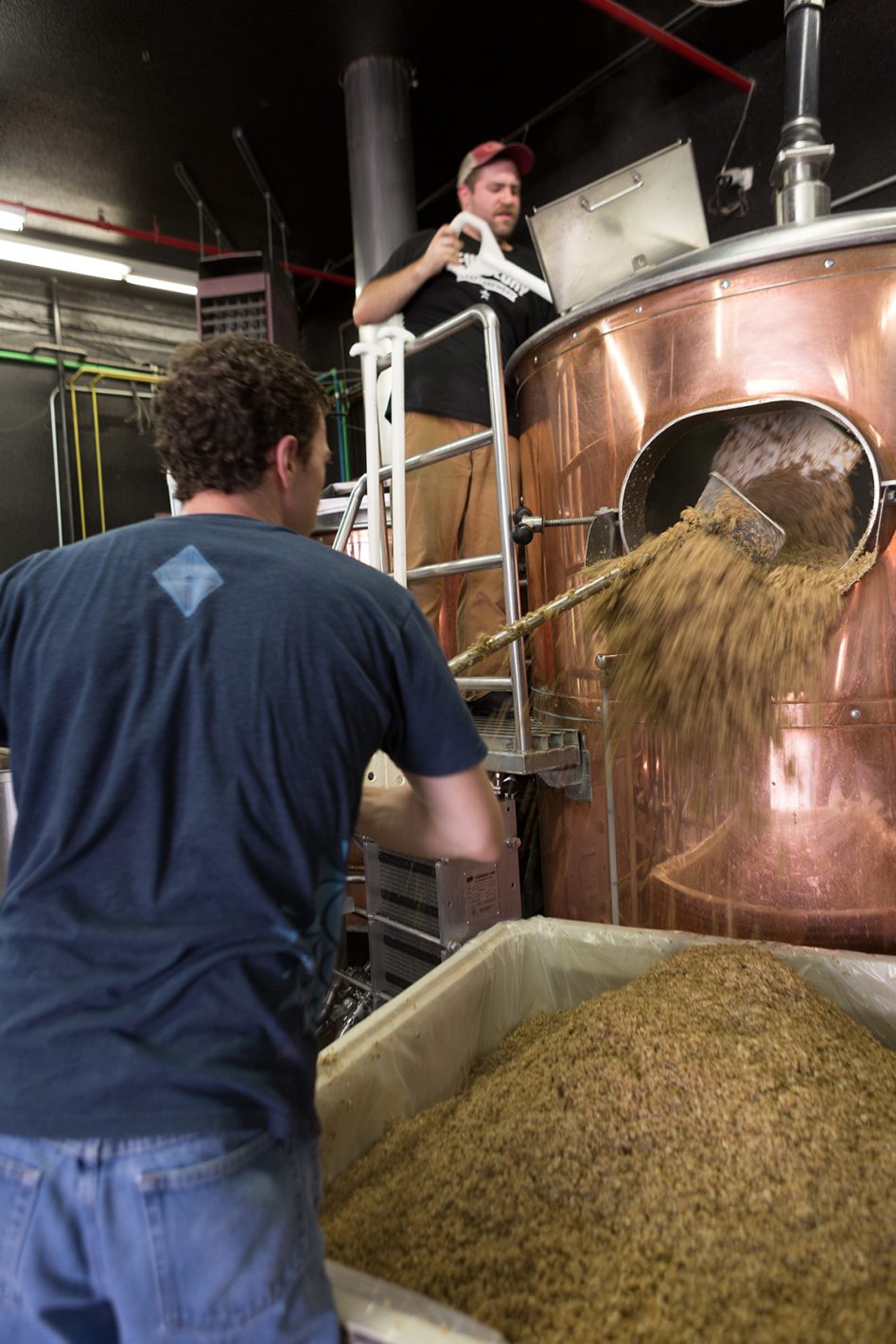 New Glory Craft Brewery is inconspicuously located in the depths of an industrial district off of Power Inn Road with nothing but modest signage to guide patrons to its door. Despite being off the beaten path, where there is good beer people will come. When I visited New Glory one early Friday afternoon, there were already customers trickling into the taproom and filling up boxes with four-packs of beer for the weekend ahead. The recently renovated New Glory taproom is on the small side, but it’s pretty perfect. The industrial area it is situated in is surprisingly serene and relaxing; I sat on the patio and was surrounded by a citrus tree and lush green shading, realizing that its isolated location is actually a treat.

When people are concerned with oversaturation of the local beer scene, all they have to do is visit a place like New Glory; a humble and practical location that has been successful, beer that has been continuously exciting and delicious, and growth that has been responsible.

On June 30, the brewery will be celebrating their fifth anniversary in a very unorthodox, but very cool way: They will be hosting Sudsapalooza, a massive beer party that celebrates not just New Glory, but the beer community as a whole. From 11 a.m. to 3 p.m., more than 30 breweries from California and beyond will fill the parking lot of the taproom, each pouring two of their signature suds. As if the 60 beers being simultaneously poured isn’t enough to lure the avid beer drinker, the event is being capped off at 500 people to keep it small and to keep the all-you-can-drink beer plentiful for all. 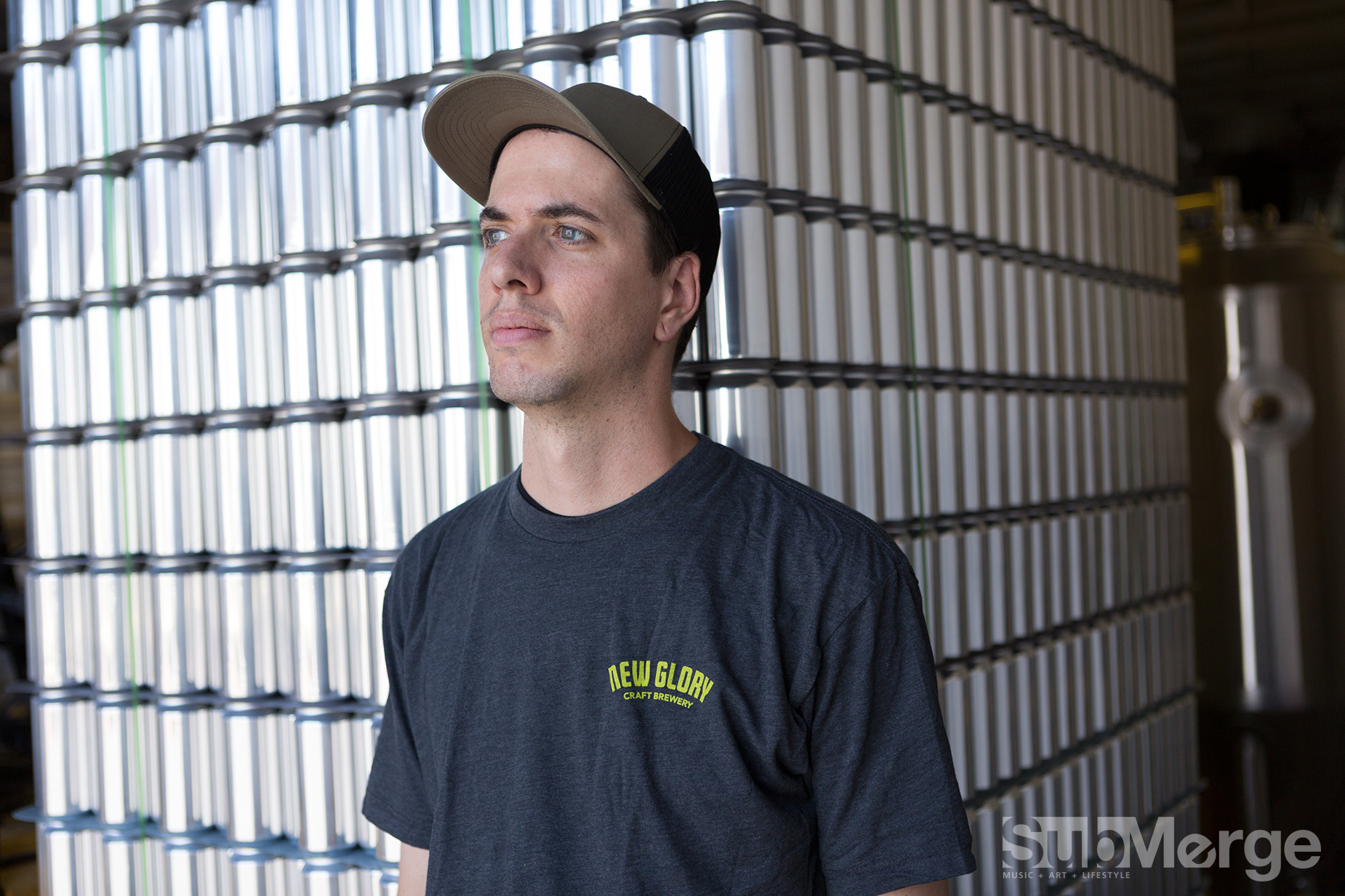 When asked why they decided to share the spotlight instead of basking in their own glory, longtime employee Trevor Davies said, “We really want all of our beer friends to come party with us. Our goal is to celebrate with those we have collaborated with and respect. As local beer lovers, we find ourselves buying their beer anyways. We are fans of the things other breweries do, too. We wanted this to be special and integrative.”

Davies has been with New Glory since nearly the beginning, starting off in the taproom a few years ago and making his way to sales and brand management. He takes pride in holding the title as longest-standing New Glory employee. When he first started, there were less than 10 taps in the taproom. Today, there are 27, with never less than 18 flowing fresh beer at a time. It is perhaps the most taps I have seen in a brewery that pours their own beers exclusively. Despite the tons of available beer, freshness and quality is not sacrificed. Davies says that his number one priority is to ensure all taproom and distributed beer is that which is squeezed fresh out of the fermenters.

New Glory keeps it exciting and has a little something for everyone. A key feature of these beers are dank hops, expressive yeasts and the flavor hybrids of your dreams. 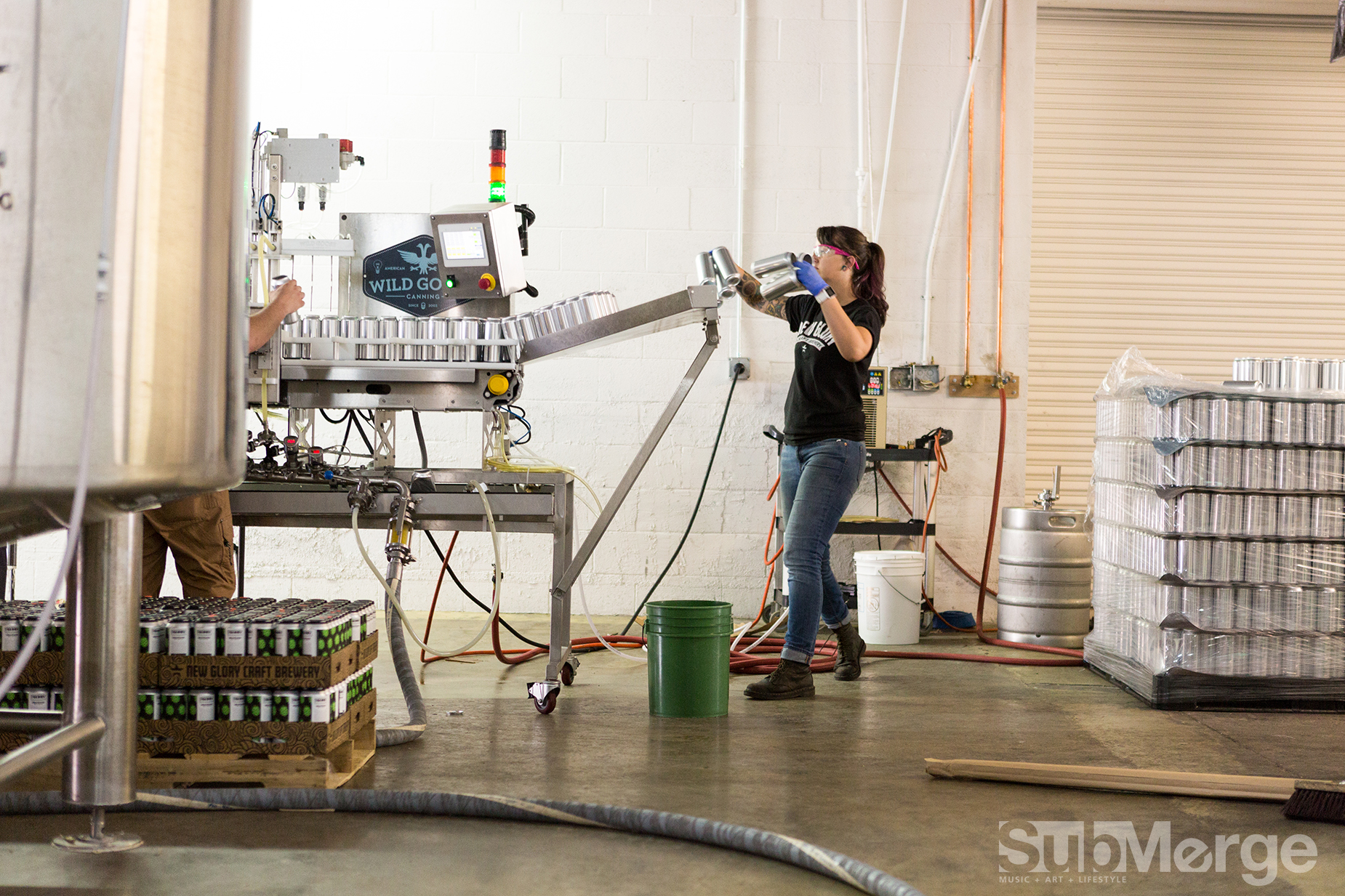 On my recent visit, there were the standard IPA, pale ale, lager and stout offerings, but there was also some straight up mad scientist type shit. Let’s start by talking about the very unique double Northeastern IPA called, It’s Got Electrolytes! This strong, hazy IPA has citrus juice and Gatorade concentrate in it and drinks like a super non-abrasive IPA with velvety soft hop and fruit notes. It also literally has electrolytes in it. I guess you can say it is the perfect recovery beer after a workout. Other crazy but delicious concoctions include the maple pastry stout, a brut IPA and the wildly popular Key Lime Gose. Davies tells me the Key Lime Gose may be available in different variances at the anniversary party.

The best selling beers, however, continue to be the hazy IPAs, the milkshake fruit IPAs and the newly arrived brut IPA. While there may be many opinions on these beer styles from avid drinkers, New Glory sees it as just another way to educate people on beer and get them to expand their drinking horizons.

Head Brewer Kyle Leddy, who is one of the few Sacramento brewers without a beard, is responsible for a lot of the recipe development. “I always have innovation in mind,” said Leddy. “I want new, interesting flavors. I love playing around with non-traditional ingredients like electrolytes and champagne yeast strains. I love being able to explore outside of my comfort zone.” 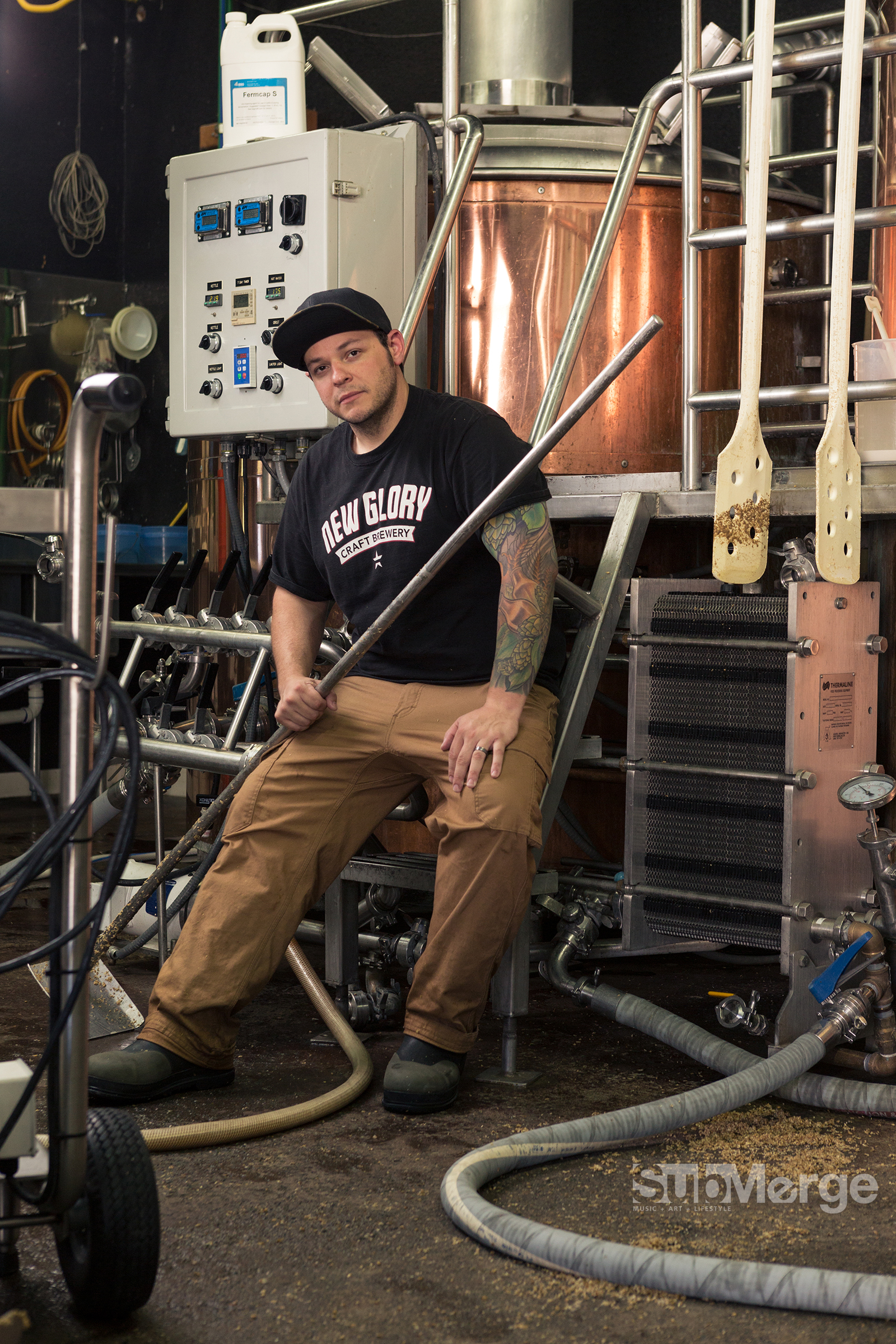 Though he brings many of the beers to fruition, he says a lot of brainstorming goes into deciding which direction the company wants to take recipes in. He says that sometimes someone will bring some crazy idea to the table, and the consensus will either be to shut them down for being too crazy, or work together to figure out how to make it happen. 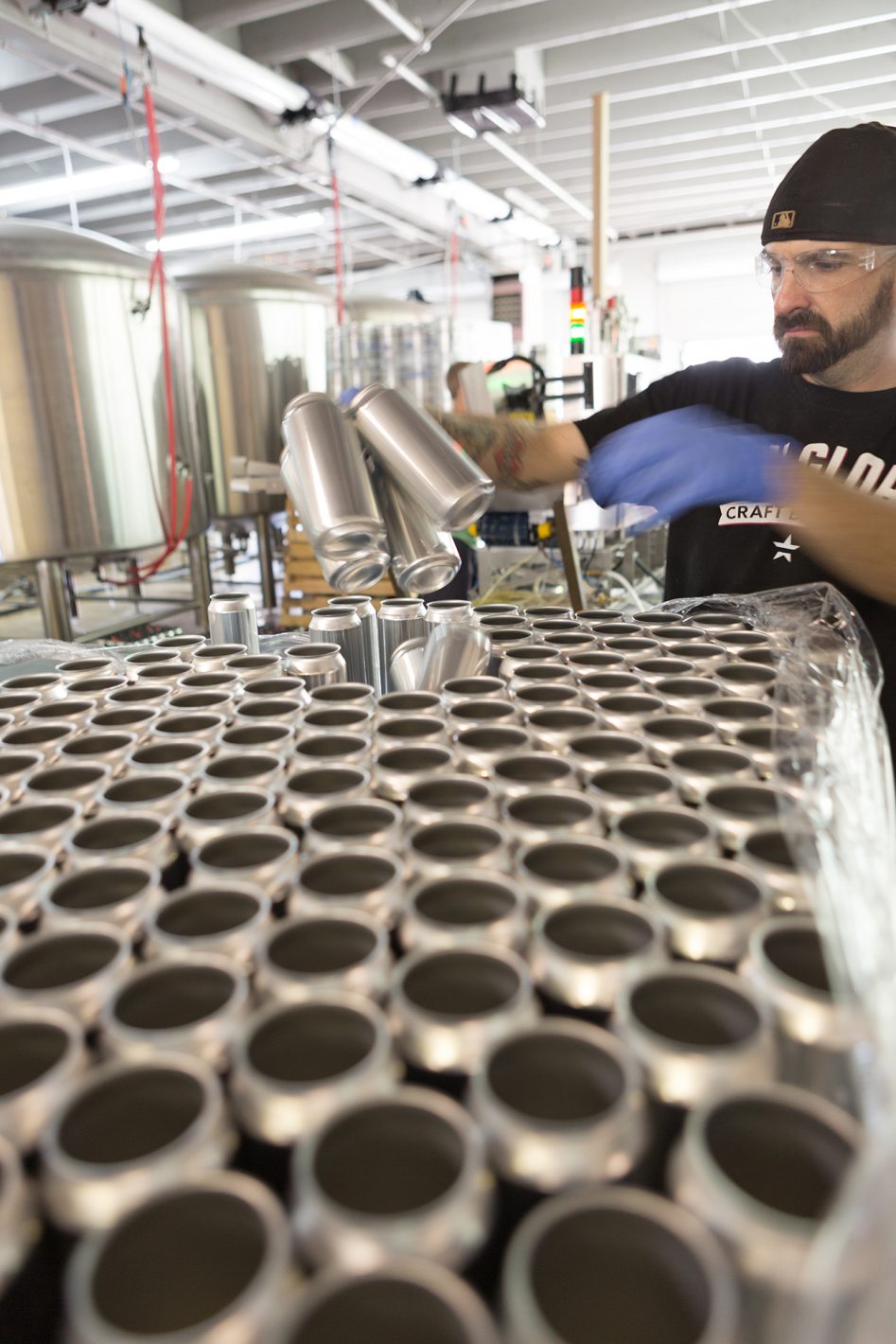 Leddy has been with New Glory just over a year, but jokingly vows to get Davies fired just so he can work toward holding the title of New Glory’s longest-standing employee. Before this, he worked for Black Diamond Brewing out of Concord, American River Brewing, and was part of the inaugural brew staff at Moonraker.

This year, New Glory has experienced many milestones. They have recently renovated their facilities and completely separated the brewhouse from the serving quarters. However, customers can still watch brewers busting their asses through a window with a nice view of the lovely copper fermenting tanks and the occasional dumping of hop pellets. The brewhouse is working hard these days; production recently went from 2,000 barrels a year to more than 7,000.

“We are lucky because despite our size, we still are able to distribute and have lots of capabilities. We are all about freshness. Where we are at right now, we keep stuff as fresh as you can be,” said Leddy.

The company even recently purchased their own canning line, which is not a cheap endeavor, to ensure all four-packs sold are only the ripest from the source. 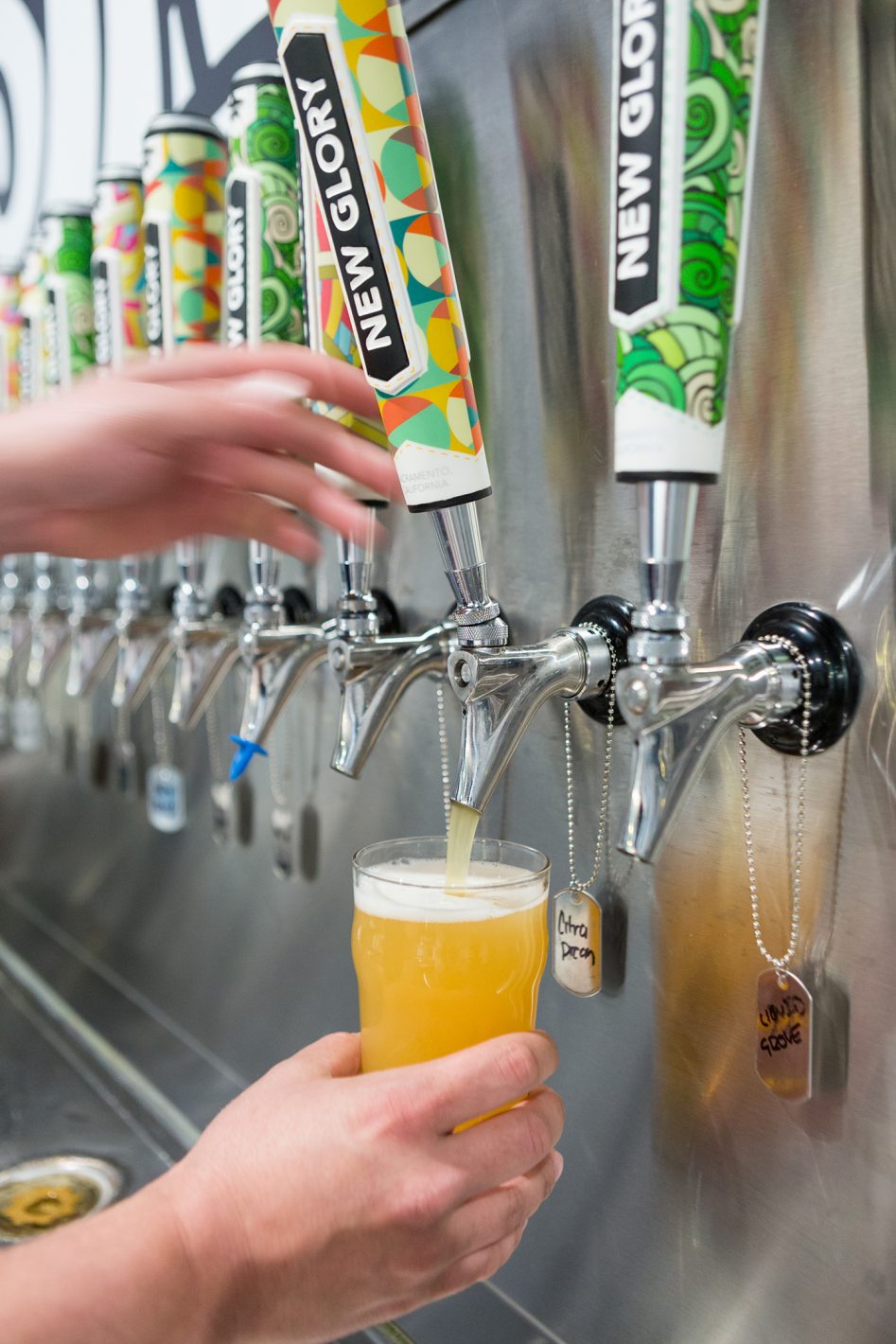 As far as further expansion, Leddy and Davies say that New Glory is taking it easy. While they are working on a Placer County location and actively searching for a third installment by the end of the year, they say that they are rushing nothing.

“We are safe where we are at, and we are happy. We are happy with the quality of our product and the success we have experienced. We will ease into expansion with quality and freshness always in mind,” said Davies.

Their fifth anniversary Sudsapalooza party will celebrate the past, present and future of New Glory and everyone who has been a part of it. The party will have unlimited pours of beer served in limited-edition glassware, live music from the band Burning Daylight People, food trucks and a photo booth. Also, don’t drive. If you Lyft or Uber you will be awarded a whole sheet of super cool New Glory stickers for free.

New Glory Craft Brewery’s Sudsapalooza event may have come and gone, but you can still check out their many tasty offerings at their tap room, located at 8251 Alpine Ave., Sacramento. They are open seven days a week. For hours and more information, visit them online at Newglorybeer.com.