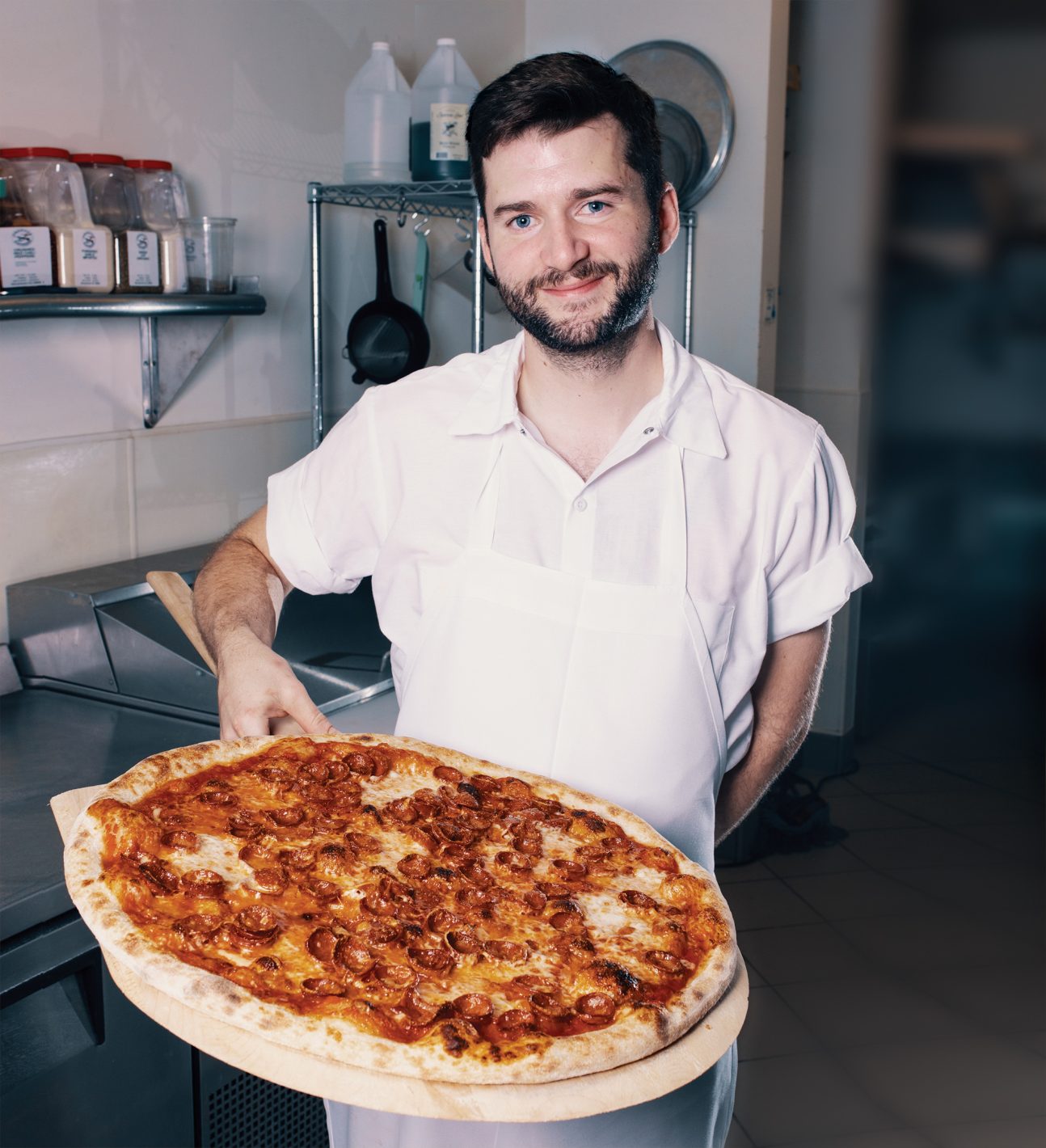 I was born in New York City, grew up in New Jersey. My family is 100 percent Italian on both sides. I’ve never spoken to a family member without food in my mouth. My birthright was a set of The Godfather DVDs (with The Godfather Part III missing) and a sense of entitlement when judging pizza. I’ve eaten everything from Pizza Hut Book-It Club Personal Pan Pizza to genuine homeland, bellissimo, don’t-put-parmesan-on-this-shit margherita in Rome.

When I moved to Sacramento, I fell in love with the city’s fantastic restaurant scene: the diversity of cultures, the focus on fresh, local ingredients, the Gregg Popovich pop-ins. But there was always one piece missing … and it was triangle-shaped. I’m not saying there’s no good pizza in Sacramento, I’m just saying—one hand holding a slice and the other gesturing Italianly—it ain’t easy to come by.

Nothing worth having is.

Ben Roberts grew up in Grass Valley. He had a hard time in school, but baking with his parents was his learning incentive. It was his job to read the recipe and do all the measurements.

“If I did it right, I got brownies,” Roberts remembers.

Ben worked at a hot dog stand in high school before dropping out. He planned to be, in his words, an “angry drifter.” Then, at a record store, he met his future wife, Pembe Sonmez, and she wanted him to get his GED. Plans changed.

On one side of the hot dog stand was a wall dividing it from a sandwich shop. One summer, Roberts got her a job at the sandwich place. After closing up their respective sides each night, they’d go swim in the Yuba River. They stayed together, and when Roberts was 18, he moved to Sacramento to be closer to Pembe, who was studying at Davis.

“I remember watching Sacramento just kind of fall down,” he recalled. “The sewing machine company, Copenhagen, all of J Street, the crepe place—all of that got boarded up. I applied to every single place in the K Street Mall, and one by one they just got boarded up.” 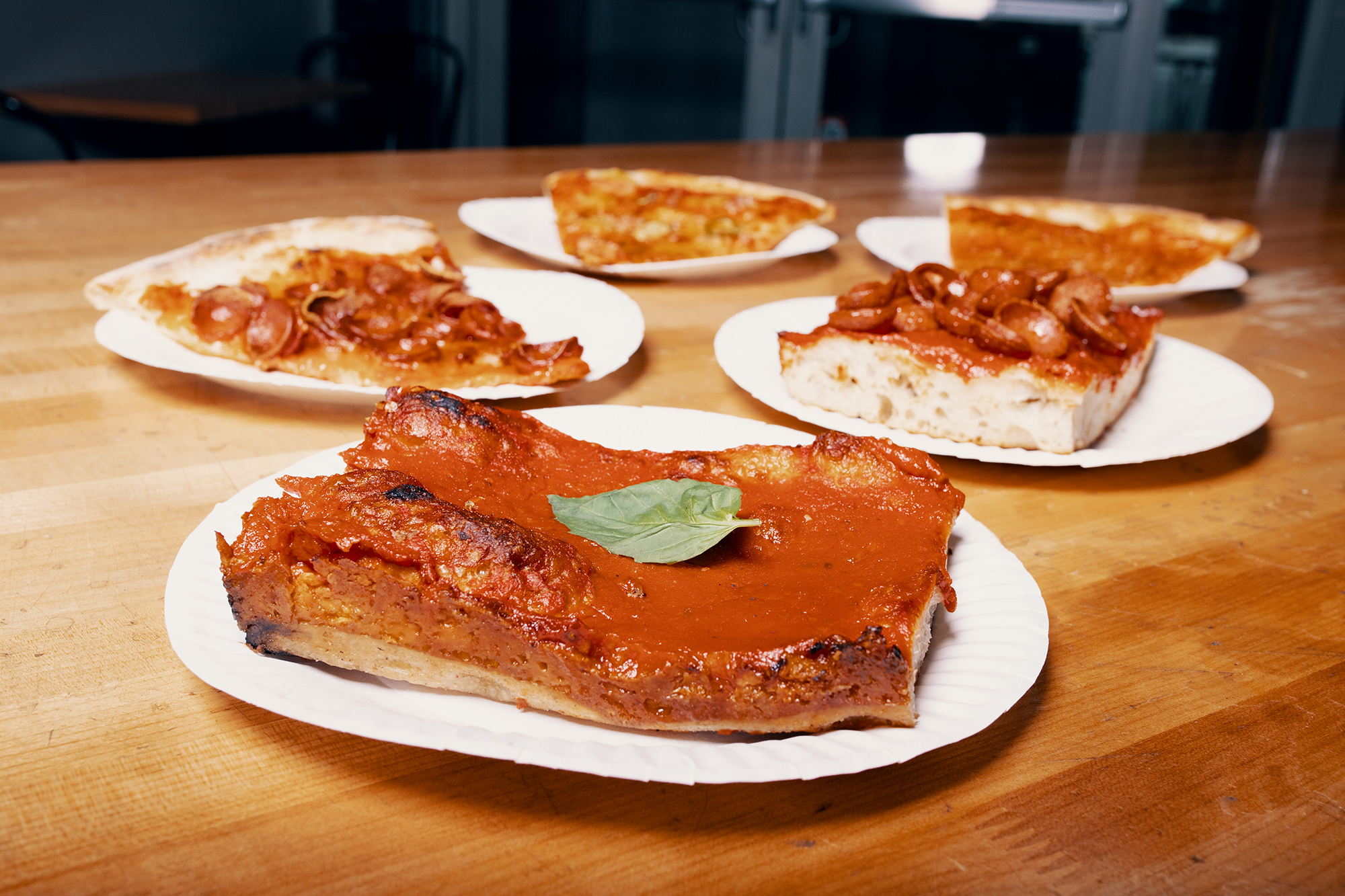 At a job fair on K Street, Roberts applied at a restaurant called Cosmo. When he went in for the interview, he saw that everyone there to apply was wearing a suit. Roberts was wearing a cowboy pearl-snap and ripped jeans. He started to leave as the chef walked in. She asked where he was going. He didn’t think he’d get the job without a suit, he told her. She asked what he was applying for. “Anything,” he said. The chef, Shannon Berg, was from Nevada City, as it turned out. The two bonded over the Yuba River and the hot dog stand. She thought she could find him a pantry position in a few weeks.

But she ended up not hiring him. Roberts needed a job right away. As he was walking home, he got a call from Shady Lady and B-Side owner Jason Boggs, who at the time was running R15. One of his line cooks had come in intoxicated and peed his pants. Boggs fired him on the spot. In a pinch he had called Berg. On her recommendation, he called Roberts to come in for an interview. By then, Roberts had taken off his pearl-snap and was down to a Black Flag T-shirt. When Boggs first saw him, he asked, “You like punk rock?”

Roberts got the job.

The line cook who peed his pants at Cafe Bernardo had made pizza, so Roberts made pizza. Standard California-style, seasonal ingredients, rotating menu. He learned how to mix dough.

But he had been bitten by the high-end dining bug. His dream was to work for the Selland Group, owners of The Kitchen and Ella. “That’s the company to work for in this town,” Roberts said at the time.

Ella wasn’t hiring, so Roberts got a job at Selland’s Market to get his foot in the company door. He worked there for four months. One day he caught wind that someone had gotten fired from Ella and immediately went there, waiting at the bar for an hour for Mike Thiemann (now-owner of Empress and Mother) to come out of a meeting. “I want to work for you,” Roberts told him. He spent the next four years working at Ella.

After a decade in the food industry, Ben came to a realization: “I had the most fun making pizza.”

Roberts and Sonmez (now Sonmez-Roberts) were married and honeymooned in Manhattan. They ate pizza every day of their trip. While in Times Square, they saw a trailer with a wood fired pizza oven. It was a toy Ben knew he had to have. 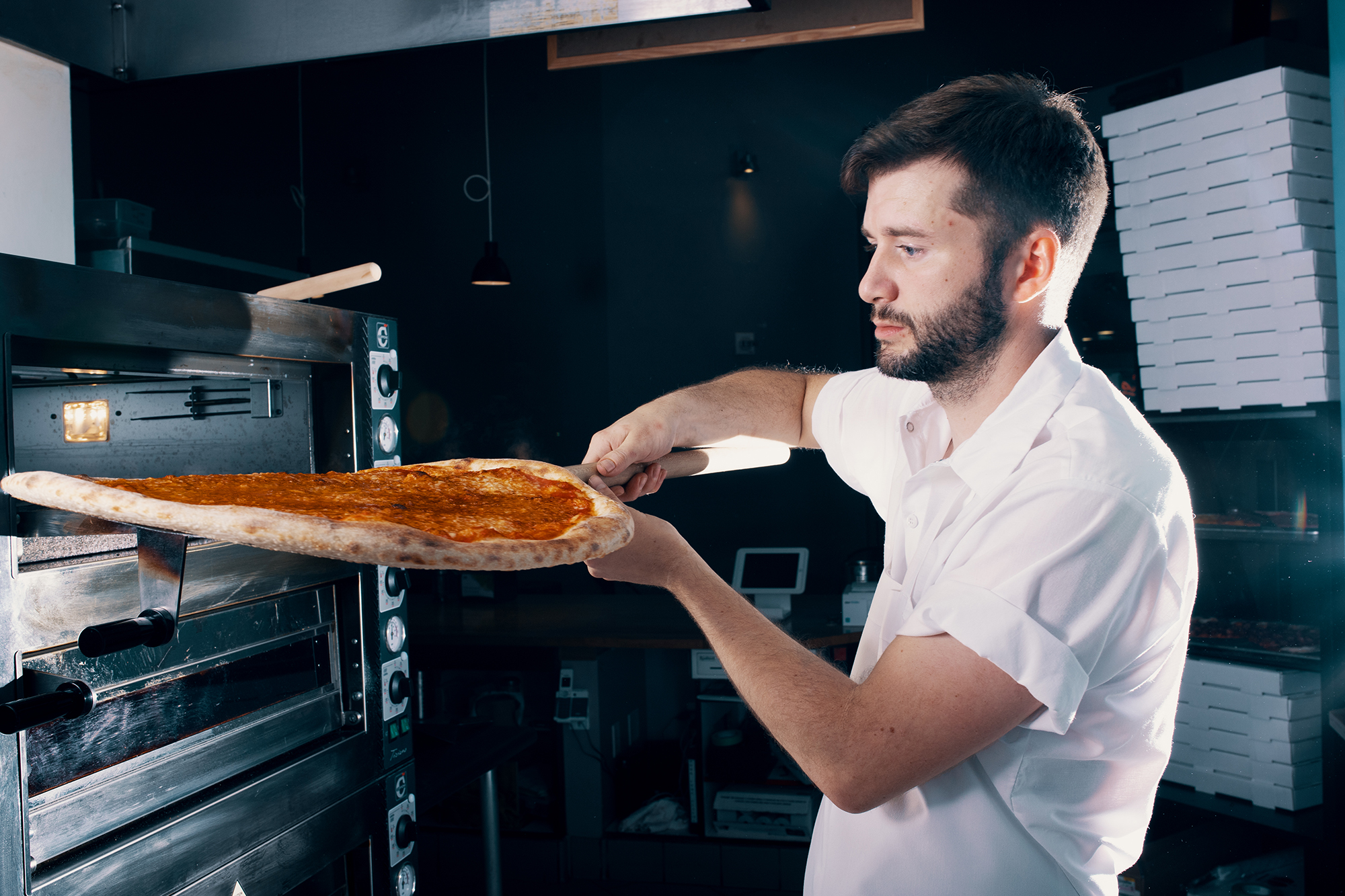 Ben and Pembe envisioned opening a pizza place at 19th and I, before it became The Mill. The owners, Nick and Isla Cookston, were friends. Every day before his shift at Ella, Roberts would get a cappuccino at The Mill and talk across the counter to the Cookstons about his pizza pipe dreams.

As a joke, Roberts manifested his destiny by starting an Instagram. He wanted to see if he could market something without a product. His first choice, Pizza Good, was taken. So was Pizza God. So he compromised: Pizza Supreme Being. He designed punk-rock inspired fliers and merchandise with pizza on them and built up a cult following.

Roberts and Nick Cookston wanted to build their own wood fired pizza oven trailer, but quickly realized it was beyond their capabilities. So Roberts commissioned the trailer using the money from his Supreme Being sales, and in September 2015, Olive the Oven was born. And so was a catering company. They’d serve weddings and parties, as well as biweekly pop-ups on the back patio of The Mill. Sonmez-Roberts, who studied English at Davis, handled all the marketing, web copy and design work, in addition to pitching in with the pizza cart part.

The goal was always to open their own shop, but first they had to put some skin in the game.

“For a long time it’s just like, ‘I make this beautiful pizza,’ but when you negotiate with landlords they just want to know if you’re going to be able to make your rent on time,” Roberts explained. “You have to put yourself out there and show it’s more than just pizza. We had to prove value not only to ourselves, but to everyone else.”

Four years later, Roberts got a call from Ed Roarke, owner of Magpie Cafe. Ben and Ed had worked together at Art Street, and Roarke wanted to give up his bakery on 14th Street to focus more on Magpie. Ben and Pembe submitted a business plan, and within a month they had the keys to their own shop. After a few months of work, they were open for business—four walls and four energy-efficient electric ovens. 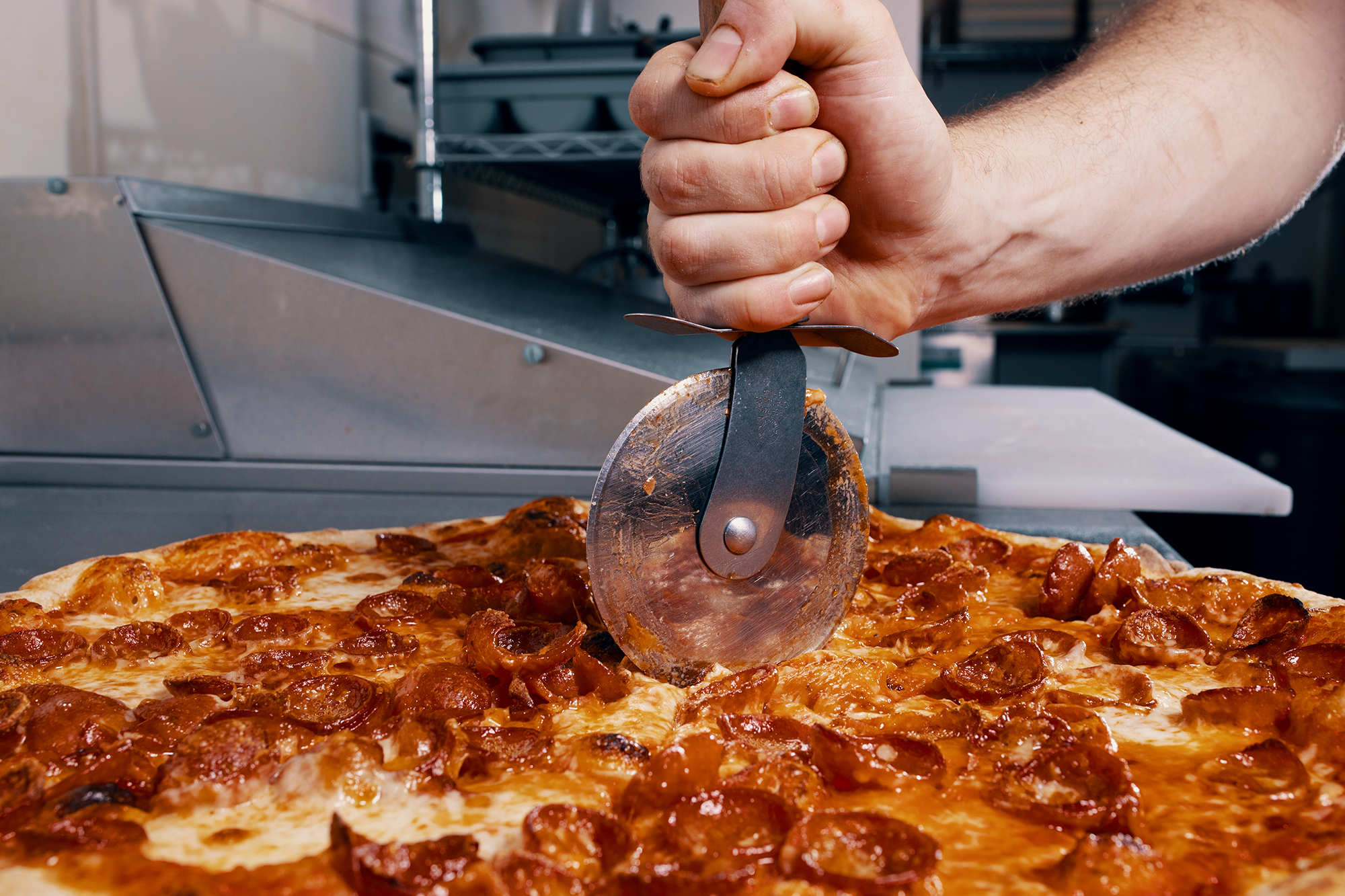 On the back counter sits a bucket of sourdough starter. Milled whole grain wheat is shipped from Nevada City. All of their dough is made from scratch, naturally leavened, with no commercialized yeast.

“Naturally leavened dough is really important. It’s really easy on your stomach. A lot of people eat pizza and say, ‘The gluten hurts my stomach,’” Roberts explained. “They’ve eaten dough with yeast that wasn’t fully processed or didn’t ferment long enough. So the yeast starts to activate against the warmth in your stomach and expand. That’s why you feel bloated after you eat crummy pizza.”

They use a three-cheese blend—provolone and hand-pulled in-house whole milk mozzarella, both from Wisconsin. The third cheese is Midnight Moon, a gouda from Cypress Grove that Roberts first discovered from Ella’s cheese board.

“It has these little granules of salt in it and a very caramelly, nutty taste,” he said. “I fell in love with it. It’s the curve ball.”

It’s all tied together with locally grown, USDA organic Bianco DiNapoli tomato sauce. “Working for Randall [Selland], it’s beaten into your brain to be able to tell people you’re serving where every element is from,” Roberts said. “We don’t want stuff to be coming off a semi-truck frozen pre-made.”

That includes their from-scratch ranch dressing, their vegan cheese (a faux ricotta made from tofu) and vegan pepperoni (made from beets).

It’s a simple, In-N-Out-inspired menu. There’s a wedge salad. There’s coffee from the Mill. And there’s pizza—slices and squares. Though “supreme” is in the name, there are only a few toppings.
“I have a theory that the minute you put more than three ingredients on pizza you’re, basically putting a salad on soggy bread, because your dough will not crisp,” Roberts said.

Preach.
You heard it here first: It’s the best pizza in Sacramento.

Pizza Supreme Being is located at 1425 14th St., Sacramento. For more info, go to Pizzasupremebeing.com.