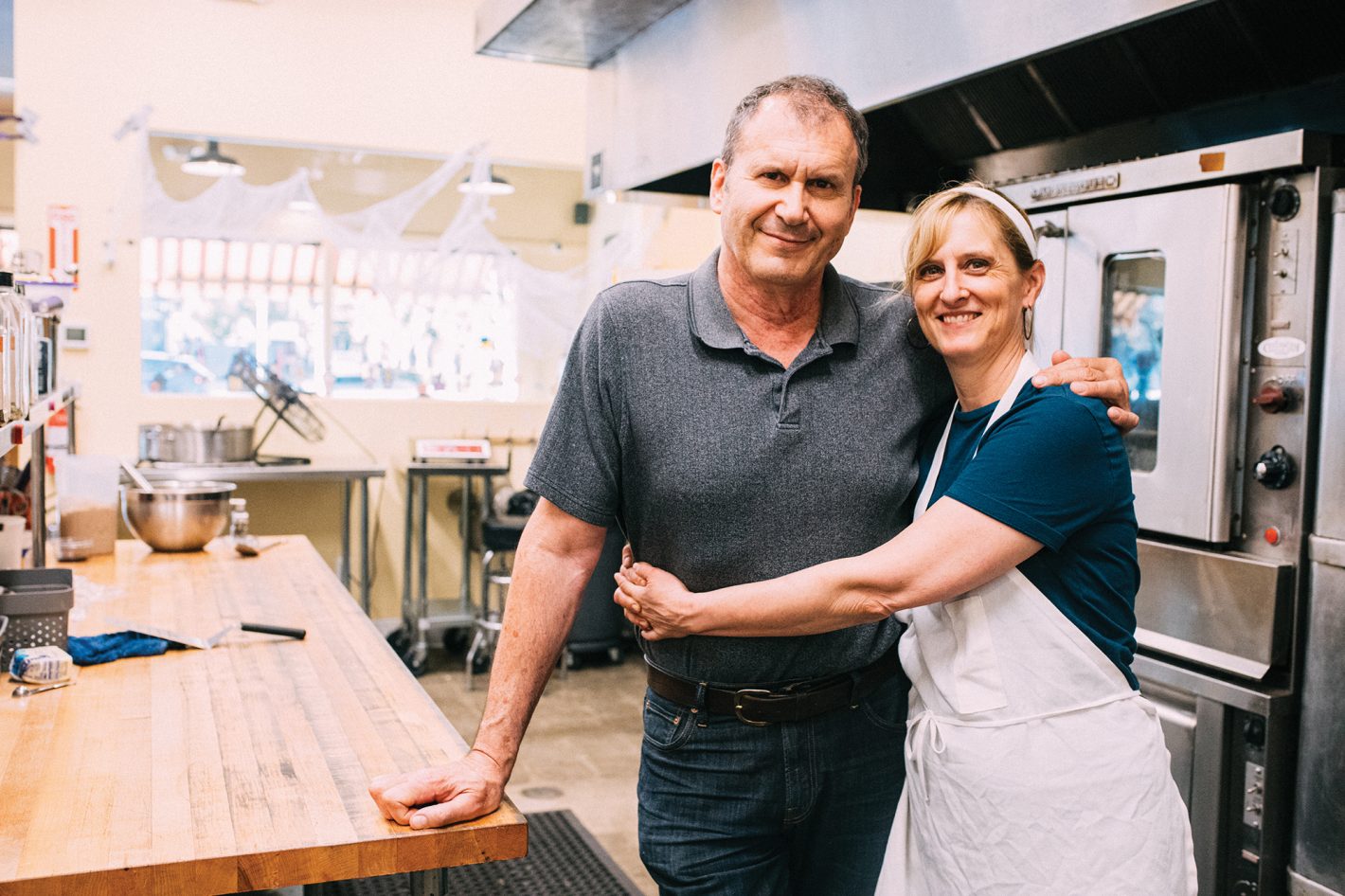 Though Real Pie Company sits on 24th and Broadway in Sacramento, husband and wife team and owners Kira O’Donnell Babich and Fred Babich have created a space that transports you from the lively streets of Broadway to a comforting, cozy pie shop. You’re welcomed with the sights and sounds of a bustling open kitchen, smells of baked berry pies and multilayered cakes as you hear customers greeting each other.

“We were so warmly welcomed by Curtis Park, Oak Park and Land Park,” said Kira. “We feel blessed; we’ve had a lot of support.”

Real Pie Company returns the support by making it a point to stay local when buying supplies for their pies and other baked goods.

“We buy almost all of our fruit from the local farmer’s market. We sort of just go and check it out, see what’s there,” said Kira. “We want to support sustainable farms when we can. We go to the farmer’s market with an eye out for whatever looks amazing that week.”

“We’re so lucky because our middle menu changes all the time,” continued Kira. “It’s completely capricious, so when we get new stuff in, we just pull it down and rewrite it. It gives us the ability to be creative and to use whatever beautiful produce we happen to bring in or what someone brings in for us.”

I caught up with the owners of Real Pie Company just in time for the holiday season and learned how a commercial helicopter pilot and a former Chez Panisse pastry chef shared the same dream of wanting to be in the dessert business and how they made it happen. 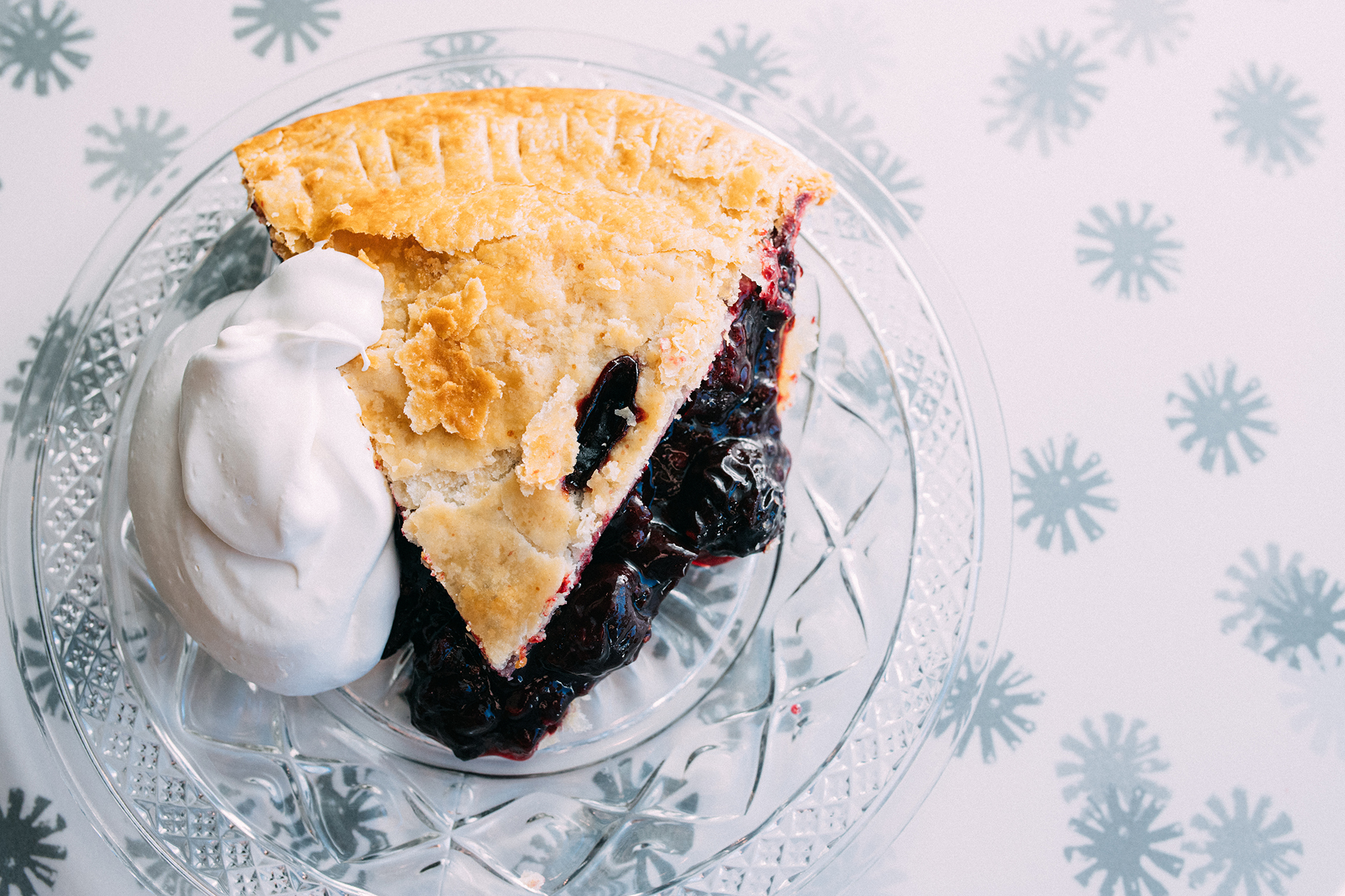 When did you first become interested in becoming a baker?
Kira O’Donnell Babich: My grandparents had a farm up in Humboldt County. My grandma was an amazing pie baker, and that was a big deal in our family; we had it for breakfast, lunch and dinner.

Did your grandma have a signature pie?
KOB: If you’ve been up to Humboldt County, they have beautiful wild blackberries; they’re so succulent and amazing up there, so that was kind of her main pie. My grandpa was a lumberjack and he just had one arm. He used to wire a coffee can to his belt and we used to have contests in the wild blackberry patches. He would always pick more berries than me! We used to see the berries go from grandpa’s coffee can into grandma’s pies. For me, that was super meaningful. Going to their house on holidays and in the summertime was the highlight of my childhood, and to this day, wild blackberries are probably my favorite fruit.

And from that point on, you wanted to open a pie shop?
KOB: It had just been a nagging, gnawing dream of mine for pretty much my whole life, since I was a little kid on my grandma’s farm. I don’t know why, but it just kept haunting me and wouldn’t go away. Finally, my ex-husband said, “Just do it, and get it out of your system. Either it works or it doesn’t, but at least you did it.”

That’s when you opened your first pie shop across town, but you closed your doors about a year in?
KOB: That place was doing great. We had been open for a year, we were selling out. But my kids were really small and it was all-consuming. I got a phone call from my daughter’s kindergarten teacher and she said, “I just want you to know, your daughter came into school today and said, ‘My mommy doesn’t live at home anymore. She lives in a pie shop.’” So a year after just busting serious ass and building the business, we closed everything down, which was probably the hardest decision of my life. 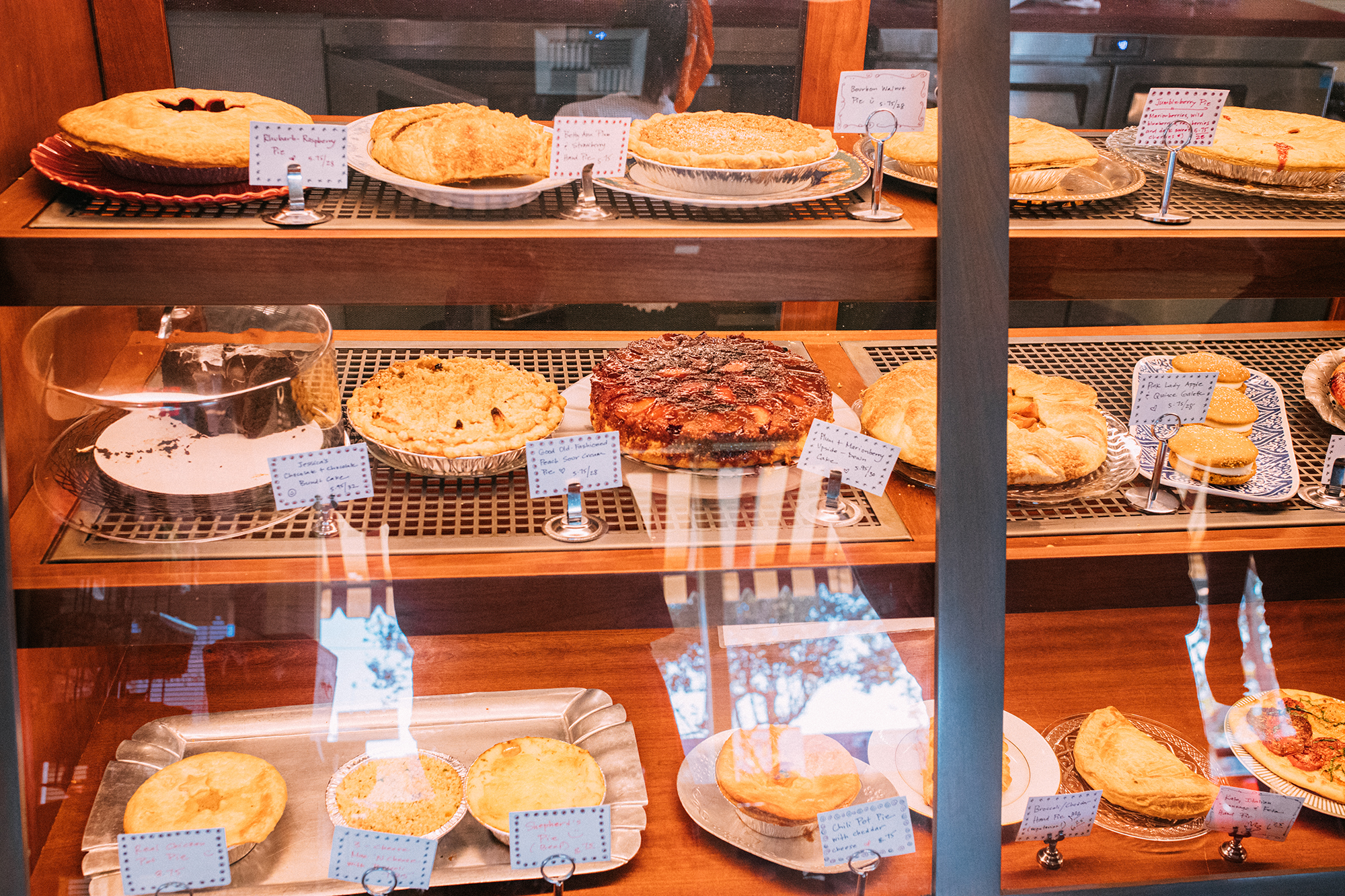 How did that experience help when opening this location?
KOB: It turned out to be a fabulous training ground. I had a great staff, I made a ton of mistakes and learned from them. By the time I went to open this place, I knew that I had stumbled and fallen, but I knew what happens and what was needed. What kind of staff I’ll need, what kind of layout I’ll need, what kind of equipment I’ll need.

Fred, how did you become interested in owning a pie shop?
Fred Babich: I always wanted to open up a dessert shop at some point in time in my life. I always said, “someday,” not knowing when it would be or how it would happen. It was something that I always kept inside when I was on my journey in life. I just always knew, somewhere down the road, when I’m through with everything else, I wanted to open a dessert shop, but I never really shared that with very many people.

Where do you think wanting to own a dessert shop came from?
FB: My family. My parents were first generation Americans. My mom’s side is Arabic, she’s Syrian, my dad is Russian and they were all foodies. I remember the food, the gatherings, the desserts, the pastries.

Kira, how did you decide it was time to get back into the pie business?
KOB: This pie shop would have never happened, if he [Fred] didn’t have … when he was at the hangar he had an accident with one of the helicopter blades which ripped all of the muscles off of his shoulder. So he was out for almost a year rehabbing from surgery. I had wanted to reopen my pie shop; it was a dream of mine, but I didn’t think it was ever going to happen. So he said, you know, “I got this time off, let’s just do a business plan and see if it would work.”
FB: Having that year off allowed me to really dig into the business plan. Once I put the pencil to the paper I thought, “Yeah, we can do this.” We are doing this at the start of the back end of our lives rather than being in our twenties or thirties, so we did a lot of our living ahead of time. Now, working 12 and 14 hour days, we know it’s going to be this. Plus, I’m not good with boredom.

Kira, how did working at Chez Panisse help you prepare for owning your own bakery?
KOB: I was there in ‘93, ‘94, but when we were building this place out I was feeling frustrated because it was taking so long, so I called them [Chez Panisse] and I asked, “Can I come back?” so I ended up working there again the last nine months before opening this place.

While getting the new location ready?
KOB: While setting this place up. I was going down on the weekends and coming back up during the week. Just because I needed the inspiration, and it really did reinspire me.

Does it get crazy around here during the holidays?
KOB: We have pre-orders coming in already. We have six pies that are available the Wednesday before Thanksgiving and people are already ordering them. We’ll still be open for business that Wednesday, but a lot of it is going to be pre-orders.
FB: This year, we’re also offering the option for people to buy frozen pies that they can take home and bake in their own oven, which they can purchase any time prior to Thanksgiving.

What are some of your favorite seasonal pies?
KOB: We have a pie called the Cazuela. Around this time every year, we start getting phone call after phone call asking about it. It’s kind of our version of a pumpkin pie with roasted sweet potato, pumpkin and coconut milk. It’s a very laborious pie so we don’t have it that often, but it’s a huge customer favorite. When Meyer lemons are in season, we do a Shaker pie that’s like a lemon bomb. It’s like a lemon explosion in your mouth. It is the purest, most vibrant lemon thing I can imagine eating.

It doesn’t sound like you are interested in cutting corners when it comes to pie.
KOB: One of the things I learned when I opened this bakery is that a lot of people have moved towards convenience. We juice our lemons; we make our curd every day. It’s old school here; our butterscotch is old school. We’re back there caramelizing brown sugar and pushing it until its smoking to give it that almost bitter, earthy edge. It’s family, it’s love, it’s comfort. 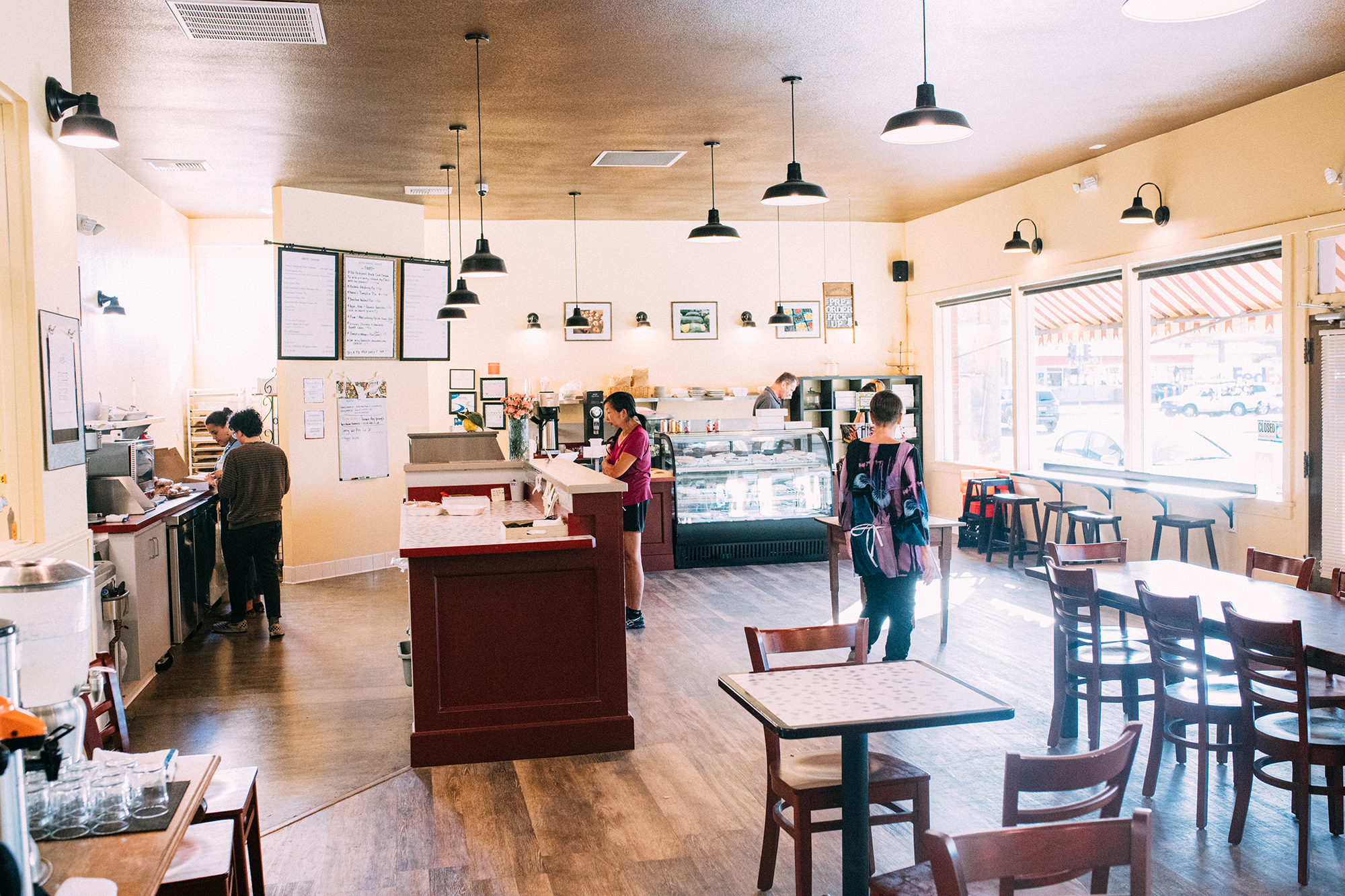