I swung by Rubicon on Capitol and 20th around 3 p.m. to shoot the breeze with Scott Cramlet, brewmaster since 1990. Not quite happy hour, not quite the lunch rush, the patio remained lively as were the tables inside. The bartender Summer Quinn offered water or coffee. I must have looked like I needed freshening up. Two glasses of water deep when Scott sat down at the bar with me, an unspoken short pour of IPA was placed in front of him as he asked if I wanted a pint. I graciously accepted, requesting a Rosebud and used my choice as a transition into a curiosity I’d had since I first tasted the hoppy red ale, “Is the name a Citizen Kane reference?”

“It has nothing to do with sleds or strike anywhere matches,” Cramlet said.

Rosebud Red Ale was born on Aug. 9, 1995, a day that causes great sadness among Grateful Deadheads. Cramlet was in the brewery with the task of brewing a style he cannot recall. He got the news of Jerry’s passing and got inspired to improvise a brew. Named after one of Jerry’s guitars with a mother of pearl inlay, drink a Rosebud with this knowledge and taste the divine tribute. “It’s a little bit different every year,” Cramlet said. “The recipe changes, but it’s good. The little tweaks; the analogy I make is much like the Grateful Dead they have their repertoire of songs and yet you recognize that song you’ve heard before, but they’ll play it a little bit different this time.” It should also be noted that Summer the bartender painted the replica guitar neck tap handle. 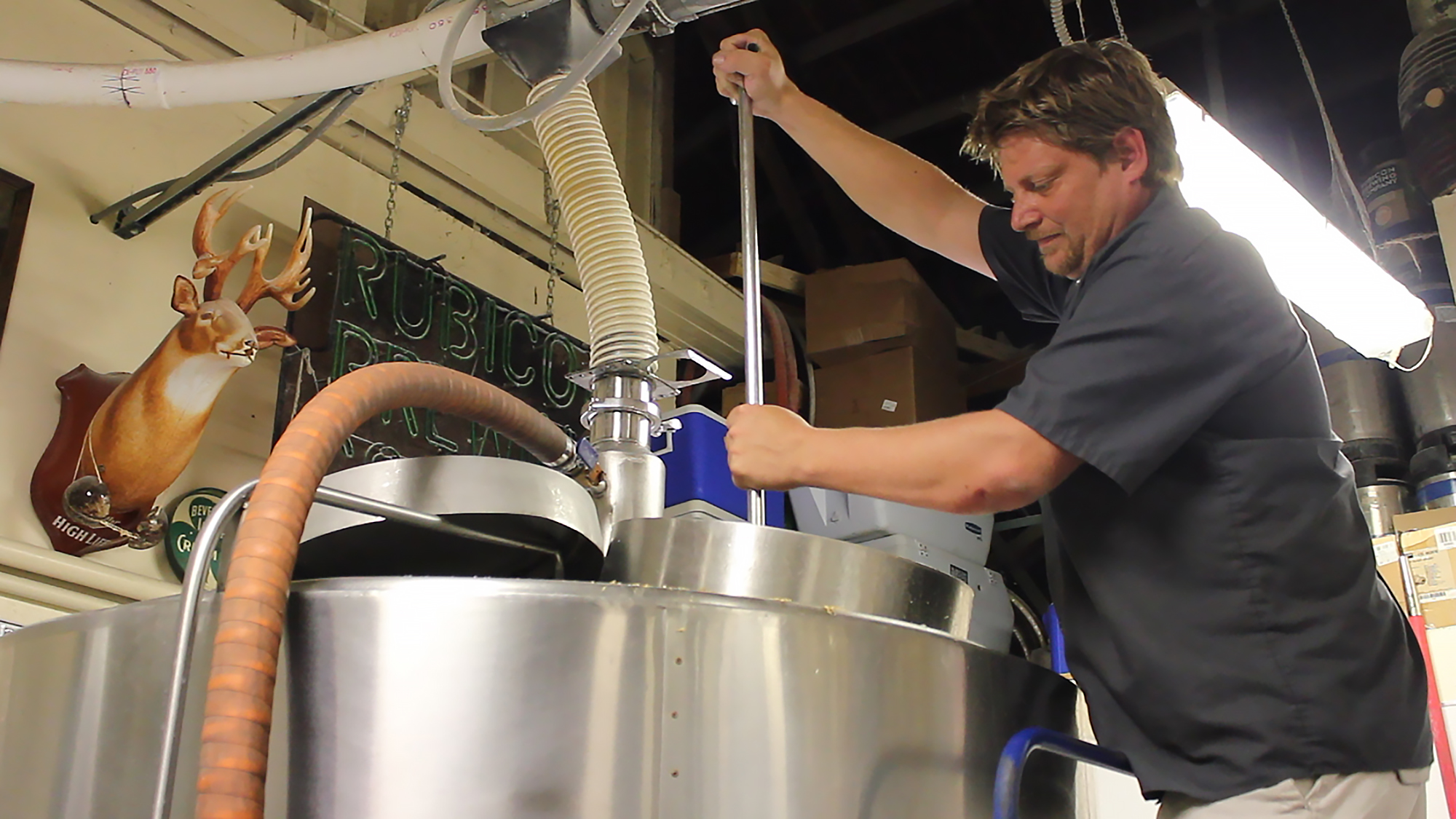 When Rubicon opened on Nov. 1, 1987 one other brewery existed in Midtown–Hog’s Head, which opened July 1986. Cramlet was graduating high school. Do the math in years and it’s puzzling how Cramlet got the job with the brewery without being legally allowed to drink.

“I was one of those guys that started home brewing before I legally should have,” he said. “You can buy malt and hop, combine it with water. You can buy a book on home brewing and teach yourself how to do it, despite your parent’s wishes or the government’s admonishments not to do it.”

He gained the company of the Local Home Brew Club and original Rubicon brewer Phil Moeller took a liking to Cramlet at a camp getaway. A week later, at the age of 22, Cramlet became Moeller’s understudy. “I wasn’t looking for the job,” he said. “I literally got the angel’s tap on the shoulder.”

Beyond its taste and after-effects, Cramlet began brewing for its combination of art and science. “There’s a lot of creativity and artistic input for making beer,” he said. “But there’s also the science behind it, the microbiology and chemistry that make it happen.”

Moeller’s legacy though rests on the full body blending called wheatwine. The conceit was a barleywine with enough wheat to push the flavor without compromising the ABV (alcohol by volume). The Winter Wheatwine won gold at the Great American Beer Festival in 2006. Many of the signature brews were in place before Cramlet came on; think of his job as a guard of a holy grail. “I inherited the legacy,” he said. “Even though the brewery was only open for three and a half years. I inherited the foundation and we really haven’t messed with it. I’m the caretaker from what was started.”

Cramlet’s first batch to call his own was a Scotch ale he called Scott’s Ale, so people would know it was his. A few years later, it was a German Alt Beer he dubbed Scottmeister Alt. When he took over, he quit putting his name on his batches. With several brewers under his liege, he does not stifle their creativity. The Capricorn Black currently on the menu is a homebrew from Al Griffin they’ve added to their repertoire. Cramlet said, “You guard the legend, but it doesn’t mean you don’t carve your initials underneath where no one can see. All my brewers have had a chance to put their thumb into the equation and contribute.”

The Monkey Knife Fight Pale Ale is one of Rubicon’s most widely distributed additions to the family, despite only having brewed 250 batches to date. Cramlet refers to it as the new pretty boy in the bar. There was only one disappointment when discussing the Monkey Knife Fight: there have been no monkey knife fights in the brewery, not in the back of the house nor the front of the house. “There was a reference in an episode of The Simpsons when Homer was out on a ship,” he said. “He was betting on monkey knife fights. Classic cartoon comedy. I don’t know exactly how we grabbed that name, it’s just funny sounding.”

The workhorse in the bar is the IPA, brewed since 1988 and in its 1500th batch (one batch is 310 gallons or 2,400 pints). For Cramlet, brewing beer is the result of practice, and he’s had plenty of it. Their beer logs consist of 13 binders, three inches thick of hand written notes. Scott said they will brew their 3,000th batch as soon as the logs come up on 3,000 pages deep. “I’m not any smarter or any better than a lot of [home brewers],” he said. “But when it comes to brewing Rubicon beer…yeah, I got that.” 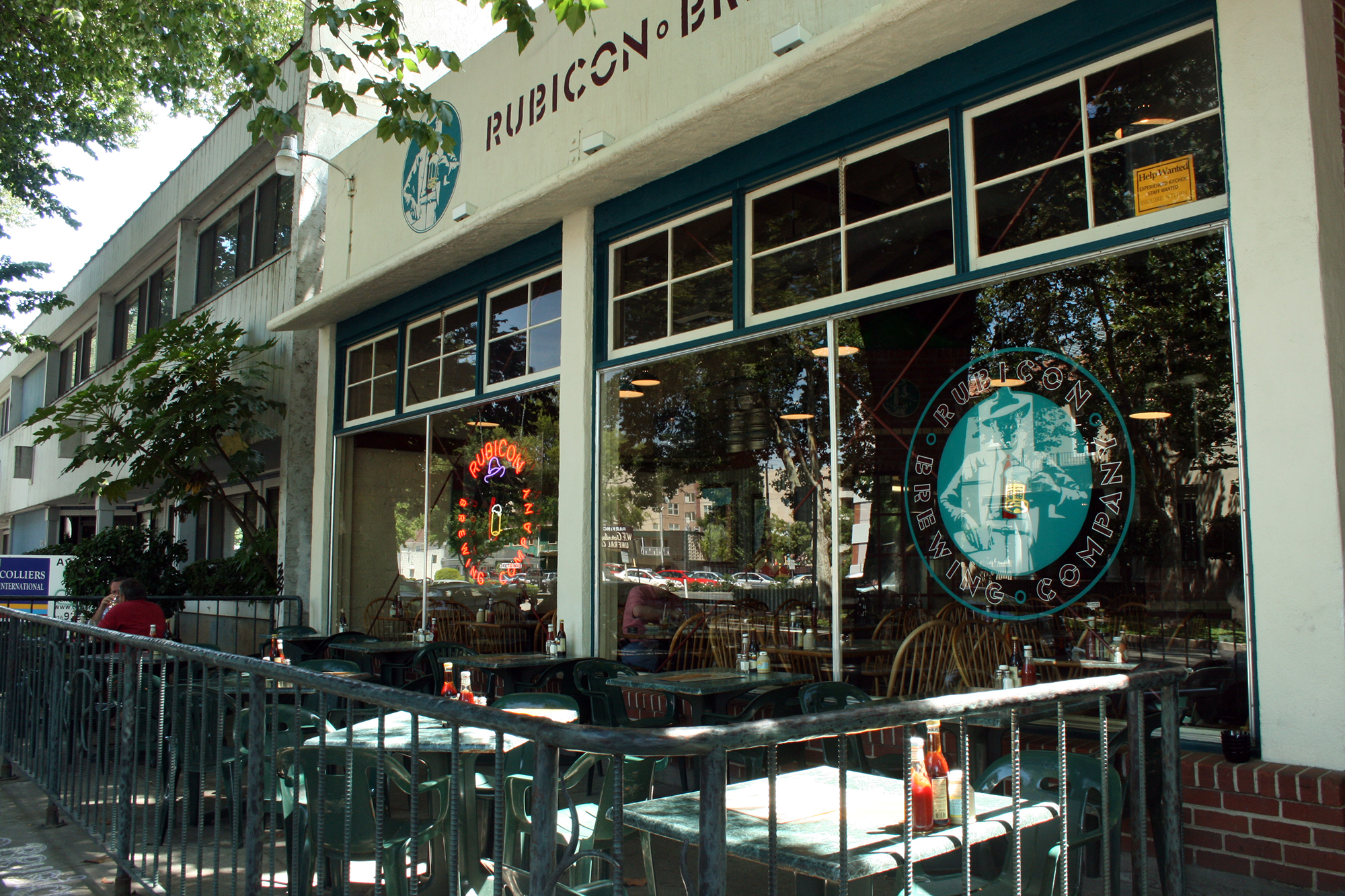 Giving craft beer lovers a balanced and consistent brew, satisfying in hops without risking alienation, won Rubicon a prize more valuable than gold and silver medals–regulars. An institution on Tuesday nights is Ground Chuck, who Cramlet joked was there even before they opened in 1997. “I think Ground Chuck started coming in 1790,” he said. “He’s been reborn several times. Who knows when the spirit of Ground Chuck first came through?”

Call it a hunch, but I think Ground Chuck will be at Grateful Dead Night on the debut evening of Rubicon’s 25th anniversary week parties. The night is in honor of an early tradition at the brewery. Every Monday night, they would turn the lights lower and patrons would bring their Dead tapes to play on a cassette player behind the bar. Whoever brought in the best bootleg show earned a free pint. The original Monday night bartender, Vincent Stern, a big Deadhead and owner of Two Rivers Hard Cider, will be guest bartending his old shift, although no one has a cassette player anymore. “We’re going to find a way to spin some Dead tunes…go a little retro,” Cramlet said. “We’ll see how loud we can turn the music up.”

Cramlet is nearly ready to debut the Rubicon 25th Anniversary Ale as well. It is a single malt, single hop IPA, being that the IPA is the beer that got them to 25 years. “Let’s just make an IPA featuring cascade hops,” he said. “Keep the hops featured by using a two-row barley malt, not a lot of body to the beer, the malt character is relatively light so the hops can shine through, and 7.3 alcohol to make it bigger for celebration. We didn’t want a head-crusher. Light in character but screaming with cascade flavor and aroma. I just had a taste of it this morning, and it’s coming along. Something special but something simple.”

Along with a big week of celebrating, Rubicon announced plans to expand the manufacturing and distribution side of the company to fix the dilemma of not being able to make enough. They purchased a facility in West Sacramento strictly for production–sorry, no tasting–in brewing, bottling and kegging. It will give Cramlet space for 13 more binders of beer logs.

“Capitol Avenue is a vibrant corner now, but at the time it was just Java City down the street,” he said. “It used to be dive bars down here and us. In the early days it was kind of pioneering. Now there’s excitement again. Small breweries coming in like nano breweries and tasting rooms. It’s a very exciting time.”

Rubicon’s 25th anniversary week-long celebration kicks off Monday, Oct. 29, 2012 with Grateful Dead night with events continuing throughout the week. Go to http://www.rubiconbrewing.com/ to get the full rundown!