It has been said that some of the best food can be found in “hole-in-the-wall” spots that offer little more than, well, the food itself. These low-key dining establishments typically boast bare-bones interiors and a penchant for serving up dishes that keep its patrons coming back, again, and again, and again. The latest eatery to adopt this philosophy is Sampino’s Comida del Pueblo, a small restaurant in a midtown strip mall.

Serving up a fiesta for the belly that even Lucha Libre would appreciate, you won’t find anything but simply prepared Mexican fare at Comida del Pueblo—no Asian, or even Italian mash-ups here, the latter of which one might suspect since the joint is operated by Gabriela Sampino, the daughter-in-law of Bill Sampino who owns an Italian delicatessen, Sampino’s Towne Foods, next door. 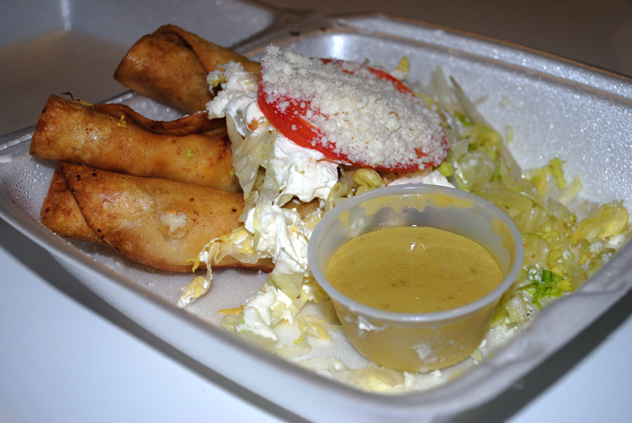 As simple as the food is, the interior space one-ups the no-fuss, no-muss philosophy of the menu. You won’t find any indoor seating in what is more of a hallway than a dining room, and residing outside of its modest confines, a small, solitary table where one lucky diner, or two depending on how big the meal is, can enjoy the fruits of Sampino’s labor. While Comida del Pueblo is more of a takeout spot than a full-fledged eatery, don’t be fooled by the white Styrofoam vessels, the food is legit.

Entering the long narrow passageway that is the main ordering area, the aroma of freshly made tortillas greets each guest like a warm hug. For being new to the game, and operating in an extremely tight work space, the staff seems to have their service routine on lock—on a recent visit during the afternoon lunch rush, the food came out of the small kitchen quickly, but not too fast to suggest that the goods weren’t being prepared to order. 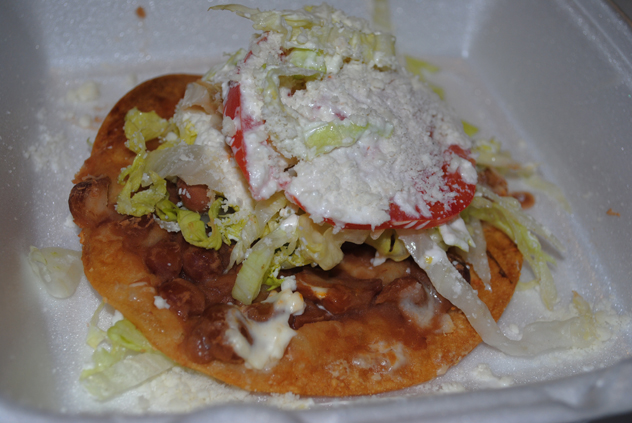 Speaking of the goods, while the menu features classic and familiar dishes, each dish I experienced—and mind you, I went in on a serious Mexican-food binge in order to provide a robust commentary on the food here—had a distinct flavor and freshness that is atypical of quick-serve Mexican joints. The menu includes several prepared items that are served from the hot display case dripping with steam from the fresh tamales and roasted chicken.

Now, the reason I let loose my inner fat kid to experience all that Comida del Pueblo has to offer is simply because of the ridiculously low price point of the a la carte section of the menu—$1.65 to $3.25. With prices like this, it made my insanely large and gluttonous order necessary: three tacos, two tamales, six flautas (because I had to try both the chicken and potato, right?), a bean tostada and two burritos. OK, full disclosure; I did share each item with a dining partner-in-crime.

The true test of a Mexican restaurant has got to be its carnitas, that quintessential Mexican dish boasting tender, porky goodness. Happily, Comida del Pueblo’s offering did not disappoint. We went for the tacos instead of the combination plate, just to keep our guts in check in preparation of the mountain of food we were about to consume. The tender meat was moist and adorned with those trademark—and very necessary—crispy tendrils and piled atop a duo of mini corn tortillas. 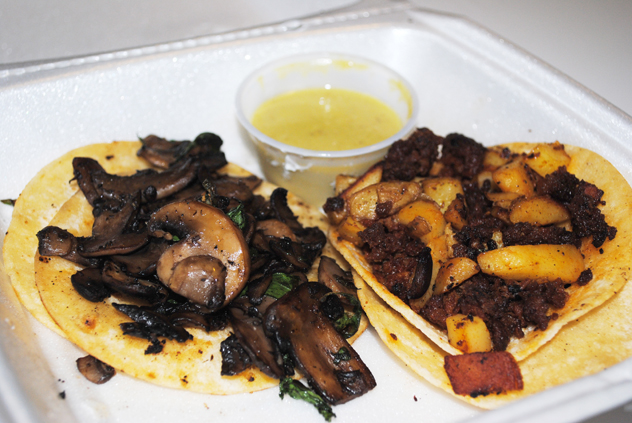 The next items on order: the taco course, as I like to call it. The chorizo and potato tacos garnered rave reviews from my dining companion, and I couldn’t agree with the assessment more: the tender Mexican-style chorizo was in perfect harmony with its companion of crispy potato cubes. The chorizo held the perfect level of spice, while the potatoes added a nice, surprising texture and bite next to the tender crumbles of pork cheek.

The mushroom taco was another delightful surprise. For those who have given up the flesh, well, animal flesh—that is, the mushrooms were hearty enough to satisfy the most devout carnivore. An earthy, simple preparation of sautéed mushrooms accompanied by a smattering of cilantro provided the perfect veggie-fied counter to our meat-laden feast. Again, like the carnitas, chorizo and potato tacos, the mini corn tortilla played host to the main attraction.

The taco course was concluded, and most gloriously so, with a crispy-shelled taco that cradled a mound of shredded chicken sprinkled with a confetti of crispy iceberg lettuce and Cotija cheese. While the perfectly crispy taco shell was a nice change-up from the previous soft-shelled tacos, the star of this show was the chicken itself. Bathed in a restrained sauce of chipotle peppers in adobo, the chicken was a smoky compliment to the tangy cheese.

The potato flautas, while providing a nice intermission between the taco and tamale course, fell a little flat, but only because the potato innards were subtly seasoned, which we surmised to be because of the richness of its toppings: a thick swath of Mexican crema and Cotija cheese. Luckily, the salsas at Comida del Pueblo, which are served with just about every a la carte item, provide a punchy wallop of flavor and spice. A word to the timid, however, the salsas are not for the faint of tongue. 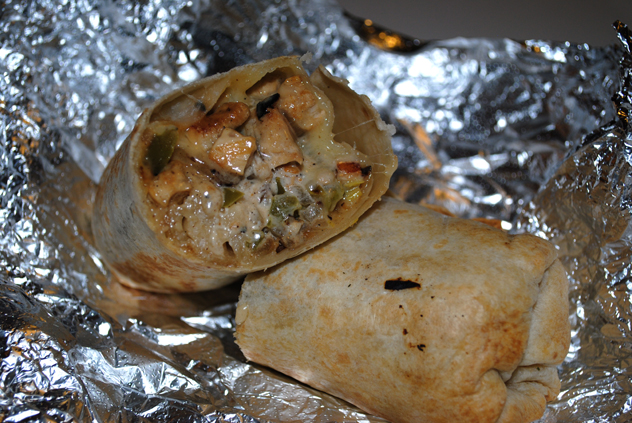 With our bellies filled, we trudged onward—note: it is possible to develop a food high. Trust. The tamales weren’t overly stuffed, much to the chagrin of my companion, but were nestled in the most delicate and airy masa cocoon I have ever experienced. The burritos, however, were gargantuan in size and I could only muster a couple of bites of the cheesy, tender grilled chicken and pepper offering.

In total, while Sampino’s Comida del Pueblo has only been open since September 2013, it’s well worth checking out. It’s easy on the pocket and offers a simple and fresh take on the old Mexican standby. Just be sure to get there before 5 p.m., because they don’t do dinner.