Not All Those Who Wander Are Lost

When New York City Mayor Michael Bloomberg started grinding his political ax against the soft drink industry and its so-called promotion of Big Gulp-sized sodas, the sugary libation was instantly vilified as the root cause of all that is unhealthy in the United States.

While Bloomberg’s ban fizzled out, courtesy of a judge’s overruling of the law just one day before it was set to take hold of New York soda lovers, the debate continues across the nation, but for two locals—a microbiologist previously with Genentech, Srijun Srinuanchan, and a former corporate sales representative, Payam Fardanesh, turned natural soda makers—it’s really as simple as the old adage: everything in moderation.

“Soda is a treat. It has sugar, but our soda is at least made with good stuff. It’s made with real sugar. It’s organic and there are no chemicals, so it’s good as it can be for a soda,” Srinuanchan says. “And, again, it’s a treat. It’s like having a slice of chocolate cake. Sure you can make chocolate cake healthy but that takes the fun out of it.”

For the business partners, who formed a close friendship while engaging in one of their shared passions—traveling the world, the experience of launching Silk Road Soda Company, Inc. has been a dizzyingly meteoric enterprise, they say. It was only about a year ago that the two made the decision to set out and make their entrepreneurial dreams come true with their organic, Iranian-inspired sodas.

“It’s been unreal,” Srinuanchan says. “We can’t believe the level of support we’ve received from everyone.”

It was their love of travel and appreciation for different cultures that inspired their soda creations, even the name of the company, taken from the Silk Road trade route that existed centuries ago, exemplifies their passion—Fardanesh spent his early childhood in his native Tehran, Iran, while Srinuanchan’s Laotian and Taiwanese roots drive his creative pursuits.

When the duo decided to share their cultural experiences through soda, they took to Srinuanchan’s Del Paso Heights kitchen, turning it into a lab of sorts and, drawing on his experience at Genentech, worked on the formula until it was perfected. Although they started with 10 potential flavors, the partners settled on three; mint, cucumber-mint and pomegranate-mint, but say to look out for some of the seven remaining flavors to hit the shelves in the future.

The duo then worked with a food lab in Santa Cruz, Calif., Venus Research and Development, where the formula was perfected for mass production and, most importantly, to obtain organic certification.

“Sharing a little bit of the Eastern culture with the West was kind of cool to us,” Fardanesh says. “We wanted to represent the region that [these flavors] originated in so, for instance, the gold flavor is exactly the way my grandmother made it, so it’s her recipe. Now, we had to alter the recipe some so we could lower the calorie count and get it up to organic standards.”

“From there we went to the cucumber mint; in Iran and in Greece cucumber is shaved into the drink,” Fardanesh continues. “With the pomegranate, it’s really popular in the region. In Iran people eat pomegranates like apples, so it seemed natural.”

Manufactured in Sonoma County in the sleepy town of Healdsburg, the nearest facility that could produce their product at the level they aspired, and where they could also pasteurize the drink—meaning no preservatives were added, and in the soda business that’s basically unheard of, they say.

“That in a soda pop, in and of itself, is like whack-o. It’s just not what people do,” Fardanesh says. “Soda pop companies add preservatives so they can bottle [en masse] and keep it shelf stable, but we decided we wanted to keep it pure and use a pasteurization process, and it was expensive, but the markets reacted and understood.” 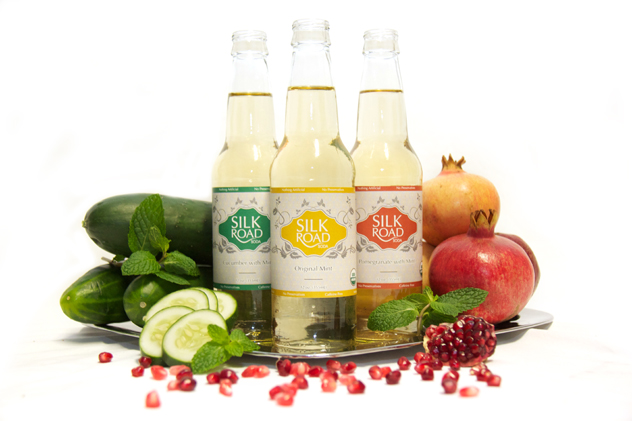 “Any food, actually,” Srinuanchan adds. “Even potato chips, or even candy bars, anything packaged, most of those items have preservatives, some chemical to keep it from rotting and our product doesn’t have any of that.”

The partners say their decision to use pasteurization methods over preservatives account for the price tag of $1.99 and up, depending on different retailers and restaurants.

For the two enterprising men, their success has been rooted in a community that is eager to see them succeed. From former classmates in their MBA program pitching in on the bottle design to random strangers on their Facebook page, they say community support has far exceeded their wildest expectations.

“The top restaurateurs in town, Pat Mulvaney for instance, tasted our product. You know, we didn’t even know him, and he was very interested and very supportive,” Fardanesh says. “We’re two guys basically selling our drinks out of our truck, literally. When you drive up and pull it out of your trunk, it’s kind of Ben and Jerry-ish.”

Not bad for a couple of thirty-something’s selling a homemade soda out of the trunk of their car, concocted in their kitchen.

Based on a decision to keep the product organic versus local, most of the soda company’s ingredients are sourced from Southern California, Oregon (verbena) and even Florida, via a distribution company in Southern California (cucumber). The two plan on meeting with flavor consultants once again to look through each component in their products to see if they’re doing it right. For them, keeping the integrity of the ingredients is paramount.

Although the company is currently a two-man operation, they say through the community’s support it feels like they have 100 employees. Fardanesh and Srinuanchan are looking forward to taking their product nationally, but not too hastily.

“We want to create a brand identity. We want to make sure people like it, and both of those things are happening, so we think the next area will be San Francisco,” Fardanesh says. “It’s our baby, so we want to watch it while it grows, and we’ve already gotten inquiries from New York and Los Angeles, but we don’t want to stretch it out too far yet.”

“We’d love to go national, but we don’t want to bite off more than we can chew,” Srinuanchan adds.

For those on the Bloomberg soda ban-bandwagon, the soda makers say not all sodas are built alike, but again, moderation is the key.

“I even tell people don’t drink more than one a day, but there’s a cleanliness to it because of the ingredients we use; on the back end is apple cider and white vinegar,” Fardanesh says. “So those are things that aren’t in soda pop. We were even having trouble naming it; is it a soda pop or is it a tea with sugar in it? It’s kind of a tea, soda pop and Kombucha, all mixed into one—it’s from the Mediterranean diet, which the world covets being super healthy, but if you’re diabetic you shouldn’t be slamming them.”