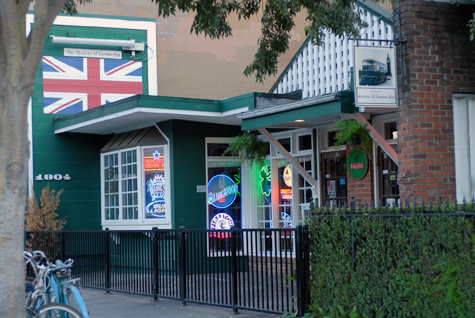 I love to gorge myself with food 100 times more when I’m drunk as opposed to when I’m high. I don’t know what it is, but I just don’t get the munchies like that; however, after two beers I’m eating whatever I can get my hands on. That being said, bar/pub food (there is a difference, as Streets of London will show) is one of my favorite indulgences because, well, if I’m eating it, I’m probably already happy. At any establishment that serves liquor, you can always find burgers, fries, nachos, nacho fries, fried chicken whatevers or mozzarella sticks, but for a seasoned bar stool eater this fare can be numbing. For this reason alone, many bar crawls have been planned around landing at Streets of London around dinner time or the fourth or fifth drink, whichever comes first. Later for the one sided menu with a handful of items, Streets has a five-pager boasting sandwiches, appetizers, soups and salads, entrees and most awesome, breakfast (which is served all day). It’s almost as if the drinks take a back seat to the loaded menu; it’s that good.

On my last trip to Streets on J St., I was joined by a couple friends who really opened the menu up to me. Half drunk, one friend was adamant about ordering the fried pickles. The idea itself sounded kind of disgusting, but my taste buds knew something my stomach didn’t. Those fuckers are amazingly good. Thinly sliced, similar to how fried zucchini is served, the pickles had an addictive buttery and bitter taste. The breading was crispy, but strangely the pickle itself maintained the champion of crunch. A cup of ranch was offered as a dipper, and while ranch can make anything better, it wasn’t necessary as the pickles had so many other flavors going on. Even the French guys next to us approved, and even after them everyone in our party got their fix in one plate.

The entrees followed, and since I was splitting a plate with the vegetarian, I had chosen the traditional fish and chips. It’s not the most vegetarian friendly menu. There is nothing more British than fish and chips, so it is expected Streets has a pretty good recipe. Each piece is pretty hearty, definitely one of the bigger single servings of fried cod I have seen, and paired with a large portion of fries there is no way you’ll be hungry afterward. The taste was great, but on this particular visit, the fish and fries were both a little soggy, but I would credit that to it being a busy Saturday evening. When it was all said and done, I was not mad at all. My face was a little greasy, but yo, I wasn’t trying to eat anytime soon. In short, two people got stuffed for under $10.

Bocephus was included in the party and sided with the sausage roll, which was described as “a British style banger wrapped in a puff pastry and baked.” I’m not schooled on the schnitzels or anything like that, so the sausage roll was a new concept to me. With one bite, I can testify that it was the truth. It was baked to perfection, flaky and sweet, and the banger balanced it all out with its juicy saltiness. Also served with a (un)healthy portion of fries (or chips, whichever) and baked beans, for $8.50 this was an undeniably successful choice. After I try all the curries and shepherd’s pie, I’m going to roll with the sausage roll.

The winner of the three dishes though was the homie Erik’s corned beef sandwich. It was unbelievably good. The corned beef was stacked almost 2 inches high between two slices of delicious rye. You have the option of a hot or cold sandwich, and while Erik rocked the hot, there is no way you could go wrong with the cold either. I’ve been to Katz’s Deli in New York, and I want to go on record and say that Streets of London’s corned beef could at the very least rival a Katz’s sandwich. Plain and simple, it was bomb.

In conclusion, bar food is played, hit up any of the three Streets of London spots and get down with some real pub grub. You can’t do wrong.