Throw a rock in any direction in Midtown, and you’ll unfailingly smash the window of a Thai restaurant. Prolific as the shitty romance novels of Danielle Steel, the abundance of Thai food is, however, welcomed by diners in Sacramento’s grub milieu.

A new Thai restaurant predictably became the successor in the vacant space that once housed failed endeavors Negril Island Grill and BBQ Spot at 2502 J Street. The newly opened business quickly garnered a wealth of positive online reviews, and I jumped at the chance to try it out and pen my own review for Submerge readers.

With a mad legit Thai establishment, Thai Basil, just a block away, I questioned how another Thai restaurant could thrive in a location that had the added difficulty of seeing one restaurant after another struggle and go under, and imagined that its fare must be pretty impressive to dare such proximal competition.

My coworker Haley and I ventured out on Halloween, in our Adventure Time Lumpy Space Princess and Princess Bubblegum costumes into the perfect, crisp fall weather of Halloween to verify if such was the case. Given our garb, we were greeted with sideways glances, albeit friendliness.

The specials board by the front door rendered us both instant Pavlovian dogs with saliva-inducing dishes such as avocado yellow curry. For Lumpy Space Princess, that was all she needed to see to decide upon what to order. After sitting down, I comparatively mulled over every word, taking in the traditional options and weighing them against the unconventional ones, such as their Thai herb burger. After much deliberation, I ordered a Thai iced tea, an appetizer of cheese wontons and the “Drunken Noodle.” 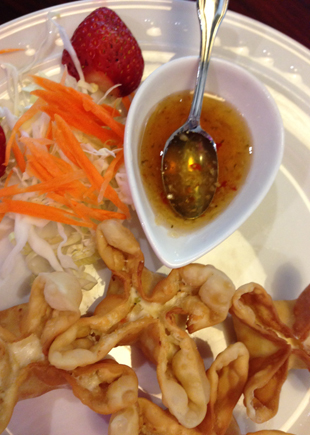 The cheese wontons arrived briskly, and I immediately noted that they had been expertly deep-fried to golden brown perfection and served with a sweet chili sauce. The plating was oh so appetizing until I caught a glimpse of strawberries that were on the verge of rotten, like something still passable to feed your rabbit but not your human family, acting as garnishes on the rim of the dish. Carefully averting my eyes from them, I dug into the wontons, drizzling the chili sauce into the center cavity that cradled the warm, herbed cheese. I smiled at the mouthwatering first bite (and every bite thereafter).

Here’s where things got a little wack. Haley’s avocado yellow curry came out several minutes before my Drunken Noodle and was served with a very awkward explanation that they couldn’t use the avocado they had because it had all turned brown. Haley’s lumpy heart sank—avocado was the reason she’d ordered this, and without it, she was left with a run-of-the-mill yellow curry in which floated potato, onion, carrots and chicken.

Then things got even weirder. As she disappointedly dug to the bottom of the bowl, she scooped out a mass of phantom avocado. She was stoked that there was avocado after all, but the whole situation was a little questionable. I asked her how it tasted, to which she replied, “Creamy, coconut-y and sweet.” It was good. 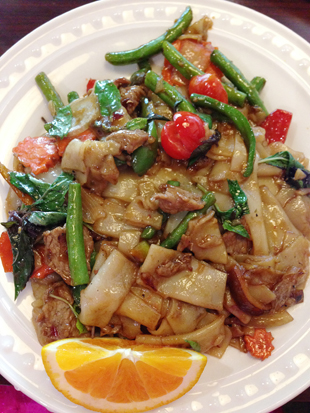 Halfway through her lunch, mine came out of the kitchen—a colorful, steaming heap of my favorite Thai dish, Drunken Noodle. The Coconut Midtown’s take on it used green beans, onion, carrot, Thai basil, green and purple peppers, and my choice of beef. In regards to the vegetables, every bite was cooked differently. Some green beans were overcooked while others were skillfully al dente.

But the mushiness of the noodles made me feel violent. They’re supposed to be a little mushy, but these were so floppy and overdone that they deteriorated in my mouth and had a mealy texture that was not so yummy.

Thai food is like sex. Even when it’s bad, it’s good. So they had that going for them—in spite of being unimpressed over all, I’m not going to lie. I ate it all.

And the space itself was clean, with local art on display. They have a good array of both Asian beer and domestic microbrews. They deliver with a $20 minimum order, which is a stoner’s dream come true. It wasn’t all bad. It just wasn’t that good.

I walked in with high hopes of having nothing but positive things to say about Midtown’s newest Thai food addition, and walked out feeling like I wanted to get a bit Gordon Ramsay on their asses. But all of that said, that was only Princess Bubblegum’s experience, and they do have a lot of good reviews piling up. It’s always tough when you’re a new restaurant to please everyone, and to be consistent as you cut your teeth. I’ll give them another chance after I wash my mouth out with some Thai Basil.