The expression “one trick pony” refers to someone who is only good at one thing. Although it sounds like an insult, I’d prefer a one trick pony to a jack of all trades, master of none—at least the ponies are great at something. My partner in crime Melody, photographer Liz Simpson and I decided to put my theory to the test when we checked out Trick Pony, the brand spanking new Midtown pizzeria that recently took over the old Tuli Bistro location.

We took a seat at the bar in front of the wood-fired pizza oven so we could creep on how the alleged magic happened. We were cheerfully greeted from everyone behind the line and on the floor. “Dang, they really are one trick ponies—there’s only like, seven things to choose from on the menu, and it’s either pizza or salad,” I mused when they handed us menus. They do also serve beer, wine and other non-alcoholic beverages. Mel and I, winos that we are, ordered a half carafe of wine, while Liz grabbed a local microbrew draft. 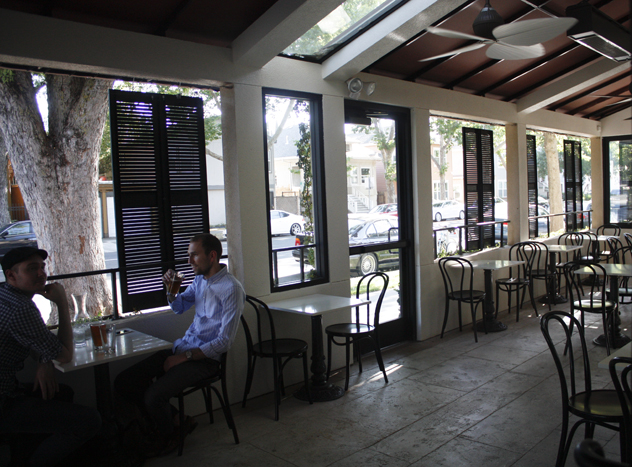 The atmosphere at Trick Pony is comfortable, relaxing and understated, while also having a somewhat contemporary feel. In addition to the bar that stretches along the line, table seating is available inside as well as on their enclosed patio. Fans circulate along the ceiling of the interior to mitigate the heat from the wood fire oven. It was rather empty when we visited, likely due to the fact that they were still in “soft opening” mode. They planned to celebrate their grand opening during June’s Second Saturday.

We were brought four narrow slices of the special to try, a pizza that was topped with San Marzano tomatoes, sopressata, house-made buffalo mozzarella and a house-made cherry tomato and braised leek pesto. The pizza was served with two dipping sauces, both of which were also house-made: a chili oil and a basil pesto. The pesto spread on the pizza had a tangy, savory and sweet flavor profile that was well balanced and scrumptious, and I immediately took note of the fan-fucking-tastic crust. Theirs is a near perfect equilibrium of chewy and crispy, while also managing to be a skinny bitch—thin, foldable, yet sturdy. I was really impressed, and asked the curly-haired ginger chef, Paul Caravelli, what the secret was to this magnificent dough and cooking process that led to some arrestingly good pizza crust. 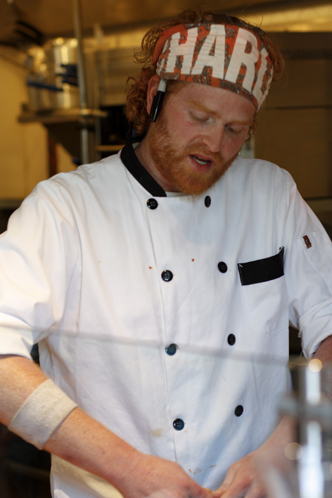 “I haven’t slept in three months,” he joked. But seriously, he added, “I’m obsessed. I’m living that dough life.” He wouldn’t go into too much detail on the recipe itself, but did disclose that he uses a sourdough yeast. The dough is hand-stretched, stored for at least 24 hours and cooked at 800 to 850 degrees Fahrenheit for 60 to 90 seconds.

For pizzas, we elected the Margherita and pepperoni, and also decided to try their take on the Caesar salad. The Caesar salad was served first, and was comprised of red romaine hearts, a house-made Caesar dressing, parmesan crisps (known as frico in Italy, or fried cheese) and shaved parmesan, and came on a plate garnished with the basil pesto and cracked pepper. Eric, the other chef manning the line that day, explained that the Caesar dressing recipe was his own; it had a slightly spicy quality which gave it a unique flavor. 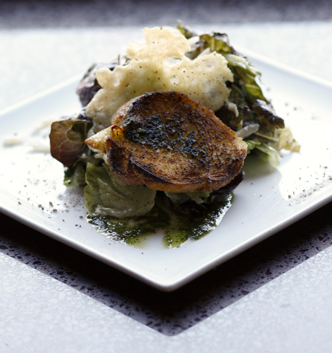 Then we got our pizzas and oh my damn! They were picture-perfect (as evidenced in Liz’s photos), and were not sliced! They schooled us on how that is how true Neopolitan pizza is served—you use a knife to tear your slices out, which eradicates the annoying cheese-falling-off-your-slice situation that often happens when pizza is sliced the way we do things in America.

The Margherita had the same ideal, thin crust and a house-made tomato sauce that was again equally sweet, savory and tangy and made with fresh, local tomatoes. It was also topped with the buffalo mozzarella and fresh basil leaves. The pepperoni pizza was awesome, too, and only differed from the Margherita in that it had pepperoni rather than basil on top, and was a bit spicier.

These guys are really on to something special. Check them out at 2013 S Street—open daily from 5 p.m. until the dough runs out.