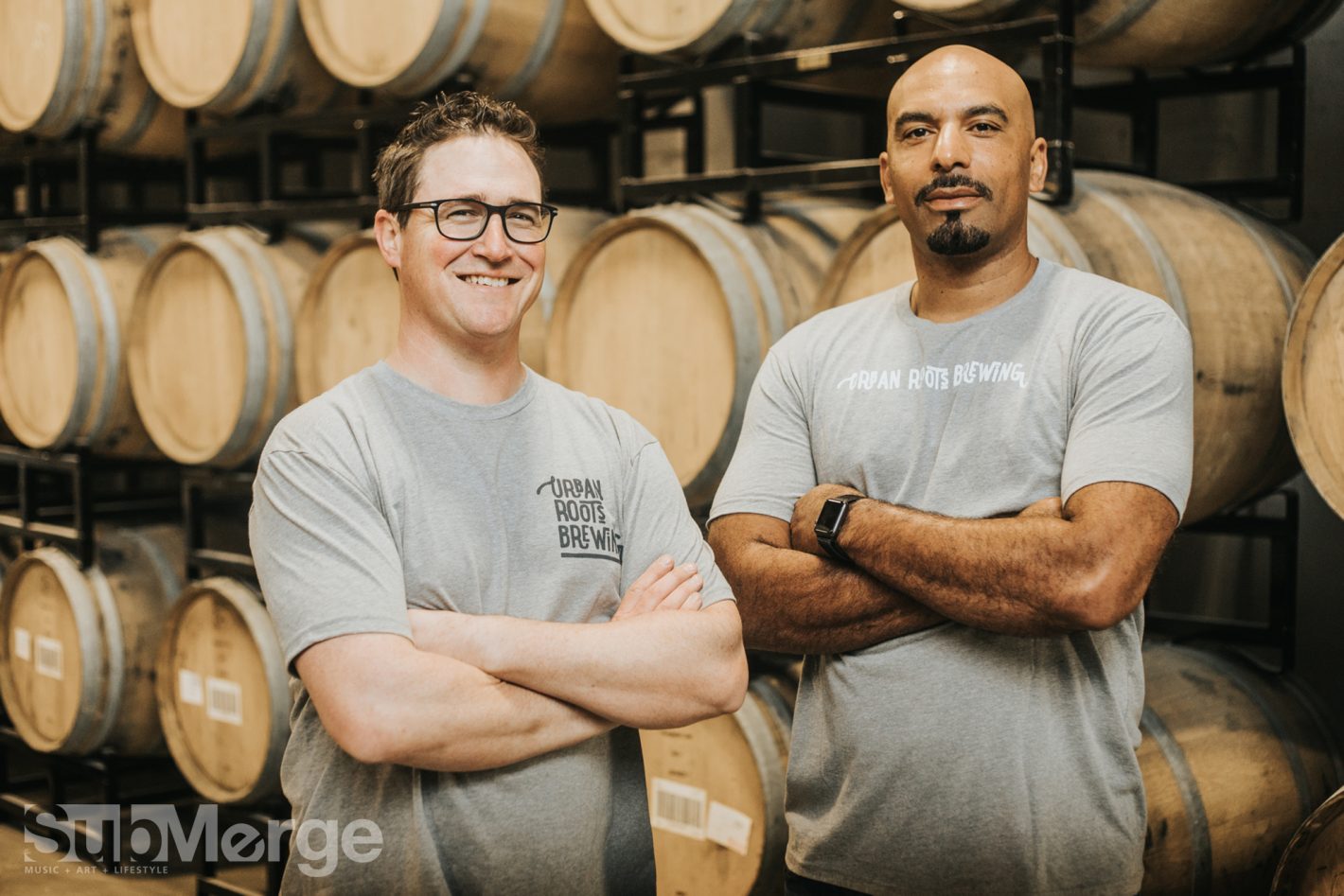 The airy, high-ceilinged building is not yet open for business, but it’s already bustling. As I walked inside Urban Roots, hip-hop blared from speakers, folks milled about random tasks, trees were being planted, visitors came and went. The atmosphere reminded me of the lead-up to a big summer party, those few favorite family members and close friends arriving early to help set things up.

Co-host of the party Rob Archie, who also owns Sacramento favorite Pangaea Bier Cafe, found me wandering and led me on a tour of the grounds, which sprawl some 15,000 square feet. Out on the 2,400 square-foot patio, a biergarten was taking shape, complete with German chestnut trees, an homage to its Deutsch influence.

“Basically, this project was a promise that we both made to each other that one day, we want to do a brewery together,” Archie explained, referring to his partner, Peter Hoey. “Me at Pangaea traveling and curating beers from all over the world and bringing them back to Sacramento, and Peter being a brewer—my favorite brewer.”

Once inside, you can’t miss the massive, jet-black smoker, which fortunately provides plenty of heat, because it blots out the sun.

“That thing does 1,800 pounds at a time,” Archie boasted like a proud father. “It’s like a ferris wheel of meat. I love Texas-style smokehouse, and this is the heart and soul of the place.”

Archie discovered his inspiration for the beer business in the midst of a season playing professional basketball in Italy.

“I fell in love with beer,” Archie told me. “I started drinking craft beer in college, like Karl Strauss. Then I started going back and forth to Europe. Belgium, Denmark.”

Archie took that knowledge and experience with him into his first business venture.

“Opening Pangaea in 2008, I learned to pay attention to simple quality,” he said. “When the economy collapsed it was like, ‘Dude, fuck this five-bedroom house, extravagant vacation, crazy car … I want a great glass of wine. A good meal, good conversation.’ At the time, beer wasn’t what it is now. A lot of people weren’t introduced to, like, Belgian quads.”

Archie took me past the main bar area: eight wines on tap, as well as mirrored beer taps, a dozen each on either side of the bar, so staff won’t have to cross over. Beyond that: booths, standing tables, a beer gallery, and at the back of the room, an open space for a communal table.

“These projects are all about paying homage to the culture of beer,” Archie went on. “Appreciate the game that was given to you. Put your style on it, but also pay respect.”

We ventured to the bowels of the building, where stacked barrels and beer machines reached up to the arcing ceilings. It was here that Hoey finally emerged from his natural habitat—a large metal vat of some kind.

“What this place has always been is Rob and I getting to take our favorite parts of other breweries we visited, other countries we’ve visited, and bring back all the best things that we found and put them all into one spot,” said Hoey. “We wanted the feel and comfort of a British pub in the restaurant, the feel of a German biergarten on the patio. And beers from Belgium, because that’s what we like to drink.”

Hoey is a respected veteran of the beer industry. He’s been a brewer for decades, notably at Sierra Nevada and Sacramento Brewing Company. He’s also spent a sizable chunk of his beer career with BSG CraftBrewing, which supplies breweries with ingredients. 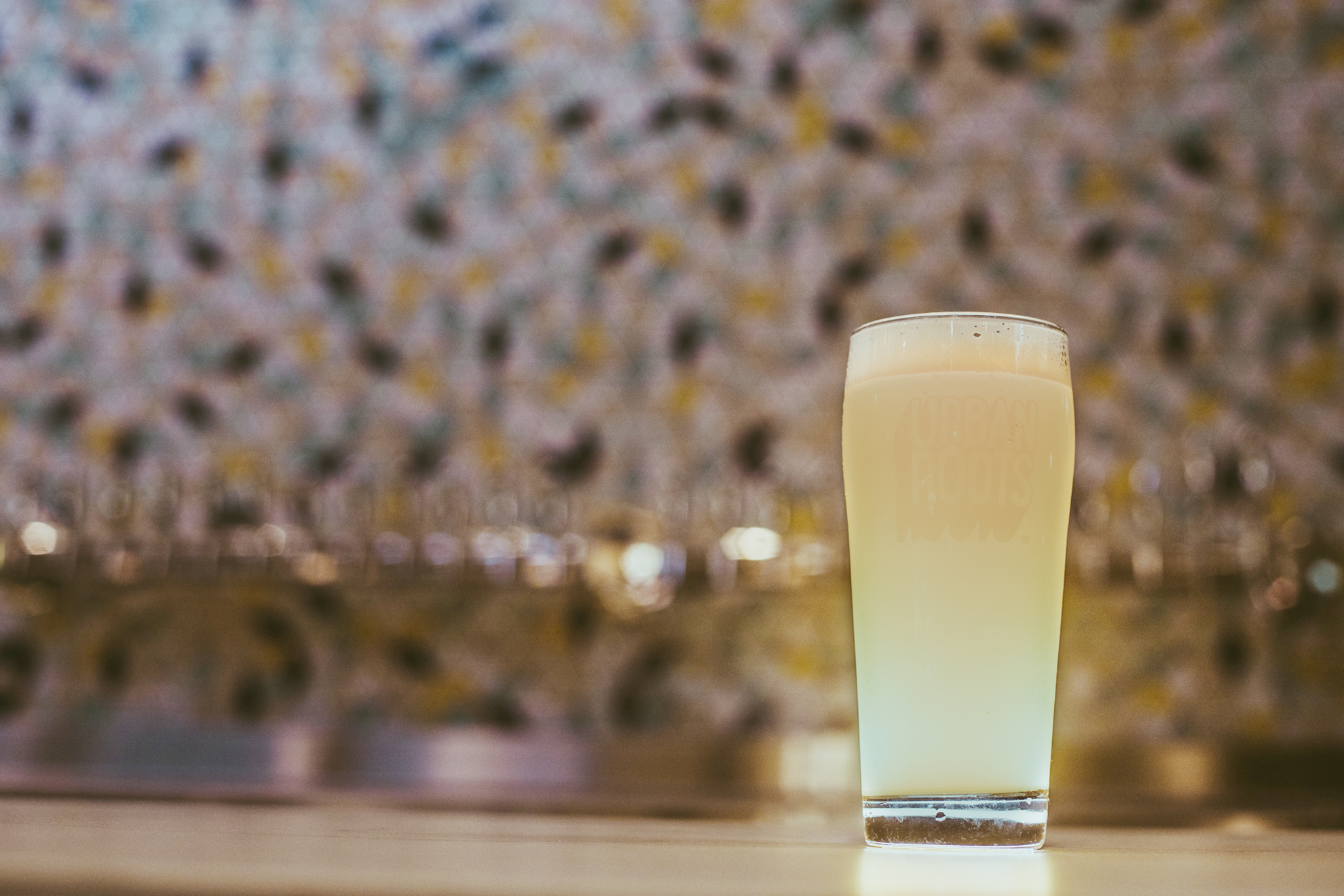 “Peter’s love and my love both are saisons,” Archie added. “Traditional saison and mixed fermentation, which is why the wine barrels are here.”

Hoey has become known throughout the region as the king of the saison, a farmhouse-style ale that is complex, fruity and spicy. But the experimentation won’t stop there.

“If you’ve been cooking a long time, you know how much salt is too much salt to add to the dish you’re cooking,” Hoey explained. “It’s really similar with brewing. I know which hops taste like what, how much is too much, how much is not enough. It’s something you develop after doing it for a long time. I can write a recipe and know what it’s gonna taste like. That’s why I love talking to our chef, because we speak the same language of flavor.”

I’m no chef, but in talking to Hoey and Archie, you get the sense that the beer and food at Urban Roots are very much intended to complement, give context to, and inspire each other.

“It’s all about inspiration,” Hoey said. “With beer styles and flavors it can be as simple as trying a beer and saying, ‘I’d like to make one like that.’ It can be going to a meal and having a crazy dessert and saying, ‘I want to make a beer that tastes like that.’ It can come from anywhere, and that’s the fun part. The general public is so open to new flavors and, in fact, demanding new flavors.” 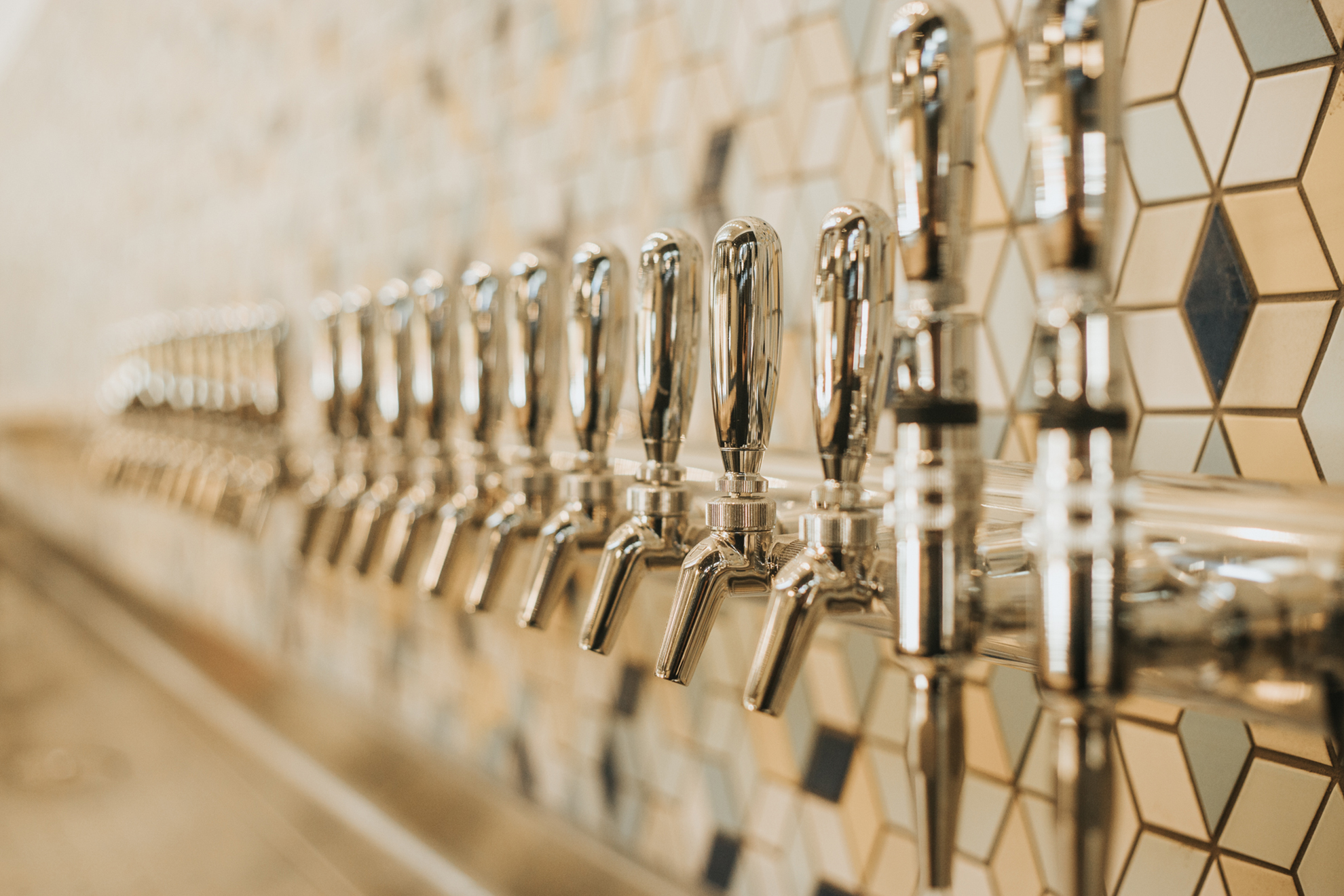 It’s that exact mentality of the general public that has Archie so fired up. “I feel like Sacramento has the best fans in the world. Not only in sports, but they’re very supportive. And it’s up to us to bring them some dope shit. Our challenge as a small business is to bring unique experiences. What we want this place to be is a place that welcomes travelers, and inspires travelers.”

As a city surrounded by so much farmland, Sacramento is an ideal location for breweries, which served to influence the Urban Roots name.

“We’re making farmhouse beers in an urban environment,” Hoey said. “I worked in selling ingredients for so long, I really got to know farmers and ranchers and people growing the ingredients we use. Brewing itself has always been a marriage of agriculture and industry. If you go to a winery, you’re going to wine country, surrounded by vineyards. It’s clearly an agricultural pursuit. Breweries have always been in the middle of cities in industrial areas. People forget that it’s an agricultural product. We need barley, and wheat, and spelt, and grains, and hops, spices, fruit.”

Once everything is under one roof—ingredients gathered, beer brewed, meat smoked—it’s time for the party to start. And the pair are thrilled to throw it precisely at their 1322 V St. location, according to Archie.

“With this project, this is Sacramento,” he said. “It’s under the trees. It’s on the grid. And the building has character.”

Much work remains, but Archie and Hoey’s goal is to open by the end of Beer Week. They’ll continue to sweat and strategize, but by then they hope the fun of sharing their toil with the people of the city will keep them going.

“That’s why I love Sacramento, because I feel like our audience, our guests, they want us to win. Just like with the arena for the Kings. But it’s up to us to win,” Archie said. “We gotta bring that product.” 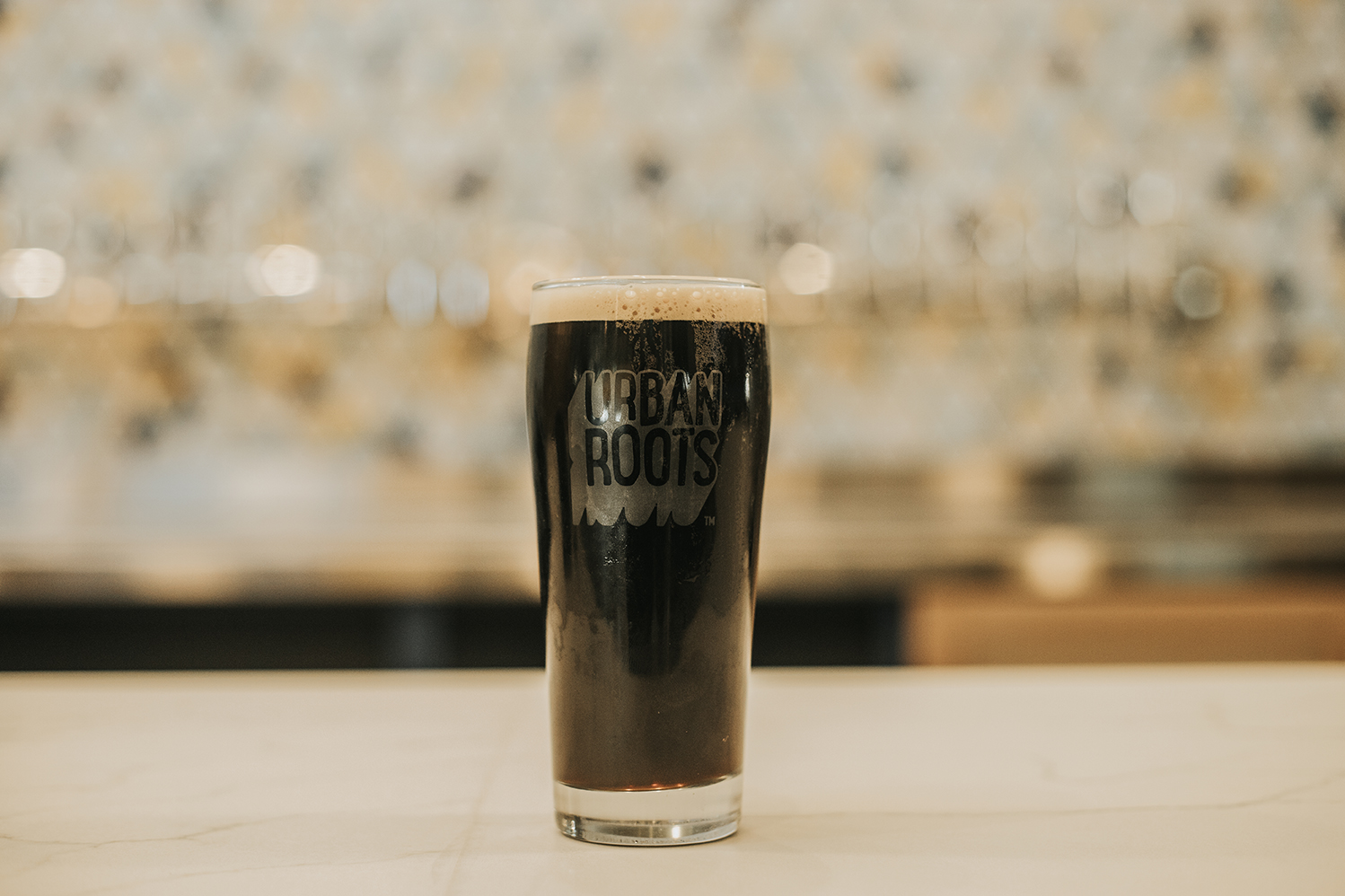 Push To Start, a Mocha Porter

Urban Roots is now open in downtown Sacramento at 1322 V St. To learn more, go to Urbanrootsbrewing.com or follow them on various social networking platforms @UrbanRootsBeer.