Remember, when you were a kid, how awesome it was having a flavored snow cone or shaved ice while wandering around an amusement park or fair on a blazing hot mid-summer day? Well, kind of awesome.

It was really great for the first few bites, and then the neon colored FD&C Red 40 that is blamed for a host of health problems started its descent to the bottom of the container; meanwhile, the ice at the top, now snow white, had all the fun sucked out of it. You ended up eating plain-ass ice, and then bottom-feeding on the nauseatingly saccharine syrup, and you were ultimately rendered a sticky mess. At least the debacle cooled you off and gave you a temporary sugar high.

There’s a right way and a wrong way to do things in some cases. Shaved ice is one of them, and usually it’s done the wrong way. Osaka Ya, Sacramento shaved ice veterans, get the picture and have a line backed up 10th Street all summer.

Enter Vampire Penguin, another ice master. But it’s differentiated from Osaka Ya, in that rather than wait in line and take a snow cone to-go, you can sit in an air-conditioned, cutesy establishment while you enjoy your artistically crafted “shaved snow,” which has all the frills and flavor of an ice cream sundae.

Vampire Penguin first opened its doors on Stockton Boulevard in South Sacramento on Halloween 2013. It quickly garnered copious popularity and needed to spread its flightless wings further to feed the need Sacramento had expressed for VP’s addicting and vegan-friendly shaved snow (they also carry a smattering of other little treats such as macarons).

So in January 2015, locations opened in Davis on G Street and in downtown Sacramento on K Street. Shortly thereafter, the Elk Grove location opened in mid-February. Another location is slated to open in Berkeley soon.

Submerge photographer Evan Duran and I hit up Vampire Penguin’s downtown location on our way to the first pool day of our unofficial summertime, the temperature having exceeded 80 degrees. It was a perfect day to sample the snow. We poked around the lengthy counter area to see all the goods, scoped the menu and decided on four different items to share.

The snow itself is unlike any shaved ice I’ve ever tried. It’s closer to sorbet, sherbet or ice cream in texture. Even my 9-year-old son, an ice cream connoisseur, said it tasted just like ice cream. To me it’s the missing link between shaved ice and sorbet—fluffy yet dense, and very much like eating newly fallen snow.

How did you come up with the menu and concept for Vampire Penguin?
Shaved ice has been around for a long time. What I hated about it was the ice would always be crunchy and the syrup would always pool up at the bottom. We thought, why not infuse the flavor in the block before you shave it, and then shave it finer so it’s not crunchy? And so we ran countless experiments, tried out numerous combos along with fresh fruits and other toppings to come up with inspired presentations. The concept and menu just naturally evolved as we grew. Each combo actually has a backstory, but they are all scattered in little manifestos and will take some digging to find. 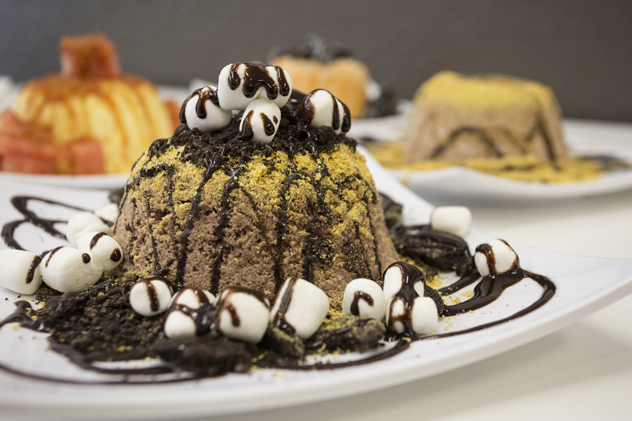 How do you make the shaved ice? Its texture is unlike any shaved ice I’ve had before—almost like ice cream!
Proper technique and execution, and lots of trial and error!

The Mexican Candy is my favorite. What was the inspiration for such an awesome and unconventional mix of flavors?
Love Mangonadas! We thought it would be cool to deconstruct it and translate it to shaved snow.

How do you foresee Vampire Penguin growing in the future? Expanding the menu, more locations, etc.?
I definitely want to keep growing, covering all of Sacramento before the end of the year. Our Berkeley location is opening in about a month and half, and we are looking to cover the Bay Area as well. Menu-wise we have new flavors coming out around summer, like black sugar, lychee and mocha. I also want to expand on the desserts side of the business, branding popular baked goods and putting our own twist on them.

What are some of the challenges you’ve faced as a company so far, if any?
The primary challenge we continue to face is being able to sustain our growth, but I think we all face that challenge in one form or another.

What has it been like to enjoy such rapid growth for the business?
It’s definitely interesting—I am nervous, scared, anxious, and paranoid at the same time as calm, collected, excited, and having fun. I am also very grateful, but always impatient.
This is my first business, and we didn’t think our first store would be received so well. We would have lines out the door, and it was challenging to keep up with the demand. This propelled us to focus on building a strong team and to create systems and adjustments with the goal of being able to provide the highest quality of service. Every day is a learning experience, and we do have ambitions of growing bigger in the next couple of years.

As things begin to really heat up in the Sacramento area, you know you’re going to want to gorge yourself on frozen treats. Check out Vampire Penguin online at Facebook.com/vampirepenguin916 for updates on menu items and other tasty tidbits.